(Editor’s Note: The following review has done its best to divulge as little as possible about Spider-Man: Far From Home. If you want to know nothing about it, wait for the movie. We don’t know what else to tell you.)

The Pitch: Call it Sony’s Spider-Man 8 (including Into the Spider-Verse), call it Tom Holland’s Spider-Man 2, or even nickname it Spider-Man: European Vacation. Holland, as Peter Parker, returns in director Jon Watts’ second consecutive feature, Spider-Man: Far From Home.

For the five people that haven’t yet seen Avengers: Endgame, Peter is still reeling over that film’s major fatalities. The general population is similarly dealing with the aftermath of “The Blip,” or Thanos’ temporary elimination of half of humanity. Were they dead? How is Peter feeling about having been a ghost? It’s all very solemn, with a hint of joking; this is still a Spider-Man movie. Then again, that preamble makes for about five minutes of exposition before the real story kicks in: Peter’s goin’ on a gondola, baby! That’s right: mourning and existential crises aside, he’s also excited to go on summer vacation in Europe with his science club, and maybe even admit his true feelings for MJ (Zendaya) along the way.

Ah, but then there’s a super-sized snag. Many snags, as a matter of fact, when supreme beings called “Elementals” begin tearing up property around the world. A cragged Earth monster destroys a Mexican town. A water monster reminiscent of the Spidey comics’ Hydro Man splashes Venice. And a molten beast is set to microwave the Czech Republic. Peter happens to be on the scene for the water attack, is immediately picked up by Nick Fury (Samuel L. Jackson), and soon finds himself paired with a new and totally unvetted hero named Quentin Beck (Jake Gyllenhaal), or as the Italian press dub him, “Mysterio.” 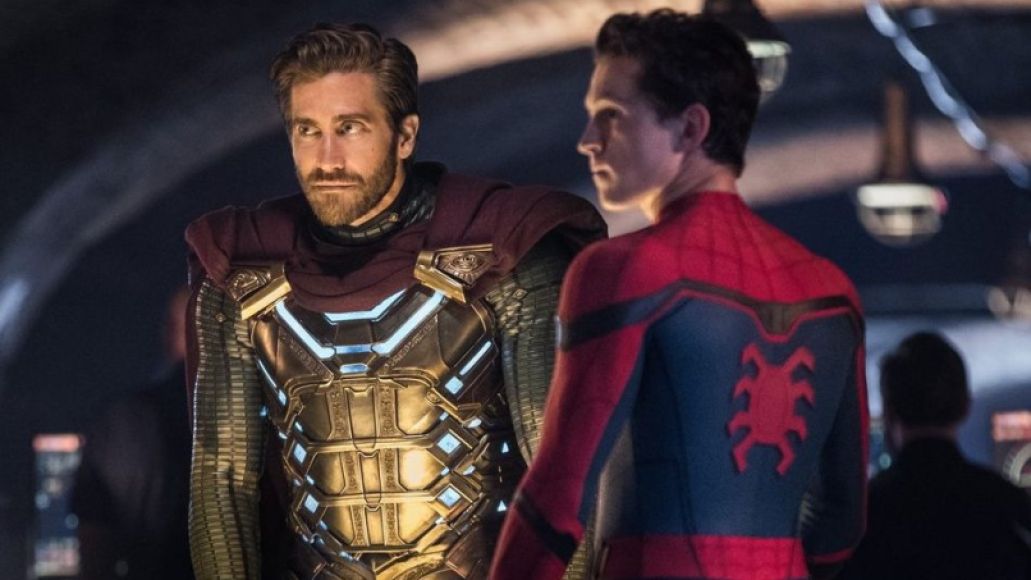 Worldwide Web: Sequels can be sticky, because they inevitably lack the element of surprise that makes first chapters so much fun. Spider-Man: Homecoming felt like a clean slate after the overwrought Amazing Spider-Man 2. The 2017 reset had an abundance of pluck, and Holland lent that movie a lot of its charms, overeager though they sometimes felt. Watts had the will to try silly new ideas, to scale down to a relatively more intimate academic setting, and the project benefitted from clean and witty effects layered atop cohesive setpieces. By contrast, Far From Home comes off a bit like watching Quantum of Solace after Casino Royale, or X-Men Apocalypse after Days of Future Past. Far From Home tries to do more, more, more of what worked the last time, and the film suffers as a result.

Peter has to juggle grief, play, and dazzling rescues at any given moment, and the film weighs itself down by trying to snare too much within its web. Tony Stark (Robert Downey Jr.) is gone as the parental motivator, and Far From Home can’t decide throughout if Peter’s new “dad” is Nick Fury, Mysterio, or Tony’s main chauffeur Happy Hogan (Jon Favreau). Peter globetrots with his classmates and gets into multiple skirmishes, but it’s all set dressing for expensive creature battles. There’s no creative use of the various overseas settings for a unique, distinctive setpiece, each Elemental a quick pitch based on recognizable landscapes. Oh well. Tourism can wait.

But must the overall experience feel like a speed-run, offering neither immersion in the locations nor any major expansion on Peter’s abilities? Far From Home is a girthy effects project that makes no meaningful use of its locales. Wouldn’t it be funny to watch a through-and-through New Yorker like Parker grapple with foreign countries and cultures? (He only does in one late scene that doesn’t amount to much.) He’s just there to bat at CG creatures and look flustered. And those creatures, and the CG behind them and so much of the rest of the film’s action, become a chore to follow before long. It’s a Gestalt nightmare, reaching Mummy Returns levels of over-stuffing the frame. More CG doesn’t always mean better CG, and the muddy visuals create an adverse effect.

Situation Comedy: Jabs at easy comedy aside, there are still some great gags amidst Far From Home’s sturm and drang. But perhaps that’s why its most affecting stuff comes from the comedy. You don’t need a computer to deep-fake decent young actors behaving awkwardly around one another. Watts got his start through Onion TV, and writers Chris McKenna (Community) and Erik Sommers (American Dad!) have backgrounds in solid TV comedy. The broad comedy is what connects best, and it’s achieved through characterization.

The trio build up a cast of durably silly side characters like Martin Starr and JB Smoove’s hapless chaperone teachers, and Tony Revolori’s preening Flash Thompson. There’s the foil Brad (Remy Hill), a suddenly attractive bro angling to screw with Parker’s romantic plans. And of course, there’s Ned (Jacob Batalon), arguably the teen spirit and soul of these two new Spider-Man movies, who actually looks and acts like this is play. Enjoy his naïve deception of classmates to cover for Pete, or his affectionately dumb perspectives on wooing European women. And when he gets excited for Peter’s theatrics, as Spider-Man hops across poles like Buster Keaton atop a river, we almost get there too. (For the record, Ned deserves his own sitcom. He’s so game, and such a gifted sell for preposterous situations and left-field jokes.) This little group of people in Peter’s world are positively Simpsonian, and they really help to offset the film’s digital splattering. 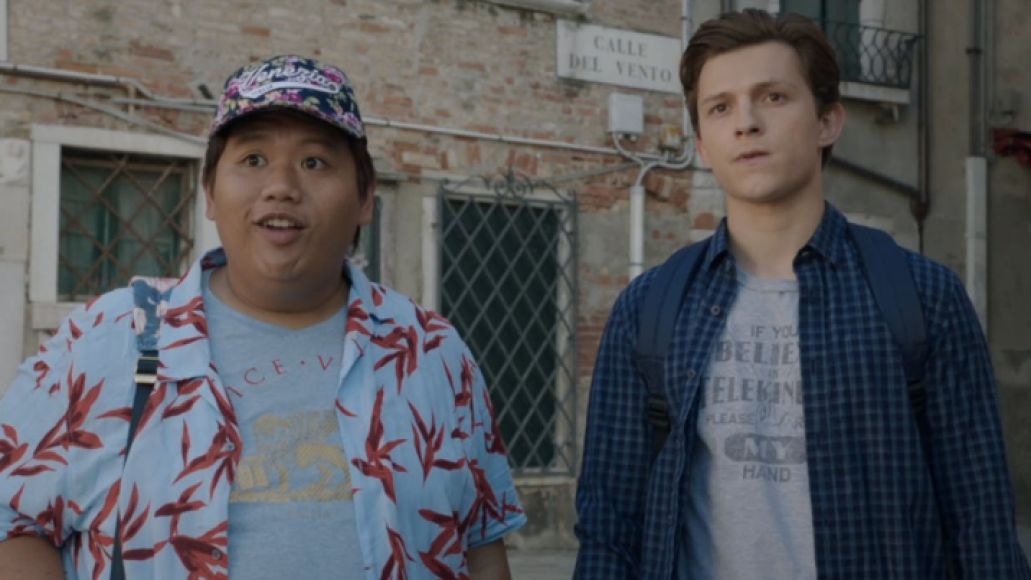 Mystery? Oh: Let it be known, without spoilers, that there are epic plot holes in the film’s back half. Watts could cross-cut nimbly in the last entry; here, the editing is a blitzkrieg. But we can’t really talk about those annoyances meaningfully yet, because of this present cultural moment in which spoilers are held sacred. Any comic or movie fan worth their salt had already worked out some of this film’s surprises the second character names were announced. But because of the code of maintaining illusion, or surprise, or whatever you want to call it? We can’t explain why Far From Home is a mess in the back half, we can only allude to it.

If you’re willing to come back, say in a week, and chat in the comments? That’d work just fine.

The Verdict: At seven films inside 18 years, the fear of franchise cobwebs is always real for Spider-Man. How many times can Peter Parker save New York? How many camera angles can we find from which to shoot a guy swinging like Tarzan through the canyons of Manhattan? The best Watts could come up with for a replacement was a Eurotrip episode in the sitcom adventures of Spider-Man. Cool new backdrops. Same old Spidey problems and hijinks. Between the highs of Spider-Verse and the lows of Spider-Man 3, Far From Home lands smack-dab in the middle, content to repeat the joys of the last hit.

Where’s It Playing? Everywhere beginning July 2nd, right next to that cash-grab re-release of Endgame.