The Pitch: Tom Hanks’ Woody and Tim Allen’s Buzz Lightyear are living in a post-Andy era with Bonnie (Madeleine McGraw), the sweet little girl that adopted them in the last movie. But as the years have passed, Bonnie has proven to be a different kind of kid than Andy. Buzz, Jessie (Joan Cusack), Mr. Potato Head (the late Don Rickles), Rex (Wallace Shawn), Slinky (Blake Clark), and most of the old favorites are still in rotation. Yet Woody seems to be stuck in the closet far more often than not. Horse opera’s retrograde these days, after all.

The Toy Story movies to date have served as exemplars of family storytelling, blending humor, heartbreak, sticky situations, and themes of growing pains. Toy Story 4 is no different, but it’s even busier than previous installments. In this adventure, Woody accidentally aids Bonnie in the creation of a new favorite toy named Forky (Tony Hale, with full Buster Bluth neuroses), becoming a de facto dad in the process. Meanwhile, Bonnie’s family gears up for a road trip, and the toys pass through a small town with a traveling carnival and an antique shop.

It’s at the shop that Woody runs into his old flame Bo (Annie Potts), a now-emancipated toy free to roam without a child. Woody also must negotiate with Gabby Gabby (Christina Hendricks), a ‘50s doll with an aura of longing and mannered malice about her. Plus there are new characters like a pair of plush toys with the voices of Keegan-Michael Key and Jordan Peele, Keanu Reeves having the time of his life as Canadian stuntman toy Duke Caboom, cameos from Mel Brooks and Carol Burnett … my goodness. And the jokes, the sight gags, the little zingers? It’s all pretty terrific. 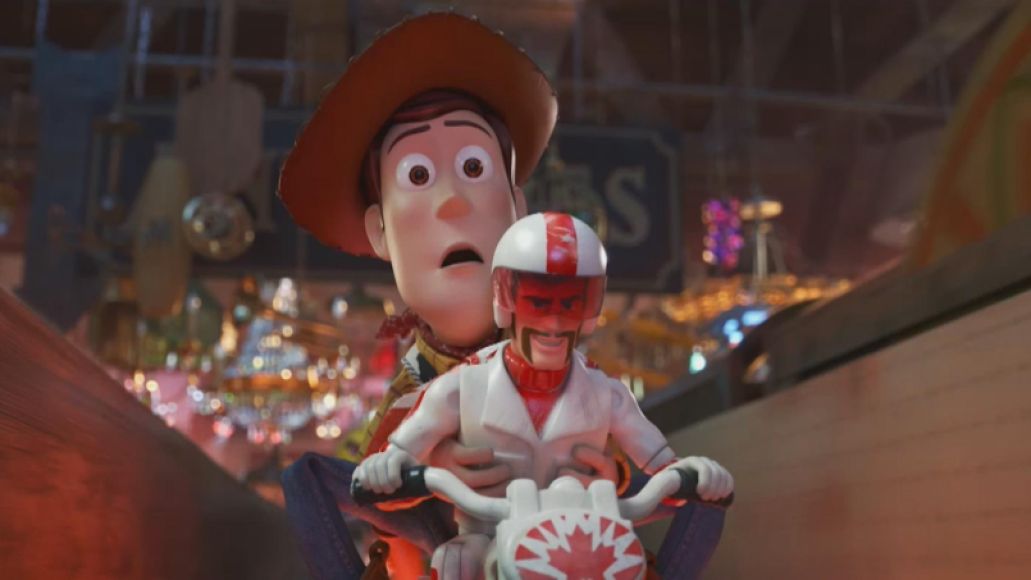 Pixar Power: To be blunt: Toy Story 4 is critic-proof. The Disney monopolization of content is in full swing, and Toy Story 4 is a guaranteed smash IP with a massive built-in audience. Proven fans of the 25-year old franchise (some now bringing their own children, funnily enough) will see this baby and be satisfied no matter what the toys do. But thanks to Pixar writers Josh Cooley (Inside Out) and Andrew Stanton (Finding Nemo, Wall-E) working their magic, Toy Story 4 still manages to find joy in newness. New ideas, new sights, new humor, and new dramatics. And true to the series’ ethos, this is filmmaking as play, confidently balancing its game of cartoony chess.

Old characters manage to affect the things audiences have always liked about them, all while finding new wants and fears, such as Woody’s anxieties over his feelings of uselessness. Duke Caboom, while silly by design with his accompanying “Oh, Canada” music, still manages to sneak in a sense of lament as he tragically recalls his owner’s disappointment in Duke not being as exciting as the commercials. There’s also the joy of going to the fair without getting gunk on your feet. The fears of parenting, empty-nesting, growing up. And, of course, the feeling of having fun with your toys, so much so that you don’t want the time to end. The film moves in all of these meaningful directions by its end, nuanced and as heart-wrenching as ever.

Talking tough, and we’re trying our best in a mostly glowing review, but there’s really not much to protest here. Perhaps the running gag about Buzz Lightyear’s “inner voice” dumbing his astro-dude down? Didn’t he become grounded and not give in to flights of fancy after the first movie? Or what about the lack of screen time for some of the continually growing cast of characters? Or when the movie’s resolution dropped to 240p out of nowhere? (Just kidding on that last one; this is Pixar, and it’s every bit as lavish as that name promises.) All things considered, most complaints would be simple pettifogging for what’s otherwise a parade of great ideas and good vibrations. 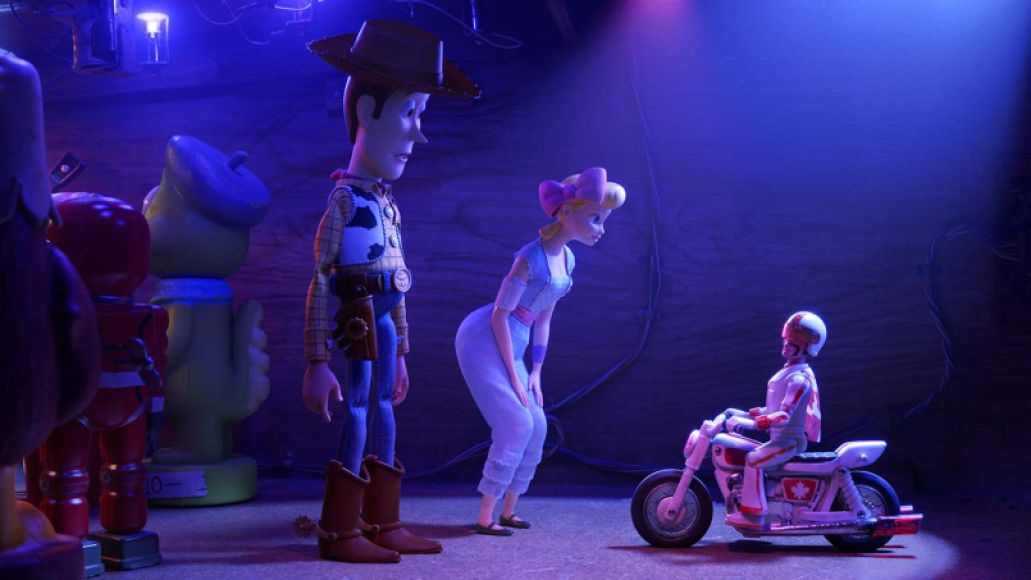 Home From the County Fair, by Norman Rockwell: Go to YouTube for just a second, and look up clips from the first three films. It’s wild seeing what quantum leaps the animation has taken between each entry. That’s not to say the old ones look bad — the innovations of the original endure — but looking at Toy Story next to Toy Story 4 is like comparing Sock Puppet Theater to Norman Rockwell.

The antique shop is designed like a mix of The Shining and the ballroom in Beauty and the Beast. One minute there’s the creeping dread of an old shop’s cobwebs, electrical outlets and narrow shelves. The next, those spaces are offset with dazzling chandelier displays and stained-glass color schemes at a dusty micro-level.

You can see the rubber bumps on an old Godzilla, and appreciate the quality control in rendering. Buzz and Woody’s heads have never looked so plasticine … at least until the next movie. And the store and its surrounding carnival play within small town Americana, a kind of nostalgia that fits Toy Story 4’s themes of obsolesce and change.

Simply put, it’s quite the looker. Greetings from the Grand Basin, when you get there. 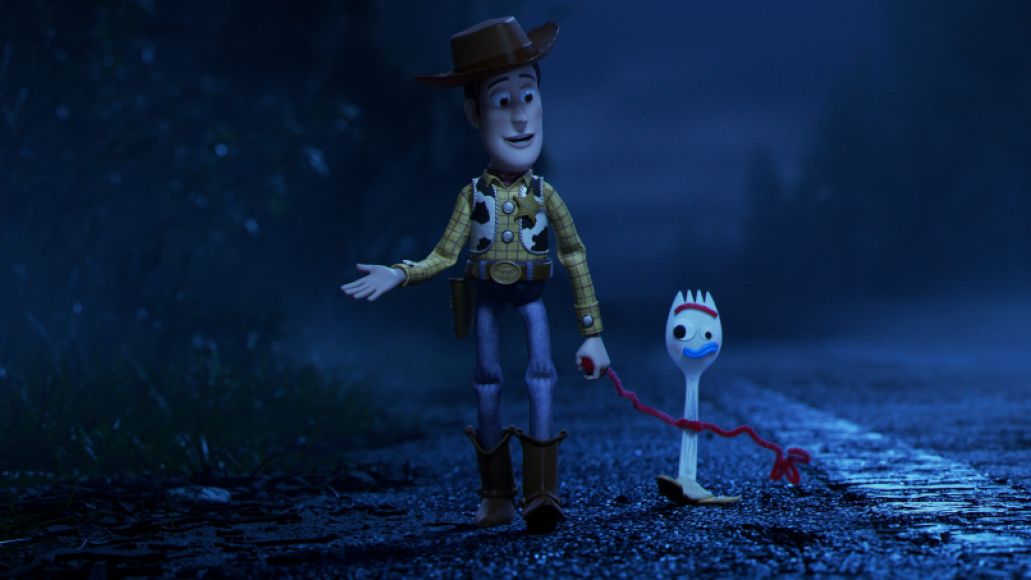 Parent Trap: One of the movie’s most ambitious new themes is parenting. Woody’s little stunt with Forky is an act of trying to help a child that goes far less smoothly than he’d hoped. It’s Bonnie’s first day of kindergarten, she’s about to lose it, and Woody gives Bonnie supplies from the trash to create Forky. The reasons are well-intended, but like rearing a child, the creation doesn’t go precisely as imagined.

Forky keeps retreating to the trash. He doesn’t understand concepts like, um, existence. He’s like a two-year old, constantly opening cabinets and perpetually in danger of hurting himself. Woody must protect him at all costs, for Bonnie’s sake. At one point, Woody suggests wearily that he didn’t think it would be so hard, and the sentiment is universal. It’s Toy Story 4’s best new idea, an age-appropriate one played up for gags and aches alike.

The Verdict: While the novelty will never be the same as it was the first time 24 years ago, curiosity and invention continue to be displayed in full force in the Toy Story movies. How’s this for praise: I left smiling. And that really counts, sometimes. In short, you get it. Seriously. You know the formula and frankly, it’s one of the best-working ones Hollywood still has: a fun-for-the-whole-family film. In a current market crowded with franchises and pricey theatrics, Toy Story 4 feels like a warm and welcome aside, spinning an epic yarn from an intimate vantage with all the amenities of Pixar’s supremely talented creators and animators. They’re still taking care of their toys with everything they have.

Where’s It Playing? To infinity and beyond, starting June 21st. If any of the last few Disney tentpoles are any indicator, this will be on over 4,000 screens. Like, Dumbo opened on 4,200 screens. This will be everywhere.

Film Review: Toy Story 4 Grows Up with Its Fans