A little over a month ago, Game of Thrones came to an end with a much-discussed finale, effectively (or ineffectively) wrapping up the decade-long hit show. With much of the dust settled following the vitriolic public reaction to season 8, HBO has announced it will release all eight seasons in a limited-edition Blu-ray™ box set.

In addition to around 75 hours of the hit show’s episodes, Game of Thrones: The Complete Collection offers a slew of bonus content. Most talked about is the Game of Thrones: Reunion Special, a two-part show that brought together fan-favorite actors from across the series during a live taping in Belfast. In addition to season 8 heavy-hitters like Kit Harington (Jon Snow), Emilia Clarke (Daenerys Targaryen), and Sophie Turner (Sansa Stark), actors who played dearly departed characters like Sean Bean (Ned Stark) and Jason Momoa (Khal Drogo) will also make appearances. Weirdly enough, Conan O’Brien served as the reunion’s host, because why the hell not?

Of course, the box set will also feature more typical fare. It promises all-new deleted and extended clips, plus behind-the-scenes features, audio commentary, animated histories and lore pieces. Game of Thrones: The Last Watch, a documentary by filmmaker Jeanie Finlay, will also be included in two parts. The Complete Collection will be packaged in a wooden shadow box case reflecting the show’s narrative art and designed by Robert Ball, who also drew the “Beautiful Death” series of posters depicting major deaths throughout the series. It will all come locked in place with a Hand of the King pin clasp.

Watch an unboxing of the set and a preview of the reunion special below. You can pre-order the box set here.

Game of Thrones: The Complete Collection is due out on Blu-ray™ on December 3rd. HBO will also simultaneously release the eighth season of the program on Blu-ray™ and DVD. 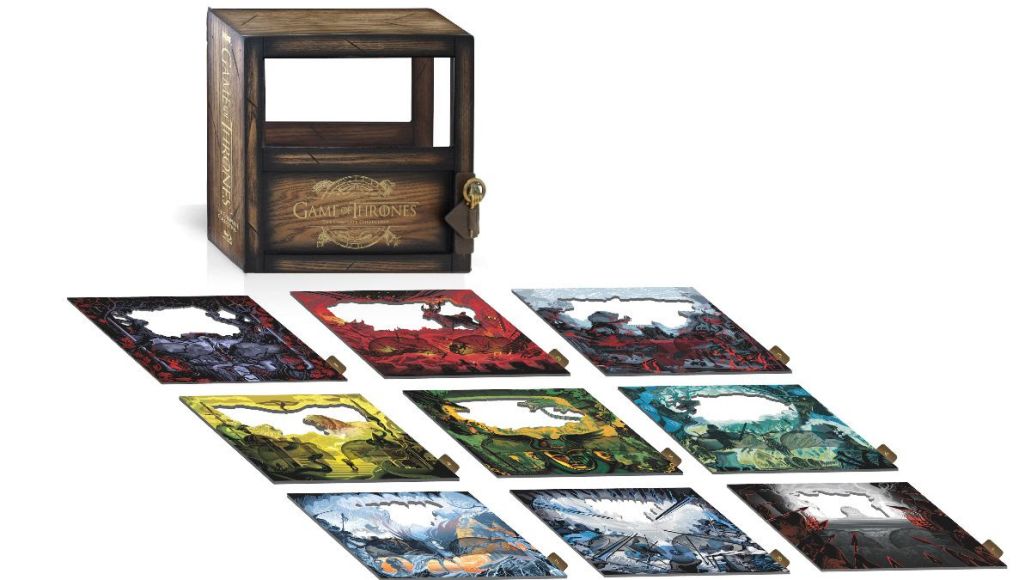 Game of Thrones: The Complete Collection Blu-ray box set due out in December