Unbearably Cold: “This is the first time I’ve heard the word genocide in a pop song,” says my Lyft driver Alfredo, who’d pulled up This Is Vampire Weekend on Spotify after figuring out why I was headed to the Huntington Bank Pavilion on Chicago’s Northerly Island. We hadn’t done much talking, our ride through the evening grey accompanied only by the sound of Ezra Koenig and “New York, Jerusalem, Berlin”. The bittersweet ode to missed opportunities that closes Vampire Weekend’s Father of the Bride played on through the tinny speakers of the Toyota.

Alfredo was right; the song did seem like a particularly grim way to usher in what should’ve been one of the most-circled entries on Chicago’s summer concert calendar. That was mostly down to meteorological realities: Sunday night was maybe the cruelest episode yet in this Chicago summer’s sustained failure to launch, and easily one of the coldest Father’s Days in recent memory. By the time I arrived at the venue, temperatures hovered in the mid-’50s, and fog hung low along the lake, eating the tops of the skyscrapers in the distance.

It was a far different scene in Chicago the last time Vampire Weekend came through town. The band broke a four-year absence from the American festival scene with a sweaty late-summer set at Lollapalooza last year. If you recall, they famously made the public premiere of songs from their latest album via iPhone and aux cord during a sold-out aftershow at the Metro later that same evening.

Those shows were powered by anticipation: Would the departure of founding member and studio ace Rostam Batmanglij leave the band with a creative vacuum to fill? How would newfound touring members like Brian Robert Jones and Greta Morgan make their marks on the material? Could the songs of Father of the Bride, made during a studio layoff that stretched for nearly half the band’s career to this point, really be worth the wait? 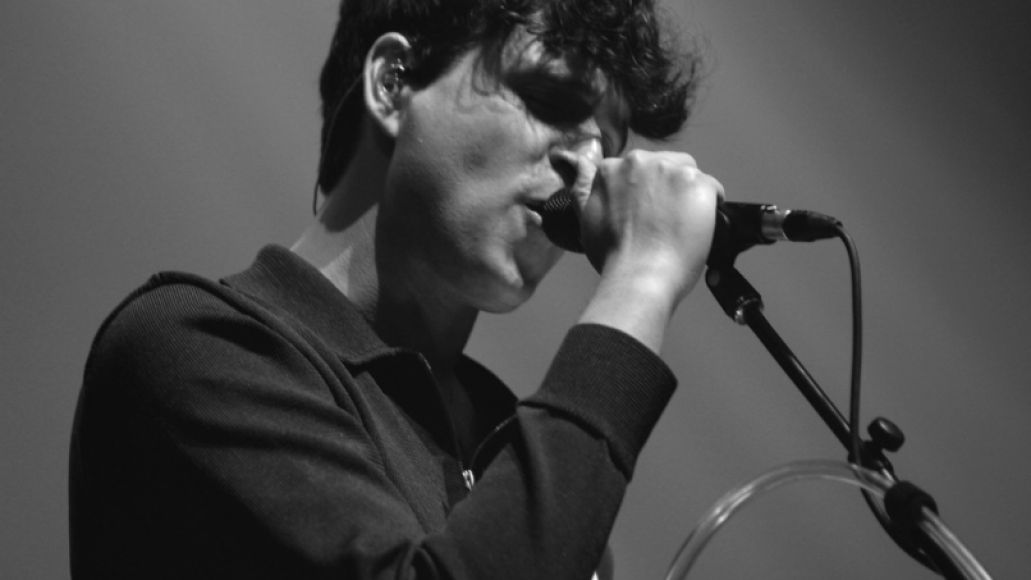 Jerusalem, New York, Chicago: By Father’s Day 2019, we had some answers. The split with Rostam remains amicable and uncatastrophic; the new live lineup adds both delicate depth and surprising heft to the band’s new live arrangements; and the songs of Father of the Bride make up one of the best records of 2019. That record’s triumphant sonic maturation (which added “Touch of Grey”-era Grateful Dead to their long list of influences) resulted in Vampire Weekend’s third Billboard No. 1 album in a row and a sense that their latest tour might have the makings of a victory lap.

As it turns out, the Chicago portion of that lap was on the uphill portion of the track. By showtime, the cold left the crowd shivering in a sea of North Face jackets and $17 tallboys of Lagunitas, prompting one more crucial question: How in the world was Vampire Weekend going to wake these people up? “By playing Vampire Weekend songs” isn’t the sexiest or cleverest answer, but it’s definitely the correct one. Thus, even as they opened with the new-but-deep cut “Bambina”, the band’s collective energy seemed focused on burning away the mist with sheer pop radiance alone. Though muffled by sockcaps, the audience’s heads bobbed accordingly 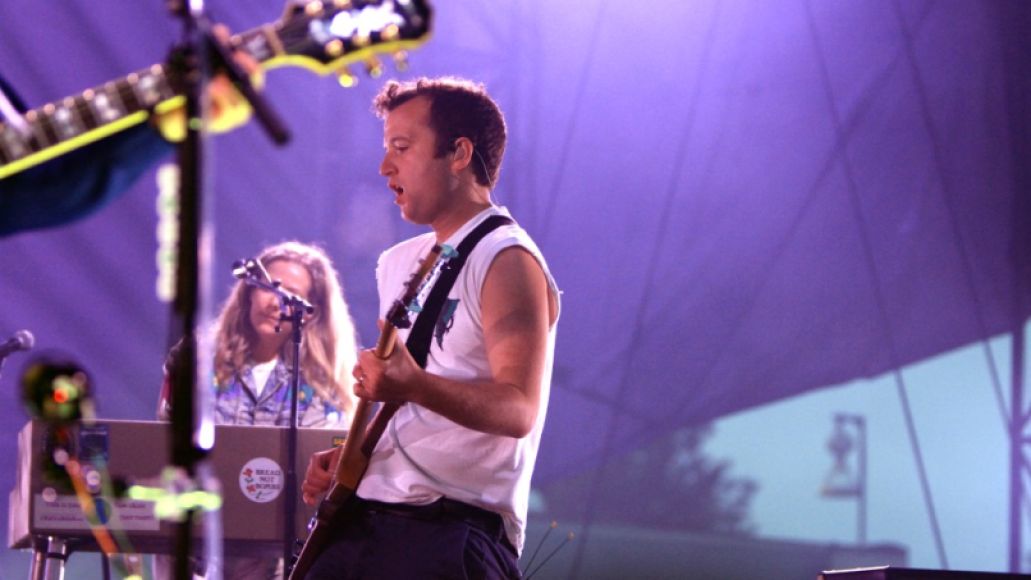 Not-So-Obvious Bicycle: Vampire Weekend has always excelled at turning in record-perfect renditions of their most popular songs. No fan who’s willing to sit outside in the cold is going to turn down the chance to sing along to “Cape Cod Kwassa Kwassa” or “Unbelievers”, even if those songs sound basically unchanged from the versions they have at home. The deeper thrills came when Koenig and company veered a little off-script. Like when the band accessed their dub side for an extended breakdown of “Diplomat’s Son” that shifted into and back from Toots and the Maytals’ 1970 classic “Pressure Drop”. Or when they turned their semi-cover of SBTRKT’s “New Dorp. New York” into a strobing hard-rock freakout worthy of the Edgar Winter Group.

The power behind that particular song (which, for reasons still unbeknownst to me, left the audience around me in complete and tepid silence) came largely from the work of Jones, the band’s secret-weapon guitarist and the best case yet for their expansion to a touring seven-piece. Clad in a kaleidoscopic tie-dyed sweatshirt (appropriate, after two days of Dead & Company shows at Wrigley Field), Jones displayed a chameleonic understanding of the band’s catalog, shifting effortlessly from the finger-plucked riff that drives “Harmony Hall” to the jangle of “Oxford Comma” and improving things with every move. 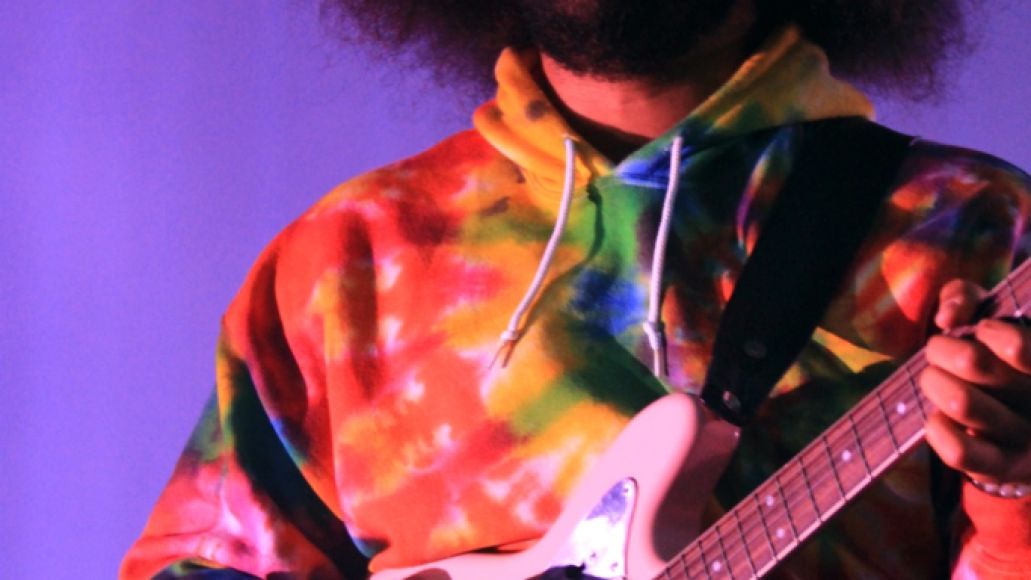 Jones’ greatest heroics (and perhaps the highlight of the night from a pure performance standpoint) came during “Sunflower”. After starting the song with a face-to-face guitar duel between himself and Koenig, Jones commanded the rest of the Father of the Bride single, morphing it from its familiar pop state into a spare breakdown, a fuzzy classic rock solo, and a fully progged-out conclusion that showed off more muscles and brawn than anything in the band’s recorded catalog. One dude at the end of my row even threw the horns. In a way, it was the most perfect Father’s Day song of the night, a potential favorite for any dad who was an adult in, but does not fully remember, 1979.

Of course, no amount of guitar heroics can save a show like this from a little mid-set sagginess; after a faithful cover of Paul Simon’s underrated One-Trick Pony single “Late in the Evening”, the set downshifted into a pensiveness from which it nearly didn’t recover. On a different night, the winter brooding of new tracks like “Unbearably White” and “Hold You Now” might’ve landed differently; here, they mostly reminded people that they were wearing scarves in June. 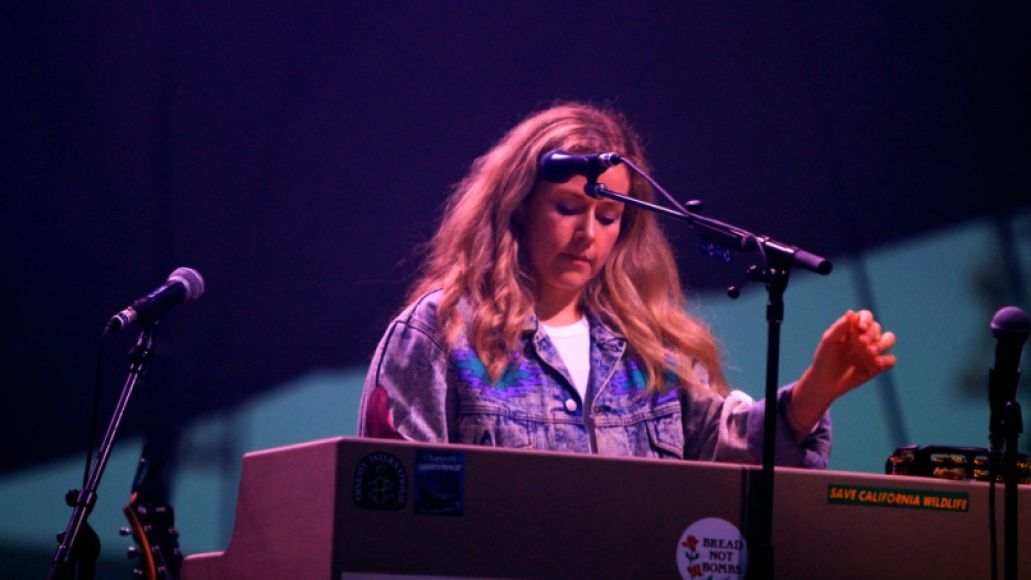 Summer Snow: The cold never fully won, though, thanks in large part to the catharsis of the back catalog that unlocked the crowd’s collective second wind. The show’s back third was littered with the frenetic booksmart indie-pop hits that once graced many a home-burned CDr, and the highlight was the same as Lollapalooza’s. It may not have been the threefer that we saw back in August (or location-exclusive jams like Indiana’s Parks and Rec theme or St. Louis’s ramshackle “Gloria” cover), but Vampire Weekend’s back-to-back renditions of “A-Punk” cemented the night’s late upswing in energy.

It gave them a new running joke for Chicago shows to come in the process. It also gave them the latitude needed to stick their main-set closer. Unlike the melancholy songs I’d heard on the drive hours earlier, this night’s extended jam of “New York, Jerusalem, Berlin” exuded tenderness, with Will Canzoneri’s piano giving the whole thing the exuberance of a soweto song reimagined by the Vince Guaraldi Trio. 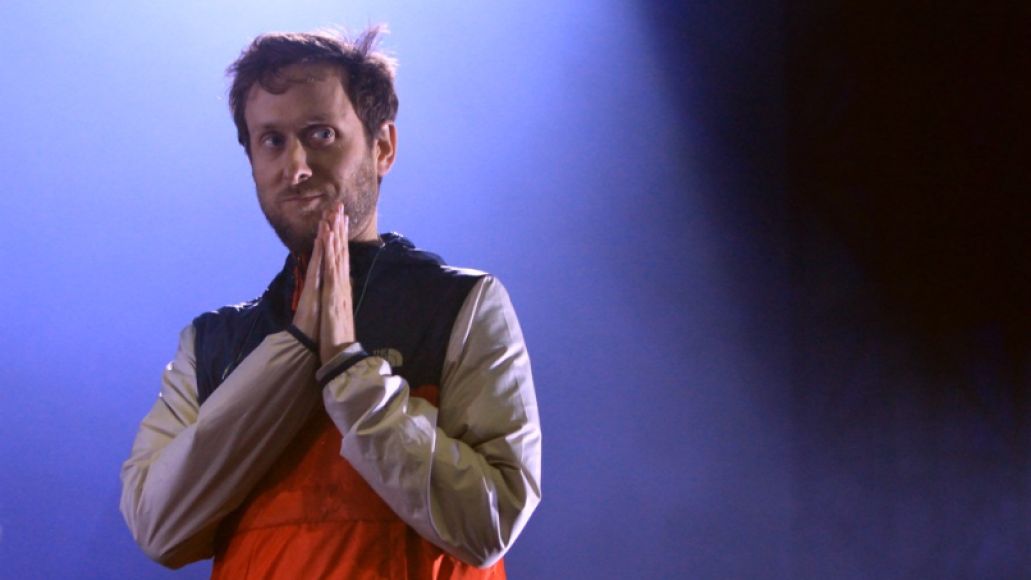 I Think Ur A Fan: Despite that late score for the new stuff, older songs dominated the encore; on this tour, Koenig’s been taking requests (exclusively, it seems, from people wearing bucket hats) towards the end of the night, and Chicago is the first city to draw its choices entirely from the band’s debut.

“Boston (Ladies of Cambridge)” and “One (Blake’s Got a New Face)” delivered certified rave-ups, but the band but saved its best moment for the very end. There’d been intermittent dancing in the aisles throughout the night (mostly confined to spirited segments of “This Life” and “Harmony Hall”), but once the globe-spinning world music vibes of “Ya Hey” ended and the opening keys of “Walcott” began, all of that pent-up energy finally had someplace to go. 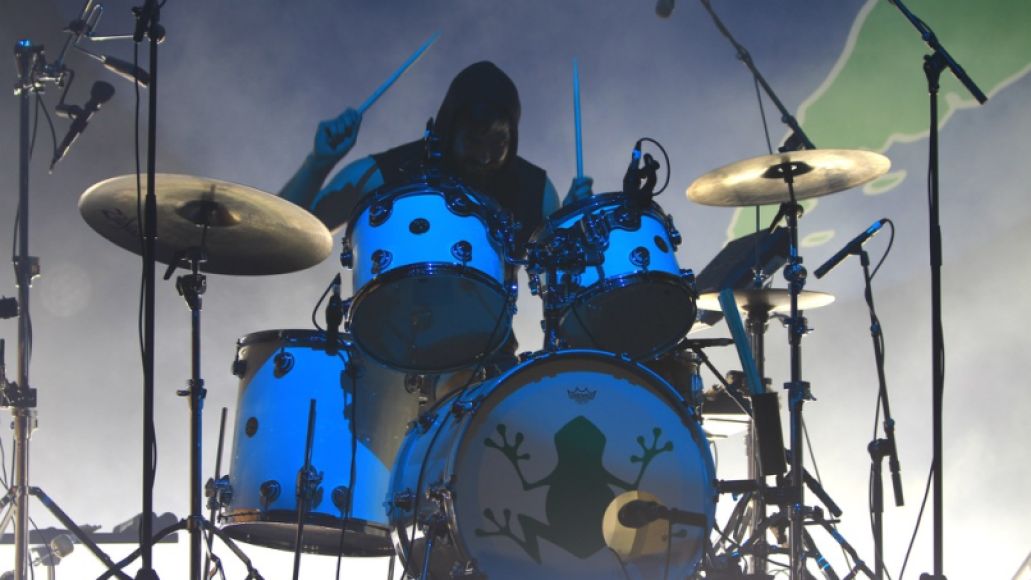 We Belong Together: As I made for the gates, I was surrounded by motion, from the up-stretched hands of the older NPR couple in front of me to the jubilant flails of a gaggle of normcore kids tight two-step of a man and a woman who, in that moment, could really only see each other. It was the best kind of unabashed Breakfast Club freak-out, one that even sent many people skipping and twisting and singing along as they too filed out. It was the first truly perfect summer concert moment of the night, and it came just in time. For most people in attendance, that’ll be the lasting memory. When you’re dancing yourself out into the darkness, it’s hard to remember that you’d ever been anything other than warm. 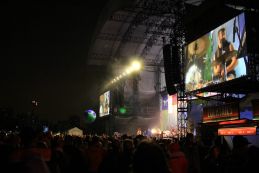 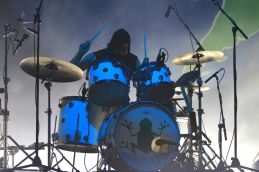 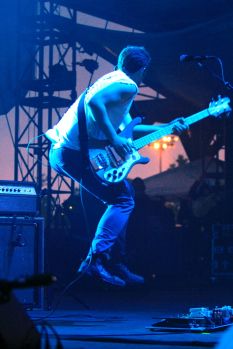 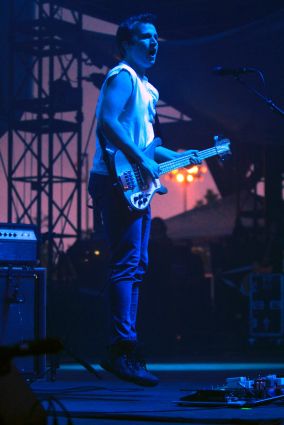 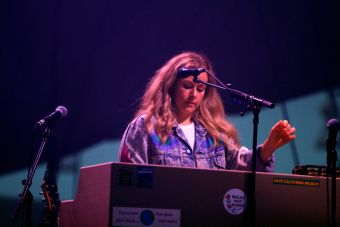 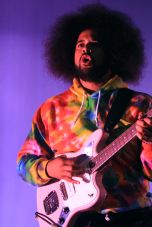 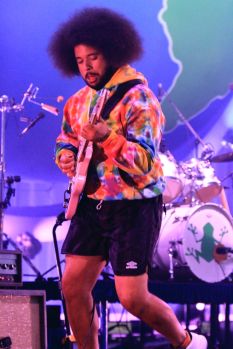 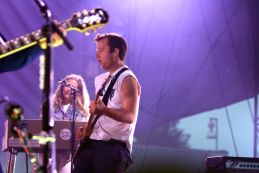 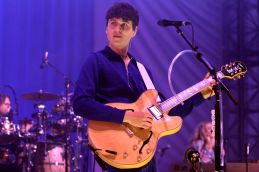 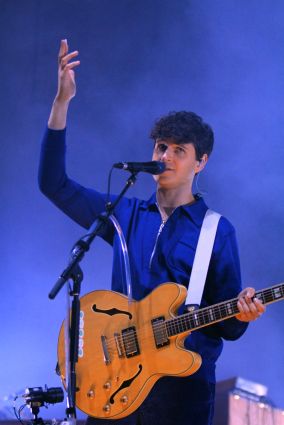