ASAP Rocky may be in police custody in Sweden, but that’s hardly stopped him from being the fashionable badass that he is. According to police documents, when authorities questioned the rapper about other aliases and nicknames, ASAP Rocky actually listed “pretty mother fucker” as one of them.

“Yes. Rocky, Asap Rocky, pretty mother fucker, I can’t think of any more,” the Harlem-born MC reportedly told investigators, according to The Blast. 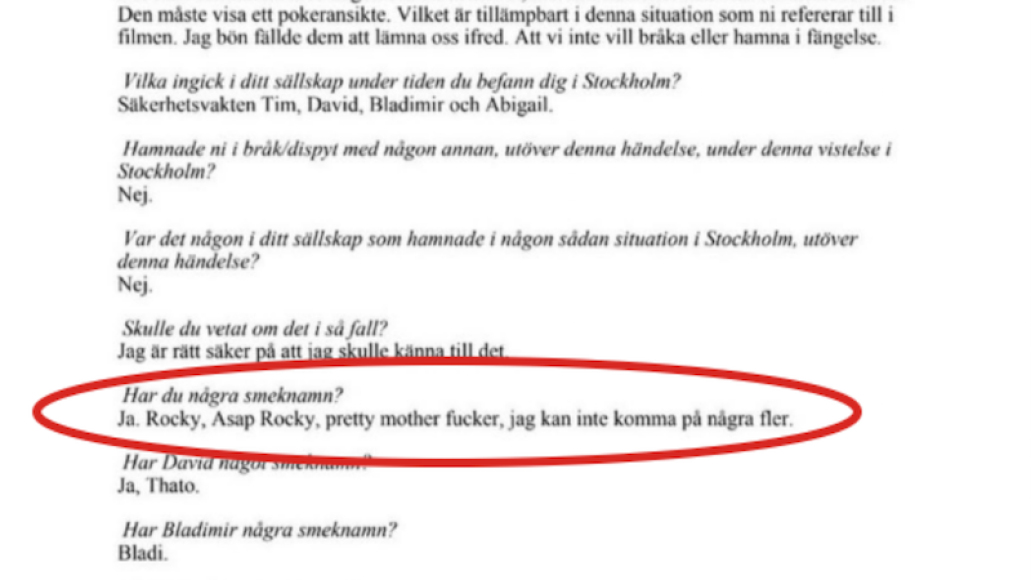 On Thursday, the rapper was formally charged with assault following a street altercation in Stockholm earlier this month. In video footage of the brawl, Rocky can be seen violently throwing a man to the ground. He and his entourage then appear to punch and kick the man several times while he is still on the ground.

ASAP Rocky say his actions were in done self-defense, claiming that the man and his associates were the aggressors of the incident. In the same report about his nicknames, the rapper provided further context for his self-defense argument.

The ASAP Mob member told officials that he is “paranoid of all strangers. I’m a celebrity. I’ve had unfortunate events in my past.” He then referenced a 2016 incident in New Zealand in which he was jumped on an elevator.

If convicted, ASAP Rocky could face a maximum of two years in prison or a fine based on his daily earnings. Swedish authorities’ decision to move forward with the charges came despite Donald Trump’s best (worst?) efforts to bully Sweden and pleadings from power couple Kanye West and Kim Kardashian.

During A$AP Rocky's hearing today in Sweden he was asked if he goes by any nicknames.