Despite its starry cast and subject matter, Drop Dead Gorgeous was far too weird to ever become a mainstream hit in 1999. Compare it to Miss Congeniality, which hit theaters a year later. Both take on the pageant world and the occasional murderous backstabbing that comes with it, but where the two films diverge is the degree to which they lean into the eccentricities of that world .  Drop Dead Gorgeous leaned in much harder and suffered critically and commercially as a result. Miss Congeniality, on the other hand, plays on cable almost every other weekend thanks to its breezier, lighter tone. Both films are funny, but a lot has changed in the last 20 years, including comedic sensibilities, and the absurdities that made Drop Dead Gorgeous flop in 1999 are now the backbone of most comedy — mainstream or otherwise.

The film lures you in with a false sense of normalcy by opening with a glitzy introduction to the Sarah Rose Cosmetics American Teen Miss Pageant hosted by none other than Batman’s Adam West. Before West can finish speaking about the glories of pageants, a crappy VCR recording of the opening credits of Days of Our Lives cuts him off. Suddenly, it’s 1995, we’re in a high school gymnasium in Mount Rose, Minnesota, and as we’ll soon come to find out (like, literally, in the first five minutes of the movie), the people who live here are odd and blithely unaware of it. What else would you expect from a town whose claim to fame is — as the outdated welcome sign announces — being home to the World’s Oldest Living Lutheran? (She’s dead, by the way.) 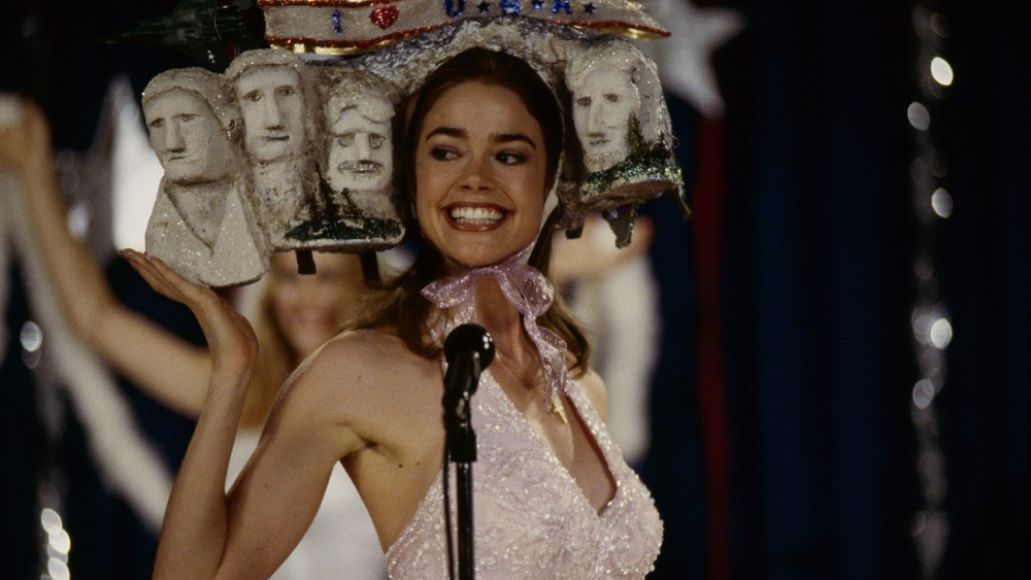 It’s the rivalry between poor but plucky Amber and the wealthy, calculating Becky Leeman (Denise Richards), daughter of pageant coordinator and host Gladys Leeman (Kirstie Alley, in one of her best roles) that’s the main focus of the film, offering a subtle yet sharp examination of classism and the ways wealth or lack thereof affects the trajectory of people’s lives. The contrast between Amber and Becky couldn’t be more stark. Amber lives in a trailer park with her beer-swilling mother Annette (a fabulous Ellen Barkin) and pseudo-aunt Loretta (national treasure Allison Janney), and dreams of following in the footsteps of her hero, Diane Sawyer. To make ends meet, she works in the school cafeteria and applies makeup to corpses at the local funeral home which allows her to work on her tap routines (“I’m so lucky to have an afterschool job where I can practice my talent”).

Meanwhile, Lutheran Sisterhood Gun Club president Becky, who brags “Jesus loves winners” (and perhaps predicted the real-life rise of similarly gun-obsessed, young, conservative white women who now draw ire on social media with such proclamations), lives in a huge house and swans around town with a confidence that only comes from having every privilege in life. Amber may not have money like Becky, but she has real talent and drive, or as Loretta notes, she’s the “best damn tapper, and the most smartest!” This makes her a serious threat to the Leemans, who plan on going all the way to nationals and will do anything — including murder — to stop those who get in the way. 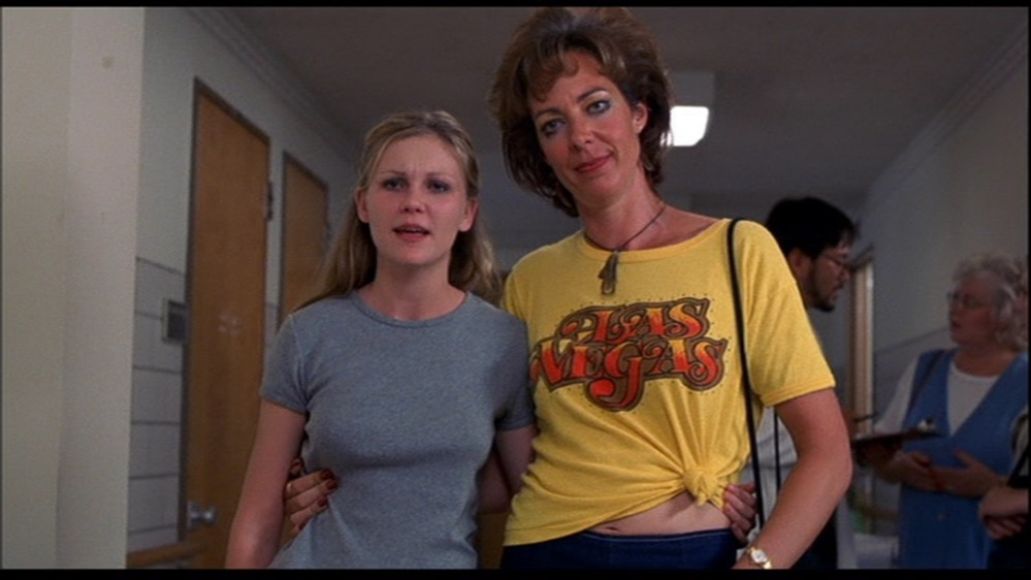 Unlike many beloved comedies of the ’80s and early ’90s which have become nearly unwatchable in 2019 due to racist, sexist, homophobic, and/or transphobic humor, Drop Dead Gorgeous mostly avoids these pitfalls by mining its humor from the characters, location, situations (like making the girls talk about what makes them proud to be American in increasingly ridiculous and/or phallic headpieces during the pageant), and its insanely quotable lines. That’s not to say every part of the film has aged well. Ableist jokes make several scenes (most featuring a character played by actor Will Sasso) especially cringeworthy — and not in a good way. The film is funny enough on its own as a satire of pageants, small-town America, and social classes that these moments of punching down are not only unnecessary, but the only real missteps in an otherwise entertaining, smart comedy.

However, the film does straddle the line — or recently re-painted patriotic sawhorse, if you prefer — between trash and camp, though thankfully, it’s often both. Nowhere is this more apparent than in Becky’s talent portion of the pageant. Inexplicably wearing a tight pink sweater and rhinestone poodle skirt like Sandy from Grease a la Toddlers & Tiaras, Becky launches into a performance of Frankie Valli & The Four Seasons’ “Can’t Take My Eyes Off You” while wheeling around a life-sized Jesus doll on a Crucifix. It’s horrifyingly awkward, hysterically funny, and utterly profane. In essence, it’s what Drop Dead Gorgeous does best. It’s funniest when it lets its characters — and it’s important to note they are mostly women — be their absolute worst and/or oblivious selves. 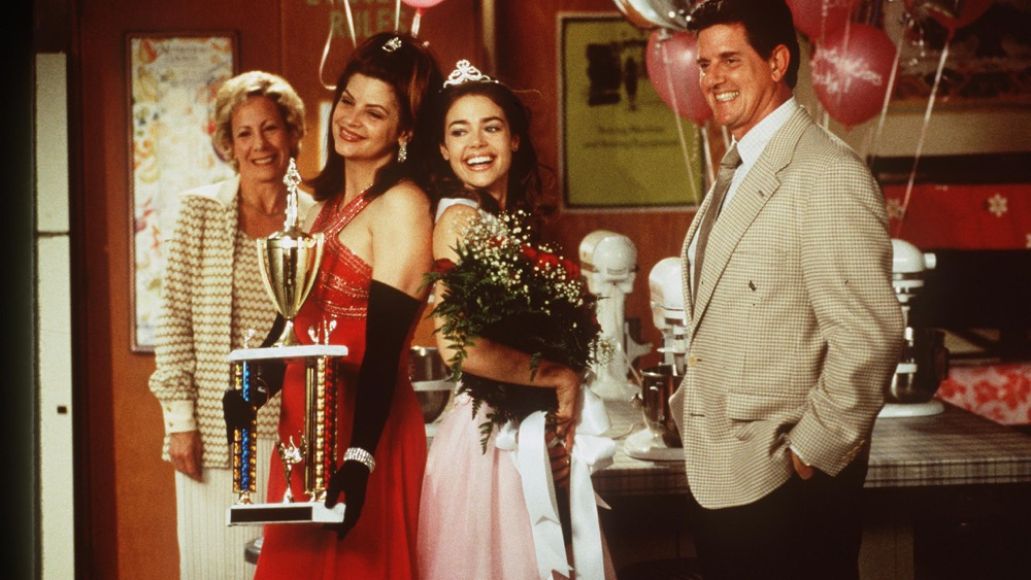 With that in mind, Drop Dead Gorgeous is probably closest in kin to Waiting For Guffman, Christopher Guest’s 1996 mostly improvised comedy about a group of community theater actors in the fictional town of Blaine, Missouri. Both films are mockumentaries full of quirky people with exaggerated Midwestern accents who take their artistic efforts a little too seriously as small-town folks are wont to do when there’s not much else to occupy free time.

In a lot of ways, Corky St. Clair’s “Red White & Blaine” musical really isn’t all that different from Gladys Leeman’s patriotic pageants (“USA is A-Okay! People ask me where I get this. I don’t know, it’s maybe a gift from God or something.”). These two self-appointed impresarios relish being big fish in small ponds, but their over-sized ambitions and egos quickly and hilariously derail their respective dreams.

In Gladys’ case, her hopes and dreams literally go up in flames when the victory float — ironically, a giant swan — carrying Becky catches fire and explodes, and Gladys’ involvement in the murders and injuries of the other contestants is finally revealed. It’s these deliciously unexpected violent twists that ultimately set Drop Dead Gorgeous apart from its predecessor, taking the humor to darker, stranger places than Guest and company ever dare go. 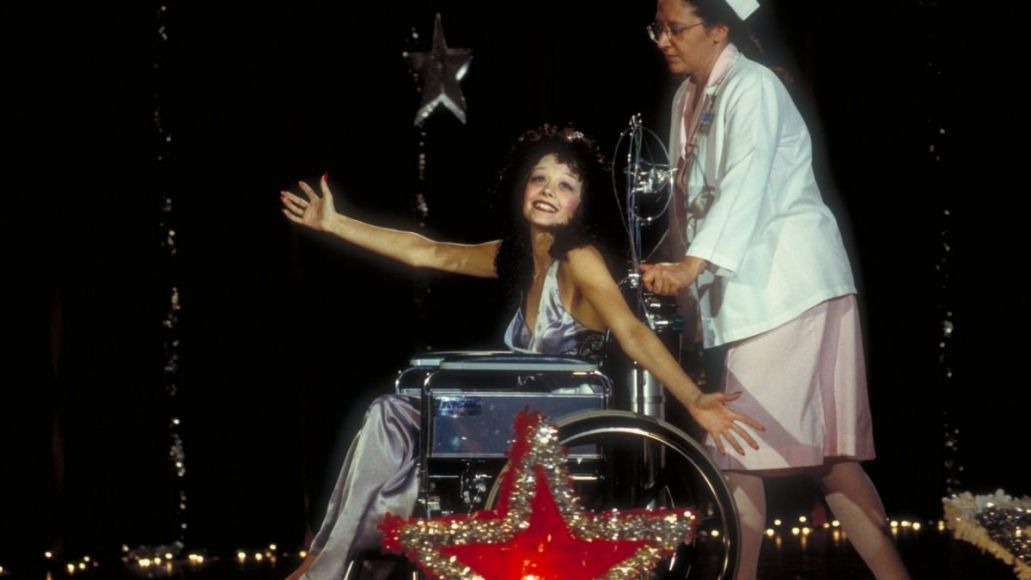 And other films followed suit. Wet Hot American Summer, another off-kilter, low-budget comedy — this time, satirizing 1980s teen summer camp culture — fared no better than Drop Dead Gorgeous at the box office when it hit theaters in 2001. But it too became a cult hit. Full of famous faces and soon-to-be-famous faces, the comedy featured everything from a talking can of green beans to a camper with telekinetic powers. Napoleon Dynamite arrived in 2005, dividing audiences and critics alike with its deadpan titular character who has a backyard full of llamas in Idaho, wears moon boots, and has a serious thing for tater tots. Both of these films are also about terrible and/or painfully clueless people who have dreams bigger than they can ever realistically attain, but it’s hilarious watching them try anyway.

By embracing its own oddities so joyfully and fearlessly, Drop Dead Gorgeous helped set the stage for the current era of comedy where we now wholeheartedly celebrate these types of self-aggrandizing weirdos. Characters like Moira Rose on Schitt’s Creek with her untraceable accent and rotating collection of wigs or Selina Meyer on Veep who passive-aggressively schemes her way to the Oval Office. Even the creepy St. Paul Pork Products commercial seen in the film — featuring middle-aged former pageant queen Connie Rudrud smiling in a blood-spattered apron against images of factory processed meats— could just as easily be one of Tim Robinson’s sketches from his critically acclaimed Netflix series I Think You Should Leave. We take it for granted that we have so many oddballs now to make us laugh when just 20 years ago, it was a rarity.

It would have been unthinkable back in 1999 that the things that made Drop Dead Gorgeous feel so deeply transgressive (like women being gross and weird) would become so mainstream. But comedy is, after all, mercurial — both shaped by and shaping our worldview. It stands to reason that as our world has grown more absurd in the last 20 years, comedy has followed suit, blurring the lines between satire and reality. Maybe in 1999, Drop Dead Gorgeous was always doomed to be runner-up, but in 2019, its weird humor takes the crown.