The Pitch: Imagine a land populated by lone-star celluloid studs and long-haired hippie freaks. A place filled with wall-to-wall radios, smooth yellow Cadillacs, pistols, kung fu, and the kind of excessive drinking and drug use that can only be seen as “the norm.” This ain’t the Midwest. This is an unbelievable land, where Sharon Tate (Margot Robbie) is alive and well, bouncing between bookstores and theaters. A place where Charlie Manson (Damon Herriman) is also real, but still merely a whisper and an unknown danger.

Westerns aren’t quite passé on the airwaves, but gun-toting modern fare like Mannix and The F.B.I. are starting to look hip. And that’s ignoring the fact that Easy Rider is just over the horizon, because the biggest mainstream movie hits still feature Dean fucking Martin. This is Rick and Cliff’s world. Rick Dalton (Leonardo DiCaprio) and Cliff Booth (Brad Pitt), to be exact, a once-mighty TV actor and his forever stuntman (or platonic life-mate, really). It’s their happening, and they’re just ambling about town both wearily and a little weirdly.

Welcome to Hollywood, 1969, or more specifically Quentin Tarantino’s hallucination of a Hollywood from 1969. A time when the old guard was on its way out, and the nuts were set loose. It’s Tarantino’s shot at a nostalgia flick, and his purest rumination about the movies to date. It pops, it snaps, and it contorts in wild ways, and for the bedeviled director, it’s like an act of affected hypnotism making you really believe this is the place. This is where we want to be, right now. Ready? Because we’re rolling. 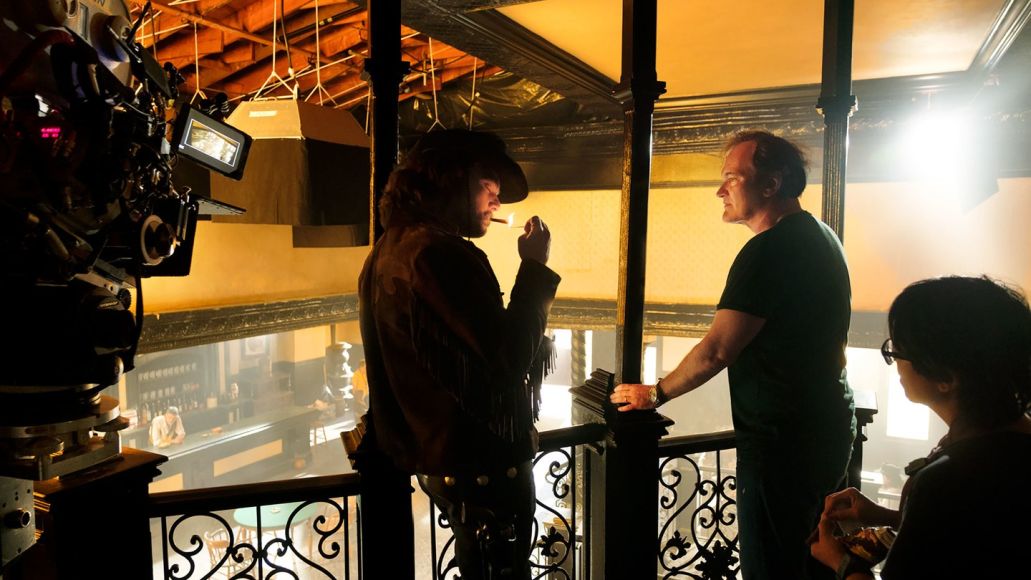 QT Pie: Let’s get this out of the way upfront. This is a fantasy, an equally garrulous and ambient fairytale from one of the industry’s most well-read and geeked-out artists. Radical things transpire that we cannot yet talk about in great detail; spoilers, and so on. But know this: Once Upon a Time … in Hollywood takes one of Tinseltown’s most infamous tragedies, the Manson murders, and morphs that history into a surreal odyssey that twists expectations at every whoozy turn.

Rest assured, the Tarantino hallmarks are all here: ratatat wordplay, dopey villains, an aggressive soundtrack. But the style has evolved, and the mood’s a little more advanced. Here, he’s pushing himself beyond his base instincts and into something more abstract. Once Upon a Time … in Hollywood is comfortable with quiet spaces, long takes, difficult blends of genre, and other unpredictable quirks.

Hollywood Babylon: When John Gregory Dunne wrote The Studio, the level of inside baseball he captured was new and exciting. His now-infamous chronicle of 20th Century Fox in decline in the late ‘60s presented a studio’s headaches over projects like Doctor Dolittle, Planet of the Apes, and The Boston Strangler. But the book was less about production than it was the little things. The juicy tidbits, the wandering eye of its author.

Dunne was interested in chief Darryl Zanuck’s manicured nails. He chronicled Rex Harrison’s troubles with production animals on Dolittle in the vein of a tabloid in-joke. Because of this, it wasn’t so much about the process as it was the aura of a place, that time and style of ‘Hollywood magic.’ Tarantino works in a similar mode here, lingering on the little things in an effort to paint something impressionistic — and his attention to detail is par excellence.

Tarantino is like Dunne: a fly on the wall for late-‘60s studio happenings as seen through the eyes of a pair of lunks. We get all the abrupt cuts, multiple spit-takes, and veil-pulling from elaborate stunts. On one set, Bruce Lee (Mike Moh) is depicted like a preening brat, fighting with Cliff. On another, Tarantino gazes at the Wild West lot, broken down with studio lights and fake-thin banners. Crane shots scream “big studio production”. Trailers, swinging car photography, tons of mesh, lots of linen, and a whole lotta Hawaiian prints. Baby, you name it and this film has got it.

It’s Hollyweird love letter material, but it’s glittered with Tarantino’s signature wise-ass attitude. Here he’s part historian, and part aging, experimental auteur. Take the early scenes, in which Rick is almost mockingly chronicled. DiCaprio’s all turtlenecks and leather coats, guzzling whiskey sours, and masking a stutter with practice. We meet him at his home. A giant piece of movie poster lays in Dalton’s driveway: it’s a painting of Rick’s face getting smashed by a boot. The thematic implications are so obvious, and yet also too funny to ignore. 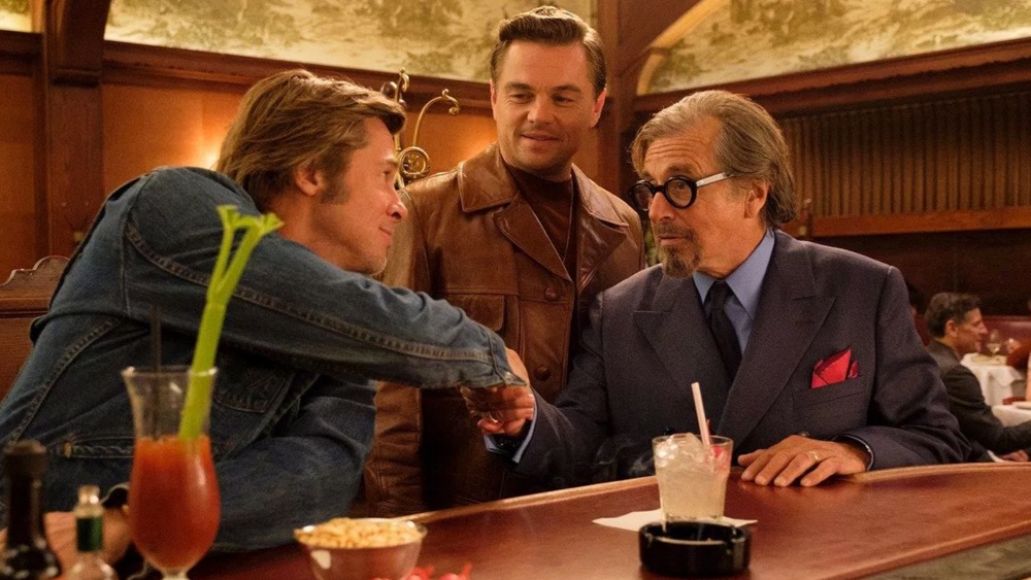 Things continue: On a sunny February morning, Rick meets with a Dominick Dunne-looking producer named Marvin Schwarz (Al Pacino), and he’s flattered to death. Schwarz boasts of watching old clips the night before from 14 Fists of McCluskey, a Nazi-torching pulp flick. Or of Rick dancing on Hullaballoo, an NBC variety show. And of course, Bounty Law, the show that made Rick famous. Think Riflemen, but a little daffier.

Now, that is a whole heck of a lot, but these snippets move nimbly. Immediately, we get this snarky sense of time and place that’s almost too describable. Tarantino lives within these margins, giddily obsessing on the oddball details like Rick’s anxieties over the flamethrower. Or the fizzed pouring of old-timey cocktails in between lines. Hell, an unreliable narrator even calls bullshit on Rick’s claims that his car is in the shop (when, in fact, his license was taken away).

In short, nothing’s stalls, and the plot and pacing basically works like a groovy time warp for us. Tarantino looks back like an unsettled daydreamer, with a lot of love and a bit of acid. There’s still some blood and guts and niche revelry, but it’s toned down. The pop cultural references seem less pointed (or braggy), and more about creating a vibe, to use the parlance of the time. 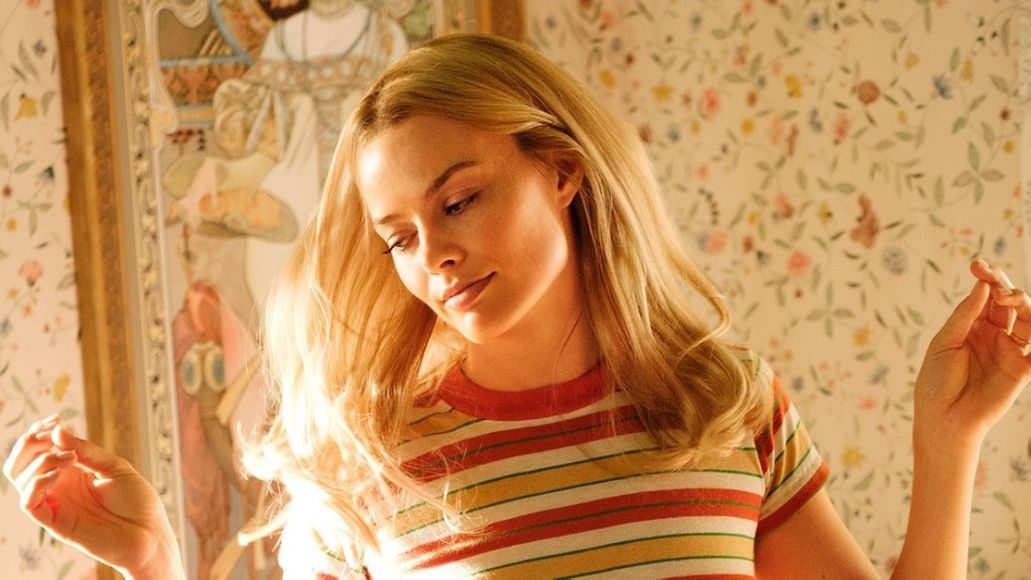 Marquee Men and Women: Tarantino has reached the point of filmmaking clout where he can pretty much cast whomever he wants. But his trio of leads here are so enthused, so ripe for the roles.

Robbie’s the sly heart of the project. An effervescent angel, freely roaming from place to place with this serene beauty. And if this sounds like simple praise for a pretty actress, you’re not terribly far off. But Tarantino wants her to exude that certain ‘It’ factor, and Robbie’s just a natural. The longing, the je ne sai quoi for a more innocent time, and Robbie’s bubbly enthusiasm is impossible not to agree with. To watch her screen one of her own movies in a theater with an audience, it’s less a moment of narcissism than of elation. Joy for the movies. Robbie makes Tate feel magical. And sadly missed.

(Ranking: Every Quentin Tarantino Movie from Worst to Best)

Meanwhile, the power duo of Cliff and Rick are amiable wanderers, stumbling into a real-ish Hollywood with their ridiculous stories. DiCaprio, now 44, has a wonderful air of worry about him. As Rick Dalton, he’s a man who grew up to be disappointed in himself for not becoming more famous. The actor leans on his grosser instincts: a little Southern twang here, some hungover self-loathing there. It’s on par with his work in The Wolf of Wall Street, in terms of comedic value (which is high), but more piteous. Throw Burt Reynolds and Lee Van Cleef into a boozy blender, and you have Rick Dalton.

Pitt is full on beach dude as Cliff, a seemingly chill but kinda shady stunt bro. (Imagine the couch stoner from True Romance grown up, if you please.) Cliff sports loose Levis and moccasins, but his scars allude to the lifetime of abuse he’s suffered. And Pitt delivers some extremely chummy and blackly comical stuff. 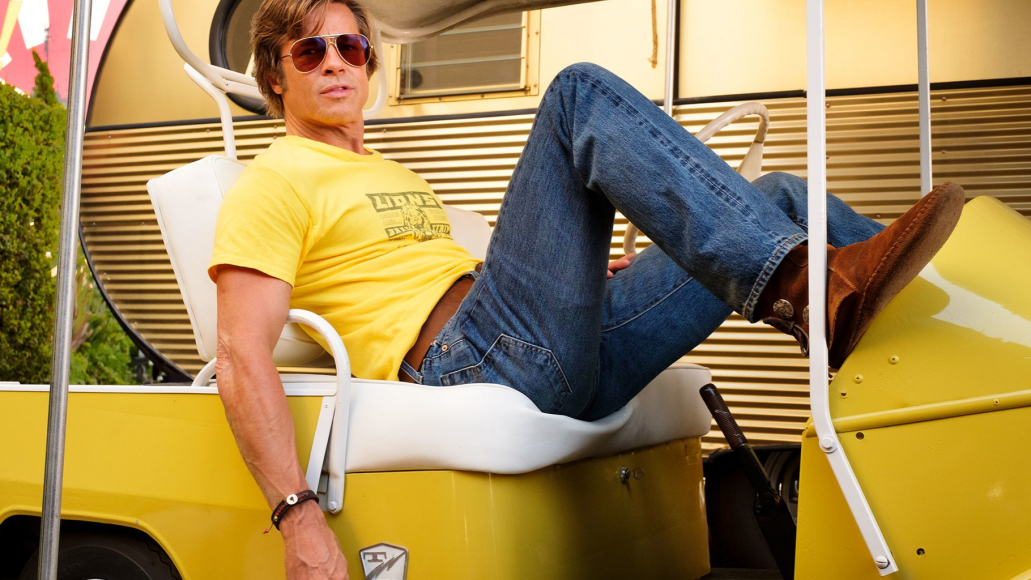 Devil’s In The Details: It will come as no surprise that Tarantino liberally emboldens his production team in making his L.A. live and breathe. Music supervisor Mary Ramos does her damnedest to assemble constant ‘60s listening, from Paul Revere to The Rolling Stones to an excellent use of Deep Purple’s “Hush”.

Tarantino leans on a wave of good vibrations and ominously upbeat tunes. Production designer Barbara Ling, along with veteran effects supervisor John Dykstra, deserves mighty praise for their efforts to bring Googie Los Angeles back to life. Neon signs, drive-ins, a world of greens and oranges and yellows. Even a Taco Bell looks retro-hip. But it’s all about creating a sense of place through texture. Maybe it’s the sunshine and constantly buzzing light, but it’s all so eerily inviting.

The Verdict: We’ve barely popped open the lid on Hollywood’s inner machinations. Such is the trouble with big, boisterous work like this: it’s so much. Once Upon a Time blasts audiences with memory and mystique, and Tarantino invites you to linger in a museum of his own making. It’s his Grand Budapest Hotel: a consideration made with a loving lament, encroaching violence, and above all, a jealous longing for pasts never personally seen.

It’s madness, inspired, thorny, and ultimately bittersweet. A remembrance by way of magical thinking. Tarantino’s done it before, and thank heavens Once Upon a Time … in Hollywood offers something new with a lot of old props. Stop, turn, and take the long, last ride down the Boulevard.

Where’s It Playing? At your nearest cinema theater on July 26th. Be sure to visit the concessions stand and grab a popcorn and/or soda before the show. Seek 70mm projections if possible! And at nearly three hours in length, be warned that there’s no intermission, so it’s best you stock up on smokes before the feature, friend.

Film Review: Once Upon a Time in Hollywood Offers Something New with a Lot of Old Props