The Pitch: Imagine this trailer-style, with sotto voiceover.

Frank Grillo is Abe. A bad-boy crook on the lam from the law. Anthony Mackie is Paul. A stuck-up fella just trying to do right by his unborn child. They couldn’t be any different. But together, they’re gonna have to settle their differences to take on <checks notes> crooked cops, and they’ve gotta keep <flips page> a jump, no, a zip … A FLASH DRIVE from falling into the <reads scribble> wrong hands. 48 Hrs., Fled, The Odd Couple, Midnight Run, etc. All of these should be thanked for their contributions on another date. Now, is there anything worth pointing out in an actioner like Point Blank? As a matter of fact, there is.

Point Blank’s got the right attitude, the right energy, and god help us, it’s like an affectionate noogie of an homage to 1987 meathead actioners.

Grillo’s Abe is a lifetime crook who lands in a coma after getting hit by a car after a bungled theft. Abe’s hit by his own dipstick brother, Mateo (Christian Cooke), when their meet-up goes south. Bummer. Now Mackie is Paul, a father-to-be and nurse. Because of the laws of a forced partnership in this kind of project, yes, of course he’s tending to Abe. Mateo, in an act of desperation, beats up Paul, kidnaps the would-be doc’s very pregnant wife, Taryn (Teyonah Parris), and forces Paul to get Abe out of his hospital bed.

Why? To take on gangs and cops while getting in each other’s grill with a healthy glaze of sweaty-man tension. Punch-fist brawls, stolen vehicles, double-crosses, reckless gunplay, long-take foot chases. Yes, sir. Proper action and shit. Just know there’s some Black Flag, William Friedkin, and other geeky references flying that help Point Blank feel a little better targeted than your average Netflix throwaway. 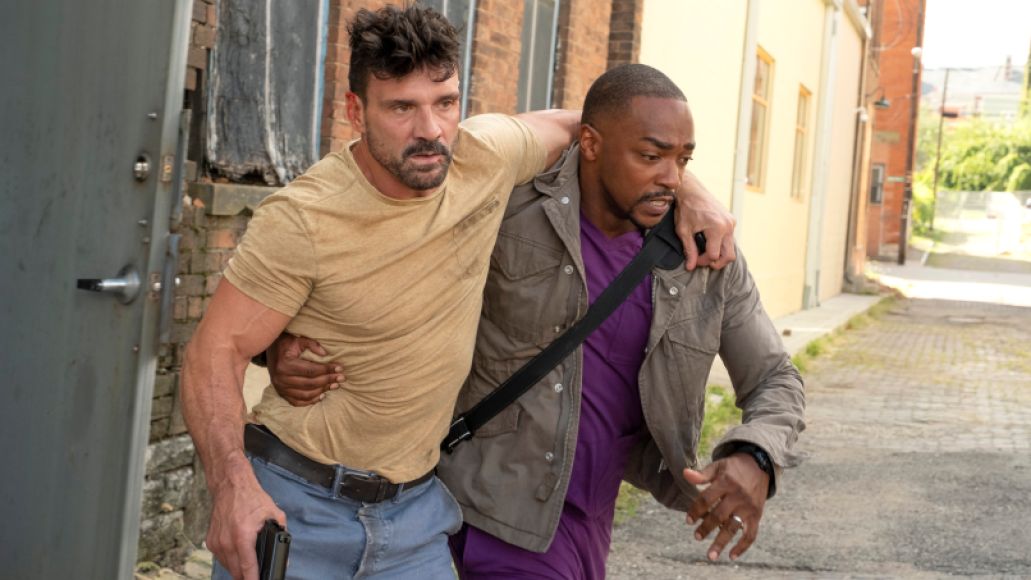 Oh, This Is a Remake?: Somebody send a congrats to Empire’s Philip Wilding for calling this in 2010. No, this is not based on that groovy Lee Marvin flick from 1967. This is an Americanization of Fred Cavayé’s pulpy 2010 outing À bout portant. AKA Point Blank.

A post-Bourne, pace-intensive thriller, Cavayé’s original relied heavily on genre reflexiveness to overcome its own preposterousness. It rattled nerves, and now so does Joe Lynch’s (Everly) more bruised-knuckle punk variant. (Ohio is no Paris, so…) Yes, there’s a kidnapping and con-games. The film is also a tight work of genre. But Lynch adds a layer of sort-of ‘80s and ‘90s macho cheese atop its lean-cut action.

How do you feel about pop music atop wiggly camerawork and shaky gunplay? BANG! BANG! “Rise Above” pops on the soundtrack as Abe rolls out of a suburban mansion in a leather coat, racing through the night and firing rounds at other baddies between trees. Then, we get GoPro car crashes and other cheap-and-dirty vehicular nastiness set to Sigue Sigue Sputnik (yes, the Ferris Bueller song). And get ready for a preparation montage with Paul loading a bag of drugs while Grandmaster Flash’s “The Message” vibrates. Come to think of it, this kinda is your dad’s swinging-dick movie.

But what’s funny is that the plot’s over-confidence (read: machismo, jockishness) manages to gloss over the ridiculous twists and shouting. Like, there’s no medical way Paul could keep Abe alive with a steady diet of syringes. And that old trope where hard-luck guys have to bluff other baddies into being allies? It would never ever work, but here of course it does. But those things are perhaps beside the point. The tropes merely act as foundational work. Lynch is happier to show off in the style department.

As a narrative, Point Blank’s like a screenplay slammed to the ground, shot repeatedly, and re-assembled with scotch tape and vending machine stickers (likely White Snake band logo iron-ons). It’s flashy. As far as action flicks go, Point Blank’s cool with its low IQ because it’s having fun throwing ‘bows to loud music. It knows what it is. 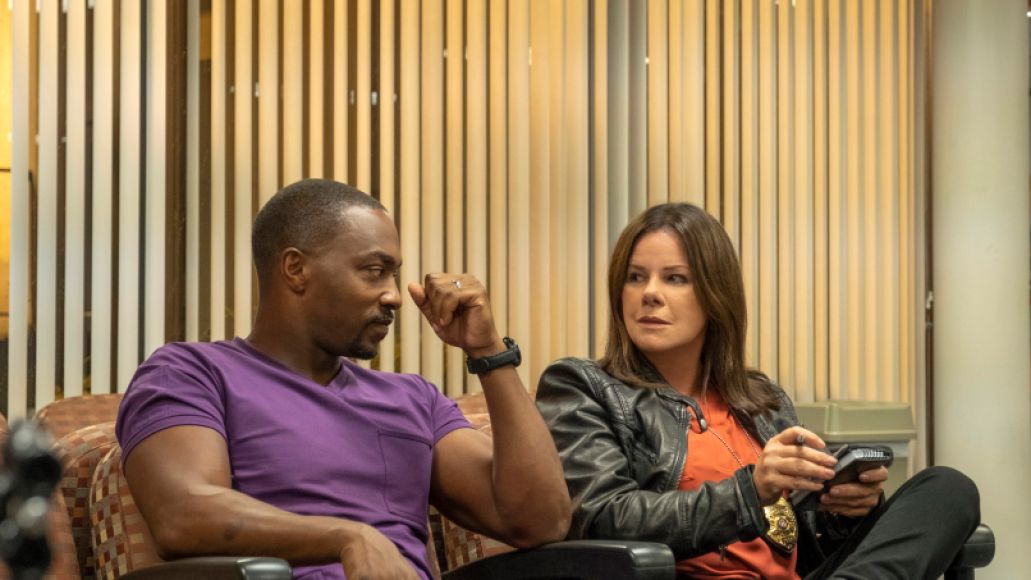 Good Guys, Bad Guys: One of Point Blank’s smoother operations comes in casting. Everyone seems to be in on the pasticchio. Each actor is happy to brandish their archetype in a way that teeters somewhere between camp and actual humility. Grillo is like a post-Stallone tough guy straight out of the beefcake factory. Nary a word he says connects, but he looks and certainly feels like a good-ol’ action star. And Anthony Mackie’s panting heroism to save his wife is neither clueless nor over-the-top; it’s actually kinda sellable. He centers the film.

Cooke’s dopey brother is like a hardened Fredo Corleone. Oscar winner Marcia Gay Harden chews every scene as a weathered cop with the kind of no-nonsense badge-flashing that character actors like herself always excel at. And if we can throw out an MVP award, it has to go to Markice Moore (TV’s Snowfall). As Big D, he manages to pull off a very film-school idea: a gangster that’s obsessed with TCM and wants his crimes to be orchestrated, shot, and cut like Friedkin’s Sorcerer or To Live and Die in L.A.. Seriously. It’s such a sloppy curveball idea that it actually works, and Moore is so game and spry that the high-concept joke lands. Weirdly, you want to see the finished products of his Scorseseian schemes.

Verdict: Before Paul and Abe steal a banana-yellow PT Cruiser, the granny driving it resists the commandeering.

“I have pepper spray in my purse!” the lady protests.

Abe, without missing a beat: “I have a gun in my pants.”

Michael Bay would kill for a moment like that. Point Blank just goes off and never looks back. Ever see an action scene in a car wash? Specifically, a fist fight? And here’s the cute kicker: said car-wash fight scene set to “The Rain” by Oran Juice Jones. And that, in a nutshell, is Point Blank’s energy. Lynch makes the silly thing work on a gut level. Perhaps it lean a little heavy on the corn, but in the same breath, it gets enough right — quick runtime, jokey moments, little niblets of actual pathos — to hit play if Netflix forces it your way.

Where’s It Playing?: At your local Netflix theater, be it a phone or perhaps on a high-definition television.

Film Review: Point Blank Shoots Past Other Netflix Throwaways With Self-Awareness and Style