God Only Knows: It’s getting harder and harder to “review” Newport Folk Festival. Now in its 60th year, the event established its peerless prestige long ago. As one of the country’s most prominent nonprofit gatherings, its philanthropic reputation is well documented — especially after donations to music-focused charities were made in the names of all of 2019’s announced artists. Unexpected collaborations have become customary happenings, from one-off supergroups to surprise appearances. I’ve been attending the festival for 10 years, writing about it for nine; if I haven’t presented a fair summation of Newport by this point, why should I be able to now?

The thing is, it may not even matter what anyone has ever told you about NFF. Ask any of the Folk to explain why they keep coming back and the conversation will devolve into a joyful blathering with words like “magic” and “special” and “love” sprinkled between discussions about that time Roger Waters showed up for just one song or — after this year — Kermit the freakin’ Frog. Indeed, there is a special sort of magic that comes to Fort Adams every summer, one filled with love, but it’s something perhaps better experienced than expressed.

Ultimately, what best encapsulates the festival is the year that most recently was. All anyone can do in the wake of another memorable edition is try to recap the performances that will be added to the annals of Newport legend. Because after all, it’s the artists that truly define this cherished institution. (PS: Also check out our full photo gallery from the weekend.) 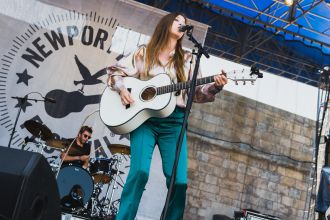 Everyday People: Even “rookies” are big deals at Newport, so there’s no shock when early sets like Jade Bird’s on Saturday are fully attended. Her self-titled debut has already positioned her as folk rock’s next breakthrough, and she delivered with the big-stage energy and confidence of someone ready to embrace that role. On the other side of the coin, Angie McMahon’s intimate museum stage set was sparsely attended, but you try playing against The Highwomen’s first-ever performance. Still, the Aussie singer-songwriter plowed through her nerves for what was effectively a record release gig, showcasing the formidably husky vocals that are going to make her an indie star in no time. Meanwhile, Kenya’s J.S. Ondara and his rich, resonating voice got a cosign from Dawes, who backed him early Sunday afternoon on the Harbor stage.

The Rainbow Connection: Anyone can show up anywhere on the Fort, which makes everything worth checking out. Sheryl Crow treated her set essentially like a Highwomen amuse-bouche, welcoming out Brandi Carlile, Maren Morris, and Jason Isbell to begin with before closing with James Taylor — who docked his boat in front of the main stage — on “Everyday Is a Winding Road”. Later, she joined Phil Lesh & The Terrapin Family Band to play harmonica during “Not Fade Away”. Yola, a ubiquitous presence all weekend, essentially stole “When You Call My Name” from Dawes and should immediately insert it into her own setlists henceforth. Phil and Brad Cook’s Cooks in the Kitchen and Kyle Craft’s tribute to Graham Nash’s Songs for Beginners were both nonstop successions of guests: The Tallest Man on Earth and Indigo Girls’ Amy Ray (in a Lil Nas X shirt, no less) were present at both, while the former had Anaïs Mitchell and the latter included Mountain Man, JP Harris, The Ballroom Thieves, Lake Street Dive, Preservation Hall Jazz Band, and Nicole Atkins. And that was on the smallest stage, mind you. 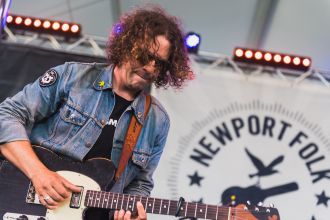 Phil Cook of Cooks in the Kitchen, photo by Ben Kaye 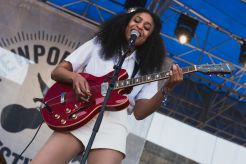 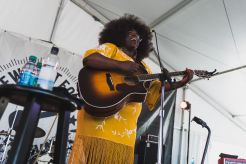 We Shall Overcome: While everyone’s out here trying to figure out representation, Newport is simply getting it done. Adia Victoria brought powerful gothic blues to open the main stage with a song about being black in the South at the same time queer indigenous musician Black Belt Eagle Scout was starting things over on the Quad. Our Native Daughters explored the folk definition of Black Excellence, constantly shuffling around instruments and bringing a rapt crowd to numerous standing ovations. Portgual. The Man ceded their opening time to a representative from the local Narragansett tribe, the daughter of a medicine man who thanked the band and the crowd for respecting the land her people have occupied for more than 360 years. Of course, there was also the ♀♀♀♀: The Collaboration set — but we’ll get there.

Under My Thumb: Many of the bigger names on the bill ended up having the smallest sets, with Jeff Tweedy, Trey Anastasio, and Warren Haynes all playing solo acoustic sets. Tweedy’s was a nice treat for Wilco stans, and Anastasio’s affable stage presence made him a fun watch even for non-Phish phanatics. It was Haynes who had the biggest moments of the three, though, as he brought out Isbell, Jonathan Wilson, and Lukas Nelson for some sturdy harmonies on “Find the Cost of Freedom” (CSNY) and “Masters of War” (Bob Dylan). 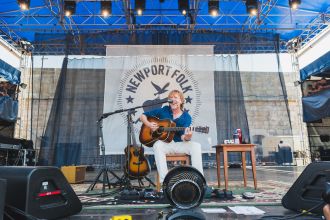 If I Had a Hammer: Superjam headliners have been the Newport vogue for years now, but 2019 presented two once-in-a-lifetime mega-collaborations. The Decemberists’ Chris Funk curated the festival-closing “If I Had a Song”, for which actual singalong songbooks were handed out to the crowd. Unfortunately, not everyone got a copy and those who did weren’t singing boisterously. It’s hard to blame them, though; who wants to sing over Hozier and Lake Street Dive doing “Everyday People”, or Anastasio and LSD’s Rachael Price dueting on a simple, winsome “God Only Knows”?

The house band was made up of Funk, former Sleater-Kinney drummer Janet Weiss, Benmont Tench, Wilco bassist John Stirratt, and Dawes’ Taylor Goldsmith. Mavis Staples teamed with Hozier and Our Native Daughters for “Keep Your Eyes on the Prize”. Fleet Foxes’ Robin Pecknold showed up out of nowhere to sing “Mr. Karma” — only to be joined by The Shins’ James Mercer, Isbell, and Fruit Bats’ Eric D. Johnson for “Suite: Judy Blue Eyes”. Which, amazingly, was followed by Judy “Blue Eyes” Collins herself coming out, joking that she told Stephen Stills of the tune, “It’s a beautiful song, but it’s not gonna get me back,” before playing “Turn! Turn! Turn!” with Pecknold. This kind of stuff can be what makes any other festival; for NFF, it’s just Sunday. 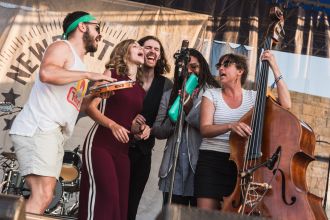 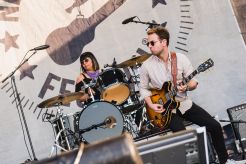 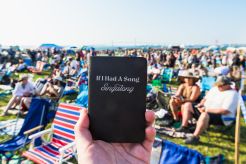 If I Had a Song, photo by Ben Kaye

Keep Your Eyes on the Prize: Close as it gets sometimes, not even Newport is flawless. Highly anticipated since she was first added to the lineup, Kacey Musgraves ended up being somewhat polarizing, splitting opinion between “underwhelming” and “so gorgeous.” Things worked best when she went full bluegrass, but despite the undeniable songwriting, it didn’t seem like it was hitting on all cylinders. Maggie Rogers, meanwhile, had the opposite issue, delivering a full-throttle pop performance that felt a little too much for the setting. There’s no doubt both talented artists fit at Newport Folk, and some will argue with the criticism here. Others, though, will agree it just didn’t click this time out.

This Land Is Your Land: The Highwomen (Carlile, Morris, Amanda Shires, and Natalie Hemby) had never played a show together before Friday, though you’d think they were the biggest band in the world based on their reception. They earned their rapturous welcome by proving they’re the most powerful country supergroup since the iconic collaboration from which they borrowed their name. The quartet also redid the namesake track, welcoming unofficial fifth member Yola to lead one of the verses. With each singer taking centerstage for their own songs, including Carlile’s stirring “first gay country song” “If She Ever Leaves Me” and two renditions of “Redesigning Women”, they unveiled their entire debut album during the set. The release was already highly anticipated, and now that we’ve seen what they can do live, we can’t wait for word on a full tour. 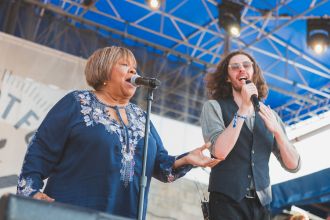 The Highwomen with Yola, photo by Ben Kaye 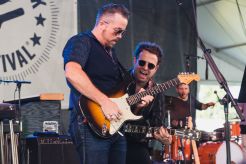 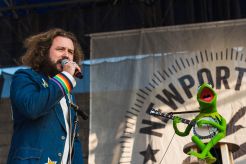 Jim James and Kermit the Frog, photo by Ben Kaye

Instant Karma!: For all that went on over these three days, some singular instances are going to be talked about for years to come. Dawes’ 10th anniversary celebration of Northern Hills had plenty of treats, highlight by Deer Tick frontman John McCauley playfully joining his fellow Middle Brother Goldsmith for the “When My Time Comes” finale, the definition of joy. Hozier yielding some of his stage to Carlile so she could perform her Grammy-winning “The Joke” after it was cut for time from The Collaboration is indicative of the respect Newport fosters. Jim James arguably had the most life-affirming moment of anyone the whole weekend, as the My Morning Jacket frontman got to sing “The Rainbow Connection” alongside his childhood idol, Kermit the Frog, during “If I Had a Song”. Take a second there: A Muppet played Newport Folk Festival. Backed by Janet Weiss and Benmont Tench. It happened.

Suite: Judy Blue Eyes: Even a Muppet can’t compete with the Queen of Country. Going into the mysterious ♀♀♀♀: The Collaboration on Saturday night, no one really knew what was going to happen. Names had been hinted at all weekend, easily brushed off as rumors, with the only sure thing being that NFF MVP Carlile had curated the special set. “In its 60th year, Newport is going to have its very first all-female, headlining collaboration,” Carlile said during her introduction. “Thank you for being on the right side of history again!” 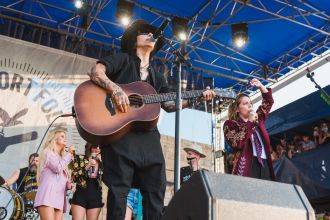 Linda Perry and The Highwomen, photo by Ben Kaye

Dolly Parton and ♀♀♀♀: The Collaboration, photo by Ben Kaye 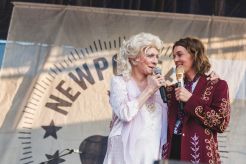 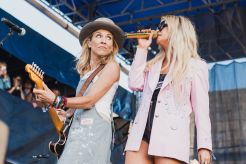 A day after making their live debut, The Highwomen got a reprise, as did Crow, who re-teamed with the quartet as the honorary sixth member. And then the shockers started happening. First came Linda Perry, instructing the audience how to belt along with “What’s Up”, as if they needed the help (an ecstatic Jade Bird certainly didn’t). She hung around on guitar for most of the set, only stepping aside when Carlile welcomed Collins out for her first Fort Stage appearance of the fest. Their heavenly duet on “Both Sides Now”, a classic sort of Newport highlight, was but a precursor to what came next.

Dolly Parton seemed simultaneously the perfect headliner for The Collaboration and a complete pipe dream. Yet there she came, stepping out from side-stage with all the grace and charm that’s earned her icon status. Her five-song performance with The Highwomen easily claims the title of peak Newport surprise, as much for the witty stories of early feminism as for the harmonies on “Eagle When She Flies” and “Jolene”. “I Will Always Love You” was presented as a gentle ballad with Carlile, and the finishing move was an all-hands-on-deck “9 to 5”. All the women on stage were clearly in awe of getting to sing such a landmark song with such a landmark individual — amazement only matched by those who witnessed it. 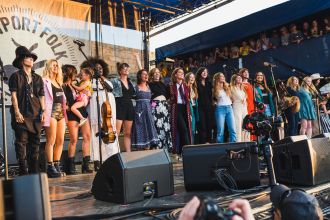 ♀♀♀♀: The Collaboration, photo by Ben Kaye 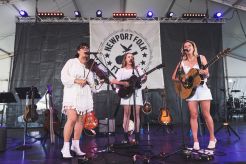 I’m With Her, photo by Ben Kaye 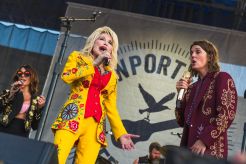 Dolly Parton and The Highwomen, photo by Ben Kaye

Goodnight, Irene: That up there is 1,700 words about some — some — of the best moments from this past weekend. There’s not even space to discuss what happened in the Quad during Jupiter & Okwess’ dance party. Or The Nude Party’s grooving ’70s psych. Or I’m With Her’s impeccable harmonies. They all represent just a sliver of the spirit and history that makes this such a deeply exceptional event.

Pete Seeger, whom the festival was dedicated to this year for what would have been his 100th birthday, believed in the power of music to bring people together. In a year like 2019, nothing proves we’re stronger when we’re singing together than three days at Newport Folk Festival.