To review: Eyes Wide Shut stars Tom Cruise and Nicole Kidman as Dr. William Harford and his wife, Alice. They are rich, successful and live in a gorgeous home in New York with an adorable daughter. After a swanky holiday party, in an attempt to refute Bill’s completely unwarranted claim that women don’t think about sex, Alice confesses that she once contemplated having an affair with a random sailor and how she fantasized about abandoning everything, including her marriage and family, to pursue it.

This admission challenges Bill’s puffed-up masculine beliefs, prompting him to escape into the night to undertake a spiritual and sexual odyssey in which he repeatedly encounters situations wherein sex — in many different forms — is offered up to him. Bill never indulges, however, and after a whirlwind day and a half, he and Alice make reparations, happy that their marriage has survived its latest test.

Bill’s sexual trials begin early on: while at Victor Ziegler’s (Sydney Pollack) Christmas party, Bill is pounced upon by a pair of models who offer him the opportunity to go to “the end of the rainbow.” Throughout the long tracking shot as they walk and hang off of him, Bill plays the naïve fool; the forward advances of both women could hardly be more apparent, and yet Bill seems determined to feign innocence and not play into their sexual advances. 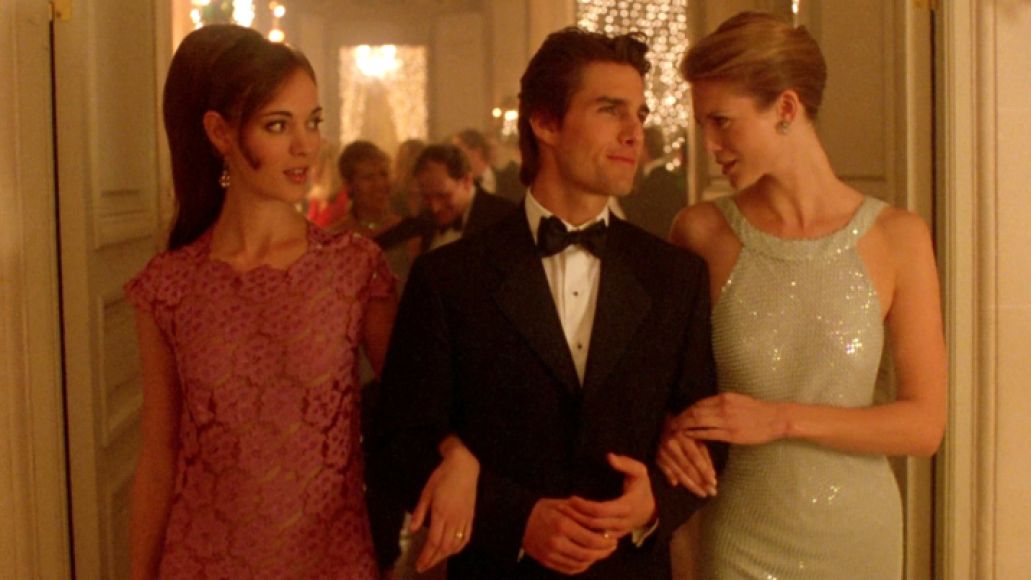 Following Alice’s admission after the party, Bill is called to the home of a deceased patient whose daughter, Mirion (Marie Richardson), makes a pass at him. Despite her confession that she is in love with him and an unexpected kiss, Bill once again refuses to engage. He numbly reminds Mirion that they barely know each other and that she is married. In this capacity, his behavior has a performativity to it, in that it adheres to the professional philosophy that he espoused earlier to his wife that his role as a doctor is desexualized. Mirion, meanwhile, is the literal embodiment of Alice’s argument: a female patient who has obvious sexual desires and actively fantasizes about what “handsome Doctor Bill’s little dickie might be like.”

Much like the holiday party when Bill is “rescued” by Ziegler’s emergency, he fails to self-extricate himself from Mirion. That responsibility falls on her husband (Thomas Gibson), who arrives to console his wife in the wake of her father’s death. The interruption allows Bill to escape and continue his odyssey.

Out on the street, Bill is latched on to, quite literally, by sex worker Domino (Vinessa Shaw), who – like nearly every woman Bill encounters – propositions him. Just like at the party, Bill acts coy. Initially he pretends not to understand Domino’s intentions, and once inside, when they discuss price, Bill is unwilling (or unable) to verbalize what he wants, smiling stupidly when Domino asks him directly. In the end, she is the one who determines the conditions and parameters of their sexual liaison, once again relegating Bill to the role of passive bystander in his own sexual journey. 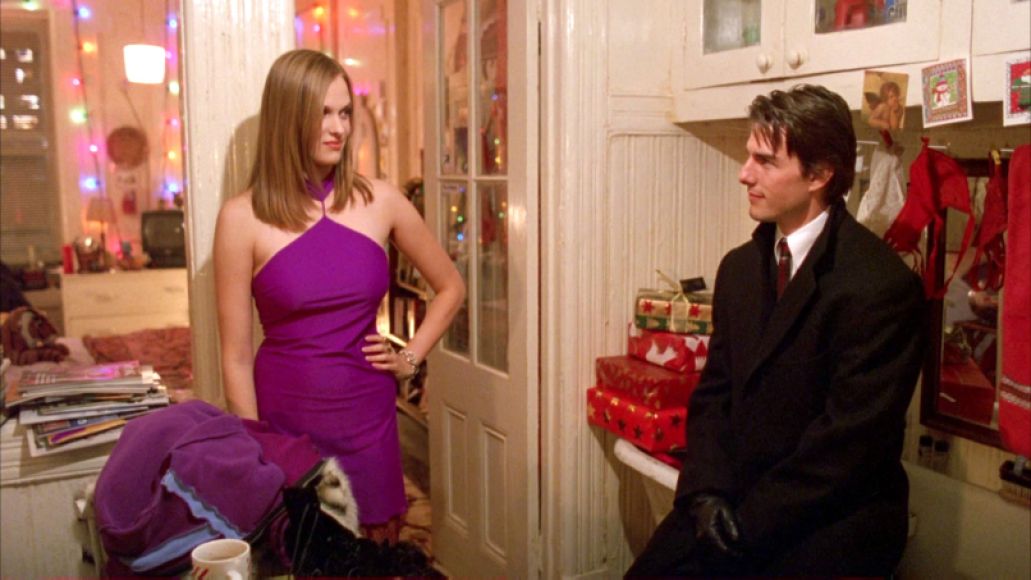 Moments later, Kubrick frames the pair in a closeup as Domino slowly leans forward to kiss him. Bill is visually coded as passive once again, failing to move to meet her and barely reciprocating the kiss. Admittedly, it is inferred that he remains overwhelmed by his jealousy of Alice’s admission (Kubrick even cuts back to Alice smoking in the kitchen in between Bill and Domino’s discussion and their brief attempt to consummate the transaction in the bedroom). Still, Bill’s reticence is reflective of his repeated inability to engage sexually throughout the night, despite the fact that he is repeatedly presented with a willing and able partner.

After a quick phone call with Alice, Bill pays Domino without engaging her services, and the film transitions to a jazz club where Bill’s acquaintance Nick Nightingale (Todd Field) spins a salacious yarn about a secretive party filled with beautiful women. Despite failing to engage meaningfully in both of the sexual encounters available to him up to this point, Bill resolutely attempts to conform to his idealized sexual image of himself by setting out to acquire a costume so that he can attend the party. Intriguingly, his interactions with both Nick and Mr. Milich (Rade Šerbedžija), the owner of Rainbow Costumes, are far more aggressive and assertive than any of his interactions with the women in the film, suggesting that despite his bravado and posturing, Bill is actually threatened by members of the opposite sex.

Although brief, Bill has another sexualized encounter while he is at Milich’s. While selecting his costume, the shopkeeper’s underage daughter (Leelee Sobiewski) is discovered in a state of undress with two older men. As Milich chastises the men, the unnamed daughter hides behind Bill. The pair exchange a quick smile that verges on a meet-cute before she wanders off down the hall with a raised eyebrow. The actions and eye contact are not dissimilar to the exchanges Bill previously shared with Domino, though this scene is significantly more brief. 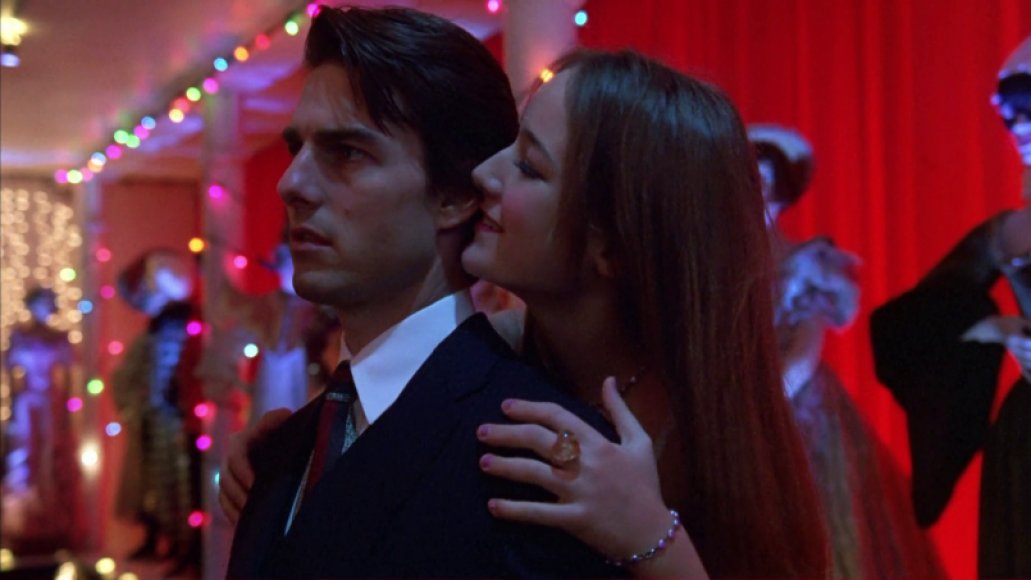 Despite being warned of the inherent danger, Bill nearly accepts the advances of another masked woman (though it should be noted that she approaches him, seemingly under orders from Ziegler). As always, the encounter is almost immediately thwarted; the first woman returns to warn him a second time. In a not-insignificant motion, Bill turns away from the woman propositioning him so that he can eagerly take the hand of the woman who does not want to have sex with him, once again suggesting that Bill is only truly active when it comes to opportunities to extricate himself from becoming a sexual participant.

In fact, the closest that Bill comes to being an active player in his own sexual narrative is when he returns to Domino’s apartment the next day and meets her roommate, Sally (Fay Masterson). Here Bill is much more traditionally forward: he maintains eye contact and grins lasciviously at her, in addition to staying in close physical proximity during their chat in the kitchen. He even begins to unbutton Sally’s top until she reveals the positive results of Domino’s HIV test. 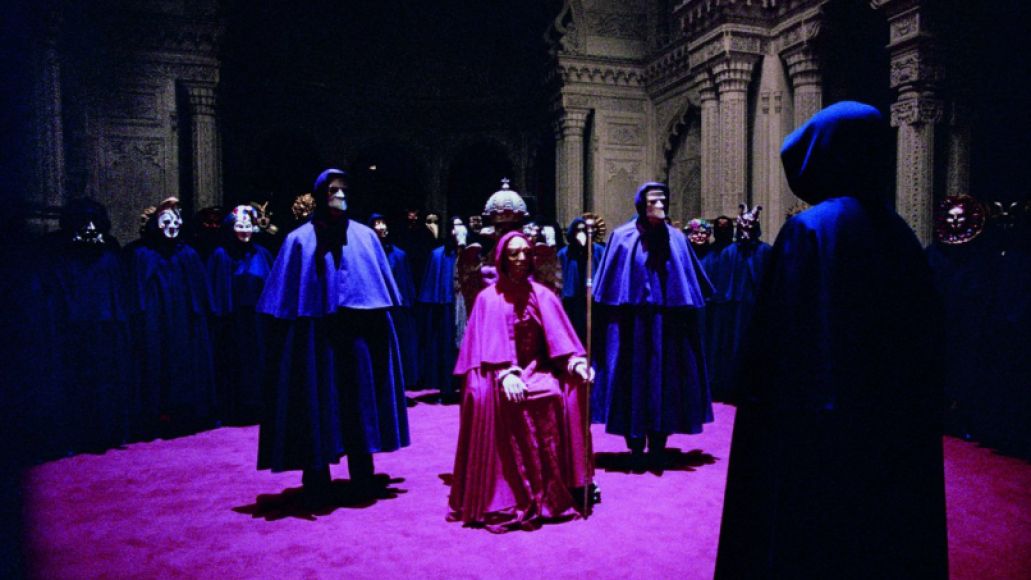 From this perspective, Eyes Wide Shut is a judgmental and sex-negative film. All of Bill’s near-sexual encounters end disastrously for the other participants, and the end of the film suggests that his rightful place is with Alice, their adorable daughter, and a closed marriage. From this, it would be easy to read the film’s overarching message as a confirmation of monogamy and an alarm about the dangers of casual sex. To do so, however, is to overlook how Kubrick uses Bill’s narrative arc to confirm that he is an obtuse, egotistical hypocrite — a man who talks a big game about the sexual proclivities of men and women, but resolutely refuses to engage sexually when he is given the chance. Bill and Alice’s repression of their true sexual desires and the shared delusion that their marriage is secure is a subtle, brilliant condemnation by Kubrick on the state of monogamy and marriage.