24 hours may seem like adequate notice. Perhaps. When asking people to leave their homes, one could argue if you live the caravan/shanty lifestyle, what’s there to pick up and go with? The prawns of District 9 in Johannesburg may have mastered space travel and hyper-powered technology, but down in the slums of South Africa, they live on cat food. The locals don’t want them. The government doesn’t know how to handle them. It’s a full-on humanitarian crisis. What to do with 1.8 million displaced aliens of the extraterrestrial and ultimately illegal variety? Simple. Move them a few kilometers away to nice tents and open spaces. Resources and support systems can be worried about later by the bureaucracy later. For now, the public seems to agree that these guys have to go. But see here’s the rub: Nobody told the prawns they had to leave until the day-of.

That 24-hour warning, the papers to be signed? Absolute crap. This is apartheid, plain and simple. Can you hear that? Under the cries of digitally rendered aliens in a realistic setting? It’s the scream of Mississippi, the Mexican border, weekend ICE raids, and dozens of other dehumanization headlines of late. Go bigger, it’s the echoes of Jewish genocide, Japanese interment, slavery, and hundreds of other racial segregation stories ripped from history. It’s foreigners, families, and children being maligned to crappy ghettos, only to get the boot after much hand-wringing, repeated without any shred of a lesson learned. District 9 is a primal scream on de-location.

For a science-fiction ‘What If?’, the circumstances surrounding alien occupation in District 9 are just too real. A breath-taking discovery of life beyond the stars is met with security guards, border walls, and 24/7 talking head news conjecture. Where’s the bilateral communication? The chances for peace? Perhaps somewhere, but after the local forces can figure how best to thieve the aliens’ more lucrative gifts. This is how it goes in District 9, Neill Blomkamp’s auspicious feature debut — a new classic by any other handle. Part journalistic dystopia, part baton-passing parable about humanity, District 9 took its high concept and sold it by any means necessary; gross-out elements, imaginative action, and a deeply trenchant sense-of-humor. 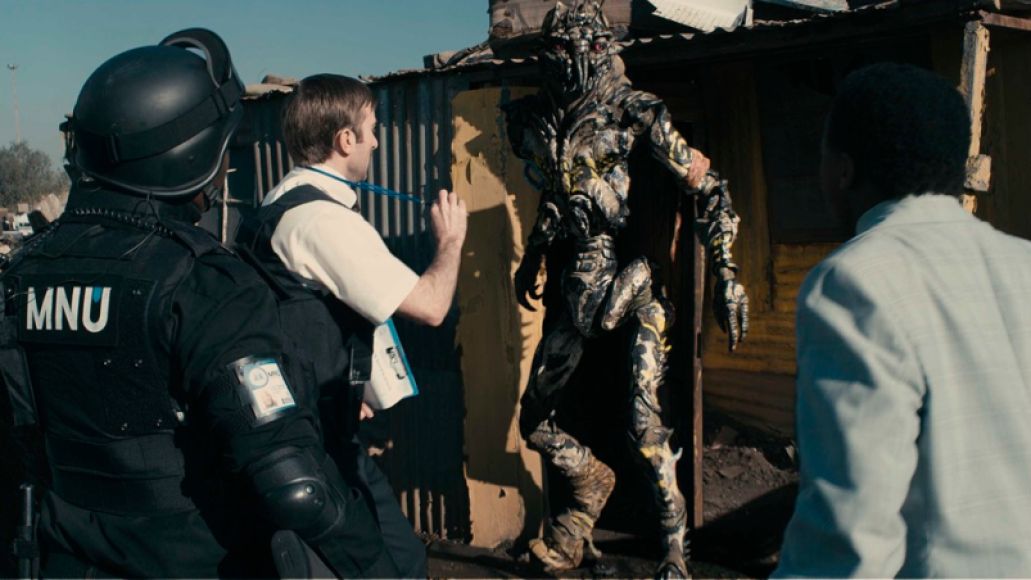 District 9’s heart bleeds for the subjugated. Blomkamp sides early with alien refugees. Now they’re the ones with magnet guns and the ability to tear people’s limbs off. So why are the humans the ones pointing and shooting automatic rifles while the aliens stand idly by? District 9 understands the mechanics of simple truths like hate and fear. Blomkamp knew what he wanted to say about moral rot, and how government and business splice in calloused ways. But District 9 has the courage to build these allegories into something outlandish, exciting, and even moving.

Because deep down, in its simplest form, District 9 is a genre flick about one guy learning how bad things are, and actually doing something about it. Through Wikus Van De Merwe’s (Sharlto Copley) stupidity he learns the hard way about inequity and reparations. And at the moment, we could use that sort of cathartic humility. District 9 in an act of righteous equity. A colleague put it best: It’s about one man’s reluctant loss of humanity in exchange for showing it to aliens, and the world that’s watching.

The human, Wikus, is a Multinational United (MNU) cog appointed to oversee the removal of prawns. He’s mannered, a bit timid, poorly mustached, and the perfect fall guy for MNU if things go bad. But he’s a bit apolitical, a lover of the job, and believer in MNU’s marching orders to get the aliens out of Joburg. Wikus is naïve enough to believe the party line about “prawns” likely being happy elsewhere. Wikus meets Christopher Johnson (performed by Jason Cope), a quite-smart prawn. Christopher is quietly working on technologies that could help his fellow prawns return home, but resources are limited, and human eyes are watching everywhere. But Christopher’s sharper, and a pacifist tinkerer, careful in his hiding.

When Christopher is served a notice from Wikus, the big-eyed alien scoffs, clicks his mouth in anger, and even suggests that eviction is illegal. Christopher would be correct in his assumption. But Wikus persuades him with, yes, a can of cat food. And in a heartbeat, Christopher loses his home and years of hard work in exchange for a bloody can of soggy meat. The Trail of Tears can only match this in terms of depressing qualities. 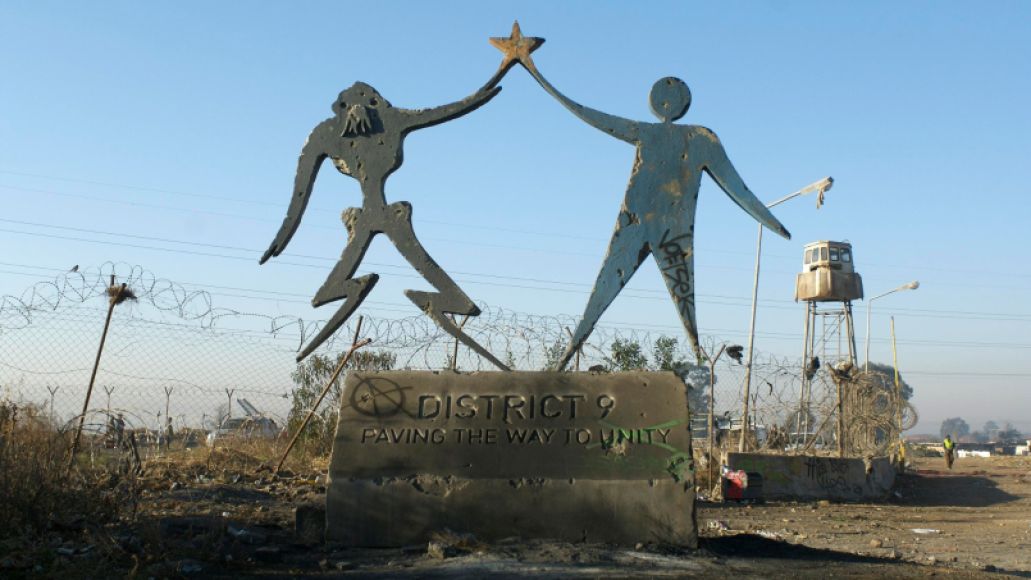 District 9 looks at this exchange with historical baggage, a depressed sigh, and folds its arms angrily. This is like the US government saying that children have adequate supplies at the border when they’re also rejecting donations. (“No no, pet food should appease these savages” is the appropriately sarcastic comment here.) Blomkamp hits a reasonably cynical tone from the jump, splicing these interactions with heated talking head interviews, and choosy found-footage of the prawns acting badly for the local news channels. Replace “migrant caravan” with “aliens” and this opening could be on Luara Ingraham and Fox News tonight, and no one would bat an eyelash screaming, “Send them back!” The prawns aren’t offered jobs. They resort to black market economies, and have zero chances of mobility. District 9, in its snide way, is all about condemning abuses stemming from lifetimes of shifty, sorry, shitty immigration policies.

But, after all the preamble, District 9’s secret power kicks in. The movie becomes a riff on changes, literal, and thematic. When Wikus investigates Christopher’s hut, the MNU lackey has an accident. He discovers a cylinder that stores the fuel that could bring the prawns home, but it has a funky side effect. Wikus sprays himself in the face with the cylinder, and immediately, he begins to change. Turn into a prawn. Now, Wikus is the ultimate majority. He is a mediocre white man, forced to deal with his complacencies for aiding in the removal of prawns. This is a brilliantly simple sci-fi concept about seeing the world through other people’s eyes, done to the nines. And the transformation, grody as nail loss and skin lesions are, is heart-breaking as we watch Wikus slowly accept his fate. Eventually, he realizes the best thing he can do is aide Christopher in something righteous and save the prawns.

Blomkamp keeps this gooey, violent, shocking, and, admittedly, very exciting as he races to close out the film with some sense of certainty. By many means, this is gonzo CGI fare, but its willingness to push viewers in to moral zones is what sticks. And when Wikus and Christopher become allies, it means something in the end: We’re in this mess together, and we need to help one another. In District 9’s twisty way, it’s a treatise, a call to peace through any means necessary.

Visually, District 9 uses its sense of place and attention to detail to depict border anxiety, hatred, and xenophobia that feel contemporary and eternal. The texture is key, as well, as Blomkamp’s cyber-punk remix is what ultimately sells us on the world. The slums are believably shabby with cardboard huts that resemble depictions of inferiority seen so often in our press coverage of immigrants and non-whites at a distance. And while the aliens are slimy and covered in trash, they also wobble and emote like humans with large, weary eyes. In this way, it’s easy to side with the prawns, and Blomkamp makes it even more accommodating by adding a slick layer of sharply-integrated CGI and production design to blend the mucky with the high tech. It’s just clever: The alien with the boringly human. It’s in that style of irony that District 9 truly makes its mark.

District 9 is an Apartheid allegory. In the 1960’s, non-white residents of Cape Town were segregated through racist policies, forcibly placed at the Cape Flats 16 miles away. And to bring that point to 2019, families are currently being ripped apart almost like a Kafka-esque fever dream at the American border, and the hatred is palpable. But the current bunk on “showing force to the world” is just that. After all, immigrants drive innovation: They helped the US with the A-bomb, the Apollo missions, and tons of other great moments in modern American history. So, why not engage in bilateral communications or collaboration? 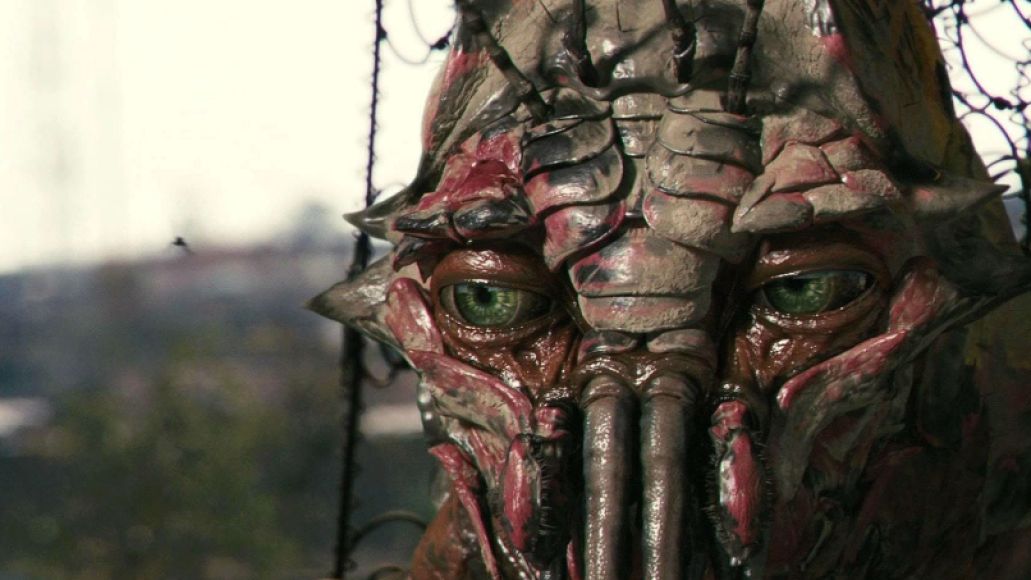 This is the real quandary in District 9, best exemplified as greedy companies yearn for prawn weaponry. Imagine the movie’s crazy electrical rail gun putting an end to battles, or being applied to electric companies? The possibilities could have been great, and aliens could have even solved crises. Instead, District 9 depicts horrible actions to suggest what humans would rather do. We’d rather dissect aliens for parts, or murder alien fetuses, because of “policy,” and so much more.

To cop the old adage: All art is political. From your overtly designed campaign button to the grand colors of reclamation in the Harlem Renaissance, or the German form and unity of Bauhaus, to the wild screams of punk rock proper, it’s there. Semiotics, encoding, and decoding, whatever you want to call it, your favorite arts have messaging. Either indirectly or quite literal. 2001, however obtuse, can still be viewed as a fear of the future. Halloween is this worrisome blend of American social values, mental health problems, and budding sexuality rolled into one night of horror. Arguably, these messages can get lost over popcorn. Felt not understood. But we get there inevitably. 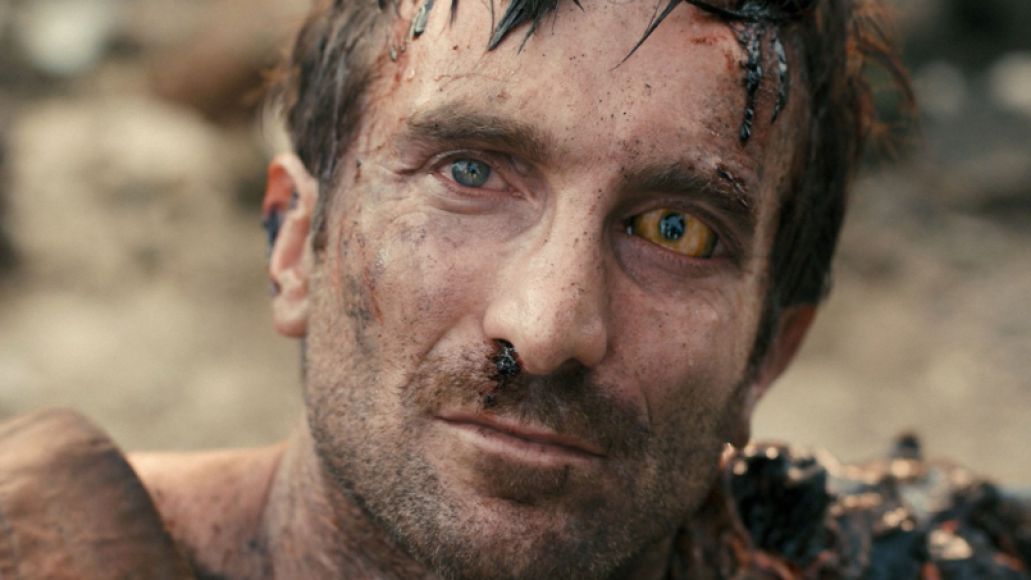 It’s funny how a great genre flick can sneak in social ideology (even confrontational), and a viewer won’t take umbrage because they’re being so well-entertained. Arguably the best art can have the most offerings, and get people to think a little. A great recent example is Get Out, that dizzyingly dark comedy and home invasion thriller from 2017 that has a lot to say on race relations. Its meme status opened tons of white viewers’ eyes to everyday racism — and the list goes on. Cold War paranoia and the Body Snatchers. Wealth inequity in Wes Craven’s People Under the Stairs. Consumer fetishism in Dawn of the Dead. Fahrenheit 451’s concerns for fascism and illiteracy. All genre fluid, all unique, and all big hits and audience faves. These lower budget efforts, like District 9, had nothing to lose, and so much to say, and they last.

Yes, we get the action scenes, the cool effects, and propulsive music. But again, Wikus is that lead character that learns something, and his sacrifices speak for people’s abilities to maybe, just maybe, see themselves in people they once thought were inferior. And take comfort in this: If Trump is pissy about the forthcoming Blumhouse thriller, The Hunt, and its depictions of the murderous rich, imagine how much he would hate District 9 were it to come out today. In District 9, we’re so entertained by Blomkamp’s fast and confident hand, it doesn’t matter that we’re being played like a skin-fiddle. We’re with Wikus by the end. Save Christopher. Save the prawns. Save the people.

Aliens, Immigration, and What We've Yet to Learn From District 9