The Pitch: After years of serving as a dedicated member of the Secret Service (and saving Aaron Eckardt’s President Asher from Korean and Middle Eastern terrorists in the previous Has Fallen films, respectively), Mike Banning (Gerard Butler) is eyeing a desk job as Secret Service Director so he can settle down and spend more time with his wife Leah (Piper Perabo) and their little girl. Wouldn’t you know, former Speaker of the House Alan Trumbull (Morgan Freeman), now President, wants to offer him the job.

Before he can, though, a high-tech assassination attempt leaves Trumbull in a coma and Banning framed for the attack. Escaping from his captors, Banning goes on the run, hoping to evade both law enforcement and the rogue military contractors responsible for the setup. He’ll need more than just his wits and expert fighting skills to clear his name; he’ll need the help of his kooky doomsday-prepper dad Clay (Nick Nolte).

White House Dumb: Something in the fabric of the universe went decidedly hinky in 2013: of the two “Die Hard in the White House” flims that came out that year — Olympus Has Fallen and White House Down — we clearly picked the wrong one to turn into a trilogy. Instead of a campy series of buddy action movies with Channing Tatum and Jamie Foxx as Fantasy Action Obama, we as a moviegoing public chose the self-serious flag-waving of the Fallen series (not to mention some of the ickiest geopolitics to come out of an action movie series this decade, but more on that later).

This time around, Angel Has Fallen strips down the series’ usual formula into a lo-fi domestic thriller, the kind of ’90s throwback that feels way more The Fugitive than Die Hard. Butler’s still a gruff, workmanlike action lead, mumbling through braindead dialogue with a marble-mouthed American accent. In theory, his age is supposed to be a liability; we learn he’s downing pain pills in secret to hide the spinal damage he’s endured from decades of ass-kicking, but after the inciting incident that doesn’t get brought up once. 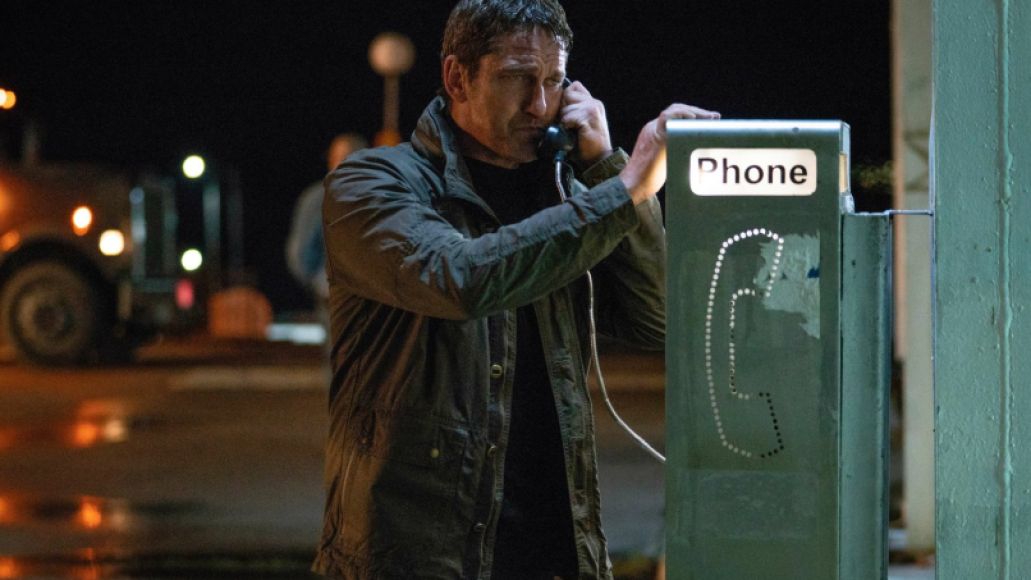 In a post-John Wick world, the action isn’t great; director Ric Roman Waugh (Felon, Snitch) directs the action with Bourne-era shakycam and a greyed-out color palette. So much of Angel Has Fallen feels like you’re watching a GoPro video in an abandoned warehouse. Most of the setpieces take place in the dead of night, making it almost impossible to see what’s going on.

That being said, Waugh (a former stuntman) does place a greater emphasis on practical stunts and effects, which offers some intermittent thrills. Explosions fling flaming bodies into water; a semi truck speeding down a back road flips and tumbles. In an age where most action thrillers are plastic walls of CG, one can thank Angel Has Fallen for at least maintaining the grand tradition of the stunt performer, even if you can barely see it happening.

Just in the Nick (Nolte) of Time: About an hour into this two-hour Redbox chow, Nolte shows up as a craggy, flannel-wearing survivalist who turns out to be Banning’s estranged dad — a Vietnam war vet living in the woods and packed to the gills with weapons, supplies, and more conspiracy theories than you can shake a stick at. For these blessed 20 minutes, Angel Has Fallen is a sheer delight; late-stage Nolte is always a treat, but give him some claymores and a tinfoil hat, and he’s absolute gangbusters. He even manages to eke some personality out of Butler’s all-business Banning, the two sniping at each other about old grudges while claymores go off around them. It’s a shame, then, that after this blessed setpiece (the one time in the movie Banning ever feels out of his element), he and Nolte part ways for nearly the rest of the movie. I just wanna shake the screenwriters by the shoulders and scream, “You had something good going! Hold onto it!” 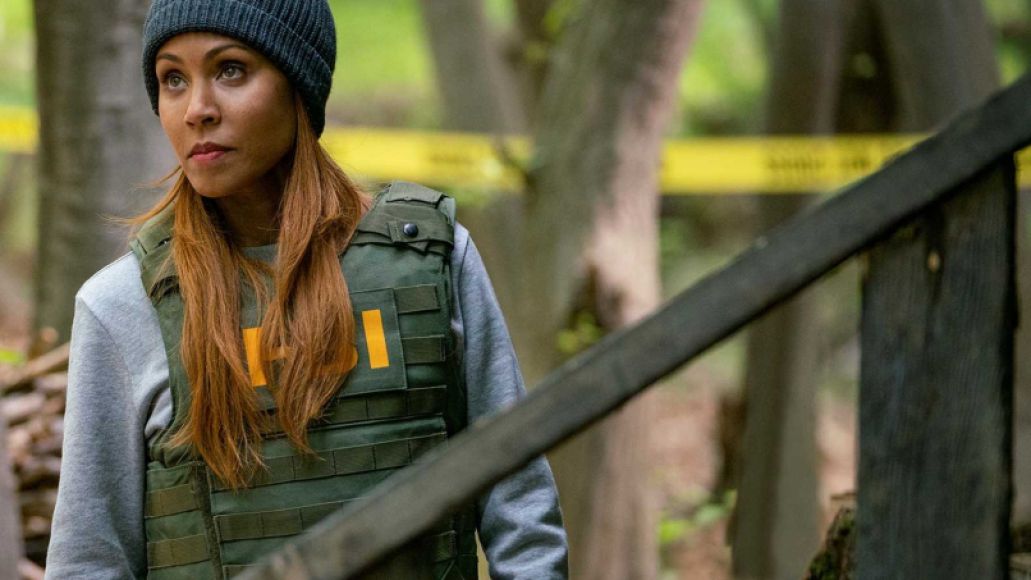 The Treason Is Coming From Inside the House: One of the biggest shakeups to the franchise is its politics: Olympus and London were soundly (and rightly) condemned as “terrorsploitation,” the kind of post-9/11 flag-waving that veered all the way into racism and xenophobia. Here, the villains are internal: a group of out-of-work military contractors with state-of-the-art technology and a desire to kill the president so he won’t put them out of work. What’s more, they’re led by an old friend of Banning’s, a fellow war horse named Wade Jennings (a suitably feline Danny Huston).

There are shades of Blackwater in their modus operandi, and the screenplay (co-written by Waugh, Matt Cook, and genre vet Robert Mark Kamen) takes a few potshots at America’s internal corruption — get ready for a member of the executive branch wearing a red tie to say “Make American <verb> again” — and our uneasy relationship with privatized military forces like Blackwater. But most of these critiques are confused and toothless, shying away from any real systemic critique in favor of explosions and clear good/bad guys.

But What About Morgan Freeman? What about him? He’s barely in it. He spends most of the film (a film, I remind you, he’s second-billed in) in a coma, bookended by a low-energy performance as a sleepy president who can barely bark orders from his hospital bed. I never thought I’d say this, but I miss Aaron Eckhart. 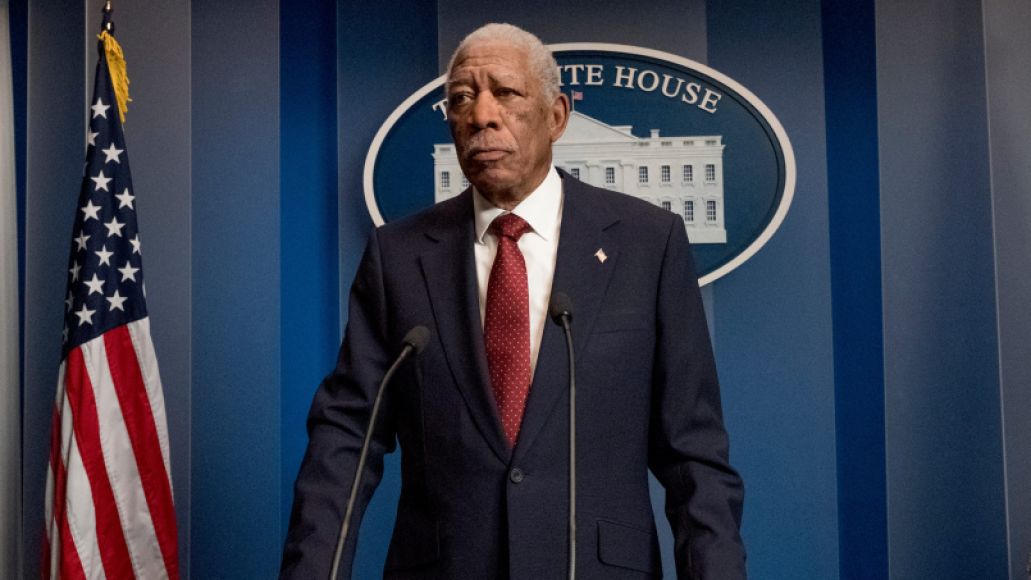 The Verdict: Angel Has Fallen is maybe the least objectionable of the Fallen series, but that’s not really saying much, is it? At two entire hours, this thing drags like nobody’s business, flitting from one ’90s thriller cliche to the next with only a brief, joyous respite centered around Nolte. What’s more, it can’t quite decide on a coherent political philosophy to replace the jingoism of the first two. Sure, Banning isn’t busting brown people’s heads and telling them to “go back to Fuckheadistan” in this one, but replacing that with a milquetoast critique of Trump-era kleptocracy feels like too little, too late. It’s hard to forgive a film series that celebrated the kind of xenophobia that got Trump elected for turning back around and trying to absolve itself of the same crimes.

Where’s It Playing? Angel Has Fallen solemnly salutes an American flag while firing a machine gun in theaters August 23rd.