The Pitch: Stories offer us an incredible power; they can bring good into our lives, or they can bring pain. This is a central idea that Scary Stories To Tell In The Dark attempts to focus on. Taking the classic short stories from the beloved children’s book series by Alvin Schwartz, producer Guillermo del Toro, director André Øvredal, and writers Dan and Kevin Hageman create a mythos surrounding these cursed tales.

The film wastes no time diving right into Halloween nostalgia. From pumpkins to the cozy autumn air, to the tune of Donovan’s “Season of the Witch”, we are given a fun reminder how this is a Halloween themed flick. This focus on Halloween extends itself to that of main protagonist Stella (Zoe Colletti), who adores all things horror and creepy related. Soon after the film’s opening, we are introduced to the rest of our cast, namely Stella’s friends. There’s Auggie (Gabriel Rush), Chuck (Austin Zajur), as well as newcomer to the group Ramón (Michael Garza).

(Read: How The Jangly Man Was Created for Scary Stories to Tell in the Dark)

When the friends decide to go to a haunted house, Stella tells Ramón about an evil girl named Sarah who was supposedly responsible for killing children. She has long since passed away, remaining a folk tale among the townsfolk. In the house, Stella comes across a book that belonged to Sarah that contains (you guessed it), scary stories she wrote. Taking this book home with her ends up not being the best idea, kicking off a wave of nightmares the group must try and overcome before time runs out for them.

Our main cast is tolerable, providing moments of comedic enjoyment. Of the bunch, Zajur’s Chuck is hilarious, offering plenty of zingers during his onscreen time. Rush’s Auggie also provides a good deal of banter, with Colletti’s Stella being the main driving force in pursuing the mystery of the haunted tales. Interactions between friends can be funny there and then, but the over-dramatized sequences give off a corny vibe. Where the film performs best is in its moments of horror. 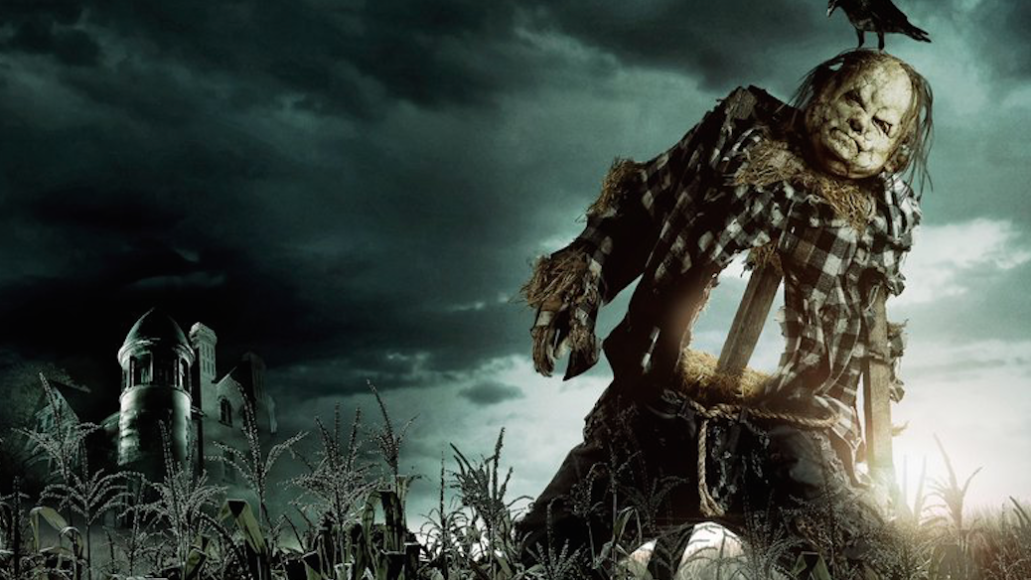 Monsters From The Page: If you grew up reading these books, you may recall just how creepy they felt; looking back, you may even think they were a little too much for little kids to read. The horror throughout Scary Stories never goes super dark, but certainly provides some ominous vibes. Those who lost sleep with the books as kids will know of the iconic characters and stories they take part in. The film ends up putting a unique spin on some of these tales, slightly adjusting their narratives to fit the particular situation of a character. Among those monsters that get screen time, there’s that of Harold the scarecrow, The Pale Lady, the Jangly Man, and a couple more. While not all these segments are equally as unnerving compared to one another, each does offer its own form of uncomfortable atmosphere.

By far one of the best examples is that of The Pale Lady sequence. Without getting into spoilers, the use of lighting and space makes for a nauseous and anxiety-provoking experience. When it comes to the animation and designs of these iconic characters, each looks good for the most part; at worst, one will notice some cheesy looking CGI. In the case of Harold, his stiff movements feel authentic to how a scarecrow would move, his section of the film providing a real sense of tension.

To intensify interactions with each of these nightmare beings, the film utilizes great use of deceptive sound design and awkward camera perspectives. In one scene, where Auggie is confronting a woman who wants her big toe back, we’re left on the edge of our seats as he looks around the room for the ghoul. The camera feels strained during the scene, following how Auggie is trying to carefully and quietly turn his head around to look. During all of this, there’s barely (if any) sound, and that dearth in audio keeps the viewer in suspense for jump scares (of which there are plenty; some deserved and some not).

Aside from one shocking violent scene, there isn’t much in the way of gore. However, there is some really neat use of body horror that will catch viewers by surprise. Along with these horror elements, the story does dip its toes into some grim and melancholy waters. We get these auras in the form of the film’s antagonist Sarah; the characters come to learn more of her past, discovering some upsetting details. This use of Sarah caters more to building upon the film’s mood, however, rather than provide a sense of unease or scares.

Scary Stories isn’t really all that scary; if anything, it’s more of an experience built upon situations that exude anxiety and tension. 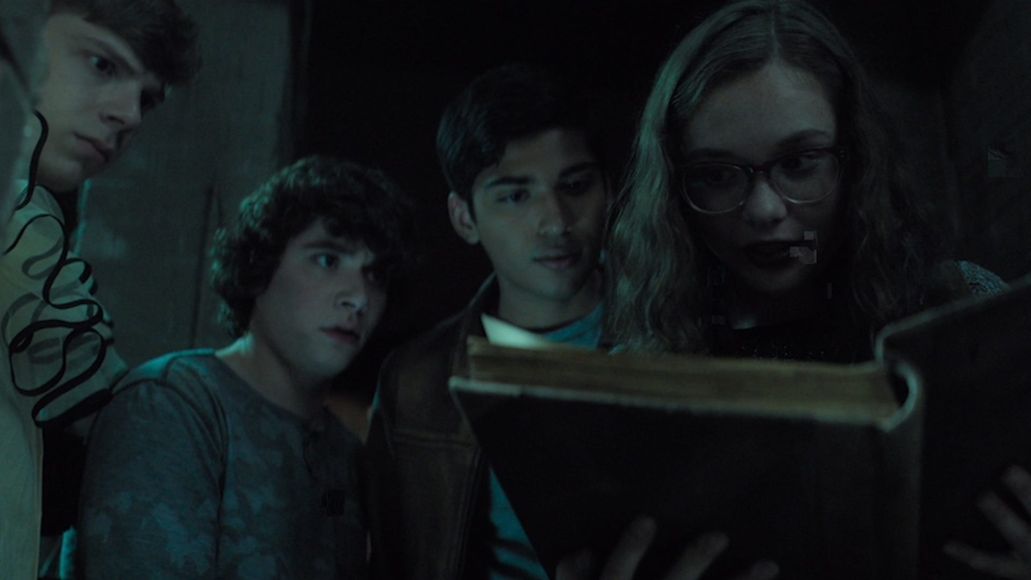 When Story Threads Are Left Undone: At most, Scary Stories‘ writing and plot structure gets the job done, moving the plot and characters forward (even if it lags at times). In between the more horror driven set pieces, the film lacks the potent appeal that should be present during a mystery. Once the film reveals its setup for how events will play out, the plot’s progression turns into a waiting game. After getting past more investigating and listening to the character’s joke around, one can finally look forward to a fun horror scene. And while the initial mystery of the film does capture one’s attention, it doesn’t lead to anywhere special, wrapping up in a manner that feels too wholesome and off.

One big issue is how the film attempts to juggle multiple subplots, most which feel pointless or undeveloped. Early on, we learn that Stella’s mom just up and left her family one day, leaving Stella to feel as if it was all her fault. At first, it feels like this plot point is shoehorned in as a weak “character trait,” but the concept is handled so poorly that it feels less than that. When the conversation of Stella’s mom leaving comes up, it’s only brought up in small snippets; there’s no self exploration or big lesson learned, the conversation just comes and goes and is eventually wrapped up. 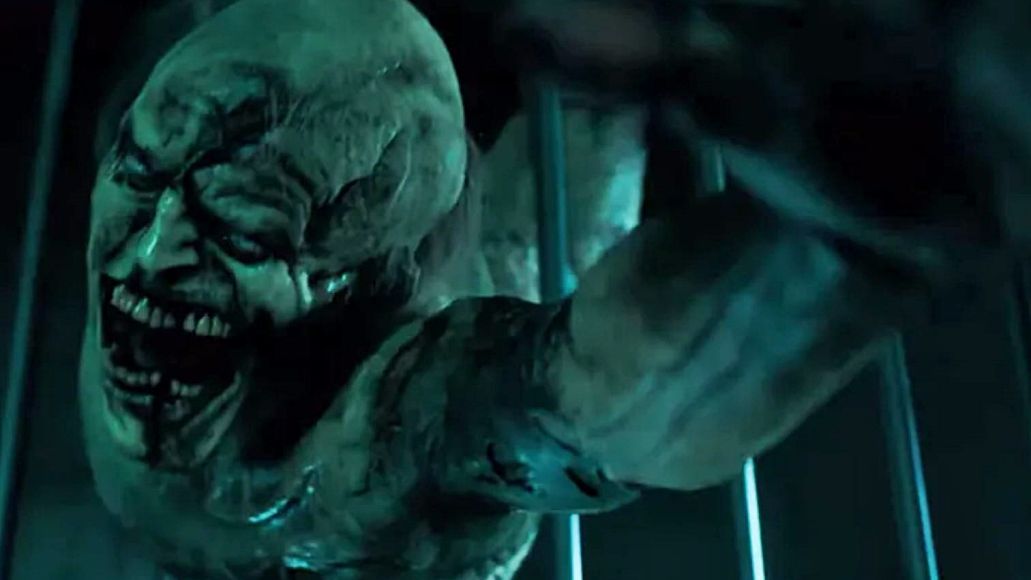 Oddly enough, the film excels for its political elements — sincerely. Set in 1968 amidst the Vietnam War, the film does not shy away from that fact, highlighting posters of Nixon, his ominous television broadcasts, and the conversations they spawn around town. It’s here where the film retreats to that idea of the power within stories. After all, the Vietnam War has had a tremendous impact on human history, with many of its stories coming from those who have witnessed its horrors. While that parallel between the war’s ensuing political events and the narrative beats of the film don’t necessarily click with one another, it does provide a unique if not unnerving backdrop and allegory for the film.

The Verdict: While some viewers may get enough of a nostalgia kick out of Scary Stories To Tell In The Dark, the film doesn’t feel entirely fleshed out. There are elements that make for creepy experiences, keeping the viewer on the edge of their seat, but they often serve as short bundles of anxiety in a serviceable story. Our main characters, albeit enjoyable, lack any real depth or quality to latch onto outside of humor. And with so many subplots, the film finds itself a little manic and lacking any substance. Having said that, there’s genuine fun to be had in Scary Stories To Tell In The Dark, one just has to be willing to search through the cornfields to find it.

Where’s It Playing? Scary Stories To Tell In The Dark crawls its way into theaters August 8th 2019.

Film Review: Scary Stories To Tell In The Dark Isn't Really All That Scary