The Pitch: When three dopes in the Irish mafia get pinned, the result of a bungled bodega robbery, they leave their wives to take care of things as they serve three years at Rikers. The Kitchen isn’t about these guys, though, it’s about their wives: Kathy Brennan (Melissa McCarthy), Ruby O’Carroll (Tiffany Haddish), and Claire Walsh (Elisabeth Moss). Together, the three are tough-as-nails, cunning, and ready to take on every force looking to hold them back. This is a retro feminist thriller, styled like Mean Streets, and done in the spirit of Sara Paretsky novels, or even the female-led WB gangster flicks of old Hollywood like Lady Gangster or Gun Crazy. Tough-talking women, whose chips are down. This is about women scorned, through with taking crap, and ready to survive and prosper.

Eventually, the trio unite to take on the Irish mob, the FBI, and other side missions in order to rise to the top of the family. What starts as making ends meet for their families turns into a saga of empire-building for Kathy, Ruby, and Claire. And you know what? They have fun doing bad things, too. In fact, they’re quite good at crime time. Jackie Jr. (Myk Warford) is breathing down the wives’ necks. Screw him. Claire’s got him taken care of (ifyaknowwhatImean). Ruby’s mother-in-law Helen is enabling the capos to be pigs to the wives? Don’t worry about it, Ruby’s got the situation handled, heh. Hasidic Jews are going with Brooklyn mob contractors, not ones from Hell’s Kitchen? Have they talked to Kathy, queen of the unions yet?

It’s like that in The Kitchen, a late-summer blitz of mob movie tropes made satisfying by supreme leads and enthusiasm for its roots. Based on the Vertigo comic by Ming Doyle and Ollie Master, Oscar-nominated writer (and first-time director) Andrea Berloff takes a shot at a staid genre with a strong hand and an overtly feminine mystique. 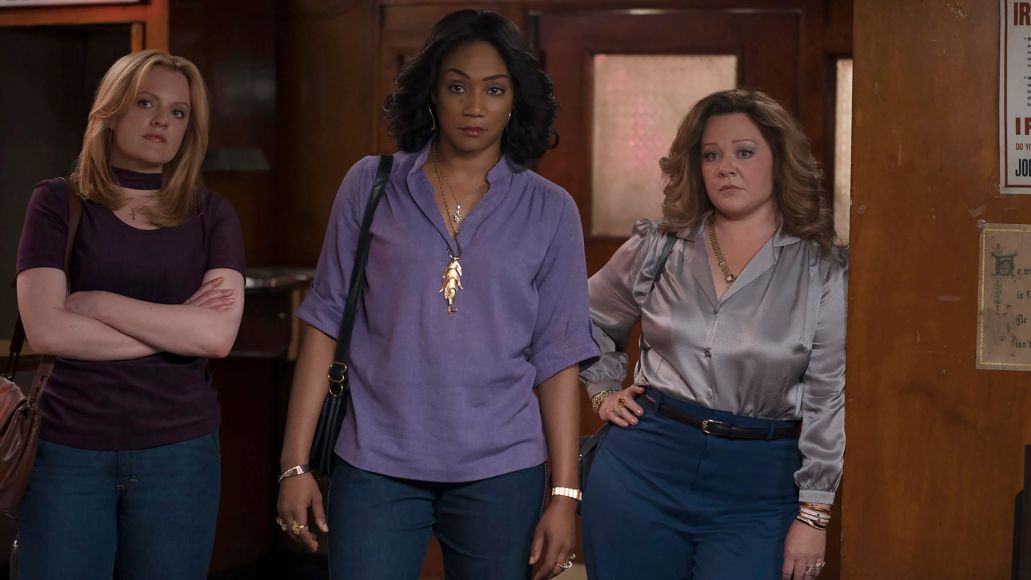 It’s Dark and Hell’s Kitchen is Hot: Club me with a pistol grip if you’ve heard some of these. The thick-neck goons with leather coats. A moving-on-up montage with disco dancing crosscut with counting cash. The crooked cop. Double-crosses. Dumpsters leaving garbage at a client’s front door. Bodies down the river. The wild-card pretty-boy murderer. The not-connected, scolding parent. The Catholic masses and funerals. The shady union meetings. The simpleton kid crook. The local grocer struggling to make his vig. The flagrant use of ‘70s pop like Fleetwood Mac or “Barracuda” by Heart.

At first glance, The Kitchen may seem predictable, or perhaps kind of easy — Oh, the mob wives have to take care of business and won’t stand for goons anymore? — and you would be right for the most part. But The Kitchen manages to offer up more than expected. A million little wheelings and dealings transpire in Berloff’s enjoyable directorial debut, and Haddish, McCarthy, and Moss sell every last one of them. As evidenced by her work on the screenplay for Straight Outta Compton, Berloff has a knack for dramatic momentum in an adult key.

Take for instance, an early negotiation. You know this scene: the mob movie meeting about a contract. Here, things give off a different energy. Ruby assures the old guy she’s simply “here to talk about your options.” 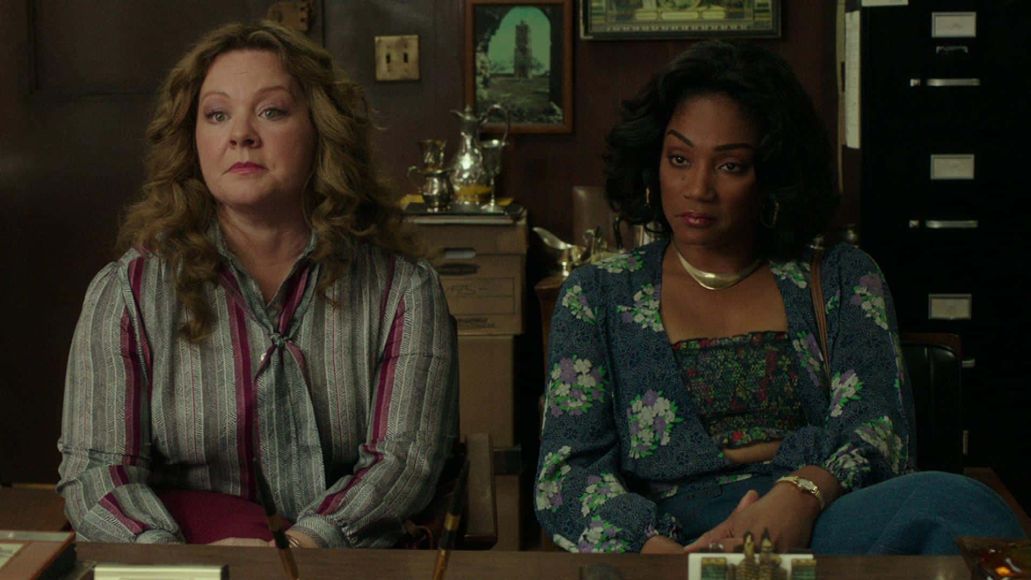 “You can’t put a price-tag on skilled laborers” Kathy smirks. Feel that shakedown energy? The euphemistic talk-talk? It gets even better, snarkier, delivered confidently at a clip. This little chat is over the construction of a 28-story building, and Ruby and Kathy are trying to strong-arm a diamond-shop proprietor that’s footing the bill. He’s an old Hasid, and has opted for a Brooklyn labor deal under Italian mobsters.

This kind of shakedown? Normally, broad-chested boys (maybe named Moose or Rocco?) would ensure that local construction/lawyers/politicians know that it would be a real shame if something was to happen to them or their loved ones. And, well, Kathy and Ruby? A one-two punch of threats and coded jokiness delivered by two talents at the peak of their star confidence.

The way Berloff tees up said scene, letting it ride on what a trio of emerging top-line stars can bring, is smart. And this is The Kitchen’s best trick: Making maxims actually feel like entertainment. This scene and many like it are well-acted, fast-moving, and even a little funny. And Berloff uses familiar beats at a clip to make The Kitchen move like a page-turner. What’s next? What’s that crazy cousin gonna do? Will the bread-maker pay? And can the wives climb the ladder without pushing each other off?

Rogue’s Gallery: Haddish is married to Kevin (James Badge Dale). He treats her like dirt, but Haddish, as seen in her comedies, can walk into a room and not take shit from anybody. When Kevin is confronted with Ruby’s success, and he acts like a complete jerk to her? Her one-up is easy: mocking his lack of bedroom skills. Point Haddish. Her character’s both funny and a bit scary. And Moss’ Claire, she’s the victim of abuse, early and often. But the way Berloff writes Claire, and how Moss plays it, goes well beyond poetic justice. Claire becomes an agent of chaos. Moss puts Claire on edge with spooked eyes nimbly, branding knives, pulling a pistol out of her purse at a cat-caller. Watching her creep men out is tops. And as for McCarthy: She’s the mother, the killer, the brain, and the brawn. To co-opt the old slang, she’s the heart and soul of The Kitchen, both guilt-ridden and gutsy. (Think Tony Soprano, but way more likable, and far less dubious in intent and design.) Kathy’s a riff on the classic antihero; a person that does bad things, but manages to be sympathetic in the same breath.

Out of The Kitchen: We’re still addressing the gender pay gap, women have to fight tooth-and-nail for equality in the workplace. Men are still – and will likely always be – threatened by strong women. So, it’s with a certain degree of enthusiasm to share that The Kitchen has a simple message: Don’t resent your wife’s successes — especially dumb husbands.

Watching three women take charge in a hyper-violent, male-dominated environment is improbable, perhaps. And in a way, the 1978 time-jump may make the male stupidity seem more aggressive, and wives’ victories cheaper in their payoff because of some unspoken “it was harder back then” mantra.

Yet this is pulpy comic book stuff after all, and a lack of dramatic nuance doesn’t make the universality of these women’s struggles any less legitimate. Claire’s husband is violent, Kathy’s husband is a passive-aggressive wet blanket, and Ruby’s hubby is just an asshole. They’re crazed, needy, and insecure. But guess what? The Kitchen is here for none of their bullshit. What a welcome refresher on boys’ club fodder. 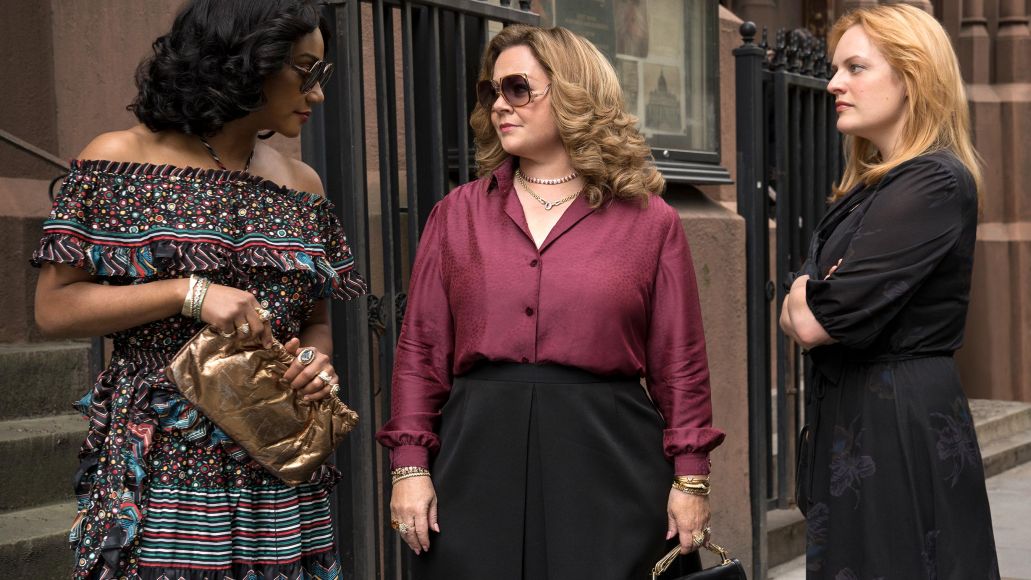 The Verdict: At its most basic, this is a conventional talkie, rooted in Warner Bros crime history, happy to play with cliché. At its most audacious, The Kitchen is a welcome flip on the generally male-dominated script. And at its most pleasing, this is a popcorn flick, with big moments, great pops, and three stars giving it their all, having one out in the street, making big moves for the people. Bad ladies and big business for fun and profit. And most valuably, here’s a solid caper about getting out of your damn wife’s way when she’s the bread-winner. The Kitchen plants a fine heel firmly in the annals of pulp and crime flicks, and comes out packing heat.