The Pitch: It’s been dubbed the “Black War”, a period of violent conflict between aboriginal Australians and colonists from the British Empire. This era was marked by racism as the British took control away from the indigenous population through the 1820s and ‘30s. Hundreds of British and nearly a thousand Australians perished in this land-grab. Over 160,000 white prisoners were also there in penal colonies, forced into labor, and abused as a lower class: political prisoners, Canadians, the Irish, and many others. Point blank, it’s a history in captive states. The rich against the poor. The ruling class, uncaring in its assumed rightness, decimating natives. This is about the cultural, the racial, and the industrial. This is the legacy of hatred that toils beneath the surface of The Nightingale, a story of two lost lives forging a way toward a dangerous future.

Clare (Aisling Franciosi) is a 21-year-old Irish convict living in Australia, or more precisely Tasmania, in 1825. Like so many others, Clare is the product of English subjugation and de-location. Her ‘charge,’ or master, rather owns and abuses her. Through it all, she yearns for freedom, but quietly; an admission of want would result in harm. Elsewhere is Billy (Baykali Ganambarr, in his screen debut), an aboriginal tracker who has suffered great losses. Several of his male relatives were slaughtered by the Brits, but it would seem that some of the women were mercifully able to escape the occupation. Billy harbors deep, bleeding resentments toward whites, and the British in particular. Clare and Billy seek to right the wrongs enacted against them, partnering to kill the English bastards that destroyed her life. Together, their hate guides them.

Jennifer Kent’s follow-up to The Babadook works as a different kind of exercise in dismay. This is a political and historical thriller cut from a specific and yet universal cloth. Rooted in the spiritual rot of the “Black War,” Nightingale takes real history, and mines it for raw storytelling about the limits of excessive violence, and the toll that subjugation ultimately takes on a person. 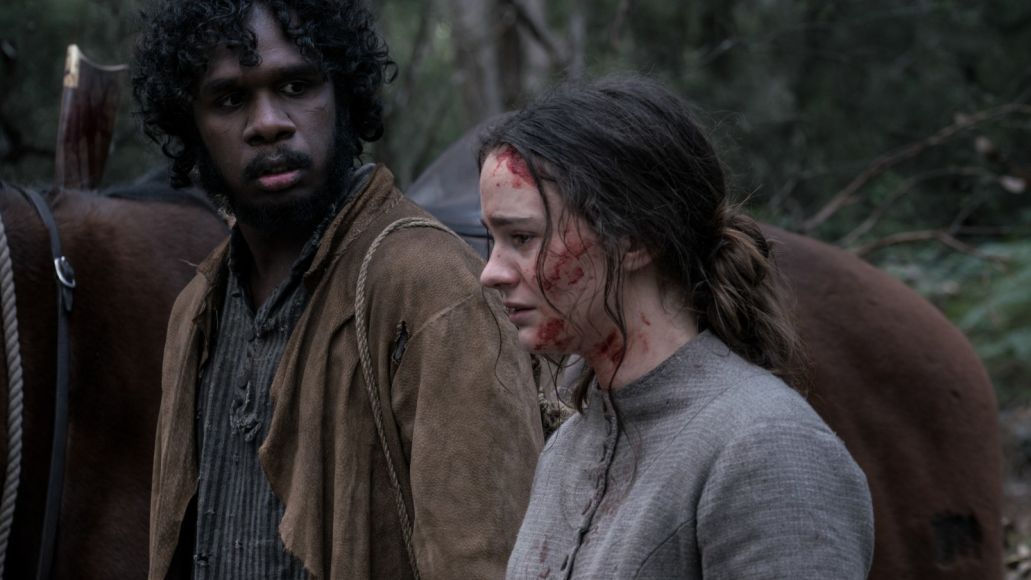 Dark Necessities: Kent dares to share a dark history, and the dour tale it produces. At the outset of the film, Clare is already penal property and the victim of multiple rapes at the hand of her captor, Captain Hawkins (Sam Claflin). When Hawkins is scorned, rejected from a job, or not given instant sexual gratification from Clare, he retaliates swiftly and with brutal force.

Brutal is the operative word, and Kent does not pull a single punch in setting the tone for the world The Nightingale occupies. To call it a “rape revenge” would be tawdry, or avoidant. Kent reaches farther, digs deeper. Opening shots, intended to show a loving Clare doting on her baby in the woods, are punctuated with inserts of her wielding a knife, side-eyeing the spindly trees inching just a little too close to her.  The gray-brown color schemes, the discomforting conversations, and general (but accurate) dimness make up this film’s aesthetic. It’s anti-sensational.

There’s something to Nightingale’s framing that makes it a hard-charging polemic — not mere chase and gutting fodder. And there is room for hope, for justice. It’s just buried deep in the Tasmanian bush, and it has to be earned. Kent calls upon psychological elements in Billy and Clare’s character, and Kent meaningfully challenges the healing notions of violence and reciprocity. 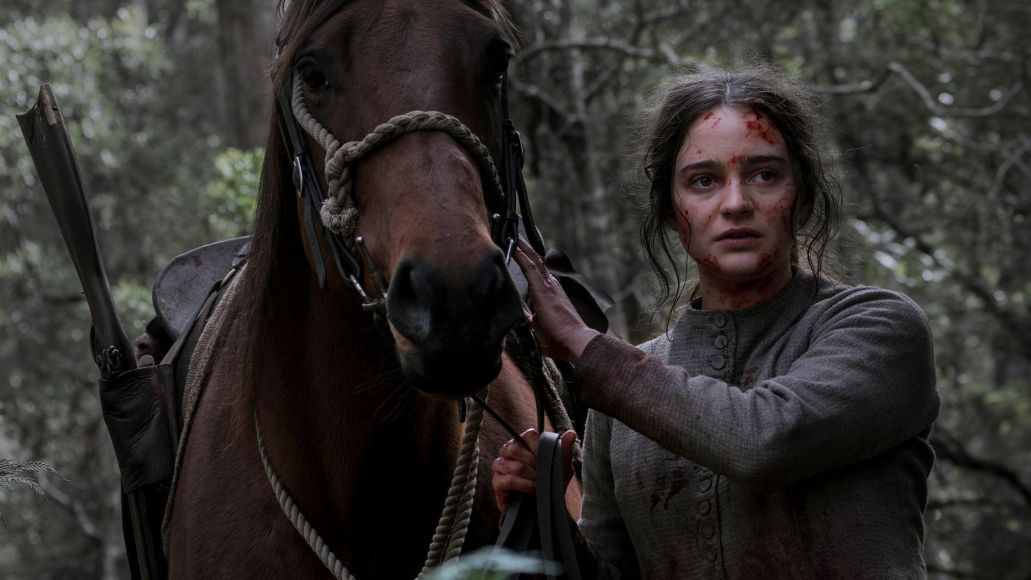 Clare and Billy are the downtrodden, and Kent firmly sympathizes with their separate plights. Clare is perpetually haunted, and Franciosi has a knack for conveying a deep sense of woe. The suffering she endures, the difficulty she embodies in taking arms against others, it’s a quiet, meaningful transformation. Kent bombards Clare with hallucinatory baby screams, and blackened visions of her husband. And Clare’s left to deal with that through limited resources and withering resolve. One hopes she can rise above the vicious, but her mind is ill at ease. It’s a tightrope.

As for Billy, he possesses a quiet respect for his heritage and past. Even when left with nothing and paid morsels by whites, he views himself with pride. He’s the self-proclaimed “Mangana,” and he flies “high over the mountains.” The two set out, united, ready to reclaim what dignity they can. There’s a classical stoicism and natural rancor to Billy that could fit into many better Western archetypes.

History Repeats Itself: While Kent never exploits, or tries to directly abuse or provoke her audience, The Nightingale still makes for an at-times excruciating effort. Clare’s assaults occur at random, numerous times throughout the film, and each chips away at any hope of a future decency. Kent’s instinct is to drive the point home through repetition. Repeat nightmares, haunting Clare, warping her mind with visions of her now-bygone life. The plot works its way through walkabouts that seldom leave their sights unseen. There’s a lot of wandering in the woods, ranging from pained to irate in mood.

This may seem redundant and sodden for the sake of being so, but consider the reasoning. The effect will leave a bitter sting of catharsis when wrongs are righted, but again those are hard-fought. Kent doesn’t want things to go easily. Clare’s murder of another man by gun stock to the head is both pulp traditional, and cringe-inducing. What’s the target, the read here? For a fleeting moment early on, Clare gets what she wants, but does eye-for-an-eye work? Do 12 subsequent stab-wounds enacted by her feel better than just one? The Nightingale’s distinct aim is to convey, through carnage, that violence begets violence. Hate passes on. People learn slowly. If Clare struggles to harm someone, Billy will jump in and finish the job, and vice versa. When Hawkins demands that a pre-pubescent boy murder an aboriginal woman, the bitter lessons in inheritance are made clear. The pain doesn’t stop. The Nightingale has the nerve to say uncomfortable truths about the very blackest parts of men’s hearts.

The Verdict: The Nightingale has the courage to show extremely difficult things: the unflinching tragedy, the elegiac sense of place, the hope for retribution. Yes, it’s hard to watch. Yes, it’s also tense and compelling and worthy of hearing and seeking out. The Nightingale manages to give some senses of closure, of weight, and guilt for everything that transpires.

Kent takes her time with the film’s depictions of atrocities. The mood is hurt, slow, like a knife taking too long to finish the job. The Nightingale has the will to be disquieting and uncomfortable. The sluggishness and use sporadic outbursts are design. You can never escape the past, so please, think on the future. Be better or mindful if the viciousness may seem just. The Nightingale has a torn – and riveting – conscience.

Where’s It Playing? New York and Los Angeles beginning August 2nd, with an expanded limited release in the following weeks.

Film Review: The Nightingale Revisits an Ugly Side of History With a Torn Conscience