The Pitch: Bernadette Fox (Cate Blanchett) is an odd duck. The wife of computer programmer Elgin Branch (Billy Crudup), coasting on Microsoft money, she spends her days wandering her handsome-but-messy townhouse, talking to her Indian virtual assistant Manjula, and supporting her whip-smart teenage daughter Bee (Emma Nelson). But she’s more than just an eccentric stay-at-home mom: Just a few years ago, she was an acclaimed young architect, a shining star in the world of building design before unfortunate events steered her back towards motherhood. As her behavior in their sleepy upper-middle-class California suburb grows ever more erratic, including some brushes with busybody neighbor Audrey (Kristen Wiig), Bernadette up and disappears, leaving Elgin and Bee to figure out where she’s gone, and if she’ll ever come back.

Oh, There You Went, Bernadette: Here’s the thing about Richard Linklater’s adaptation of the acclaimed novel by Maria Semple: Unlike in the book, the question of where Bernadette has gone is very much not a mystery, which is just one of this milquetoast indie’s many problems. Where Semple’s book uses Bernadette’s disappearance to examine the character through the lens of Bee, a daughter who loves her mother but maybe doesn’t know her that well, Linklater’s movie is Bernadette’s through and through. Rather than discovering her true past as an architect along with Bee, we’re told about her history within the film’s first few minutes.

Where the book hides Bernadette’s true destination, the movie starts with a flash-forward of Bernadette on a kayak in the Antarctic, and we work backward from there. Even the film’s final half (which cuts between Bernadette’s journey to get to the South Pole for her next bit of creative inspiration and Elgin/Bee’s attempts to find her) feels like little more than an excuse for some admittedly-beautiful nature photography of chilly glaciers and desolate Antarctic landmasses. When Elgin and Bee constantly worry about whether or not they’ll catch up to her ship, or fret that she might have gone overboard, we know she didn’t; we just saw her sneak onto another vessel.

There’s something to be said for trying new things in the process of adaptation, but this feels tantamount to telling us right off the bat that Amy from Gone Girl faked her own disappearance: without the mystery, even a minor one, there’s little left to chew on. 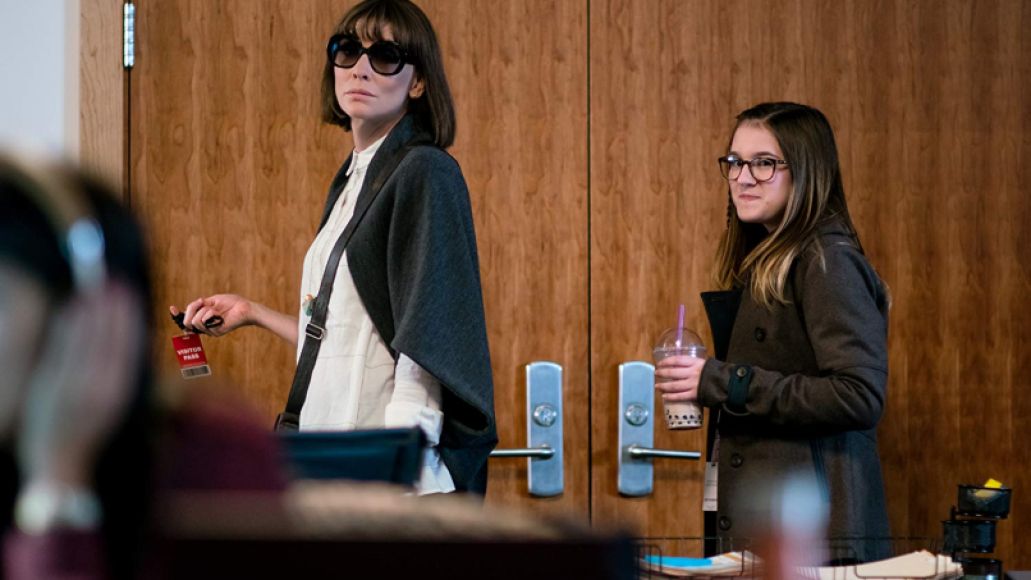 Blanchett Statement: Independent of these flaws, Bernadette serves as a vehicle for Blanchett, who inhabits the character with the kind of fearless intensity we expect of her at this point. However, Bernadette herself feels like an amalgam of so many previous Blanchett characters without having dimensions of her own: she’s basically Jasmine from Blue Jasmine with a few shades of Carol‘s domestic suffocation, a woman on top laid low by the realities of commerce and family life.

To be fair, it’s still a joy to watch her work, Bernadette fluttering around a room fussing with every little thing and peering judgmentally over giant Iris Apfel glasses at the everyday people she just can’t relate to. But try as she might, Blanchett fails to wrangle a script (co-written by Linklater along with Holly Gent and Vincent Palmo Jr.) that can’t quite decide if she’s actually going crazy or if she’s a victim of gaslighting and circumstance.

Sure, she’s an insomniac, but that doesn’t make her a monster. Her cold war with Audrey is painted as her fault when it’s Audrey who hysterically fakes getting run over and sabotages the other moms against her. Even her husband is painted as the reasonable one for seeing that his wife needs help, and yet it comes across as him pushing her away because she’s difficult to handle. Linklater thinks he’s selling Bernadette as a beleaguered artist losing her mind due to creative atrophy, but it comes across as one long case of upper-class white gaslighting. 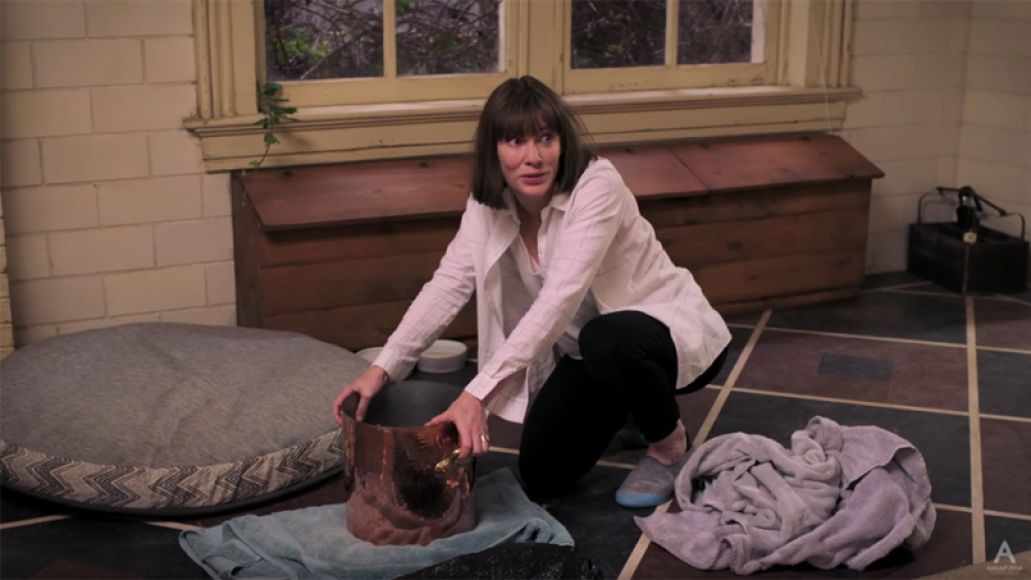 Creative Freeze: In Bernadette‘s opening moments, Bee (who narrates much of the film, even though we don’t get much of her perspective otherwise) talks about the brain as a “discounting mechanism” — how our minds are hard-wired to consistently crave new experiences as an evolutionary trait. For a creative person like Bernadette, Linklater argues, to stifle your creative instincts out of a sense of family obligation or professional embarrassment (or in Bernadette’s case, both) will lead to madness and misery. “People like you were born to create,” says one of Bernadette’s old architect friends (Laurence Fishburne), one of many characters who sing her praises either in scenes or in a hokey ‘video essay’ that serves as blunt exposition for Bernadette’s architectural past.

In some respects, this material feels perfectly suited to Linklater’s gentle sensibilities — a quaint family drama about the ties that bind and the ways in which everyday circumstances can steer us from our intended paths. But as trite as the film’s cookie-cutter messages about the power of creativity are, Linklater et al. don’t even focus on them long enough to make them feel significant one way or the other. Instead, Linklater opts to basically make Gone Girl into a hangout movie, which would sound fun if the characters were interesting or vibrant. At the end of the day, the stakes of Where’d You Go, Bernadette? feel like champagne problems, brief subplot about identity theft (featuring James Urbaniak as a dweeby FBI agent) aside. 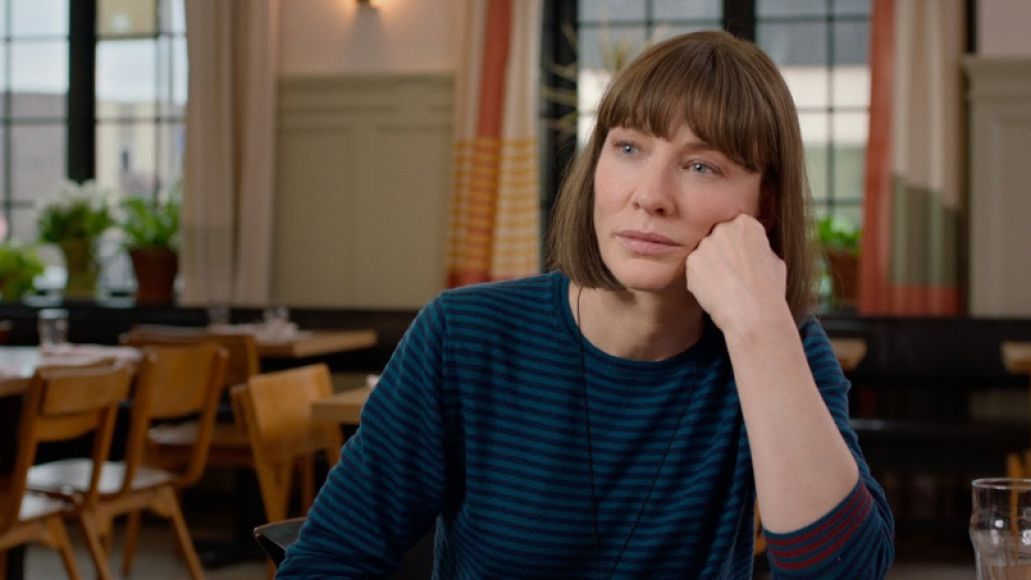 The Verdict: Linklater’s hardly a consistent director – he has just as many hits as misses – but it’s particularly disappointing to see him miss the mark as madly as he does here. Not quite a domestic mystery, not quite a fascinating character study of a frustrated creative, Bernadette feels half-hearted in just about every respect. Yes, there’s something to be said for the existential malaise that can befall someone who tamps down their creative spirit out of obligation; but it’s hard to feel sorry for a character who’s own crisis is so vaguely drawn, and who can throw enough money at the problem to easily solve it with an ounce of communication. Who cares about rich folks feeling creatively unfulfilled when they have enough money to flit to Antarctica at a moment’s notice?

Where’s It Playing?: Where’d You Go, Bernadette? packs up its troubles and sneaks off to theaters August 16th.

Film Review: Where'd You Go Bernadette? Is An Uncreative Movie About Creativity