Nearly 140 of the most prominent musicians — including Foo Fighters, Lizzo, Billie Eilish, Ariana Grande, Lady Gaga, Kacey Musgraves, Beck, and Bon Iver — have signed a letter backing the Planned Parenthood campaign #BansOffMyBody. The initiative spreads awareness about the surge of restrictive anti-abortion laws that are being passed in states all across America under Donald Trump’s administration.

“Those who signed are urging their social media followers to take action against these bans, and learn more about the threat to safe, legal abortion access in communities across the country,” reads a press release from Planned Parenthood. “Specifically, the artists are asking their supporters to add their name to a national petition calling for an end to the abortion bans, with a goal of collecting half a million signatures by the anniversary of Roe v. Wade in January 2020.”

In a statement, the 17-year-old Eilish remarked, “I’m proud to be standing up for Planned Parenthood as they fight for fair and equal access to reproductive rights,” adding, “We cannot live freely and move fully in the world when our basic right to access the reproductive health care we need is under attack. Every person deserves the right to control their body, their life, and their future.” 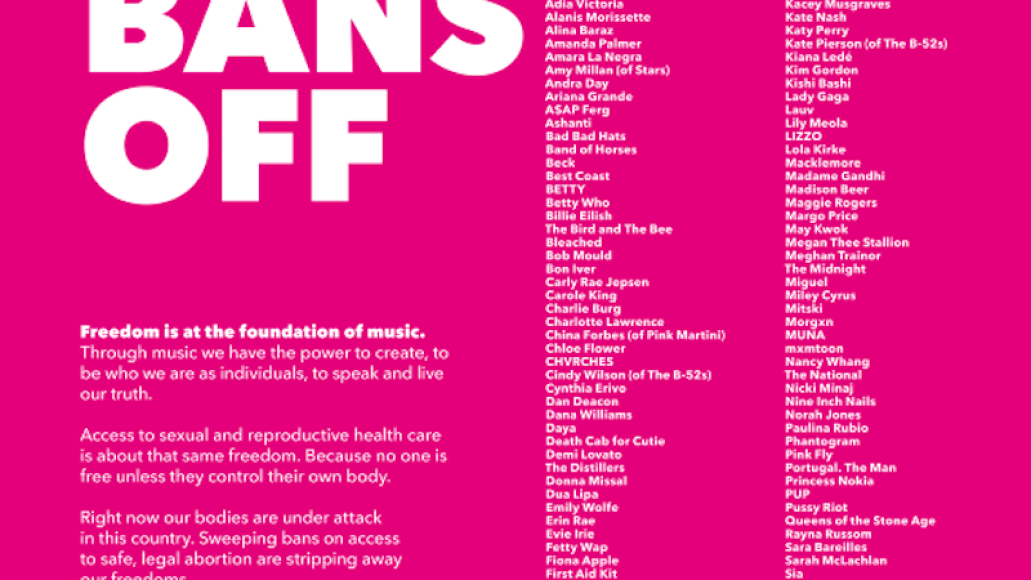 To add your name to the list and/or learn more about #BansOffMyBody, head to the campaign’s official website.

Since January, more than 300 anti-abortion bills have been filed in the US, with 24 of those already in effect. This week, Planned Parenthood lawyers are working to delay one such law in Missouri.

As The Missourian reports, the law is scheduled to go into effect on Wednesday and makes abortion illegal — even in cases of rape or incest. The state already is plagued with some of the country’s most restrictive regulations and currently has just one clinic that performs abortions.

Planned Parenthood has called on the entertainment industry for support in the past. In late 2017, the organization teamed with Foo Fighters, Sleater-Kinney, and Sharon Van Etten, and more for a series of 7-inch releases. Planned Parenthood also recruited the cast of The Handmaid’s Tale for a PSA about abortion this past June.