Setting the Stage: On Friday, a devout group of Elliott Smith-inspired musicians gathered at Brooklyn’s Littlefield to remember the masterful songwriter on the week of what would have been his 50th birthday. Less than one mile from his former home and bathed in an aptly blue light, Littlefield transformed, only if for a night, into a Smith-style sanctum to house a career-spanning sonic eulogy as humble, affecting, and memorable as the man himself.

The evening was a mirror into what I’ve come to know and love about the late Elliott Smith — that beneath the most subtle gestures in music and in man lie the deafening dramatic moments that stop you in your tracks and peel back a layer of flesh to reveal muscle heavy with emotional dissonance. Moments that cut through the static to say, “I am here. I feel it, too.” And it was this sentiment of community, of unwavering kinship in the face of a few charming false starts and key changes, I took home at evening’s end.

Taking the Stage: We come to the music that makes us from all walks of life. Yet, as we set off from a song in different directions, a brief moment in time and a very certain collision of notes and letters sees us meet among the same lyrics. With this understanding, I found a review of the evening to be an inadequate representation of not only a one-man pop monolith, but the people taking the stage. Instead, I asked a few of the musicians gathered at Littlefield to reflect on their own connection to Elliott Smith. Some are long, some are short, but I’ve found a piece of myself in each little word-room they’ve crafted all the same. 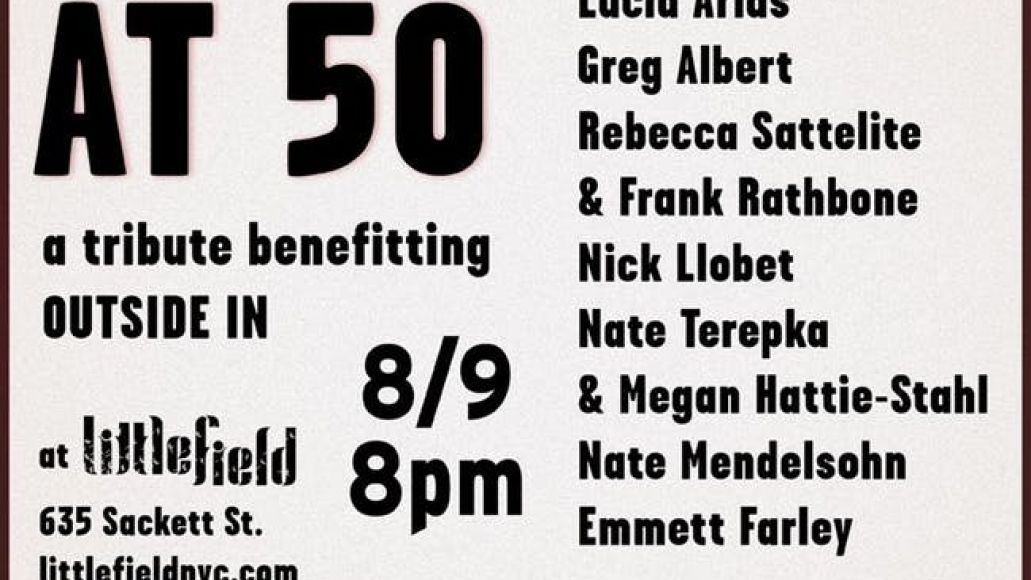 Isaac Gillespie: “[Elliott Smith] chose to make the songs that fewer people really needed rather than those that more people didn’t and that’s why the people who love him really love him. His songs work like hymns; they tell you, yes, the hard times are really true and you’re not alone in visiting them. Elliott Smith will never tell you everything is gonna be alright; that’s up to you to decide. He says something more powerful and more needed — I see your suffering and can tell you it’s true.”

Joanna Sternberg: “Elliott Smith is the reason I write songs. I never thought I had any business doing it until I heard him sing. I always wanted to write songs with words, but I was not coming up with anything besides melodies.  His songs made me feel like I was not alone in a way that healed and woke up my heart. For this reason, it is impossible for me to have a favorite Elliott Smith song. On another note, I don’t believe in picking favorites in the sense of the definition of the word … especially not from Elliott Smith.”

Megan Hattie: “I discovered Elliott Smith as a teenager growing up in small town Oregon. His music had a familiar PNW dreariness to it, yet it also filled me with hope.”

Paige Johnson-Brown:  “Has his music followed me, or have I followed it? Hard to say. Ingrained either way and thankful and better for it.”

Julian Cubillos: “Elliott Smith’s search for truth and belonging has kept me afloat through some of my toughest times. His style and his genius have left a whole generation of songwriters in his debt — myself included.”

Katie Battistoni: “He reminds me what I can do with minimal notes or tracks, or undermined clichés from spoken language. Elliott’s a needleworker, patching simple bits into something intricate and warm.”

Favorite song: “My favorite thing Elliott Smith has ever recorded is the first two seconds of his first big release, Elliott Smith, when the second guitar track on “Needle in the Hay” enters the left ear with an unapologetic hiss. The hiss is almost louder than the guitar. It’s such an unusual and affecting production choice — the sound of big nothing.”

Mel Flannery: “The biggest way Elliott influenced me was as a songwriter. Realizing that vulnerability lets a listener really love you and that you can write the saddest song with a catchy guitar riff in a major key. He didn’t care about conventions, but he also played within the lines enough that it felt so comfortable. I just f***ing love his songwriting. A true master. Equal parts rule breaker and cozy sweatshirt at the same time.”

Emmett Farley: “I think the thing I learned from Elliott Smith was how deep a song can come from. You could hear every bend and twist through his songs from all the down at the core of his being. He didn’t sing loudly, but he made it worthwhile to lean in.”

Favorite song: “Between the Bars”

Nate Mendelsohn, Market: “Like anything of great and sustained meaning, Elliott Smith’s songs and recordings have meant different things to me at each stage of my life, but have never grown less important. As an angsty teenager, there is something undeniably resonant about the feeling of his songs.

“As a lot of my favorite music from that time has grown less and less valuable to me, Elliott’s has remained in rotation, and my connection to his songs has grown and morphed. I’ve come to appreciate the little slips of weird harmony, injected into cycles that otherwise reappear time and time again across his songbook. I’ve come to see his meticulous studio craft as one of a kind — whether in his early phase of double-tracked acoustic guitar and vocals or his full-blown orchestral rock sound, his recordings put me in such a distinct sound world. And, yes, as I’ve supposedly become an adult human, I’ve seen that the words and moods in his songs are not confined to teenage angst at all, but instead get at a lot of the truest (and toughest) parts about life, at any age. As I’ve grown up, I’ve only become more and more convinced that his enormous body of songs is the one that means the most to me.”

Favorite song: “‘I Didn’t Understand’. Whether played on guitar, piano, or in vocal chorale as it appears in the album version, it feels like a completely organic musical thought unfolding. It drips out like a weird syrup. Gets me every time.”

Thank you the Littlefield, to Isaac GIllespie, and to each of the musicians who took part in bringing Elliott Smith at 50 to life. While they are not all represented here, you can find their names on the poster above. Of course, endless celestial gratitude to Elliott Smith. In his own words, “I’m never gonna know you now, but I’m gonna love you anyhow.”