Vince Gilligan loves to suspend his audience. He did it for five straight seasons of Breaking Bad. He’s done the same for Better Call Saul. He’s relished that power all year as fans wait on pins and needles for El Camino. It’s his brand. It’s his strength. It’s why we sit here out of our minds obsessed, scratching for details like buyers of Baby Blue.

Although he’s kept most details close to the chest, he’s revealed a few cards over the past month or so. Look closely in the first teaser and you can see both Hank (Dean Norris) and Gomez (Steven Michael Quezada) have since been memorialized. Do some math with the second and you’ll learn that Walter White (Bryan Cranston) perished at the Nazi compound.

Today, though, we were given a whole kilo’s worth of information with the new trailer. For a little over two minutes, Gilligan takes us back to the streets of Albuquerque, New Mexico, where Jesse Pinkman (Aaron Paul) is on the run from everyone — the authorities, some ne’er-do-wells, and even himself. But, as with anything, there are minerals to mine.

Wanna Know How I Got These Scars? 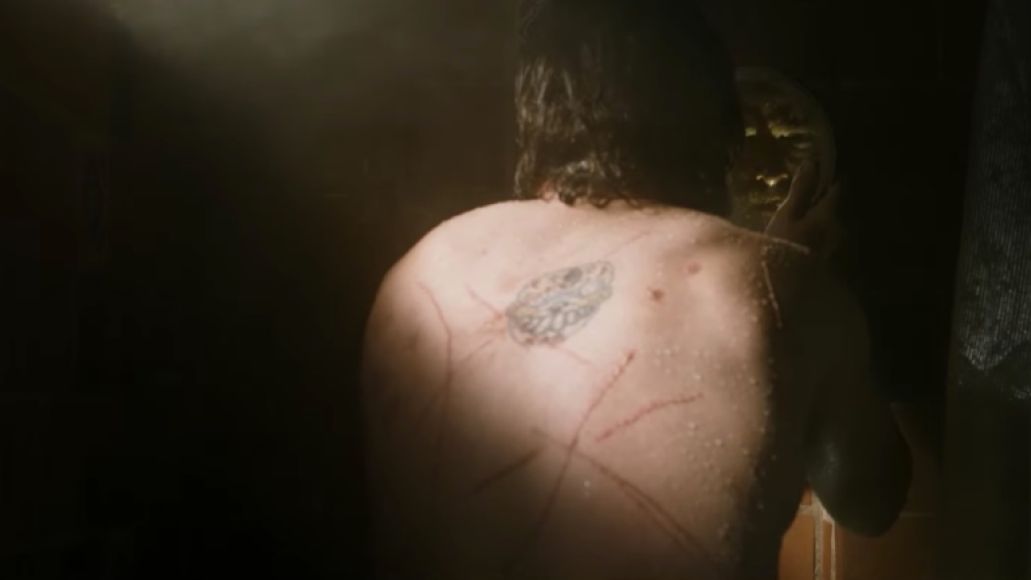 We knew Jesse had it bad with the Nazis. Hell, even Walt looks appalled when he reunites with his colleague at the compound. But, this trailer fully reveals the extent of Jesse’s physical torment, highlighting the scars on both his face and his body. The terrified reaction from Skinny Pete (Charles Baker) and Badger (Matt Jones) — ever the reliable medium for jokes and yucks throughout the series — says it all: The shit has hit the fan.

A River Runs Through It 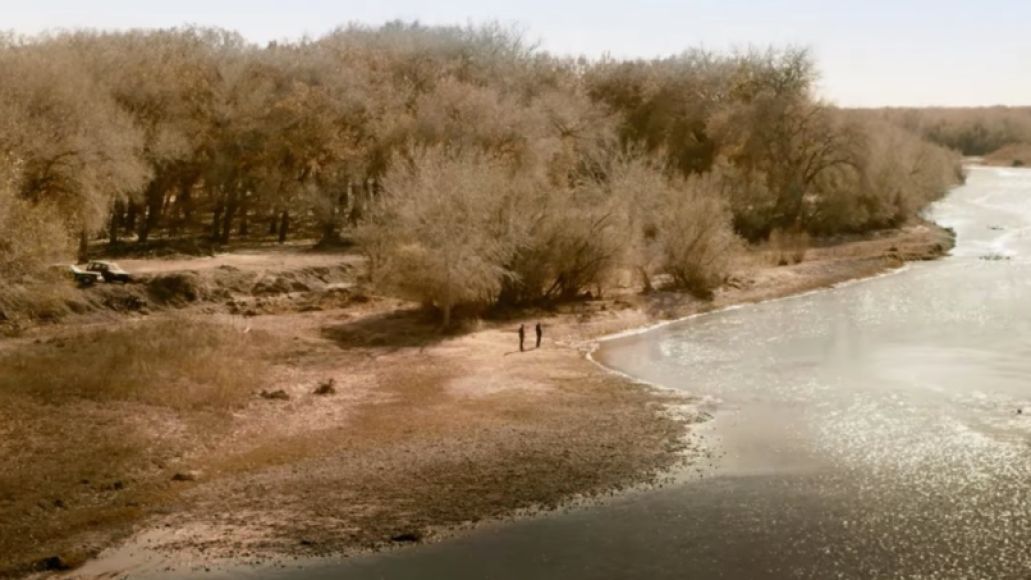 Takeaways are nothing if not presumptuous, but the image of the river can only conjure one memory for Breaking Bad fans: the death of Mike Ehrmantraut (Jonathan Banks). If you recall, the cop-turned-drug-kingpin-everyman died at the hands of Walter White towards the end of Season 5. We never really see what happened to the body, though. Presumably, Walt took care of it. Or maybe he didn’t? Seeing how Banks confirmed his appearance in the movie, and Ermantraut was something of a psuedo father figure for Pinkman, maybe Jesse’s going to give him a proper burial? Or maybe he’s chasing some money or weapons that only he could have known about driving around with Mike all those afternoons? Then again, he could just want some time to reflect. Rivers are magical like that.

Brock On the Mind 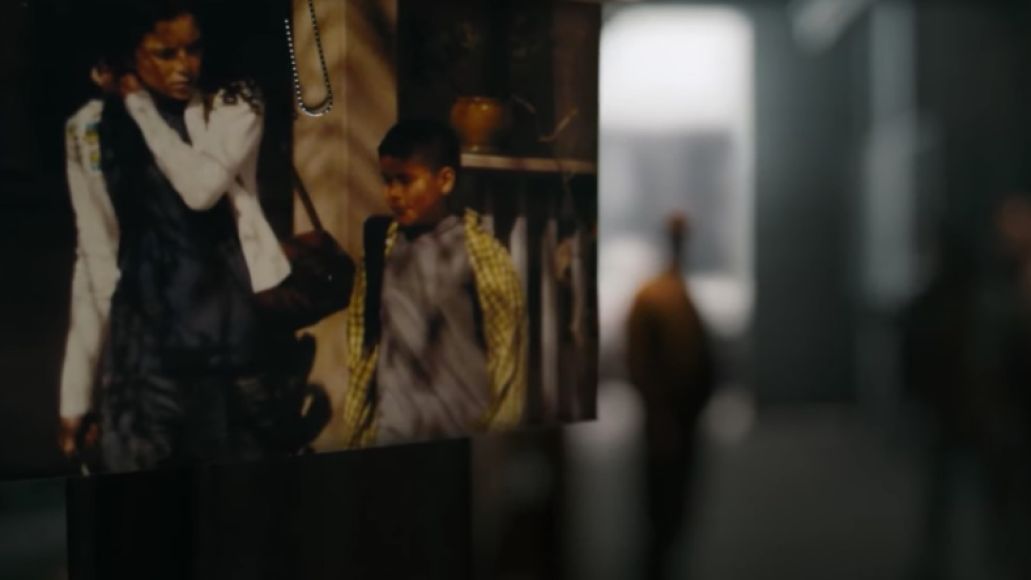 Nobody shoulders more guilt than Jesse. Looking back, it’s his own guilt that became his downfall — tossing around all that money did him zero favors in the end (nor anyone else, for that matter) — and it’s only been compounded since then. While one could argue he’ll still be harboring some remorse for Jane (Krysten Ritter), especially since Walt confessed to her death, there’s no doubt that Andrea (Emily Rios) and Brock (Ian Posada) will also be on his mind. Let’s not forget, in addition to being tortured by Meth Damon (Jesse Plemons) and fed leftover ice cream in a dirt pit, the Nazis also killed Andrea after he tried to escape, leaving Brock a foster kid. Knowing Jesse, this entire jaunt will be to make amends for Brock, similar to how Walt knew he had to somehow get the money to his family. 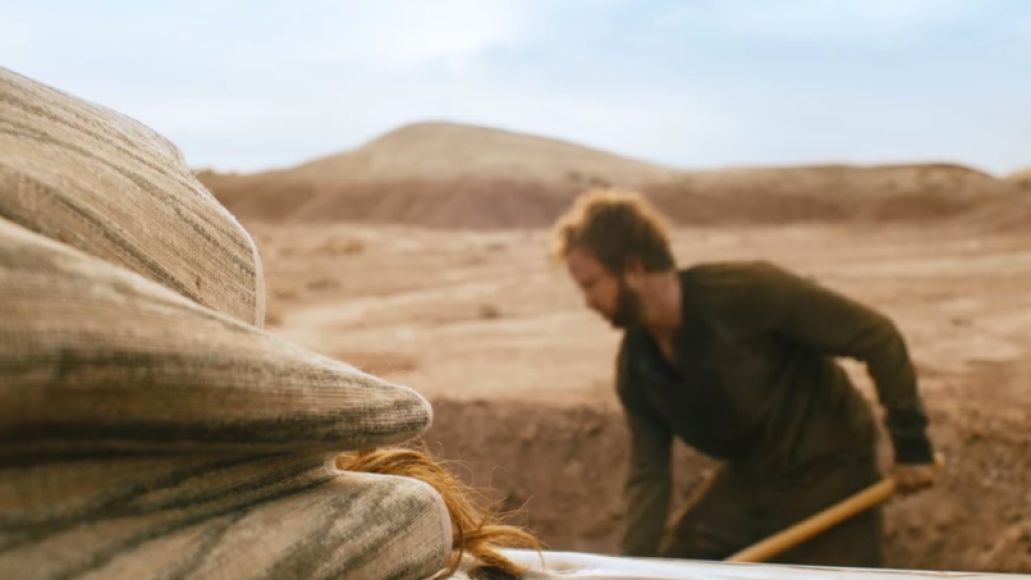 When we see Jesse digging out in the desert, he’s clearly come straight from the Nazi compound. Notice that he’s still all Grizzly Man, what with the burly beard, shaggy hair, and his disheveled green fatigues. But zero in on that hair in the foreground. It’s red, auburn even, and that doesn’t really jive with anyone who was actually at the compound. Maybe he picked up someone on the way? Maybe he had to ice someone? Either way, he’s disposing something, which suggests Jesse has more than dirt on his hands. What’s more, it’s probably not the last time he’ll be digging, at least in a metaphorical sense. Having been locked away for months, and being forced to keep a low profile, the guy has zero means. That means he’s going to have to go on a hopeless scavenger hunt, one that’ll likely prompt him to take a deadly stroll down memory lane.

The House That Walt Built 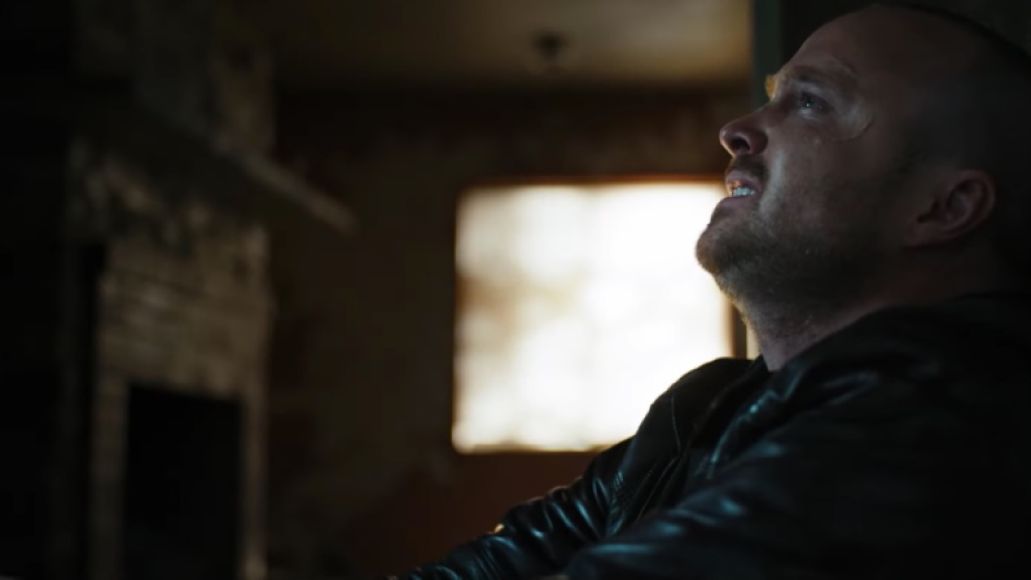 Part of that stroll should lead him back to familiar places for us. In one particular sequence of the trailer, Jesse can be seen hunting down something with a flashlight. Unfortunately for him, he comes up empty as we later see him cry tears of frustration. Look closer, though: He’s sitting in the White residence. Look at the fireplace to the left! It’s possible Jesse, in a desperate move, thought Walt may have left some stacks of bills stuffed in the walls. Or maybe he was looking for that discarded pizza? Okay, dumb joke.

Who’s Gonna Save My Soul? 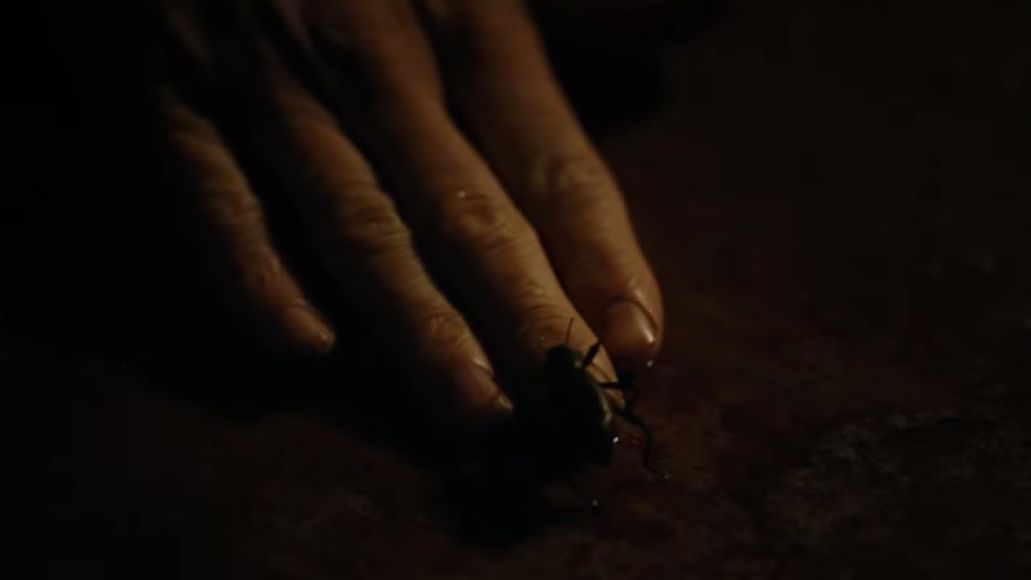 Gilligan loves a good callback, especially if there’s some thematic weight to ’em. One of the more touching nods in the trailer is seeing a beetle crawl over Jesse’s hand. It’s a reference to the beetle he similarly let go at the beginning of the harrowing Season 2 episode, “Peekaboo”. Make no mistake, bugs and insects mean a lot of things in Breaking Bad — “The Fly”, anyone? — but this here image is a glimpse into Jesse’s soul. There’s still a heart beating behind those scars, and he’s clearly still holding on to it. 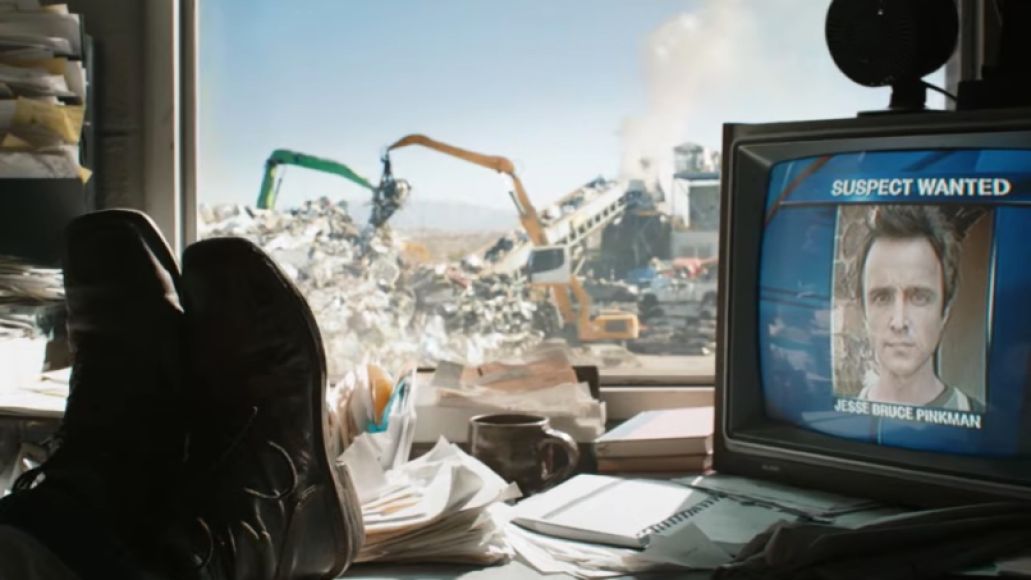 Can’t have a junkyard without thinking about Old Joe (Larry Hankin). The lanky lug has helped Walt and Jesse out of many a sticky situation — hint: magnets! — and it’s possible he might come handy again. All we see are a pair of boots and a news bulletin about Jesse, but c’mon, you’re telling me there’s another more remarkable junkyard dog than Old Joe? Here’s hoping he has some more tricks up his greasy sleeves. 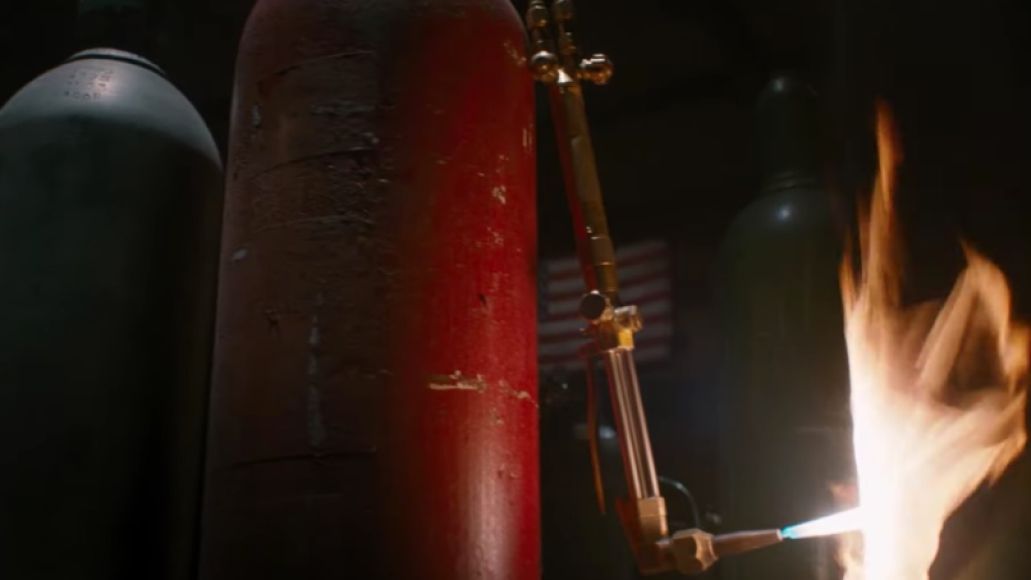 With Walt out of the picture, any ingenuity is up to Jesse. Don’t underestimate the guy. He’s a little older, he’s a little wiser, and he’s taken notes. So, it wouldn’t be surprising if that gas tank there towards the end happens to be Jesse’s version of Walt’s machine gun stunt. Of course, that would also mean there’s someone to go after, which begs the question… 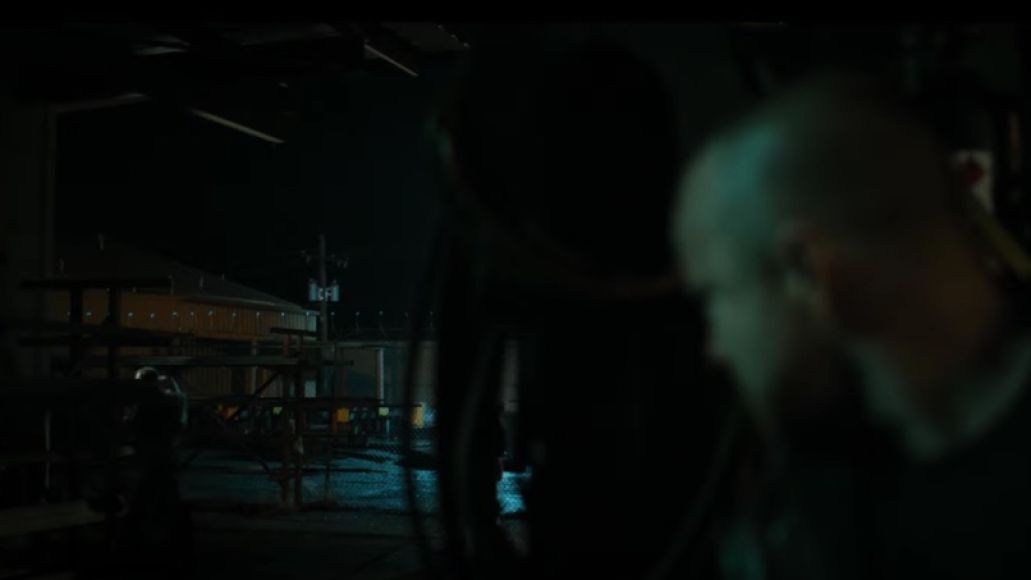 The Nazis were annihilated, the Salamancas were extinguished by Gus, and then Walt took out Gus, and then Walt took out himself. So, who the hell is even left anymore? As Walt says, “There is gold in the streets just waiting for someone to come and scoop it up,” which means someone in New Mexico is either a.) cooking or b.) picked up where the Nazis left off. Whatever the answer is may be who Jesse is going after.

Once Upon a Time in New Mexico 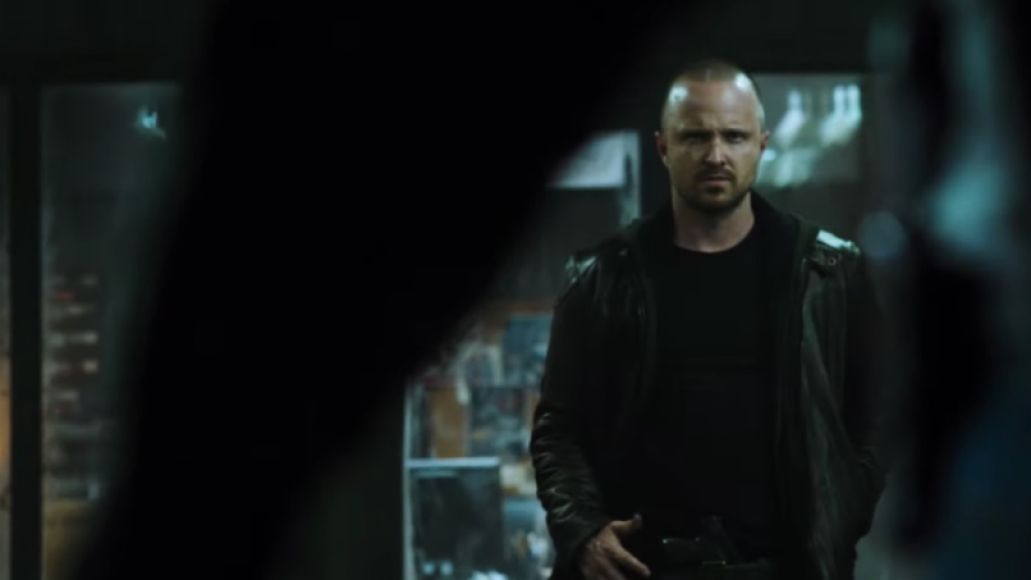 But Jesse’s not the only one doing the chasing. As we see by the end of the trailer, there’s a standoff coming down the line, and while some fans have theorized that voice and curious hand belongs to Robert Forster’s Disappearer, it’s probably someone at a federal level. Now, we have zero clue who is taking over this case — it could be someone familiar, it could be someone new. Either way, they’re going to get to Jesse at some point — you really think Gilligan is going to walk away from those stakes? — and all bets will be off by then. Remember, Breaking Bad is a Western at its core — hell, Gilligan even admitted to shooting it like a Sergio Leone epic — so there will be blood.