Track by Track is a new music feature that asks artists to lead listeners into the depths of meaning behind each track on their latest release. Today, Brooklyn’s Bethlehem Steel share insights on their self-titled record.

Artist of the Month Bethlehem Steel are set to release their self-titled sophomore album tomorrow. Ahead of the official street date, the 10-track effort is being premiered below.

(Read: Artist of the Month Bethlehem Steel on Strength in Numbers and Trick-or-Treating on Tour)

Due September 13th via Exploding in Sound, Bethlehem Steel serves as the follow-up to 2017’s Party Naked Forever. While touring behind that debut record, the Brooklyn trio brought on singer/guitarist Christina Puerto to help fill out the songs in a live setting. The bond that formed between her and singer/guitarist Becca Ryskalczyk ended up being so strong that Puerto was invited to join the band full-time.

Her addition and the resulting dynamic had a huge impact on the songwriting process, especially in the themes that were being tackled. As Ryskalcyzk explained in a press release,

“A lot of the lyrical content on this album is uncomfortable. It’s about men, and being taken advantage of, or abandoned or fucked over. I’ve been playing with the boys in the band for many years and they have always been sympathetic to my experiences, but there are certain things about what women experience that they will never understand, and having another woman as part of the band brought a different comfort and a sense of solidarity. Based on what’s happening in my life, I would still probably have sung about these things, but I don’t know what it would have been like without Christina. It wouldn’t have felt as powerful.”

Preview tracks included lead single “Bad Girl”, “Govt Cheese”, and “Empty Room”, the latter of which Bethlehem Steel explored in our Origins feature. Listen to the entirety of their self-titled LP below. Pre-order physical copies via Exploding in Sound.

For more on the new record, Bethlehem Steel have broken it down Track by Track.

“Sponge”:
“Sponge” is basically about stretching yourself too thin, giving too much of yourself to other people. Trying to figure out how much of yourself you can give before you fully disappear. It started out as two separate songs but felt right to put them together as something that sonically provided darkness and light. — Becca Ryskalczyk

“Govt Cheese”:
When I wrote this I was looking back on a lot of toxic and abusive male relationships that I’ve had over my life. A lot of them made me smaller and were holding me back from becoming a stronger woman. Sometimes you can still feel like you’re emotionally held hostage by them. Trying to find a way to be there but at a distance in order to take better care of yourself. — BR

“Empty Room”:
I wrote “Empty Room” at a time when I was experiencing debilitating anxiety and depression and was so paralyzed/overwhelmed I was unable to even begin to look at what the root cause might have been. It’s basically asking for patience from those close to me — Christina Puerto

“Couches”:
This song is about processing being abandoned by someone very important to you. It’s difficult to perform and was difficult to record the vocals to because the emotions are still very raw. The most tears went into this one and this track is pretty important to me. I feel so grateful that my old bandmate Paul Swenson was able to play cello on the track which makes it feel even more personal and special to me. — BR

“Not Lotions”:
Pat wrote the bones to “Not Lotion” then Christina and Jon fleshed it out. Becca wrote the lyrics. This is the first time we wrote a song this way so it feels pretty special. A lot of times I feel so much anxiety and sadness that I kind shut down or go numb. Writing this I was feeling that. Feeling judged by people because I’m 30 and still play in a band and am broke. But does anyone have their shit together? Doesn’t everyone go numb sometimes? I didn’t cry a lot as a kid. I was just very angry. I hold so much pain inside my body. I’ve been trying to learn to cry and let the anger out instead of it just have me. The end of this song is a release of that. Just letting it go. Letting myself feel something. — Patrick Ronayne, BR, and CR

“Bad Girl”:
“Bad Girl” is about all the nights that my brain keeps me awake. Irrationally telling me I’m a terrible person. Going over and over and over all of the things I might have done to upset or inconvenience another human. This song was incredibly fun to flesh out with everyone as well as record. Christina pulled the end guitar riff out of her ass while recording so that was pretty great to experience. — BR

“Read the Room”:
“Read the Room” is about a time when I left an unhealthy situation but didn’t explain to anyone the true reasons why. I was living with the regret of not sharing the truth with others for one because it wore down on me to hold it to myself and also because I worried (and still do) that someone else might have a similar experience. It’s one of the darker songs I’ve ever written and it felt really cathartic to lean into that. — CP

“Four Aliens”:
Another song about giving too much of yourself to others. Maybe so much that you forget to take care of yourself. When you allow people to suck your life force out of you. Like they’re taking your soul. You feel selfish for trying to take personal space. People trying to decide what’s wrong with you instead of just being there. — RB 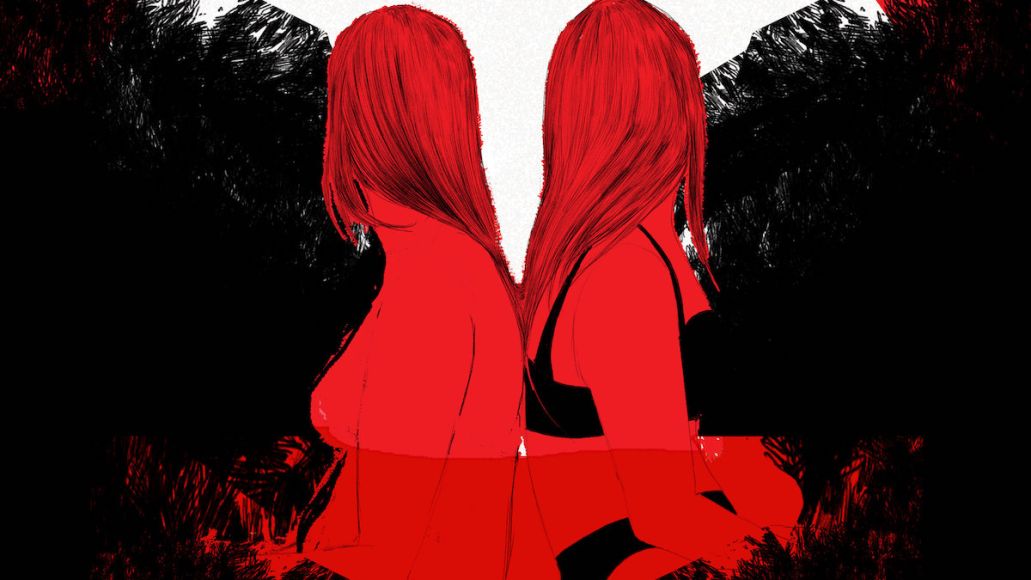 “Sheryl”:
“Sheryl” was the first song I shared with Becca and the group, so it’s definitely special to me in that way. It’s about feeling deep empathy and sadness and anger for someone very close to me that has been wronged/abused, and while processing these feelings seeing occurrences of these same patterns in my own life and acknowledging them for what they are. — CP

“New Dark”:
“New Dark” is a song for women who have spent a lot of their lives just going along with whatever men decide to do to them. Not realizing that it’s wrong, that it’s abuse and that it’s manipulation. The fault of society for normalizing such bullshit behaviors. When talking with other women it’s shocking how many of us have been betrayed by male friends. Who have been taken advantage of while we are vulnerable. It’s shocking the amount of us that would go along with it because we were taught to be nice. The line “I got out of a family that hates women” does not refer to my blood family. I’m talking about past manipulative relationships and people who have made me feel less than because I am not a man. — RB