Canada is known for its numerous celebrity exports, and it appears three of them can all be traced back to one singular family. On Monday, Justin Bieber took to Instagram to reveal that he, Oscar-nominated actor Ryan Gosling, and fellow pop singer Avril Lavigne are actually related.

“This is the best day of my life,” Bieber wrote. His post included a photo of an Ancestry.com family tree showing how he and Gosling are 11th cousins once removed. The “Sk8er Boi” singer, it turns out, is Bieber’s 12th cousin.

The Ancestry chart is a tad difficult to grasp, but Exclaim was able to break it down a bit: “Bieber’s 11th great-grandparents are Gosling’s 10th great-grandparents, with Lavigne’s slightly more immediate family branching off from Bieber’s third cousin nine times removed.” Lavigne also looks to be a descendent of the Dion family, but unfortunately there are no connections to the Celine Dion.

(Read: The 10 Best Bands with Siblings)

All complicated tree branches aside, what is immediately obvious is that these particular Canadian genes are blessed with both entertainment skills and darn good hair. Chad Kroeger, frontman for Canadian rockers Nickelback, has nice lush locks as well, but considering he and Lavigne were once married, let’s hope there are no familial ties between the two.

Check out the post below. You’ll see that Lavigne is already down to “host Christmas dinner this year.” 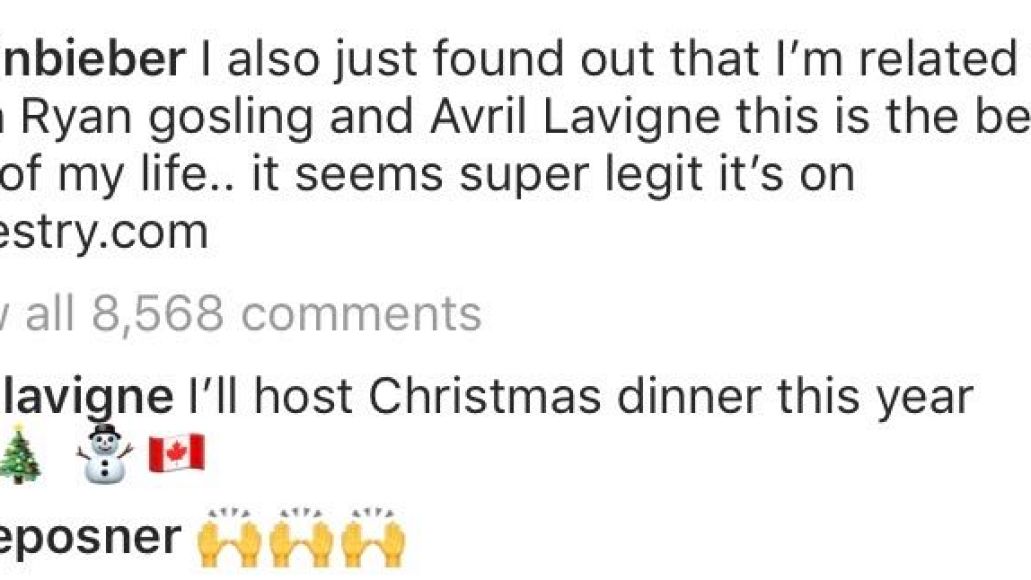 In related news, Bieber recently wrote a lengthy Instagram post about his mental health struggles, drug abuse, and past bad decisions, which include “disrespectful” behavior towards women. Read that here.