The Pitch: Based on Steve Erickson’s cult novel about a loner weirdo who bounces around New Hollywood, Zeroville follows a skinhead Zelig figure who always lucks into legendary surroundings. After being mistaken for one of the Manson crew by detectives (played by Mike Starr and Danny McBride, whom the film sorely misses when their one scene is up), bald former seminarian Vikar (James Franco) falls in with a couple of ne’er-do-wells who drag him into the underbelly of the fabled Easy Riders/Raging Bulls era of filmmaking. He drinks and surfs with Viking man (Seth Rogen doing his John Milius impression), learns how to edit from lonely Dotty (Jacki Weaver), and falls head over heels for zaftig also-ran Soledad (Megan Fox). His infatuation for the actress who can’t catch a break leads him to cut away from his job editing Apocalypse Now (to say the film plays fast and loose with dates and facts would be a historical understatement) to go edit her latest film for a megalomaniacal producer (Will Ferrell, in another, funnier movie). Their romance can only end tragically, as the constant references to George Stevens’ 1951 film A Place in the Sun keep reminding us. 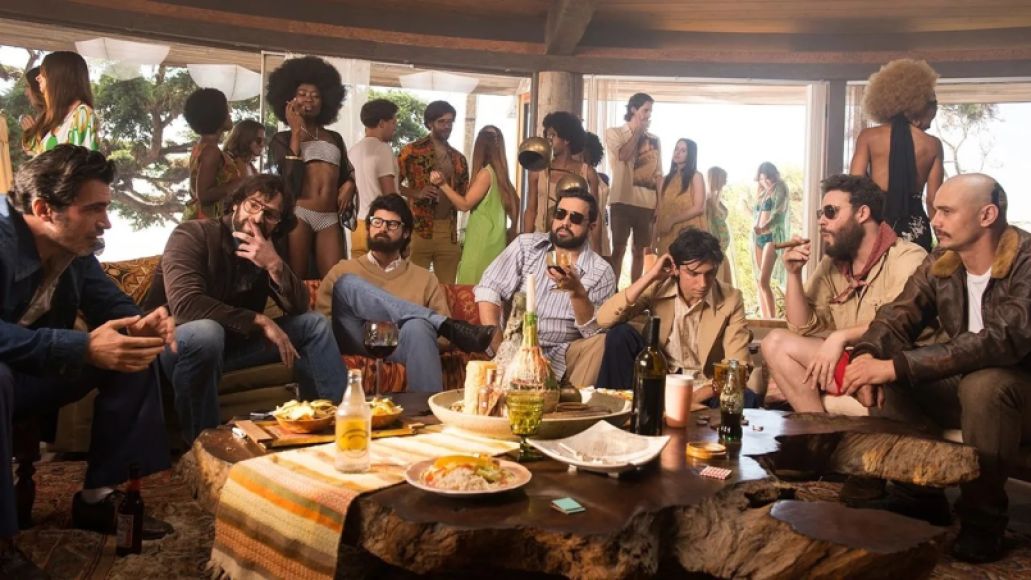 Hollywood Forever: It’s never wise for a script to write in potential reviews in the dialogue. It gives reviewers an easy out, and Vikar’s first brush with real Hollywood after having lived a life obsessed with glamour lines up a pretty cheap one. Vikar’s perplexingly got Montgomery Clift and Elizabeth Taylor tattooed on the back of his bald head (which has to have been something that made more sense on the page) so when he walks in on the filming of Love Story, he tells Dotty it reminds him of their scene in A Place In The Sun. A few minutes of the Ally McGraw stand-in screaming that she wants her boyfriend, Robert Evans, to come on set or she won’t finish the scene and Dotty practically turns to the camera to ask, “Still think it’s like a place in the sun?” Or more bluntly, someone reminds Vikar in the third act that, “Just because you love something, doesn’t mean it loves you back.” This was true of Franco’s career as an important director, poet, producer, and playwright, and the entire movie is as simplistic in its world view. Every few minutes it asks us anew “the movies sure are wild, aren’t they?” Yes. And? 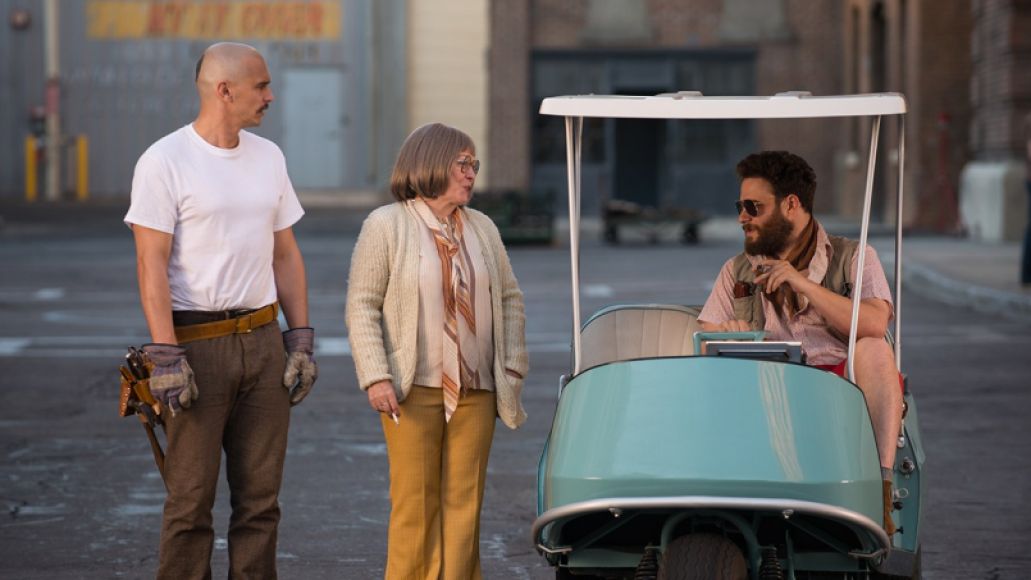 A Virgin Among The Living Dead: It’s usually harder to see Franco inserting himself into the narratives he chooses to adapt but Zeroville’s unusually frank about how he sees himself. He constantly smashes windows and punches guys to prove his affection for Soledad’s daughter Zazi (Joey King), as if being a father figure is the most important thing a man could hope to be, even as he failed to be a partner to Soledad when she was alive. The storyline where he fights Ferrell for her affection is a complete non-starter relying on the hoary cliche of a woman so cowed by the prospect of a rich man she won’t speak up for herself. However, the film excuses any and all platitudes by reminding us this is a cover version of A Place in the Sun, but that wears out its welcome about the 10th time we get a close-up of Franco’s tattooed head.

There’s also a dispiriting use of Craig Robinson as a petty crook that Vikar runs into on his way up and then again on his way down. The criminal’s life hasn’t changed at all while Vikar has experienced the entirety of New Hollywood’s birth and death as if he were its Christ-like representation. Vikar hands the burglar all the money in his wallet by choice and Robinson says, “For a freaky white boy, you ok!” Franco seeking approval from a black character while shepherding an underage girl around post-punk New York City is a pretty transparent look into his very shallow goals as an artist. 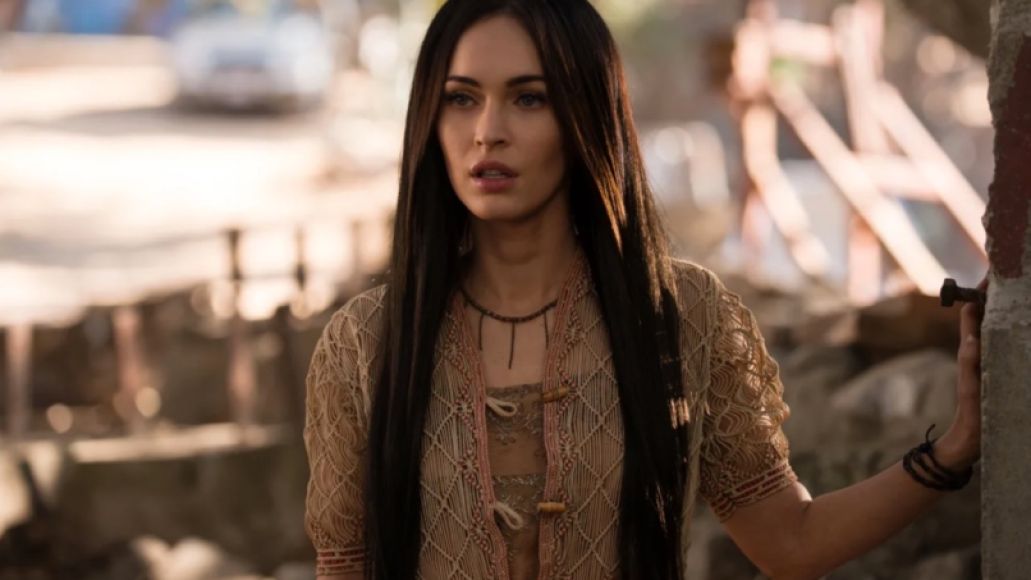 Hollywood Ending: The film isn’t — as crazy as this sounds — a total wash. There’s something in the idea of a missing actress only accessible through reels of film that has a bewitching poignancy. Megan Fox also does fine work as the film’s amalgamation of lost potential. She’s named for Soledad Miranda, the gorgeous Spanish actress who died too young and who was the muse of cult director Jesus Franco, whose collaboration Vampryos Lesbos gets a shout out in the film. Jesus Franco made over a hundred movies, some of them porn, all of them at least interesting as a window into the jazz-obsessed Spaniard’s warped brain, and into the dictates of the Eurosmut industry.

James Franco taking potshots at Jesus Franco is about as unearned a jab as you’ll find outside of the Razzie Awards, especially considering that the younger man made a horror film (The Institute) as purposely mystifying and dreamy as any by the Spanish auteur, if less arresting visually and editorially. Fox does a good job approximating the misty charisma of actresses back then, striking a balance between Miranda, Dolly Read and Oja Kodar that has been rendered completely obsolete by changing beauty standards and a collective disdain for history in new American art. People really did look and act like Fox does here. She’s convincing where a parade of young people pretending to be Steven Spielberg and George Lucas are not, never mind that Spielberg pitches Jaws at a party years before Peter Benchley wrote the novel on which it’s based. 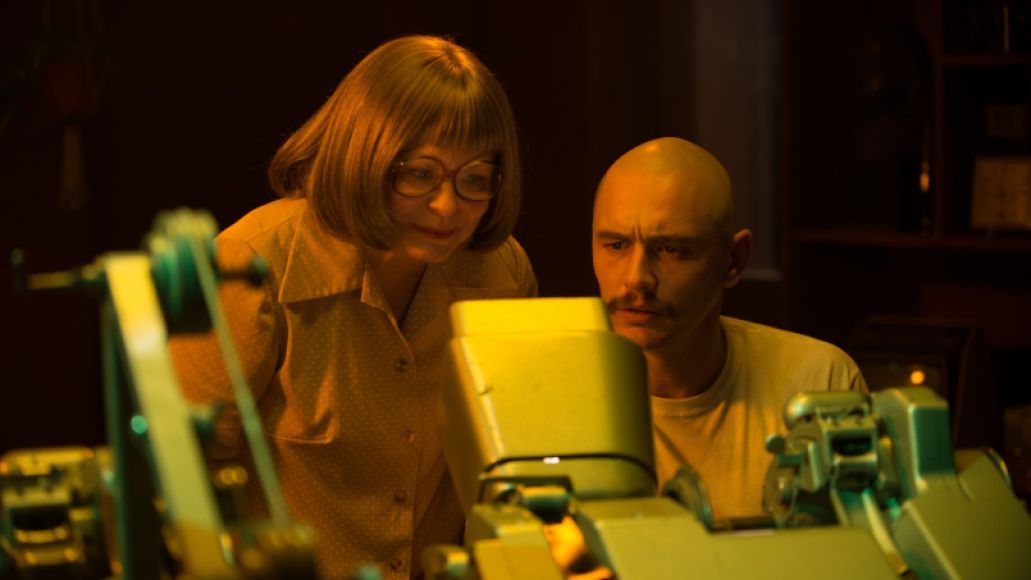 Franco wasn’t always this incautious a filmmaker, even if he’s never been the most discerning writer of adaptations. His trio of classics-for-dummies — Child of God, The Sound, and The Fury, and As I Lay Dying are formally adventurous and occasionally quite moving. The movies he made up to, and including Zeroville, don’t speak to a man who was out to keep taking those kinds of risks, and we may never know what else he had in him. Zeroville would be a pretty weak epitaph to a voluminous, if not necessarily distinguished, career if that’s what it turns out to be. It has the worst last line imaginable and then ends with a gag edit of Franco poorly spliced into the last scene of Easy Rider. The sight is so embarrassing you’ll forget anything you liked about the preceding 90 minutes. It would have been interesting to see what else Franco would have tried as a director, but there are several people who would have been interested in him keep his clothes on.

Film Review: Zeroville Is A Weird and Embarrassing Look for James Franco