Green Day have announced a new album called Father of All Motherfuckers. Due out February 7th, 2020 via Reprise/Warner Records, it marks the punk rockers’ 13th studio album to date and follows 2016’s Revolution Radio. The album’s announcement coincides with news of the band’s massive “Hella Mega Tour” with Fall Out Boy and Weezer.

Speaking to Zane Lowe on Beats 1, Green Day’s Billie Joe Armstrong revealed Father of All… spans just 10 songs. “It’s only 26 minutes long, so it’s the shortest record we’ve made, I think, since Dookie or Insomnia,” he noted.

Armstrong went on to talk about how the lyrical content picks up in a post-American Idiot world:

“There’s a lot of depression, but with a sense of humor. But also just kind of the way the world works right now where everything is… We live in just the time of complete and total chaos – or else we’ve always been, but now it’s turned up with Trump. So it’s just trying to reflect what’s going on. And it’s not really writing political songs, but just writing stuff that, just the shit that you see every day. [American Idiot was the] good old days. Remember when we just had two wars going on?”

As a first listen, Green Day have shared the Father of All… title track. It’s a bopping, poppy cut with clapping hooks and Armstrong reaching up into his falsetto. Take a listen below. Update – October 9th: A second taste of the LP in the form of “Fire, Ready, Aim”, which also serves as the theme to the NHL’s Wednesday Night Hockey on NBC, has also arrived.

In addition to the new LP and “Hella Mega Tour”, Green Day have also scheduled headlining shows in Asia, Russia, and Europe. See the band’s full tour docket below, and get tickets to all of Green Day’s upcoming shows here.

Father of All Motherfuckers Artwork: 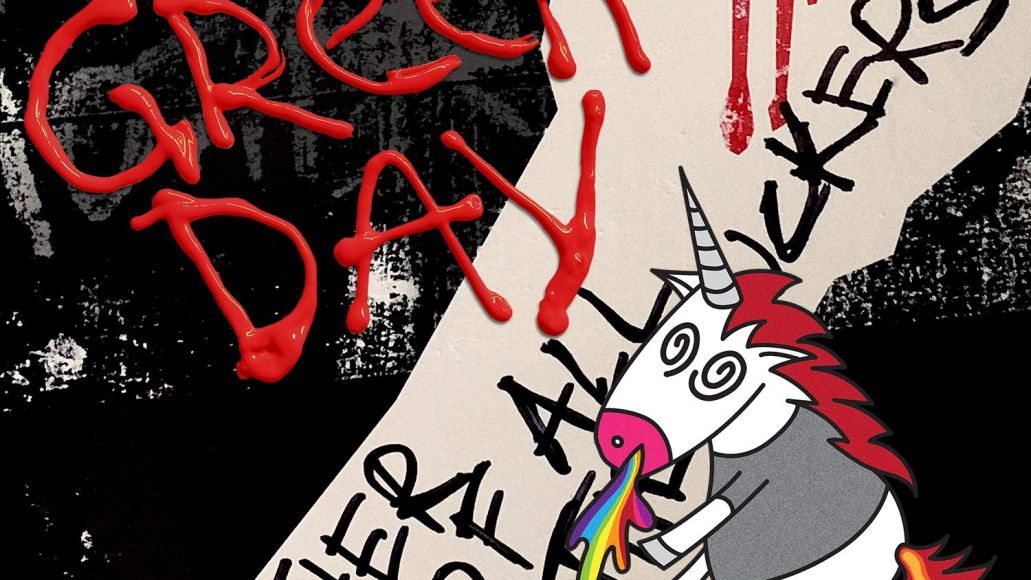