Germany’s massive twin festivals Rock am Ring and Rock im Park have revealed their initial joint 2020 lineup, led by headliners System of a Down, Green Day, and Volbeat. Also on board for the June events are Deftones, Weezer, Korn, Disturbed, Billy Talent, The Offspring, and more.

While there is still no encouraging news from System of a Down regarding a new album, the band just stated that it will play “many shows in Europe next year.” In addition to the Rock am Ring and Rock im Park dates, System will headline the Provinssi Festival in Finland in late June, with more dates yet to be revealed.

Green Day, meanwhile, recently announced that they will headline a massive North American stadium tour with Fall Out Boy and Weezer next summer. Their 2020 dates will come in support of their upcoming album, Father of All Motherf**kers, due out February 7th.

Volbeat released their latest album, Rewind, Replay, Rebound, last month, and their headlining status over such bands as Deftones, Disturbed, and Korn shows just how big the Danish rockers are in their native Europe.

(Read: System of a Down Bassist Wishes Band Had Released 10 Albums by Now)

In addition to the aforementioned acts, Rock am Ring and Rock im Park will also feature Broilers, Heaven Shall Burn, Power Wolf, Of Mice & Men, Motionless In White, August Burns Red, Trailerpark, Bilderbuch, Wanda, Alan Walker, Trettmann, Yungblud, and Bosse. The initial lineup can be seen in the poster below, with more acts to be announced.

More information can be found at the Rock am Ring and Rock im Park websites. 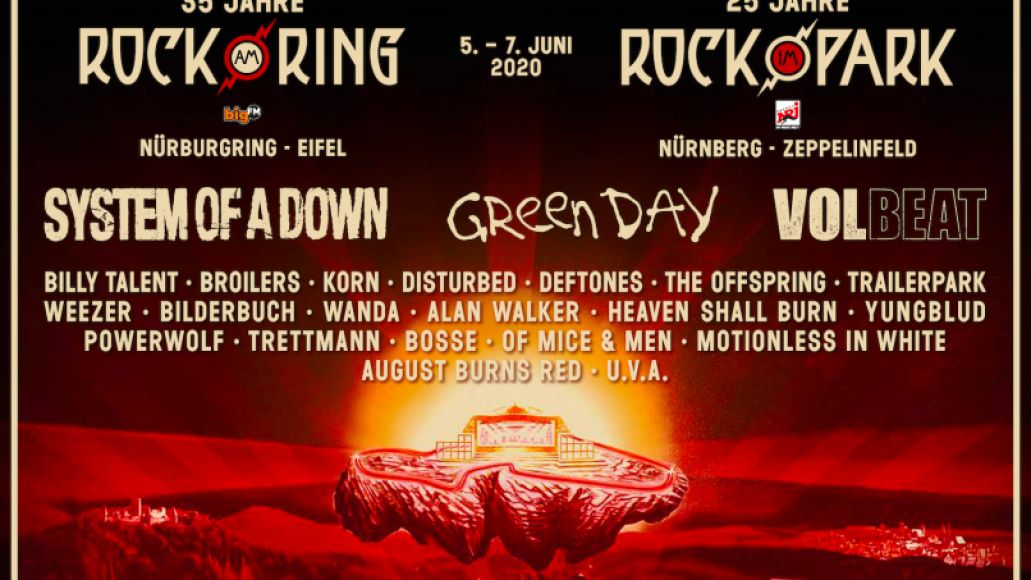 Rock am Ring and Rock im Park 2020 lineups: System of a Down, Green Day, Volbeat, Deftones, Korn, and more