The Pitch: In 1982, horror maestros George A. Romero and Stephen King joined forces to celebrate the spine-tingling EC Comics that gave them the stone-cold willies in their ’50s childhoods. The result was Creepshow, a delightfully arch anthology of spooky stories filled with ghosts, ghouls and (as King’s cameo puts it) “meteor shit!” that remains a cult favorite to this day. Now, horror streaming service Shudder, whose creepy capital has skyrocketed in the last year, is reviving the concept with 12 spooky tales meant to capture the bone-crunching legacy of the age-old horror comics. 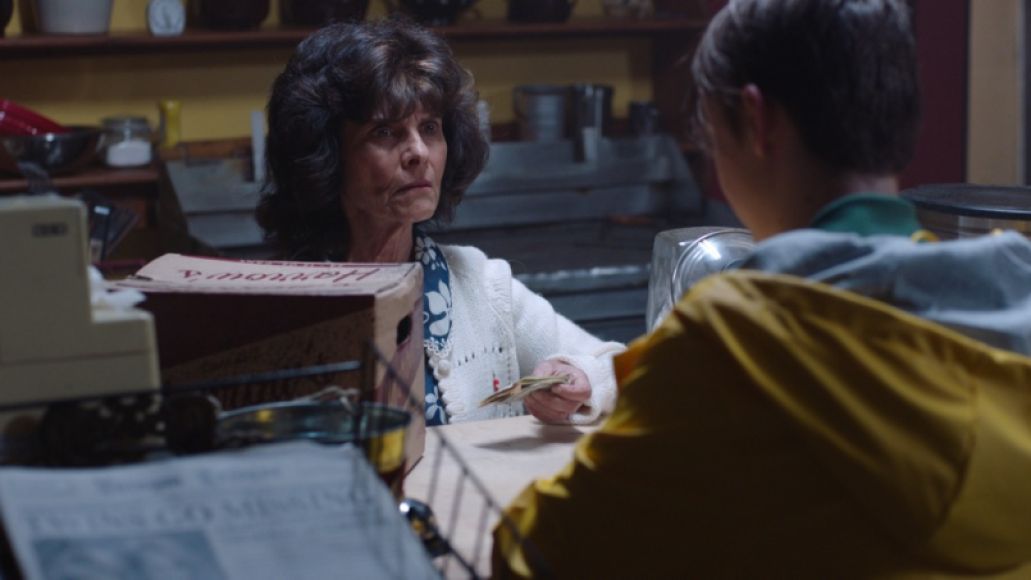 Gray Matter: Of the six episodes comprising Creepshow‘s first season, only the first was made available to critics leading up to the premiere. That said, it’s a solid introduction to the concept, a gruesome twosome of chillers that use their low-budget, homespun chintziness to great effect. The first is “Gray Matter”, based on the Stephen King short story of the same name from Night Shift, about a sleepy Maine town (they never say that explicitly, but come on, it’s Stephen King) beset by a hurricane, leaving only a select few to occupy the town.

Like a lot of King stories, it’s a slow burn: young Timmy Grenadine (Christopher Nathan) weathers the storm to pick up some of his favorite beer for his shut-in father (Jesse C. Boyd). But as Timmy tells store manager Dixie (horror icon and original Creepshow veteran Adrienne Barbeau) — and the town’s police chief (Tobin Bell) and doctor (Giancarlo Esposito) see for themselves — Papa Grenadine ain’t what he used to be. 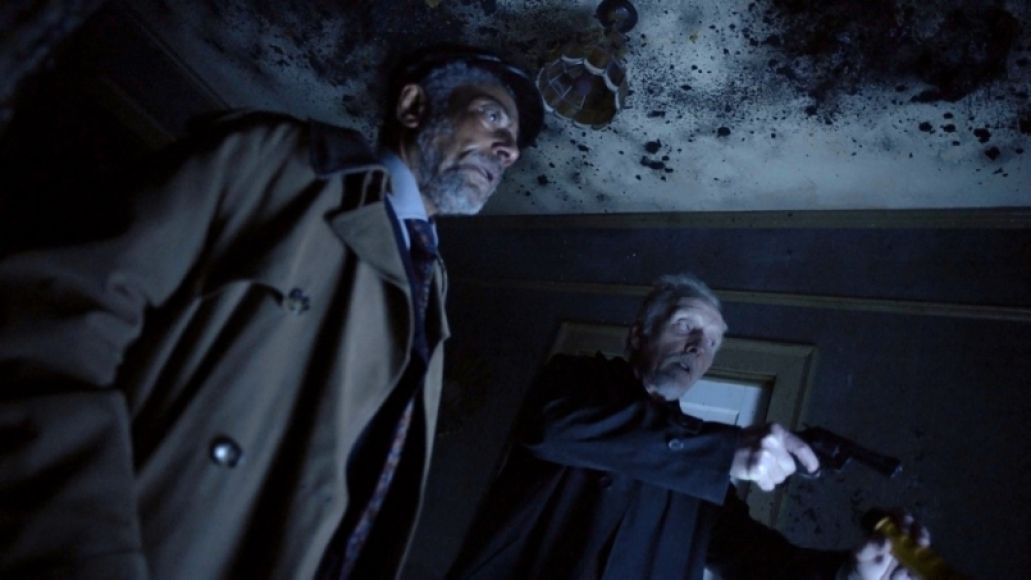 Directed by Creepshow showrunner and effects guru/genre titan Greg Nicotero, “Gray Matter” is the Platonic ideal of a Creepshow story, and a really solid note on which to kick off the series. In classic King fashion, the story deftly weaves a simple setting of a rain-soaked coastal town with darker, more eldritch horrors that simultaneously dovetail into far more human foibles. Sure, there’s a big gloopy monster and Esposito shrieking in terror like the best scream queens, but it starts as a mournful tale of a man who drowns his grief in alcohol. Stuffing the cast with stalwart vets like Bell, Esposito, and Barbeau certainly doesn’t hurt, either. By the closing minutes of this one, you’ll be suitably spooked. 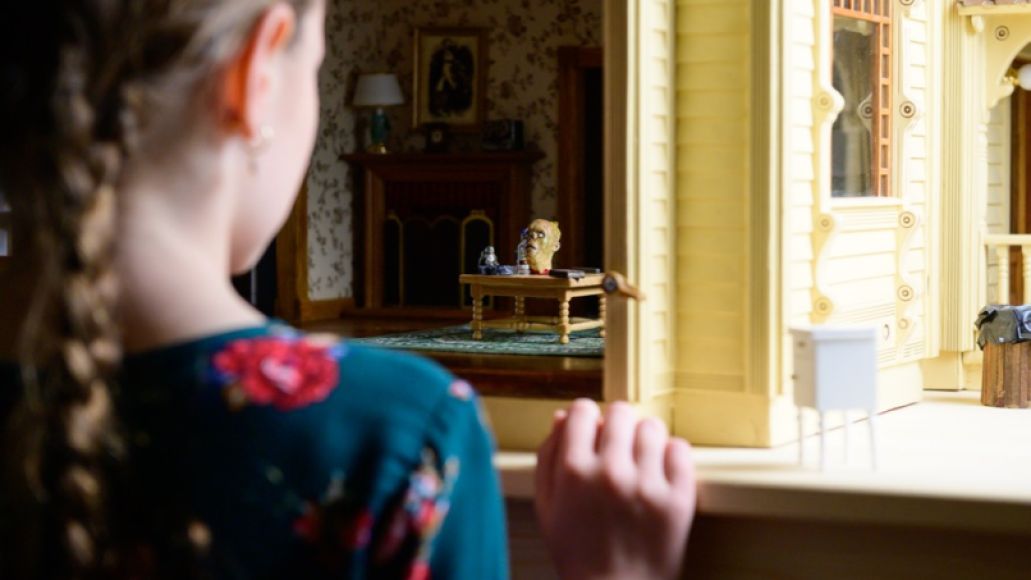 House of the Head: The second half, “House of the Head,” is a bit less effective, though its concept is certainly novel. Penned by Bird Box‘s Josh Malerman and directed by Creepshow AD and frequent Romero collaborator John Harrison, this one follows young Evie (Cailey Fleming), whose giant, elaborate dollhouse is suddenly visited by a decaying, severed head. As Evie watches, seemingly helplessly, the head slowly creeps toward the family of dolls — analogous to her own family — despite all efforts to save them.

Admittedly, this one’s a bit of a comedown from the killer opener that precedes it. While Fleming’s a charming actress, she can’t quite sell the sense of danger and dread you need to establish the stakes (her cries of “no” sound more inconvenienced than terrified). It’s never quite clear why Evie doesn’t tell her parents what’s going on — or hell, just pulls the doll head out of the house and throws it away. There are some whispers of metaphor about what the dollhouse represents, as the maker of the dollhouse implies that kids play with dolls because “there’s no better way to figure out who they are,” but they get dropped pretty fast. 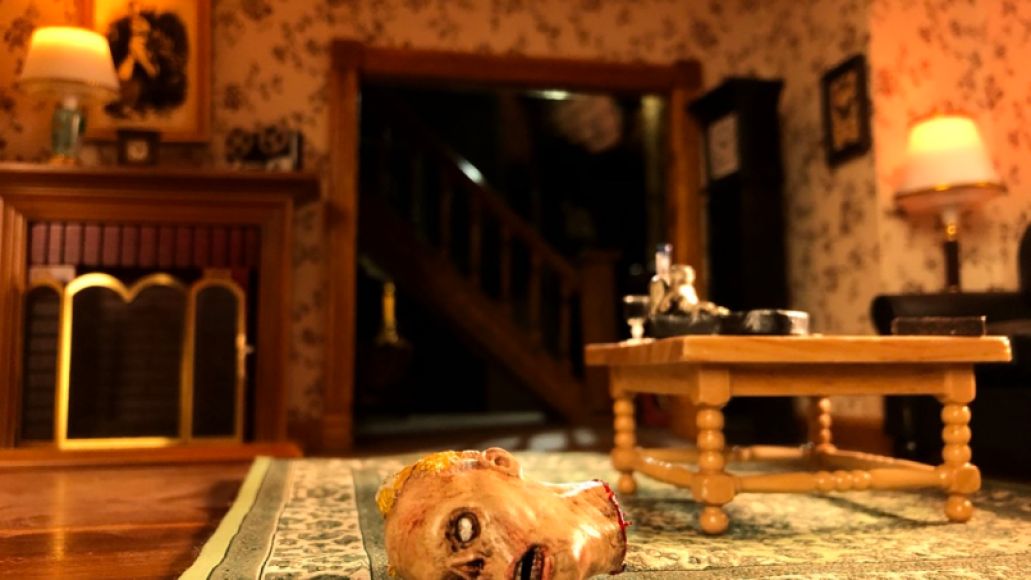 As is, “House” works best as a playground for Harrison to play with some spooky camera angles, framing Evie’s face in interesting ways as she looms through the dollhouse windows. It’s a neat play on horror geography (one more than a little reminiscent of the haunting miniatures in Hereditary), but it all leads up to a rather rushed anticlimax.

Blood and Panels: At all turns, Creepshow does its damndest to remind you of the ’82 film that inspired it (and, in turn, the EC Comics that spawned that). Comic book transitions abound, scenes bookending with the flip of the page or the switch of a panel. Brief interludes pan over quaint ’50s-style toy adverts as we, the reader/viewer, flip past the ads to get to the good stuff.

Occasionally, the world of the comic invades the universe of the segments themselves (we get a nifty *PSHHT* caption every time Papa Grenadine cracks open another can of Harrow’s), or a time shift is greeted with “Later that night…” Plus, there’s all the fisheye lens and Dutch angle goodness you could possibly ask for, Nicotero and crew winking demonstrably at Romero’s arch, Expressionistic visual style. 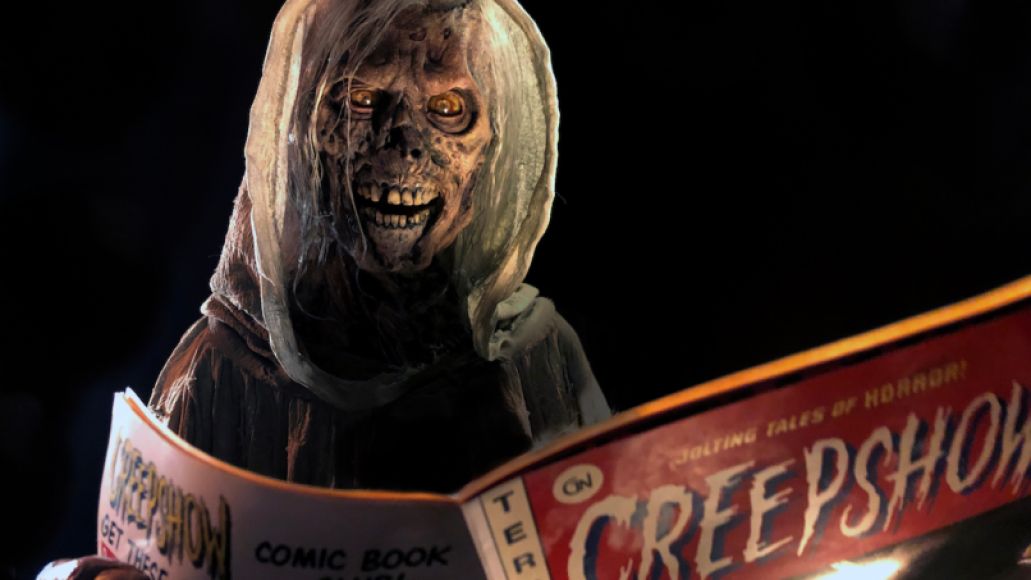 The Verdict: From the first episode alone, Creepshow looks to be sheer catnip for ’80s horror obsessives, hearkening back to a simpler time when horror didn’t have to be filtered through the baroque trappings of arthouse cinema to be respected. The show’s clearly made on a modest budget: houses and general stores look like 20-square-foot sets, and the whole thing’s lit and shot like a commercial for your local suburb’s annual haunted house attraction. Like any anthology, Creepshow is sure to be hit or miss; by the looks of the first episode, some shorts will chill the bones more than others.

But that’s the charm of Creepshow, really. It’s cheap and more than a little goofy, but that just adds to the sense of nostalgia and tradition these segments are playing into. It’s stewarded by a mass murderer’s row of horror greats (future installments will see work from Tom Savini, Paul Dini, Joe R. Lansdale, and more), and all eyes are set on keeping a certain kind of old-fashioned horror alive. As Editor-in-Chief Michael Roffman learned when he visited the set of Creepshow back in March, it’s all about respect for the genre masters like Romero, Wes Craven, Tobe Hooper: whatever they can do to conjure their terrifying spirits, they’ll do it.

In an age where phrases like “elevated horror” are dividing and muddying genre definitions like never before, it’s stuff like Creepshow that can easily, unequivocally earn the label. And we can’t wait to see how the rest of the season will make us shake in our boots.

Where’s It Playing? Creepshow rips off your skull and uses it as a beer mug on Shudder starting September 26th.