The Re-Pitch: It surprises nobody when writer-director-mime Kevin Smith goes back to the well. The indie filmmaker turned Q&A storyteller turned pothead father turned prolific podcaster turned television host turned svelte vegan (not necessarily in that order) has always found a certain comfort in returning to the convenience stores and characters from whence his improbable career exploded. It also doesn’t hurt that Smith has a large and loyal cult fanbase who have grown up with his View Askewniverse and will keep shelling out duckets to burn off brain cells while watching Jay and Silent Bob long after apes conquer the planet, terrorists burn down the Quick Stop, and Willam sees that schooner again.

That said, your favorite bumbling burnouts are back: Ted Underhill and Mr. Taint! Oh, fuck beans. I mean, Jay (Jason Mewes) and Silent Bob (Smith). It’s nearly two decades since Jersey’s finest got tangled up with an international gang of jewel thieves while traveling across the country to prevent a Bluntman and Chronic movie from being made and stop pretentious assholes from talking shit online about their fictional selves. (Time hasn’t tightened that plot up any, has it?). Anyway, make the movie to be sabotaged a reboot of Bluntman and Chronic, substitute in some “youth and diversity” (e.g. Harley Quinn Smith as Millennium “Millie” Falcon, Jay’s love child with Justice), and you pretty much have Strike Back minus the monkey. Of course, that’s the joke … and one that Smith hopes will be rich enough to carry the flick. 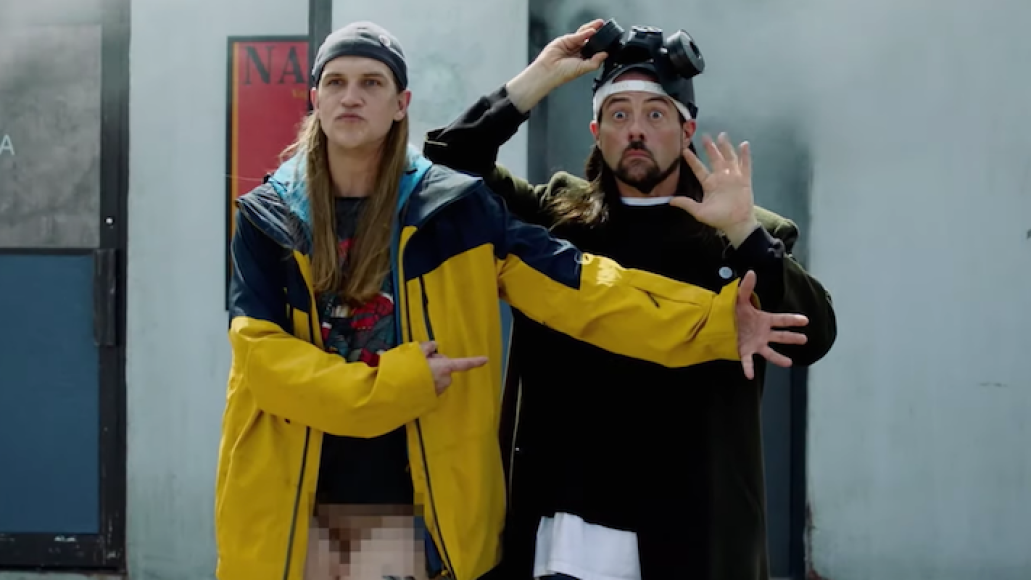 Oh, What a Lovely Tea Party: Damn, this mutherfucka has more cameos than a fucking Muppet movie. Like Strike Back, Reboot shows zero restraint in calling in favors from old friends, family members, actors from prior Smith flicks, card-carrying members of the Askewniverse, and even former Batmen (they hugged it out, bitch!) to help create a world silly, salacious, and scatological enough for a Jay and Silent Bob adventure. Again, it’s not surprising for fans. Smith has always joked that he thought the point of a making a movie was to cram as many friends and family members in it as possible. Mission accomplished … again.

And, yes, it’s a treat to see Dante (Brian O’Halloran) still struggling to get gum out of the Quick Stop locks, a panel of the Clerks cast taking questions in all black and white, Matt Damon returning as Loki to take punny shots at Tom Hiddleston, Holden McNeil (Ben Affleck) chiming in on Batfleck, and Alyssa Jones (Joey Lauren Adams) explaining why no white cisgender male should direct Chasing Amy. Most of these jokes land, and it shows that not only does Smith have a lasting affection for the world he once created to tell his stories in, but also that he understands how his world both holds up and shows its age when considered alongside modern pop culture. 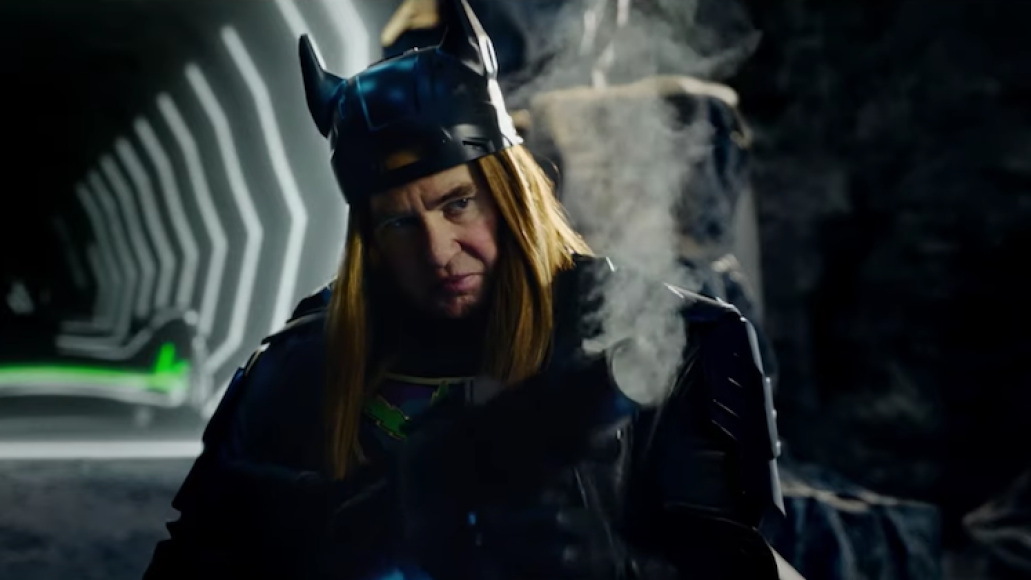 Barely a Movie (But So Was Clerks): Yes, Kevin Smith, more than ever, knew the movie he was making and for whom. Like in Strike Back, Jay and Silent Bob cartoonishly wink and nod and break the fourth wall (and even pull off a Duck Soup mirror homage) all the way to Hollywood. Neither Strike Back nor Reboot could survive its runtime without this painfully obvious level of self-awareness, but that still doesn’t excuse either movie, particularly Reboot, from stretching itself rather thin and winking about a dozen too many times.

The reboot premise itself, while a clever joke, only goes so far, and much of the first half of the flick drags between gags on a road trip that, frankly, we want little part of. When Jay (in fine soccer mom style) finally delivers his daughter and her friends to Hollywood, things go so haywire (and feel so arbitrary) that you’ll yearn for the quaint, simplistic days of driving home a final act with a donkey show … I mean, interspecies erotica. It’s just a mess — albeit a fun one at times.

Smith does spin in a few father-daughter reflections that land surprisingly well, and “Iron Bob” (suck a cock, Tony Stark) may be Roberto Silencio’s most inspired comic book joke ever. Still, in a “reboot” of a movie in which Smith both celebrated and lampooned the idea that Hollywood would lower the bar enough to actually produce a Jay and Silent Bob full-length film, it’s underwhelming to find that Smith couldn’t apply a little sturdier glue to hold this shaky collection of dick and dad jokes together. 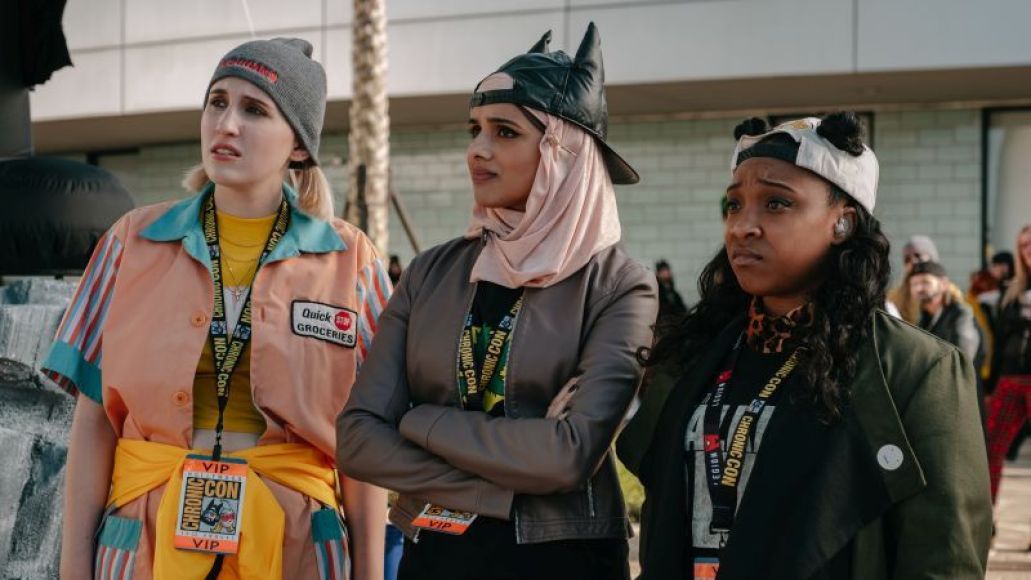 End of the View Askewniverse?: Not quite. Clerks III has been announced, and Smith has recently spoken in detail about the catalyst that brings us back to Dante and Randall’s corner of the Askewniverse for presumably the final time. Like Smith’s best Jersey fare, Clerks III will likely have something personal to say. Jokes in Reboot from both Dogma and Chasing Amy characters also suggest that Smith has tied up loose ends there as well. As for Jay and Silent Bob, it’s difficult to imagine them even trying, let alone succeeding, to carry another film on their shoulders. The old jokes get old, the emojis feel a tad desperate, and the boys now have a new generation to pass the torch, er, blunt, to.

No, this film feels very much like a thank you to fans and a farewell from Jay and Bob — at least as leading men. While Kevin Smith may joke about returning to the well, it’s more likely that he’ll take a page from Kurt Vonnegut’s Breakfast of Champions and let his characters go free — or at least hitchhike down a lonesome road with Hulk music playing. 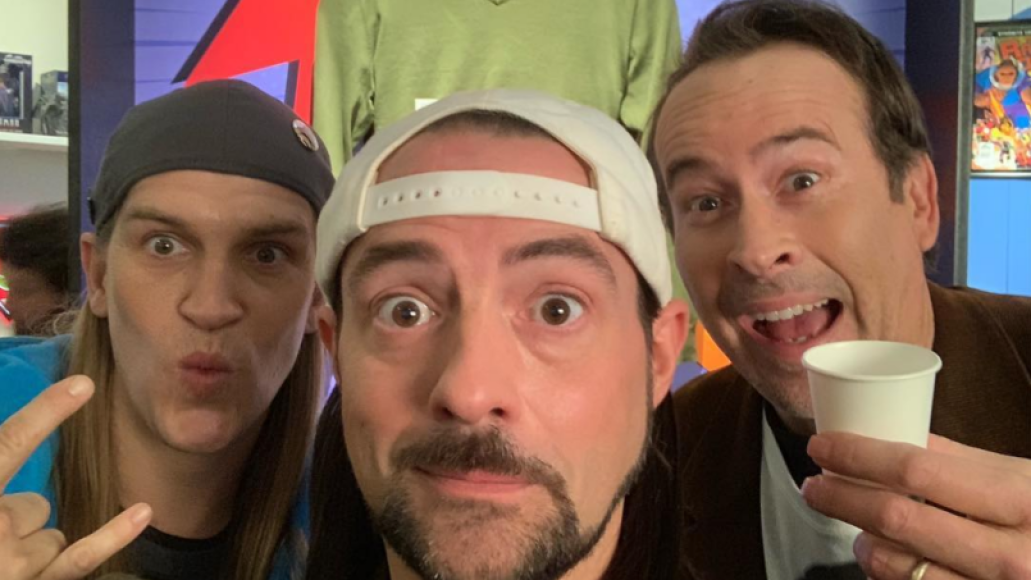 The Verdict: Jay and Silent Bob Reboot ends on arguably the funniest line of the movie. Jay quietly admits to Millie, as an exasperated Dante Hicks curses and calls for the cops, that he and Silent Bob have been plugging the Quick Stop’s locks with gum each morning for 25 years now. It’s a confession that brings Jay and Bob back to when they were just two stoners dealing outside a mini mart and a video store — to a time they can’t get back to but also never have to entirely leave behind, especially as those stories get passed down to Millie.

As I left the theater last night and listened to pairs and small groups of thirty and fortysomethings chuckle and recall favorite moments in the lobby and parking lot, I heard one graying friend tell another: “I’m glad you called me to go. That was like an old-school hangout.” While Kevin Smith may never appear on a list of great filmmakers, his movies do understand something essential about getting older and growing up.

Sometimes, we all just need to go back to the well.

Where Can I See It?: In select theaters on October 17th as a double feature with Jay and Silent Bob Strike Back and at any of the 60 or so road show screenings that Smith will be hosting across the country in the weeks to come.