This review originally ran in March as part of our SXSW 2019 coverage.

The Pitch: Think back to everything you love about Edgar Wright’s Shaun of the Dead. Now, take that style of whiplash comedy and pair it with the living room heart of Ivan Reitman’s Kindergarten Cop. In a sense, that’s Little Monsters, a movie that tosses a bunch of Australian kindergarten kids into a literal petting zoo that’s consumed by the walking dead. The only one to save ’em? An aging rocker in the midst of an existential crisis (Alexander England) and a resourceful teacher who has one hell of a clean up job on her hands (Lupita Nyong’o).

There’s a New Scream Queen at the Throne: The consensus at this year’s South by Southwest is that Nyong’o is quickly becoming the new Scream Queen to behold. That may be asking a bunch of the Oscar winner, but if she’s game, the path is hers to lose. Between her breakneck performance in Jordan Peele’s Us and this little gem, Nyong’o is wearing a lot of blood this year, but it’s a damn good look on her. She’s calm, calculated, and incredibly relatable, not too dissimilar to Jamie Lee Curtis way, way back in the ’70s.

With Little Monsters, Nyong’o not only jumps to the task at hand, but learns her strengths with every passing shovel and pitchfork. There’s a naturalism to her performance that suggests she can bring some much-needed realism to the quote-unquote Scream Queen model. It’s in the way she lets loose on England, confessing that she’s scared shitless despite putting up the strongest front between the two of them. But she also doesn’t have all the answers, earning her stripes as the zombies close in and her catalogue of ukulele covers runs out. 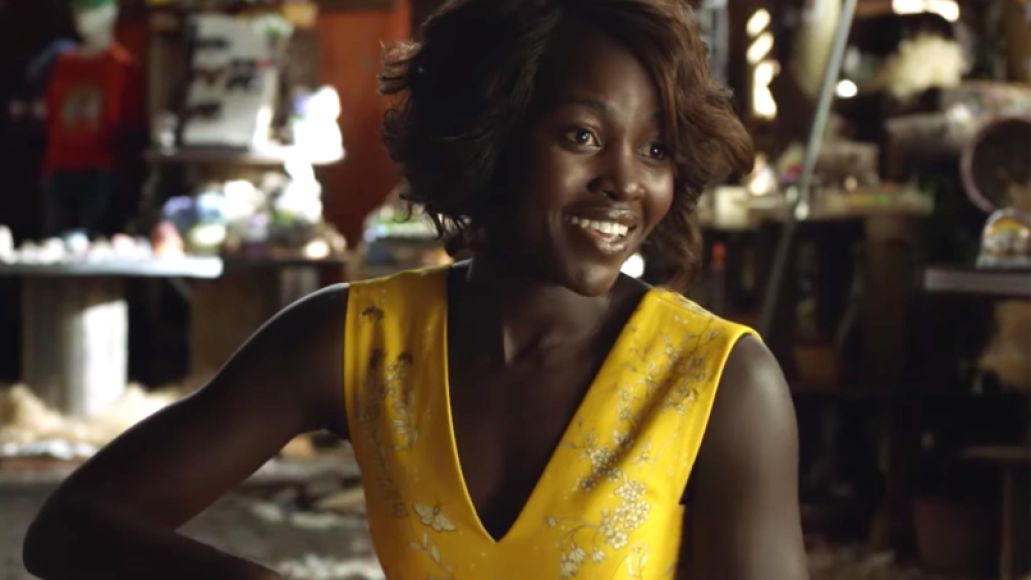 At a time when there’s never been more demand for women at the forefront, Nyong’o is a timely and surprising revelation. This flick may be a far cry from her prestigious work of yesteryear, but she’s hip to writer and director Abe Forsythe’s pacing. Even better, she’s also keyed into the realities of being an actual kindergarten teacher — following the SXSW premiere, she explained how she studied the Australian education system prior to filming — and her sense of immediacy is in every one of her actions. You believe her fear for the kids — and her love.

But her performance goes beyond just the blood and guts. Nyong’o is downright charming, to the point that you wonder how many more genres she can tackle in the years to come. Her comedic timing is on-point and her knack for action is sublime. Seeing her drop everything and race out to find an EpiPen for one of her kids, or slamming a piece of zoo merch into Josh Gad‘s belly for being a misogynistic prick, is the type of character-building work that explains why so many con kids wear shirts or buttons with Kurt Russell on ’em.

Rest assured, Nyong’o will be on those in the months to come. 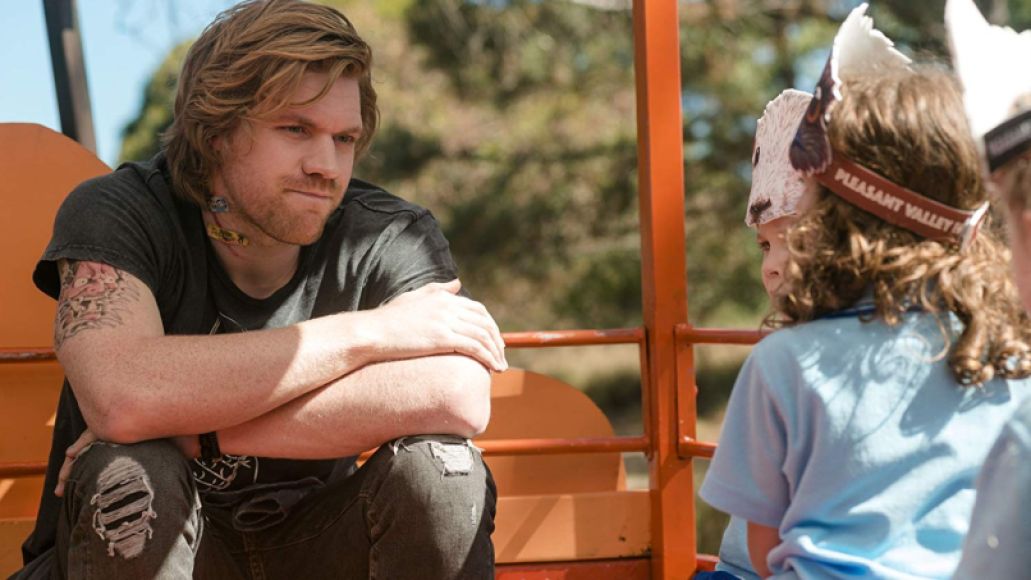 Resurrection or Final Rites? That odor you smell is the decaying corpse of the zombie genre. For the last decade, George A. Romero’s once-underrated subculture of horror has been torn apart in more ways than the asshole cast of Day of the Dead. Forsythe is clearly aware of this, which is why the film doesn’t really concern itself with the walkers. Instead, he uses the medium for what it was always intended for and pries out an original story. This is a cutesy family comedy that wears its heart on its sleeve as opposed to the mouths of its ghouls.

Like Shaun, the film sets that tone from the get-go, kicking things into high gear with a schmaltzy, chummy score that suggests you’re not here to cower, you’re hear to laugh. But what’s surprising is how much you’re also here to sigh and choke up. You see, England’s hilarious rocker uncle also has a nephew (Diesel La Torraca), and their bond leads to a series of sentimental moments, all of which Forsythe earns, namely because he drew on his own experiences. This is a script that could only come from a young father, and it’s in every line of dialogue.

Yet this all wouldn’t work if the kids weren’t so goddamn hilarious, too. Like Cop, Forsythe doesn’t just give you a faceless class of kids, which would have certainly been the easier route for him, he drops a yearbook of memorable brats. Surrounding England and Torraca are a gaggle of kids, who all have their share of quirks and eccentricities, which warrants as many recurring jokes as poignant moments. By the end, the payoff is extraordinary, no different than when you reach the finale of any epic zombie movie, and you’ll be championing each and every one of ’em. 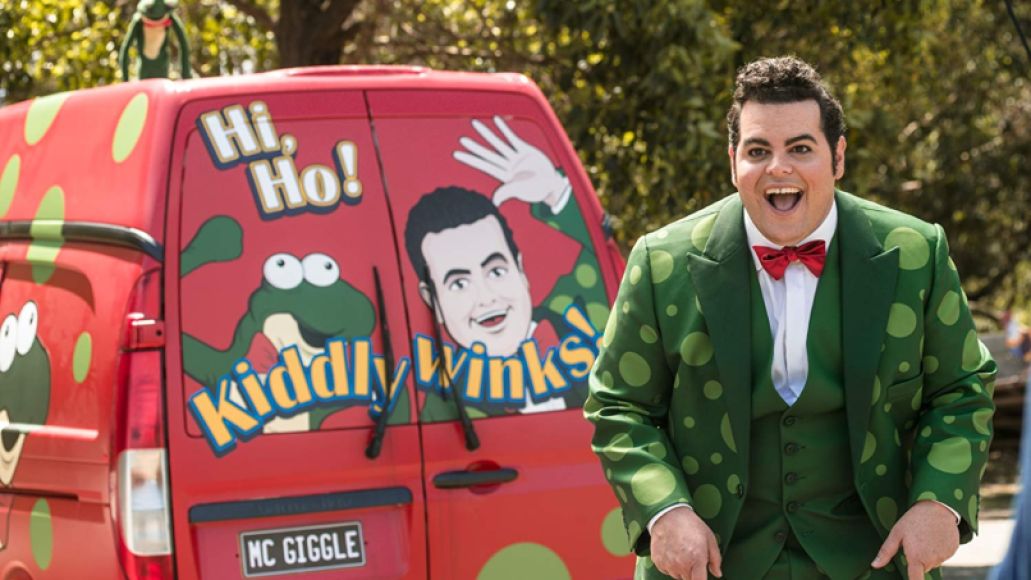 Finally, Josh Gad Shit His Pants! As incorrigible children’s TV host Teddy McGiggle, Disney’s go-to actor gets to finally let loose in ways that would nuke the Mouse House. He’s a sex addict. He’s a drunk. He’s a terrifying piece of human excrement. But he’s also hilarious, and while Forsythe could have dialed down the expletives for more maximum effect (it begins to sound a tad too high school), Gad gives it 110%. His bitter rivalry with his fellow puppet co-star Frogzy alone is worth a watch in itself. Besides, what zombie movie has a Gigglemobile? C’mon.

Can We Get That “Shake It Off” Cover? Make it happen, Nyong’o.

The Verdict: Little Monsters oozes with heart and soul, making for an ultra likable, last-minute addition to a genre that should be buried 12-feet under in the near future. As director and writer, Forsythe delivers the goods in all the right areas, finding a way to navigate the crowded medium with a hilarious and quick-witted screenplay that he executes with stylish aplomb. It also helps that everyone’s on the same page — you know, like a good group of kindergarteners — and that extra oomph gives Little Monsters the golden star it so wants to take home to show its parents.

Where’s It Playing? Little Monsters crawls on to Hulu this Friday, October 11th.