The Pitch: Lucy Cola (Natalie Portman) has been to space. That’s putting it too plainly, in fact—she has floated in the great emptiness of the galaxy, a vastness that contains nothing and everything, that makes clear both the smallness and the wonder of existence. Then she goes back to Earth: to breakfast with her husband (Dan Stevens), a chipper publicity representative for NASA; to caring for her ailing grandmother (Ellen Burstyn) and lonely niece (Pearl Amanda Dickson); and above all else, to training, so she can get back up there, get back to space, get back to the infinite. On Earth, though, her personal gravity has shifted, and as Lucy’s connection with her life—and with a rogueish fellow astronaut (Jon Hamm)—begins to fray, so does her grip on reality.

It’s based on this story. Inexplicably, they cut the diapers.

The Girl With Kaleidoscope Eyes: Lucy in the Sky is a vapid, silly, and occasionally insulting movie that — with one exception and one exception only — wastes its excellent cast. (Zazie Beetz, Nick Offerman, and Hamm have more to do in any one episode of the television shows for which they are best known for than they have in all 124 minutes of this thing). But the exception is a big one, and at times, she comes close to making Lucy worth watching. Portman’s considerable talents may not be as well-used here as they were in Annihilation, Jackie, or other recent triumphs, but they are nonetheless considerable, imbuing Lucy with a level of complexity the rest of the film can’t even be bothered to pursue. 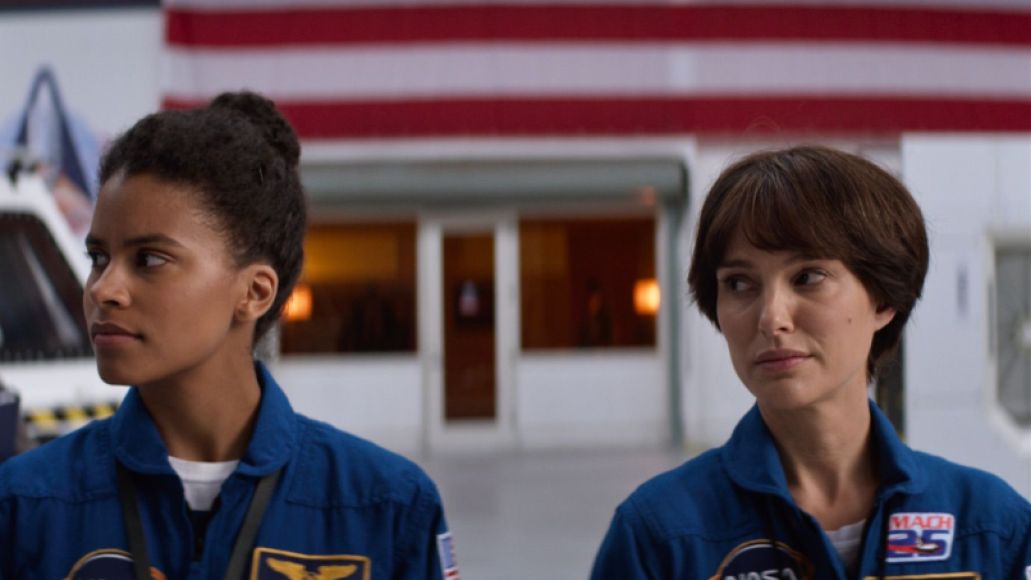 Portman looks, at every moment, like a visitor on Earth, not a resident, someone whose mind and heart have been so thoroughly changed that she no longer belongs inside the life that was hers. It’s a performance that marries delicate vulnerability with a focus as sharp as a bite from a lemon, and even when the film writes Lucy off as crazy, Portman treats her with dignity. This is a person, even when she’s wearing a hardware-store wig. (In this world, hardware stores sell wigs next to the hammers and duct tape.)

But not even she can topple the single biggest problem, and it’s one that’s illustrated by that oh-so-clever combo of the film’s title and its protagonist’s name. Whether the name of the character or the film came first matters not, what matters is that at some point in the writing process—the screenplay is credited to Brian C. Brown, Elliott DiGuiseppi, and director Noah Hawley, the story to Brown and DiGuiseppi—someone said, “Oh hey, Lucy was in the sky because she’s an astronaut, and also that song is kind of trippy, nailed it!”, and then someone else high-fived that person and they called it a day. That was a wrap on Lucy, the character. Lucy in the Sky is far more interested in Lucy as an idea, as a title, and eventually as a crazy lady than it is in her interiority. Any life she possesses comes from Portman, presumably through sheer force of will. 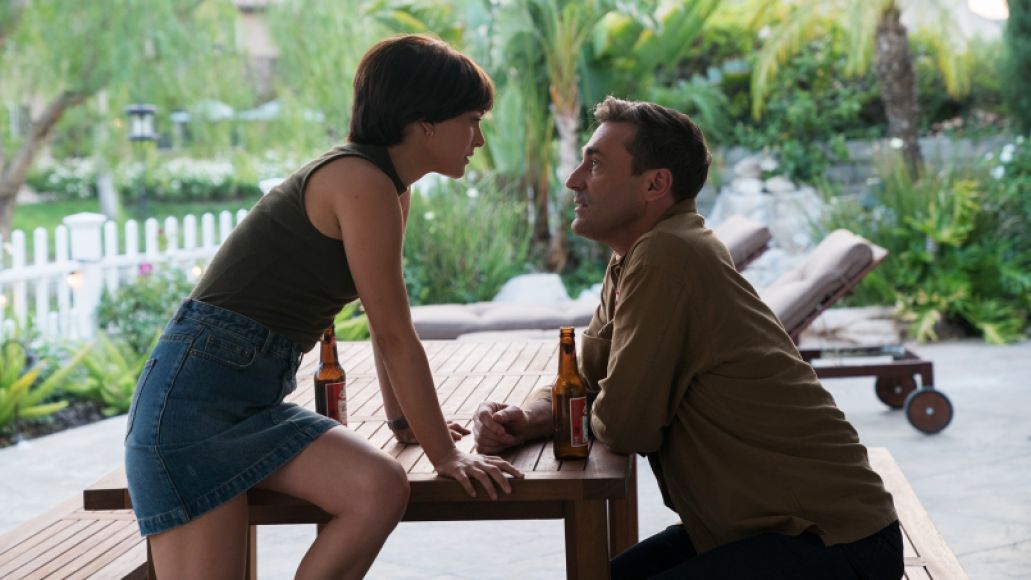 A Thing That Happened: This is a film in which Hamm’s character sits in his living room, drinking and watching the Challenger blow up, over and over again. It is ridiculous, but because Hamm is a good actor, it opens up a tiny door into the character, letting just a little light in, so that we have a sense of what he hides from the world. Just for a moment. Suddenly, a person sits there, because for that few minutes, the film gives Hamm room to do what Hamm does, in a scene that leaves room for ambiguity and empathy. Portman’s gifts are just as, if not more, powerful, but she doesn’t get many scenes like that. Why bother? She’s Lucy.

Hey, At Least It Looks Great: Cinematographer Polly Morgan captures Lucy’s time in space rapturously; it’s hardly Morgan’s fault that Lucy inexplicably wears expertly-applied mascara inside her space suit. The gleam in her eyes matters far more, and that’s what Morgan’s camera loves most. She and editor Regis Kimble also do what they can to make her inner disorientation something the audience can experience, to mostly good effect. (One effective example: Lucy furiously jogs around a track, but then suddenly, the lines disappear and are replaced by the cosmos; you can hardly blame her for stumbling.) Even the truly earthbound moments are elegant and intimate. But when Portman’s off-screen (and even sometimes when she is, particularly when the title track finally kicks in), it’s all superficial, as if the film is preening for the viewer. 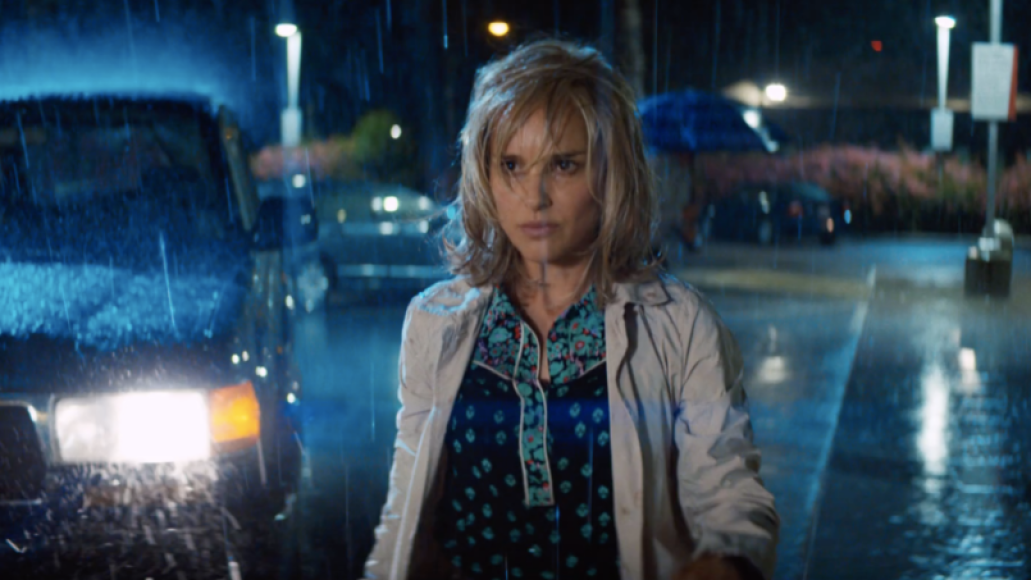 The Verdict: It’s that emptiness and self-importance that doom Lucy, because it means that when things get truly weird, there’s no reason for the audience to buy in. The film has spent so much time telegraphing its own depth that it forgets to create any, and thus when that wig arrives, we have no reason to view it as anything other than ridiculous. The film certainly thinks it’s ridiculous. It doesn’t care about Lucy’s mental state, beyond “crazy.” It doesn’t care about her goals, beyond “get him” or possibly “get her,” it’s unclear. It doesn’t care about her reasons, beyond what it seems to think passes for feminism. It certainly doesn’t care about that wig. It hangs on a hook in some impossible shop, which sells everything she wants in the same two aisles. Only the one wig. Not in a bag or wrapped in plastic, not placed alongside lazy Halloween costumes. She doesn’t pin her hair or even pull it back. It’s a miracle wig. If only it seemed that this signaled some kind of alternate reality, some skewed vision of the world we see through Lucy’s eyes. Alas, there’s absolutely no reason to assume that’s the case. Instead, it’s just another moment of laziness, another tell that indicates that Hawley was more interested in being the guy who made this movie than in actually making it.

Where’s It Playing? Lucy is floating in theaters right now.