The Pitch: Peevish cult comedian Tim Heidecker throws his hat into politics with the mumbly mockumentary Mister America. Tim, of Tim & Eric, is running for district attorney in San Bernardino. He’s market-tested his beard. He’s traveling around in a beat-up Ford Explorer with tons of swag in the trunk. “WE HAVE A RAT PROBLEM!” the signs and slogans declare, problematically dropped in local donut shops. Here’s a modernist huckster comedy about a totally inexperienced TV personality trying his hand at high-level negotiation, for spite, pride, and publicity. (Yes, please, read into that and the era of sloganeering tele-politics.) Heidecker’s a flop running on Mike Huckabee-like smarm, but with even more screaming and even less momentum.

Mister America is born from Heidecker and Gregg Turkington’s On Cinema at the Cinema YouTube series. In a recent B-plot, Heidecker pitched a Bonnaroo-ish EDM festival, only to kill a lot of people and injure plenty more due to managerial neglect. On YouTube, Heidecker was tried as a spin-off episode of On Cinema. (Dark meta anti-comedy is the best way to put it?) A guilty verdict and jail time appear certain, but he walks away on a mistrial thanks to one juror holding out. Now, in an act of total retaliation and know-nothing, Heidecker decides to run against the district attorney that tried him, that crusty old Vincent Rosetti (Don Pecchia). Tim’s racking up bills as he glad-hands with locals in Oakley sunglasses and rolled-up sleeves. And get this: his campaign manager, Toni Newman (Terri Parks), was the juror who helped get Heidecker his mistrial. She loves wine, is obsessed with Mr. Heidecker, and has next to no political experience.

And what’s his platform? Crime, like, in the sense that there’s too much crime. He’s read the demographics from a 30,000-foot view, and there’s a rat problem. And ballots. He needs votes. And money. Oh, and volunteers. But money first for the volunteers? And people should go to jail forever. If they’re guilty of course. But no prosecuting the innocent like Tim Heidecker, innocent concert promoter.

Platform Coming Soon: Because Mister America plays like a truncated inside joke, of course Heidecker bought a domain for his phony bid. It’s reasonably funny, with badly photoshopped images, abundant namechecks of On Cinema regular Joe Estevez, and a “platform” page with nothing but Coming Soon clip art. But that’s it right there. This is Mister America’s ethos in short order.

Here’s a comedy about a slovenly dog chasing a car: Heidecker just wants to run, then figure out details later. What’s policy when you can do cool things like design hats and beg for likes online? And that’s the joke. That is Mister America’s blessing and burden. This Heidecker project is slimmer than a Trump promise, although it is purposely funnier.

Heidecker’s bid for an AG position is the spine of the film’s obvious shots at politics in 2019, riffing on the idea that it’s all a game of veneers. For whatever this is worth, and it is worth something, Heidecker commits to his own ugliness and idiocy, which makes Mister America’s haphazard joke ratio worth at least a passing glance. And eventually we see that there is something here: a strangely serene meditation on what makes the wrong guys run. 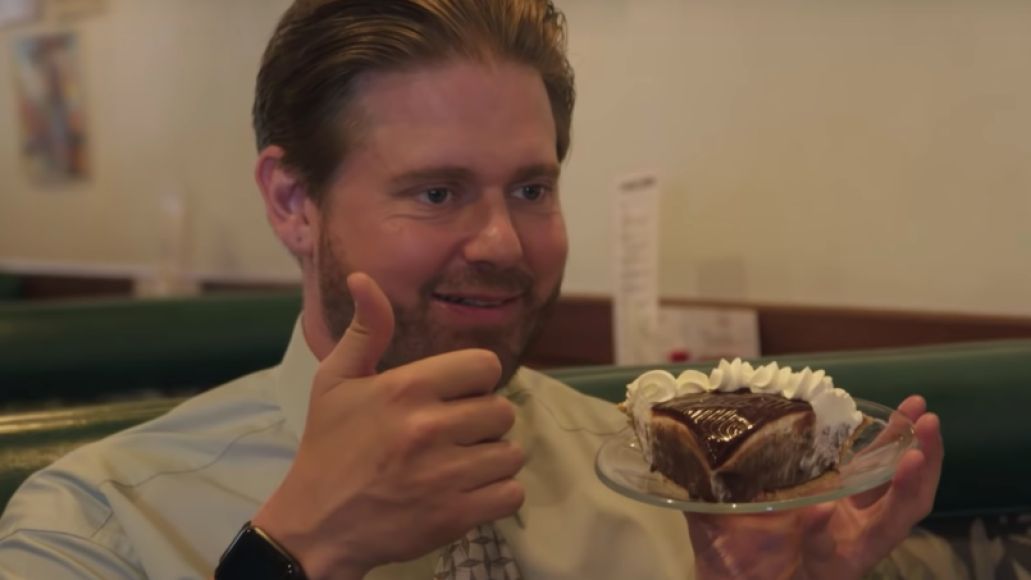 Election Litter: What if a politician was even lazier than, and not nearly as well-funded as a dime-store racketeer like Trump?

The best jokes can be found in Heidecker’s half-hearted effort, his incoherence, and his attempts to spin his way out of a shady past. (At one point, On Cinema cohort Gregg Turkington shows up to name a litany of Heidecker’s sins, such as not vaccinating his child, selling illegal medicines, and constant anger issues.) Heidecker can sputter about phrases he likely picked up from the news, like ‘career politicians’ or ‘swamps’ or ‘outsiders shaking things up’. But he sure can’t string them into a coherent sentence. These bits are looser-fitting than Bernie’s suits, adding up slowly in a short framework.

Every damn day, there is this urge to scream loudly at the most transparently unqualified people who campaign. “You did this to promote yourself, or interview for a TV hosting gig!” Mister America argues for itself as the venting board we need right now, with actual failures and even some consequences of thoughtless action for those who abuse systems. Heidecker taps into the mantra of not trying and seeing how far it gets him, and it’s beyond frustrating but in a good way if that makes any sense.

Reptilian Rhetoric: Your mileage may vary for this sort of goon show, but to say nothing of Heidecker’s mindfulness for making himself a gaffe machine would be unfair. He is a lizard man, and a quite convincing one at that. He happily lets his gut hunch over his belt while his chin falls in to his neck before passing out on camera. He thinks he can dodge the documentary crew while swearing up a storm into his phone. And he doesn’t know when to shut up about a statue of Martin Luther King Jr., because the longer he goes, the more incorrect and insincere his appreciation of history becomes.

The Verdict: Mister America aims for the acerbic pitch of a ‘70s alternative political farce like The Candidate, but the parting feeling is that it’s just an overdeveloped ramble. It’s not ha-ha funny, which is fine in the world of a muted humor like this. But like Heidecker’s campaign, it’s not entirely convincing as a satire either. In any case, Heidecker doesn’t need your votes on this one. There’s a lot of sharp-edged political satire on the market right now, and if you’re burned out by [gestures to the press, the Internet, Washington D.C.], no one will blame you if Heidecker’s mush-mouthed jargon humor isn’t your ticket.

Where’s It Playing? One night only in theaters on October 9th. Probably on demand soon enough. No need for a voter ID card, either.