Track by Track is a music feature that allows artists to take their fans and listeners deep into their latest record with a concentrated breakdown of every song. Today, Jim James and Teddy Abrams explain their new collaborative orchestral album, The Order of Nature.

My Morning Jacket singer Jim James has teamed with conductor/composer Teddy Abrams and his Louisville Orchestra for a new collaborative album, The Order of Nature. Ahead of the effort’s October 18th release via Decca Gold, the whole thing is being premiered today on Consequence of Sound.

The nine-track album features five new songs by James alongside two tracks off James’ sophomore solo LP, Eternally Even, (“Here in Spirit” and “Same Old Lie”) and two Nina Simone classics (“The Human Touch” and “Who Am I?”). James delivered acoustic demos to Abrams, who then turned the relatively minimalist arrangements into sweeping orchestral compositions that reflected the lyrics’ examination of nature and humanity.

Speaking in a press release, James said the record reflects “on the fact that nature doesn’t know how to hate.” He continued, “Humans are part of nature, obviously, but why do we have this thing called hatred and how do we get rid of it? We’re fighting nature and thinking we can prevail over nature, but we’re killing each other and killing the planet.”

The Order of Nature was performed live at the Louisville Orchestra’s annual Festival of American Music on April 6th-7th, 2018. A one-take recording of that second night’s performance is what’s presented on the final album, free of overdubs. Take a listen below.

You can also see James and Abrams perform the newly arranged songs at a small number of dates over the next few months. Get tickets here.

For more on how the music of The Order of Nature came to be, James and Abrams have broken the record down Track by Track.

“Walking in the Snow”:
Jim James: It’s the introduction thematically to the whole record and sets up what I’m trying to talk about: How do we get humans back into the proper alignment with nature and live in accordance to that?

Teddy Abrams: I used lots of oscillating woodwinds passages, sustained and swelling brass intervals, plus a variety of bell-variants in the percussion section to give the orchestration both the lightness and brightness of a snowy setting and the breadth of a landscape painting.

“Here in Spirit”:
James: I wrote that after the Orlando nightclub shootings a few years ago. The chorus says, ‘If you don’t speak out we can’t hear it.’ It’s just encouraging people to speak up about stuff they care about.

Abrams: Like a creative chef, an orchestrator can combine instruments in unusual ways to create new sounds which evoke the more electronic elements of Jim’s original track. I attempted to accomplish that with specific woodwind blends or combining low strings with sustained bass clarinet and contrabassoon to replicate an electric bass, for example.

“The Human Touch”:
James: Nina Simone performed it on a piano album of hers and I just fell in love. It’s about this notion of losing touch with each other, and she sang that song in ’67 or ’68 and it’s only gotten worse with our technology and our abuse of social media.

Abrams: As with any arrangement of a jazz standard, the orchestration needs to be tailor-made for a specific singer’s style and voice type. Instead of going in a traditionally bluesy or Sinatraesque direction, I created several layered textures to give Jim a kind of instrumental bed so that he could take the vocal elements to an expressive extreme.

“In Demand”
James: I was trying to paint a scene of people peacefully protesting, because that’s been one good thing about the whole Trump era. More and more people are speaking out and showing up to protest. It’s about speaking out in an era where there’s so much hatred and so much bloodshed and violence.

Abrams: Drawing on Philip Glass, Steve Reich and John Adams, I used repetitive orchestrational cells to convey the heaviness and poignancy of the lyrics. Percussion plays an important role in the two parallel buildups in the song. A whole array of gongs and suspended cymbals are hit successively faster to provide a sense that this wash of sound completely overtakes the music.

“Back to the End of the World”:
James: It’s about trying not to live in the past and trying to stay awake and live in the present. We all get hung up on nostalgia sometimes and it’s about living a life in the now and not getting trapped in the past.

Abrams: I’m particularly proud of this orchestration and setting of Jim’s song, which references many different genres and styles of music. It starts off with a vary odd combination — a kind of Spanish guitar slow-dance with a theremin solo! There’s a little reference to Ravel’s famous Bolero in the snare drum and cello pizzicato, plus plenty of canonic and contrapuntal writing to provide a classical edge. 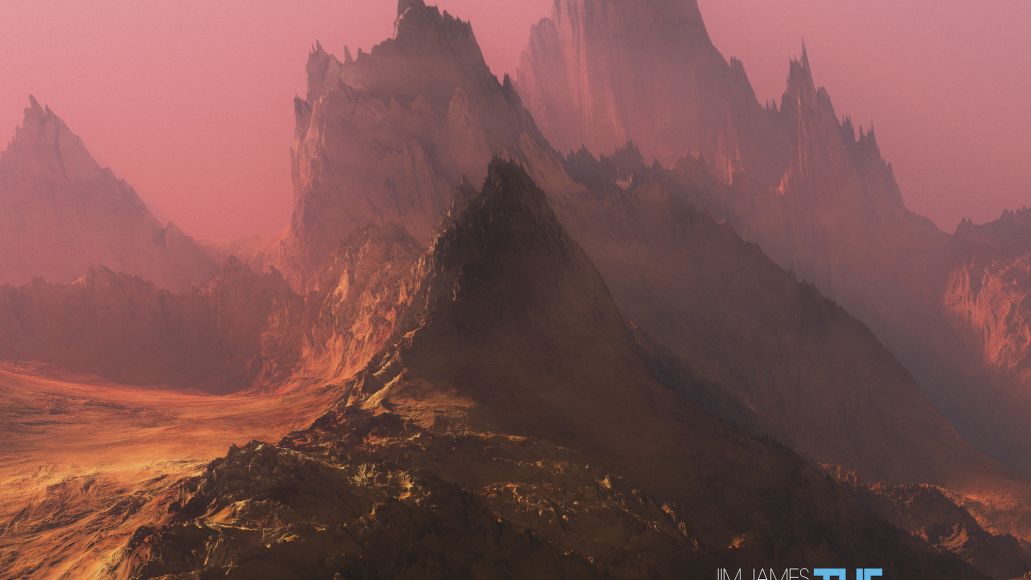 “Who Am I?” (A Leonard Bernstein song also covered by Simone):
James: It’s questioning who we are. If there’s reincarnation, will I come back as a fly or an eagle? In my conversations with people about religion … I always try to be the advocate for not knowing what happens. If people would only let down their guard and just admit that no one knows what will happen. Nobody wins this argument so why are we fighting about it?

Abrams: This song is written by one of my heroes, Leonard Bernstein, and our version was inspired by another American icon, Nina Simone, who famously interpreted Bernstein’s work. The introduction references 20th Century composers such as Respighi, Barber, and Britten, and then the rest of the song is set for Jim and me on piano. My piano part is fully improvised.

Abrams: I felt that in the context of our suite of songs we needed an up-tempo rock groove at this point in the journey, so I created a rock meets big band setting. The instrumental parts are particularly active and the brass provide a swing-era style that heightens the irony of Jim’s lyrics against the upbeat qualities of the song.

Abrams: I loved working on this setting, which combines a kind of French cafe style …and several sections that are directly inspired by the great symphonist Johannes Brahms. I use a wide variety of shifting instrumental colors and percussion effects to heighten Jim’s darkness/daylight lyrics.

“Same Old Lie”:
James: This song is real heavy and straightforward addressing my thoughts on the current mess we are in as human beings… but it ends on a hopeful note-with a nod to Sly Stone where I say, ‘We know in our hearts that we can make it if we try,’ and I really believe that still and wanted that to be the ending vibe to the whole thing. I don’t know how much longer I’ll be able to say it if we don’t make some real change, but I do believe we can turn it around.

Abrams: This song has a minimalist, driving groove that is emphasized by the hammered, repeating lines in the brass and strings. The oscillating woodwind passages from ‘​Walking in the Snow’​ come back in this song as siren-like gestures, and the ending of the suite is a layered buildup of rising scales all played at different speeds. It creates a feeling of watching an oceanic tide rise in fast-motion, fully enveloping the song cycle and ending with an intensive percussive dance whose groove rides above the waves.

Jim James and Teddy Abrams break down their orchestral album The Order of Nature track by track: Stream