Following the airing of Lifetime’s damning Surviving R. Kelly docu-series, Lady Gaga pulled her R. Kelly collaboration “Do What U Want” from all streaming services. Vowing to never work with the alleged serial abuser, she replaced the track with a version featuring Christina Aguilera. Now, it appears Gaga is removing “Do What U Want” from future ARTPOP re-releases altogether.

As NME points out, HMV’s pre-order pages for the upcoming physical reissue of ARTPOP make no mention of Gaga and Kelly’s joint single. When the album originally hit shelves in 2013, “Do What U Want” was listed as the seventh song on the 15-track LP. These new CD and vinyl editions of ARTPOP instead consist of just 14 songs.

The re-release is due out November 11th, and you can see a screengrab of the tracklist below. 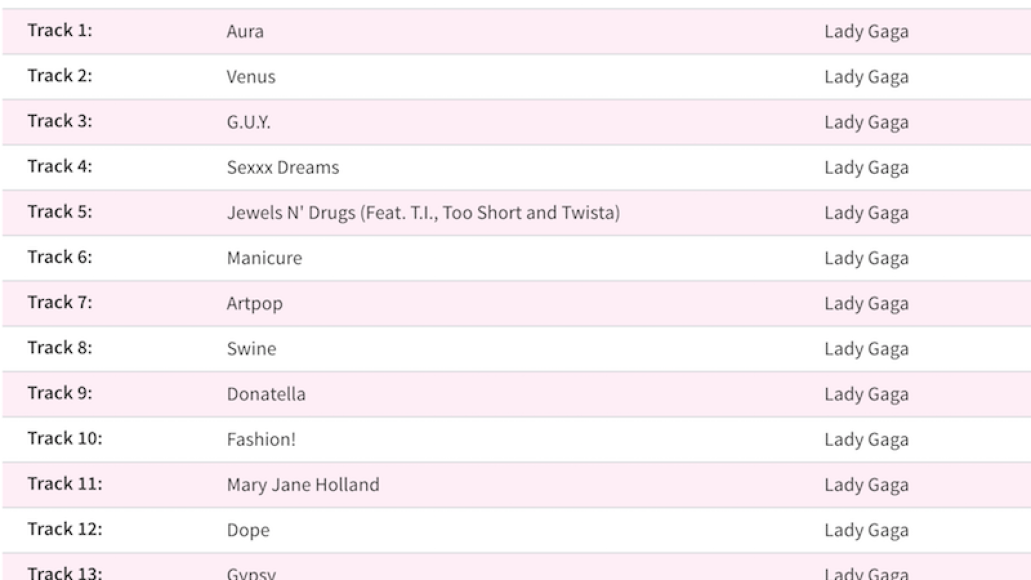 R. Kelly and “Do What U Want” removed from new ARTPOP reissue

In her statement condemning Kelly earlier this year, Gaga apologized for collaborating with the disgraced R&B star and said she stood behind the women featured in Surviving R. Kelly:

“I stand behind these women 1000%, believe them, know they are suffering and in pain, and feel strongly that their voices should be heard and taken seriously. I’m sorry, both for my poor judgment when I was young, and for not speaking out sooner.”

She also talked about her own experience with sexual assault and explained how “Do What U Want” came to be. “As a victim of sexual assault myself, I made both the song and the video at a dark time in my life,” the Grammy winner said, “my intention was to create something extremely defiant and provocative because I was angry and still hadn’t processed the trauma that had occurred in my own life.”

Gaga closed by pledging to “support women, men, and people of all sexual identities, and of all races who are victims of sexual assault,” going forward, a promise she’s keeping by scrapping “Do What U Want” from ARTPOP.

Kelly is currently facing 40-70 years in prison on federal charges in Illinois, in addition to a federal indictment in New York and a recent Minnesota criminal case filed in August. An investigation was also started in Georgia after the Surviving R. Kelly broadcast. Of course, these are just a few of the countless allegations of sexual crimes against Kelly.

Lady Gaga removes R. Kelly collaboration "Do What U Want" from ARTPOP reissue