Update – February 24th: Metallica have bowed out of Sonic Temple and Louder Than Life due to scheduling conflicts with James Hetfield’s recovery program.

Metallica are taking over a handful of US rock festivals in 2020. The iconic metal act will headline five Danny Wilmer Presents-produced events including Epicenter in Concord, NC; Welcome to Rockville in Daytona Beach, FL; Sonic Temple in Columbus, OH; Louder Than Life in Louisville, KY; and Aftershock in Sacramento, CA.

Not only will Metallica perform at each of the aforementioned events, they’ll play two distinct sets over two nights at each festival. Furthermore, these five appearances will be the only U.S. fests that Metallica play in 2020.

Today’s announcement was teased by Metallica and festival promoter Danny Wimmer Presents earlier this week via a countdown clock and a mysterious video clip, respectively.

“Metallica isn’t just another headliner,” remarked Danny Wimmer in a press release, “When Metallica takes the stage, it’s an event. It’s an experience. That’s the same standard we’ve set for every DWP festival — from the first band to the last band, and everything that happens in between. I can’t wait to bring the biggest band in the world to the biggest rock festivals in America.”

Tickets for all five festivals events are on sale now for Metallica fan club members and for past purchasers of tickets for Danny Wimmer Presents events. A general public onsale begins Monday, October 14th at 9AM PT / Noon ET. Visit MetallicaXX.com for more information. Through November 19th, Danny Wimmer Presents will donate 25 cents from each ticket sold to Metallica’s All Within My Hands Foundation.

As of now, no other bands have been revealed for any of the above festivals, but past years at each event have featured a who’s who of major hard rock and metal acts.

Metallica recently postponed their Australia and New Zealand tour as frontman James Hetfield re-entered rehab for addiction recovery. However, with today’s news and a previously announced tour of South America still on schedule, it looks like it will be all systems go for Metallica in 2020.

The 2020 festivals will take place as follows: 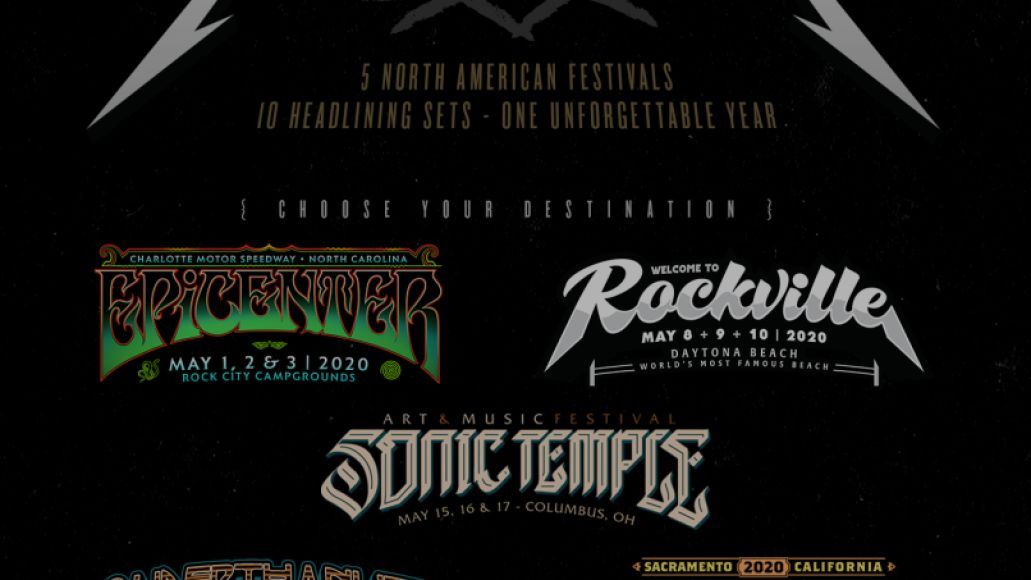 Metallica to headline five major US festivals in 2020