Ten albums later (and one hours from dropping), Wilco comfortably sit atop a dense, audacious, and bewildering catalog. For over two decades, they’ve carved out their place in rock ‘n’ roll with their genre-defying brand of Midwestern alternative rock, one that crosses over into everything from folk to experimental to bluegrass.

When Jeff Tweedy, bassist John Stirratt, drummer Ken Coomer, and multi-instrumentalist Max Johnston came together to form Wilco in the wake of Uncle Tupelo’s demise, none of them knew what would follow — and most wouldn’t follow. Today, the only remaining original members are Tweedy and Stirratt. 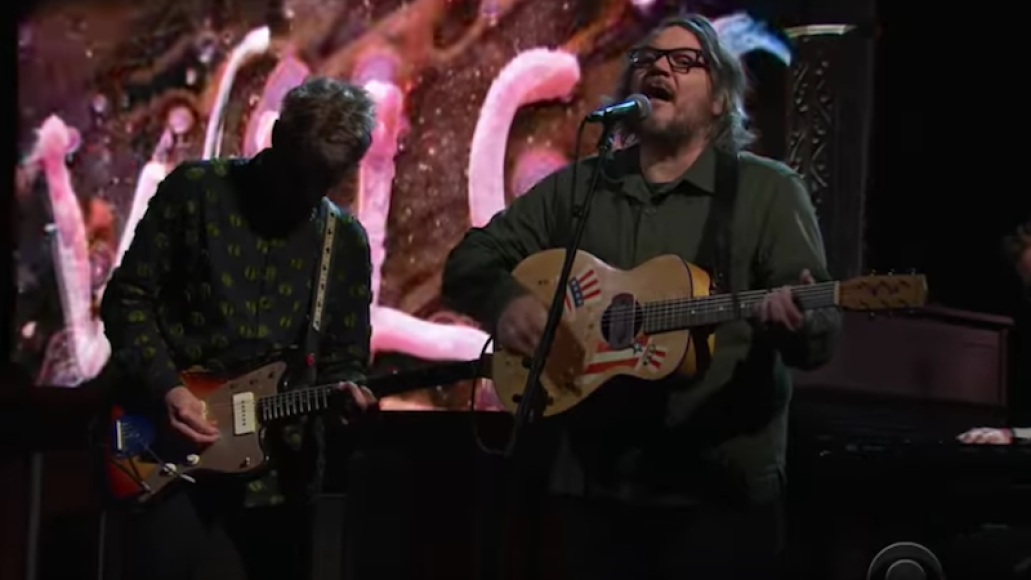 Wilco on The Late Show with Stephen Colbert

Since then, Wilco’s had its lineup shaken but hardly stirred, ultimately proving to be resourceful and resolute enough to stave off any drama that might otherwise bury a band six feet under. To that notion, they’re a complicated outfit to fully crack, which is why we decided to assemble this breezy guide for the assist.

So, withhold any “Reservations” and stop wondering “Where Do I Begin”. Ahead, you’ll find 10 tracks that best encapsulate the entire Wilco catalog, and don’t worry, we’re going to walk you through them “One by One”, that way you can keep listening “On and On and On”. If anything, consider this your “Radio Cure”.

Country twang, gang vocals, fiddles swaying, and banjos plucking … sounds like Wilco right? The band just can’t seem to shake the spirit of their alt-country roots, and we don’t want them, too. Simple songs laid the solid groundwork for Wilco to build upon over the last 20 years, and “It’s Just That Simple”, written and sung by Stirratt (whose tenor rings solid and true over Lloyd Maines’ signature steel guitar), is a perfect example of those humble beginnings. Songs from 1995’s A.M. still lovingly haunt the band, and sometimes we catch a glimpse of the (cherry) ghost that was Tweedy before he realized every circle needed a center. To date, it’s the only Wilco song Tweedy didn’t write or sing. ::cue piano crash or eerie strings::

Looking back, the six-and-half-minute epic that cracks open Wilco’s 1996 sophomore effort, Being There, is the true, original calling card of the Wilco we know and cherish today. It’s the first song Tweedy wrote for the album, a pseudo-dialogue between a tortured rocker and a fan that’s told more or less from the latter’s point of view. “It’s only a quarter to three/ Reflecting off of your CD/ You’re looking at a picture of me/ You’re staring at a picture of me,” he seethes. Chaos reigns as Jay Bennett, the late multi-instrumentalist who had joined to replace guitarist Brian Henneman, goes hog wild with crunchy noise and screeching strings, previewing the kind of sonic tinkering that would follow on Summerteeth and Yankee Hotel Foxtrot.

How do you put music to lyrics written half a century ago? Well, you get Wilco and Billy Bragg in a room and hand them the keys. Approached by Woody Guthrie’s granddaughter in the late ’90s, the great collaborators took a stab at fleshing out a handful of tracks written by the late singer-songwriter but never set to music. If not told by someone in the know, few probably notice that “California Stars” is not a Wilco song. Tweedy’s country roots (see: Uncle Tupelo) are unearthed here and blend perfectly with Guthrie’s lyrics, breathing life to this mix of Depression-era optimism and true love. “I’d love to feel your hand touching mine and tell me why I must keep working on,” Tweedy sings. “So I’d give this world just to dream a dream with you.” Fans continued to dream that dream with Bragg and Wilco into Mermaid Avenue Vol. II & III.

Or, Tweedy and Bennett’s beautiful, dark twisted fantasy — well, for at least one of them. On 1999’s Summerteeth, the band’s sonically bright and lyrically black-lit third album, the pop song is Tylenol — not a product of good times but protection from disease. “A Shot in the Arm”, for one, is a crutch for cigarette-happy insomnia and self-medication cravings, featuring Tweedy literally singing about the positive power of the major key. Were these synth-frosted hits tantamount to “This Is Fine”? Or were they prayers for change? Either way, everything wasn’t fine, not on a song with a one-mantra coda like, “What you once were isn’t what you want to be any more.” It’s just like a big, toothy, forced grin that doesn’t resolve any worries but adds plenty of wrinkles.

Like a devious younger brother (think: Eli to Peyton Manning), “I Am Trying to Break Your Heart” took what “Misunderstood” accomplished two albums prior and one-upped the son of a bitch with aplomb. The Yankee Hotel Foxtrot opener spans seven minutes and dazzles with a sonic landscape that would give Brian Wilson and Phil Spector heartburn. Tweedy soars high above Chicago, working in genius metaphors (“Let’s forget about the tongue-tied lightning/ Let’s undress just like cross-eyed strangers) with plaintive questions (“This is not a joke, so please stop smiling/ What was I thinking when I said it didn’t hurt?”), all while musician/engineer Jim O’Rourke roped it all together. Bennett’s role on this album cannot be discounted, as he was responsible for programming, guitar, piano, keyboards, synthesizers, organ, bass, drums, percussion, lap steel, glockenspiel, vibraphone, bells, vocals. Jesus (etc.) Christ!