This feature originally ran in October 2017 and has been reformatted.

Alas, we’ve arrived: November 2019. Taking a look around, it would appear not much has changed in our world since Ridley Scott’s gritty, grimy 1982 original hit theaters and introduced everyone to replicants, spinners, etc.

No, smartphones and dozens of streaming services aside, it seems that our society still has quite a bit of catching up to do in order to downward spiral into Blade Runner’s depressingly futuristic environs. At least there’s time for 2049.

All things considered, here are 10 things that, if we want our world to look like Blade Runner (which, why would you want to?), we should start working on right away. Or, in other words, here are 10 innovations Blade Runner said we’d have by now. 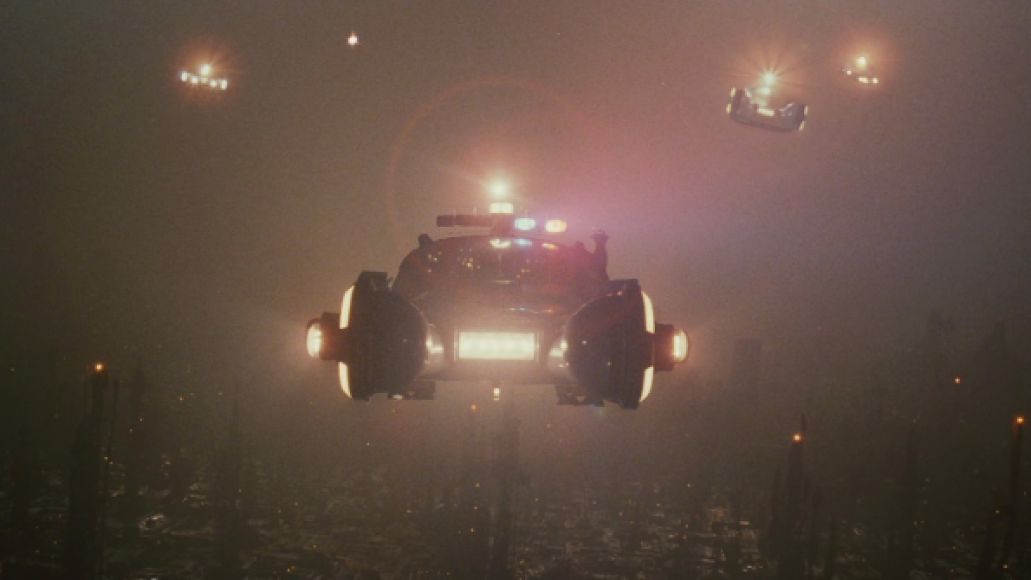 The flying car has been the symbol of “the future” since The Jetsons and Golden Age science fiction from the 1950s. No more traffic jams, no more road rage — just you and the open sky. Blade Runner gave us hover cars, but Syd Mead’s iconic design focuses on utilitarian chunkiness instead of sleek curves, offering Deckard a flying car that’s just there to get the job done.

How Close Are We? To be fair, inventors and designers have been working on flying cars since the 1910s, and several companies have already made successful prototypes. However, we’re still a long way from using them in a real-world setting. 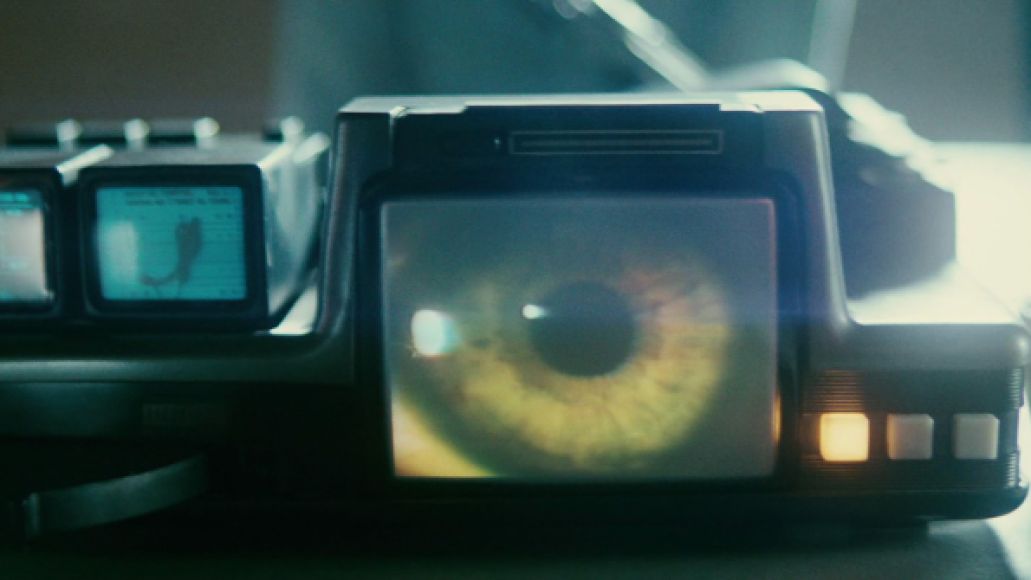 Ever wonder if your coworker is really human? You know, the one who keeps eating your packed lunch without compunction? Blade Runner’s future provides a kind of Turing test in the clunky, cumbersome but visually striking Voight-Kampff test, an inventive mix of eye exam and lie detector meant to determine whether the subject is a replicant.

How Close Are We? Obviously we’d need replicants to justify building a Voight-Kampff (we’ll talk about them later), but the Turing test from which it derives has existed since 1950, when mathematician and computer scientist Alan Turing invented it as a goal for artificial intelligence. Terrifyingly, a program named “Eugene Goostman” became the first machine to pass the Turing test in 2014, so we’d better get the V-K test ready for the next stage of robotic evolution. 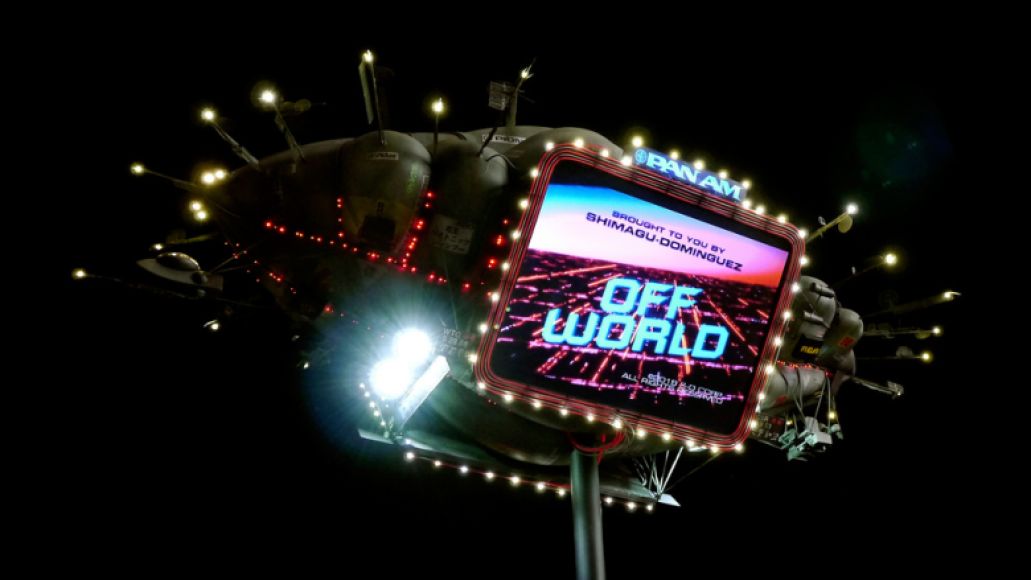 “A new life awaits you in the off-world colonies!” One of Blade Runner’s most intriguing background details is the continual mention of humanity colonizing space – huge blimps advertise the utopias that exist out in space while replicants toil as slaves to make life comfortable there for humans.

How Close Are We? While we obviously haven’t established colonies on other planets yet, our first step is Mars – President Obama announced in 2016 that his stated goal for the administration was to help Earth colonize Mars by the 2030s, and the Mars One organization is a private venture intending to do just that by 2035. 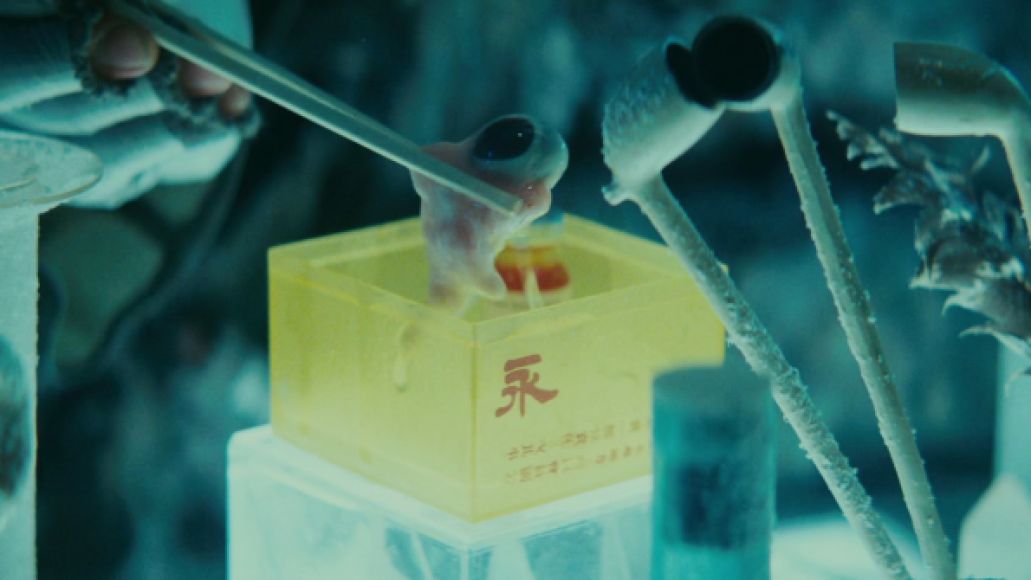 “If you could see what I’ve seen with your eyes.” Along with the presence of artificial beings, technicians and merchants in Blade Runner can also grow artificial organs, like James Hong’s genetic designer Hannibal Chew.

How Close Are We? While it’s nowhere near available to the average person, we’re closer than we think to making artificial or lab-grown eyes. In 2002, Japanese biologists successfully grew and implanted new eyeballs in a tadpole, grown from frog stem cells. Elsewhere, researchers have successfully turned human eye stem cells into photo-receptive neurons, creating the potential to re-grow a person’s eyesight.

Esper Photo (That Imaging Device That Can Turn Corners) 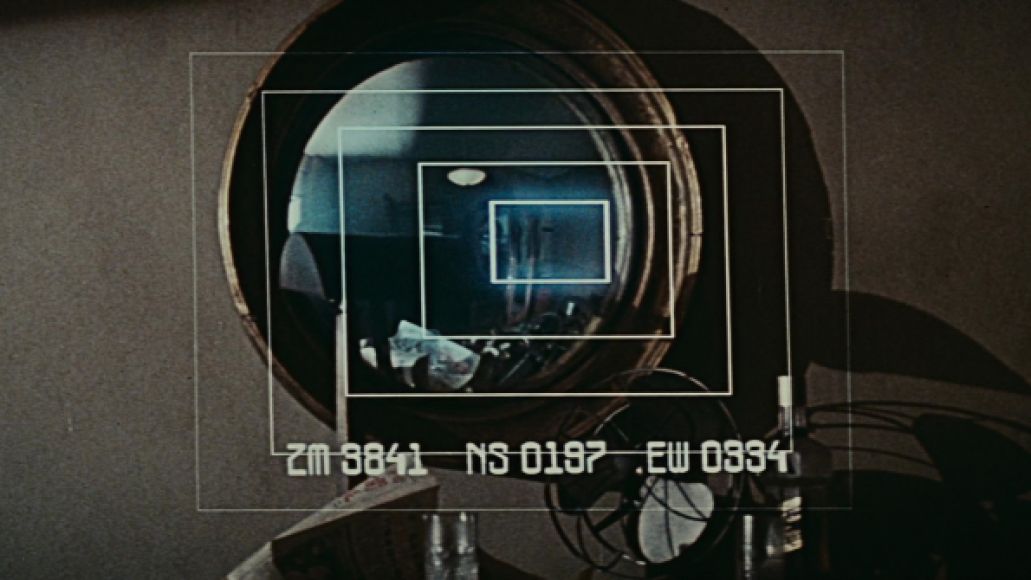 One of the more fantastical pieces of kit in the Blade Runner universe is the device Deckard uses to analyze a picture found in replicant Zhora’s apartment. Through voice activation, Deckard is able to zoom in on specific coordinates (“Enhance!”) and even turn around a corner to see something that’s clearly not in the picture.

How Close Are We? Not at all, unless you can break the laws of physics or change what is actually captured in a two-dimensional image. 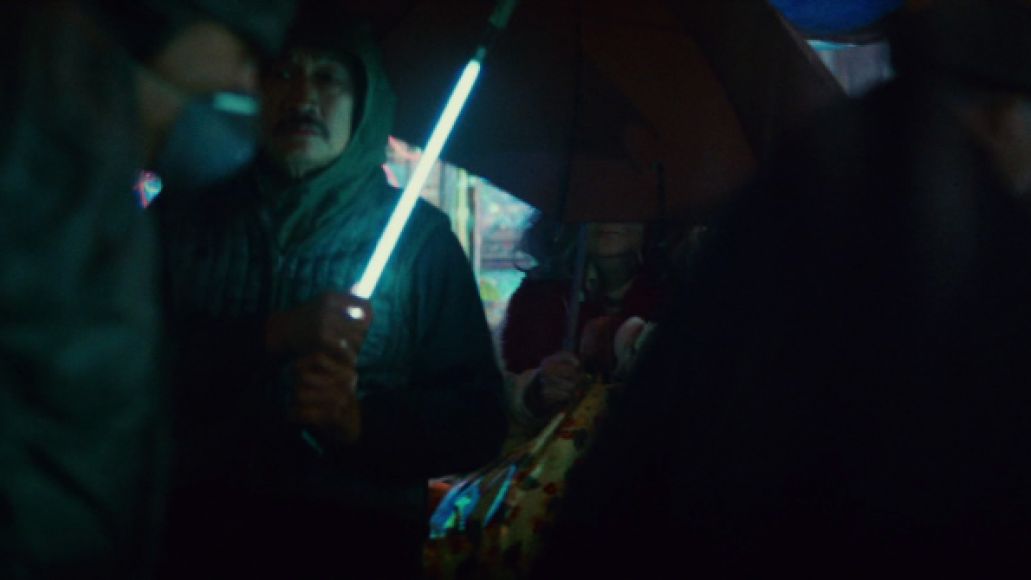 In the dim, foggy world of 2019 Los Angeles, where pollution and sprawling corporate ziggurats block out the sun, residents beat the rain and the low light the only way they know how: with giant umbrellas whose stems offer a bright LED glow to light their path.

How Close Are We? Okay, this one’s much more feasible, as a lot of companies offer light-up umbrellas that look the same as in Blade Runner. But they haven’t quite caught mainstream appeal, nor are they found in many major retailers. We just have to wait for the eternal darkness of a polluted future Earth, and they’ll come back into fashion.

They’re not quite replicants, but J.F. Sebastian’s mechanical coterie of bizarre, Napoleonic toy soldiers offer him some small measure of companionship, life-size automatons marching around and offering limited speech to those who enter.

How Close Are We? The state of robotics in 2017 is quite strong, with humanoid robots thrilling attendees of CES in 2017 with their lifelike nature and voice-activated personal assistants like Alexa seeing to your every need.

Deckard’s drunk-dial to Rachael after their introduction at Tyrell Headquarters comes courtesy of a fancy video pay phone, where Rachael awkwardly rebuff’s Deckard’s advances through VHS-level video transmissions. Even more helpfully, the device ends your call with a “Total Balance” likely auto-charged to your account.

How Close Are We? We’re so close to this device, we’ve already surpassed it! With the ubiquity of the smartphone, pay phones and phone booths are practically extinct in 2017. As for Blade Runner’s video feature, we’ve all got FaceTime for that.

Atari and Pan Am 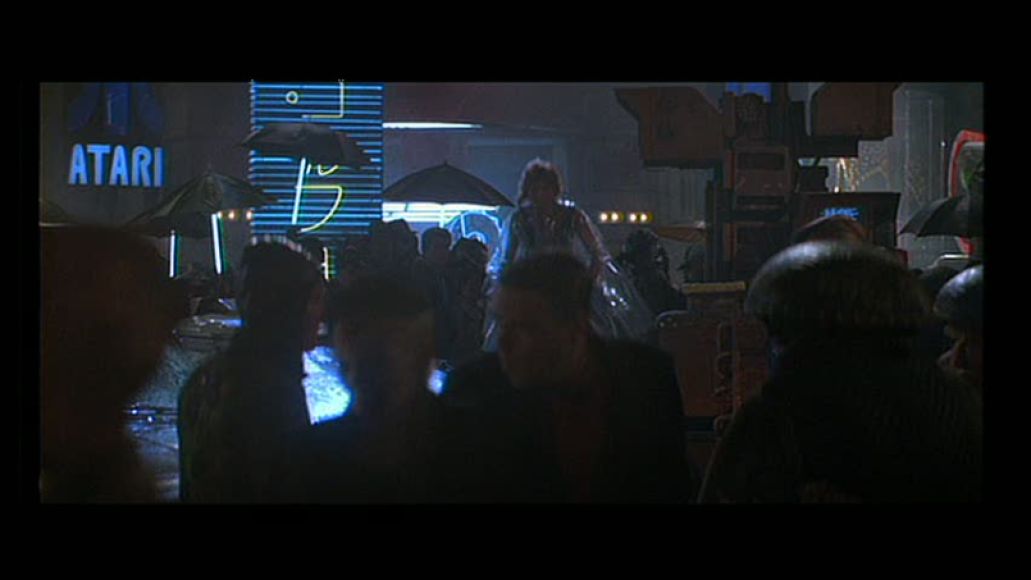 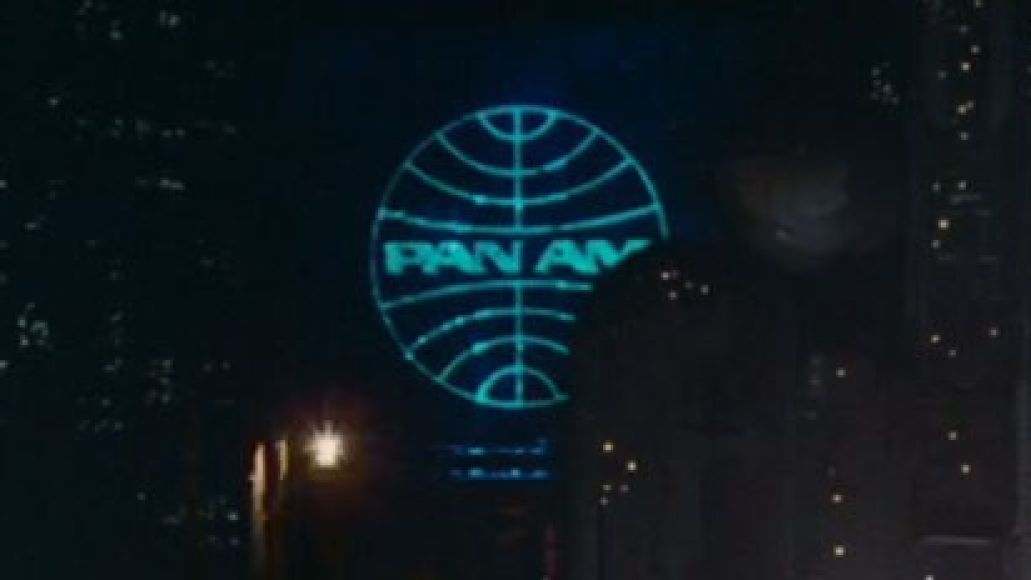 Corporate branding booms in the future of Blade Runner, with huge neon logos looming over every building and back alley in the LA of 2019. Companies like Coca-Cola have moving billboards that span the side of skyscrapers, but it’s gaming juggernaut Atari and pioneering airline Pan Am that make the deepest impression in a modern rewatch…

How Close Are We? …mostly because they don’t exist anymore. Okay, this one’s a bit of a cheat; we won’t have Pan Am and Atari in 2019 because they both went under in 1991 and 1983, respectively. (Pan Am collapsed because of the collapsing airline economy in the early ’90s, and the video game crash of 1983 forced the dissolution of the original Atari Inc., the brand existing only as subsidiaries of other companies since then.) 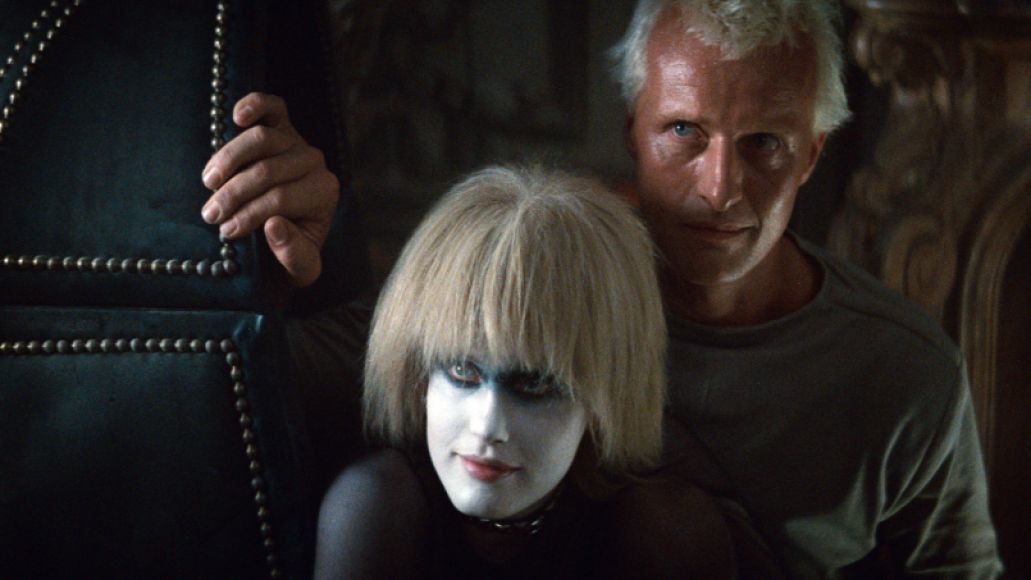 Replicants are an inexorable part of Blade Runner’s futuristic world, fully sentient, lifelike beings designed with superhuman strength and a four-year lifespan. While they were designed for the kind of backbreaking manual labor required to build the off-world colonies, Roy Batty’s contingent of replicant escapees shows their complex understanding of humanity, right down to their desire for more life.

How Close Are We? We’re still a long way off from artificial beings that look, sound, feel, and think exactly like human beings – even down to having a sense of philosophy – but advances in robotics are creating increasingly lifelike facsimiles of humanity. Hiroshi Ishiguro’s robotic “child,” Erica, may be the closest we have yet, a synthesized voice speaking through a lifelike visage.