Editor’s Note: This article was originally published in 2019. We are resharing today in celebration of 41 years of Pink Floyd’s The Wall.

Gimme a Reason takes classic albums celebrating major anniversaries and breaks down the reasons we still love them so many years later. Today, we celebrate 40 years of Pink Floyd’s The Wall.

Beginning in 1973, Pink Floyd went on one of rock’s greatest four-album hot streaks of all time: The Dark Side of the Moon, Wish You Were Here, Animals, and, finally, 1979’s The Wall. While each record is experimental and innovative in its own right, none were as ambitious as Roger Waters’ magnum opus, a rock opera that follows the story of the fictional Pink (loosely based on himself and original Pink Floyd member Syd Barrett) as he slowly cuts himself off from society in response to childhood traumas, drug addictions, and deep depression.

The album didn’t immediately receive the acclaim it receives today, with Robert Christgau criticizing the album’s “kitschy minimal maximalism with sound effects and speech fragments.” Despite the initial mixed reception, the album has gone 23x platinum since its November 30, 1979, release date and spawned Pink Floyd’s only No. 1 pop hit, “Another Brick in the Wall, Pt. 2”.

Today, it remains one of the greatest testaments to the artistry of rock and roll. Preceding the plethora of musician biopics we’ve received in the last 15 years, The Wall took us into the mind of the tortured rock star, perhaps with more vulnerability than any film. But in the end, there’s hope, if only a sliver — a hope that “the bleeding hearts and the artists” will continue standing for empathy, and if we follow suit, we might just reach those sitting outside the wall.

01. The overture delivers the album’s first leitmotif, the thundering guitars of David Gilmour and Hammond organ of Fred Mandel, reminding us that this is indeed an opera, a singular piece devised by Waters with precision, deep forethought, and tact.

02. Roger Waters immediately breaks the fourth wall as he questions the listener, “So, ya thought ya might like to go to the show.” But he warns us that the story we’re about to hear isn’t a lighthearted opportunity to forget our woes and listen to rock and roll. “Is this not what you expected to see?” he asks, before inviting us into his dark thoughts: “If you wanna find out what’s behind these cold eyes/ You’ll just have to claw your way through this disguise.” Damn.

03. The thunderous plane engines at the end of “In the Flesh?” and the crying baby (our protagonist, Pink) transport us from the overture to the narrative’s beginning via flashback, fully immersing us not just in the music of The Wall, but the story.

04. The interplay between Gilmour’s soft, soothing voice and Waters’ commanding, sometimes manic voice will be a theme throughout the record. It first comes to bear here on “The Thin Ice”, where Gilmour portrays the love of Pink’s parents and Waters plays the narrator forewarning us that things are going south.

05. The first two tracks play like a prologue, but the story really snaps into place here as Pink’s father dies in the war. From now on, there’s no going back; you have to listen to the end as Pink, overcome with grief, begins to wall himself off from society.

“The Happiest Days of Our Lives”

07. Waters’ opening bass line is punishing … as punishing as the tyrannical school teachers who cause Pink further grief and societal separation.

08. The track’s outro explodes into an angelic host of harmonies and rolling choruses of drums — a sharp contrast to the mobbish chant of the following track.

09. Pink Floyd (reluctantly) took a disco beat and turned it into a teen angst anthem. Not an easy task. It remains Floyd’s only No. 1 hit, largely due to the band’s tight chemistry with Nick Mason providing the four-on-the-floor beat, Waters providing the hooky bass line, and Gilmour scratching out funk chords like Nile Rodgers before lifting off into an unforgettable blues solo.

12. Reminding us of Pink Floyd’s crisp, acoustic hits like “Wish You Were Here”, “Mother” again explores Pink’s overbearing and suffocating relationships, which force him to pull away from reality, deeper into himself.

13. The song’s time signature is deceivingly complex, mirroring Pink’s instability at this point in life and his unsynchronized relationship with his mother.

14. Gilmour remembers the Blitz and “the falling bombs” here over somber acoustic guitar arpeggios. The song is made weightier by its semi-autobiographical nature, as Waters’ own father was lost in World War II.

15. The way the spacey, internal dialogue of “Empty Spaces” transitions into “Young Lust”, a classic ‘70s rocker, is so dramatic and perfect. Pink Floyd employ a more commercial rock sound here to both comment on casual sexualization in rock and roll and propel the album’s narrative forward as Pink uses sex to cope with his anxiety and depression.

16. Richard Wright’s Prophet-5 synthesizer performances on these two tracks are so tense as Pink invites a groupie back to his room before exploding into a manic, suicidal frenzy.

17. Waters’ lyrics “I feel cold as a razor blade/ Tight as a tourniquet/ Dry as a funeral drum” are some of the album’s most heartbreaking. His depression turns deeply menacing on “Don’t Leave Me Now” as Waters squeals with Jack Torrance-like wildness, “I need you, babe/ To put through the shredder/ In front of my friends.”

18. The way “Another Brick in the Wall”’s three parts each increase in intensity is one of the album’s genius developments. Containing many of the same melodic and instrumental facets as its predecessors, “Part 3” has seen Pink travel down a spiraling black hole into madness, hatred, and discontent, leading him to silence all external voices and dive behind the wall on “Goodbye Cruel World”.

19. Inviting us into the second act, Gilmour’s beautiful 12-string guitar arpeggiations are imbued with the cold, regret-filled loneliness Pink feels behind the wall as he realizes closing himself off from the world may have been a mistake.

20. Gilmour’s guitar solo wails over a commanding instrumental return of the “Another Brick in the Wall” leitmotif, mirroring Waters’ conflict in the subsequent lines: “No matter how hard he tried, he could not break free.”

21. When Waters ascends an octave in the song’s final verse, his broken, straining voice is so genuine as he pleads, “Don’t tell me there’s no hope at all.” The song’s final line, “Together we stand, divided we fall,” for the first time on the album expands the narrative to more than just personal. The Wall, it now seems, can be built by any institution, people-group, or country in addition to the individual.

“Is There Anybody Out There?” / “Nobody Home”

22. These two tracks are the loneliest point on the record. Highly effected guitars and synthesizers sound like ice crystals, cosmic voids, and crying whales as TV re-runs play aimlessly in the background to a numbed and detached Pink.

23. Two short vignettes, “Vera” and “Bring the Boys Back Home”, return us to the World War II and the death of Pink’s father. The first, a lush, symphonic piece reminiscent of The Beatles’ “Yesterday” references Vera Lynn’s 1939 song “We’ll Meet Again” as a source of false hope during a time of life-altering tragedy. The second sounds like a triumphant war-time anthem, but its lyrics ironically plead for peace and an end to the grief.

24. “You are only coming through in waves/ Your lips move, but I can’t hear what you’re saying,” Gilmour sings in the song’s pre-chorus. Whether he’s singing about apathy, depression, drug abuse, or any other mental health crisis, the picture of “coming through in waves,” as though he’s getting a fuzzy radio signal, is sobering.

26. Gilmour’s first solo floats lightly and gorgeously through the air, but that second guitar solo will bring you to tears every. single. time. Even 40 years later.

“The Show Must Go On”

27. Pink Floyd played with irony all across this record. But here, their Beach Boys harmonies and Beatles-esque keyboards bring attention to the irony of the rock star lifestyle. Like The Beach Boys and The Beatles, Pink Floyd have suffered abuses, depressions, etc. But the audience expects the show to go on happily all the same.

28. We find ourselves at the album’s beginning, having now received a full flashback of Pink’s life before the concert begins. He again questions, “So ya thought ya might like to go to the show.” But this time instead of feeling excited, we can only feel deeply empathetic and heartbroken.

29. The second verse introduces Pink’s neo-Nazi hallucinations. But while this is all just a hallucination in the story’s narrative, it rings true that walling yourself off from society will quickly lead to hatred, xenophobia, and self-righteousness.

30. The song’s chugging rhythm accented by Gilmour’s chimy guitar lines plays like a perfect precursor to the sound U2 would debut just a year later.

“Waiting for the Worms”

31. The song’s question, “Would you like to see Britannia rule again?” is unsettling in the MAGA/”Build that wall” age, as Dictator Pink calls on his subjects to “send our colored cousins home again.”

32. Pink abruptly snaps out of his hallucination, overcome by guilt and finally willing to wrestle with himself after remaining “comfortably numb” for so long. It’s a brave and difficult act to admit personal faults or to revisit personal trauma, both of which he does openly here.

33. Waters just went for it on “The Trial”, shedding the rock opera and opting instead for a full-blown musical theater number. But the over-dramatized performance couldn’t possibly be substituted for by anything else.

35. The album’s storybook epilogue reveals one of Waters’ main goals for The Wall — to make a stand for empathy, to give us his all and invite us, as best as he can, out from behind our own walls.

36. The album ends with the phrase, “Isn’t this where…”, which loops back to the opening track’s cryptic first phrase “…we came in?” This subtle touch highlights the cyclical nature of wall building. Sometimes we break through our emotional walls just to build them back up and start the fight all over again. It’s a disturbing reality, but Waters reminds us that there’s always a door leading to community and help if we have the courage to open it. 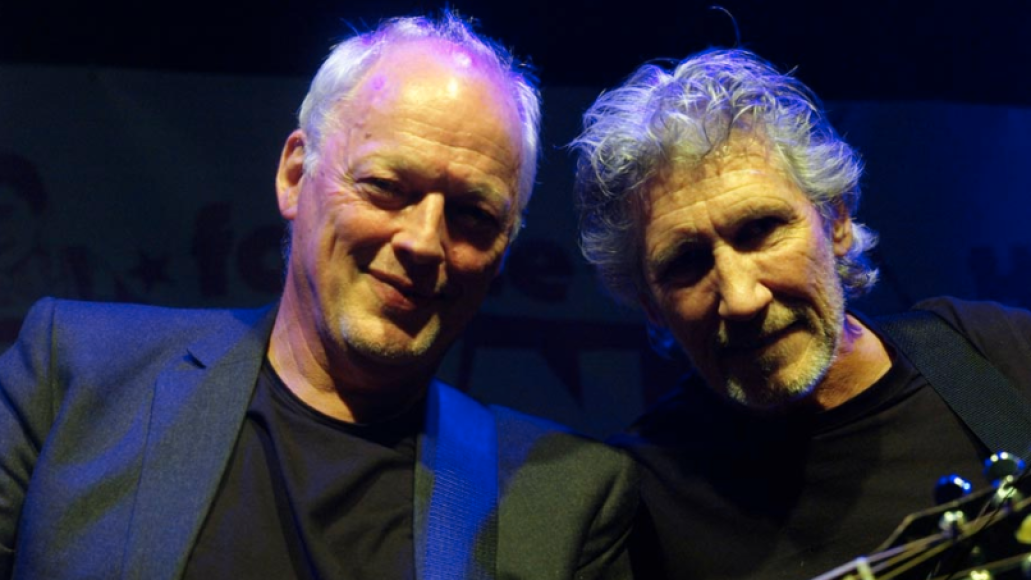 37. “The reason for walls is always fear,” Waters said in a 2010 UN film titled Walled Horizons. While Waters wrote The Wall as a metaphor for our emotional and mental health, it continues to hold deep relevance to international struggles, whether it be Germany at the time of the Berlin Wall, the ongoing Israel/Palestine conflict, or America and Mexico.

(Read: Not Just Another Brick in the Wall: An Interview with Bob Ezrin)

38. Producer Bob Ezrin and his team of engineers did a masterful job throughout the record. Not only are the instruments mixed impeccably, but the album flows from one track to the next with such ease using a myriad of tricks from sound effects to dramatic style flips.

39. The attention to detail and narrative on The Wall remains a starting point for anyone creating a concept album. It’s hard to imagine a record like Nine Inch Nails’ The Downward Spiral without it.

40. The album spawned some of rock history’s greatest live performances including the original tour, the Live in Berlin performance, Waters’ 2010-13 tour, as well as a 1982 feature film and an actual opera in 2016.