Bryce Dessner of The National already has three major projects under his belt this year. Along with National album I Am Easy to Find, the guitarist and composer issued El Chan, a collection of classical music. He also put out When We are Inhuman, a collaborative record with Bonnie ‘Prince’ Billy.

Dessner will squeeze in a fourth effort before 2020, the soundtrack to the new biographical drama The Two Popes starring Anthony Hopkins. The OST features a total of 21 arrangements, most of which were helmed by Dessner, who previously scored The Revenant. There are also contributions from Tinariwen and Mercedes Sosa.

“It was an absolute joy to work with such an incredible cast and team on The Two Popes. In particular I have always been a huge fan of director Fernando Mereilles and it was an honor to finally work directly on a film with him. His work is deeply musical and it was a wonderful journey to find the sound world for The Two Popes, which began with the intimate and incredible performances of Anthony Hopkins and Jonathan Pryce. This was the first film I’ve worked on a score where I got to visit the set as they were shooting in Rome for a few days and began composing in the room with the actors and crew. The score has moments of more abstract minimal and layered orchestral music which I wrote for Benedict’s scenes, and then music inspired by Argentina folk music (in particular Mercedes Sosa and Dinu Saluzzi) for which I spent a lot of time composing for the classical guitar again.”

The Two Popes soundtrack is officially out December 6th via Milan Records and is being previewed with a song called “Walls 2” that’s streaming below. The film itself opens hits Netflix on November 27th.

Dessner will play with the New York Philharmonic this weekend. He and The National also have a bunch of European tour dates scheduled for the next few weeks. Grab tickets to the band’s upcoming shows here. 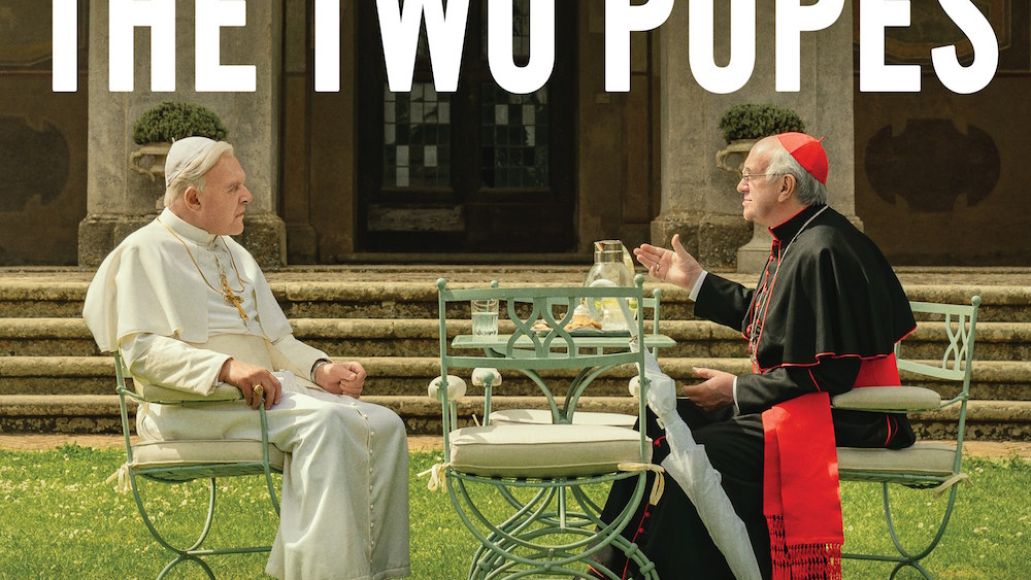 Revisit a trailer for The Two Popes: