The Pitch: In 1989, talented, but cynical magazine writer Lloyd Vogel (Matthew Rhys) is assigned a profile on Fred Rogers (Tom Hanks) by his editor (Sakina Jaffrey) in an effort to soften his reputation. In the wake of a disastrous encounter with his estranged father, Jerry (Chris Cooper), Lloyd is particularly wary of Rogers’ seemingly interminable real-life kindness and generosity.

As he struggles to balance his job and his relationship with his father, wife Andrea (Susan Keluchi Watson) and newborn son Gavin, Lloyd slowly learns to embrace Rogers’ teachings about love, anger, and fatherhood. In the process of writing his article on one of the most beloved figures in children’s television, Lloyd winds up learning how to move forward with his own life.

A Brand-New Sweater: Fred Rogers and his aspirational teachings are more culturally relevant than ever thanks in part to the one-two punch of Morgan Neville’s well-received 2018 documentary, Won’t You Be My Neighbor? and now Marielle Heller’s film. Although this is an adaptation of Rogers’ real-life friendship with journalist Tom Junod that came about as a result of the latter’s Esquire profile, screenwriters Micah Fitzerman-Blue and Noah Harpster have adopted an unorthodox narrative bracket by framing the story as an episode of Mister Rogers’ Neighborhood.

This means that the film features the typical segments that viewers see on the show wherein Rogers opens his front door, removes his jacket, puts on his iconic red sweater and shoes and introduces a segment for the day. In this case, Rogers shows the audience a picture of Lloyd, which serves as the entry point into the narrative proper, by way of the series’ trademark miniature city skyline, which is expanded here to include a mock-up of New York city.

Loner Mentality: Lloyd Vogel is a fascinating character for both Heller and Rhys. For the former, this is the second straight damaged, antihero protagonist that she has trained her lens on following the more traditional Lee Israel biopic, Can You Ever Forgive Me? As for Rhys, the former The Americans actor is a smart choice to play the role of a man dedicated to his job and struggling to connect with his emotional family life. He’s only been performing a variation of it for six seasons on a certain masterful FX series. 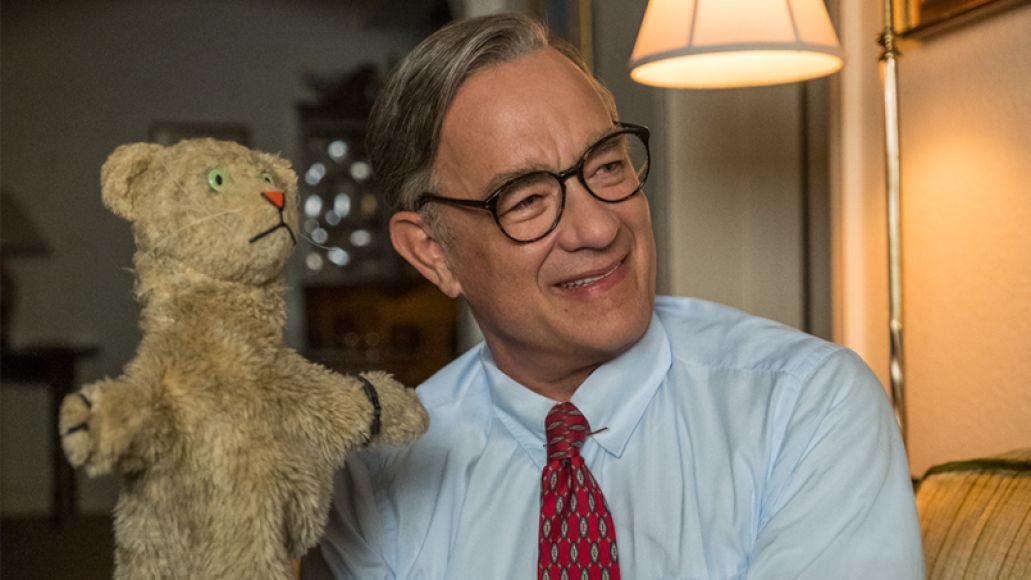 “Don’t Ruin My Childhood”: At its core, A Beautiful Day in the Neighborhood is concerned with issues of child rearing. Lloyd has significant daddy issues as a result of Jerry’s infidelity when Lloyd’s mother was ill, and the writer has never forgiven him. In the present, Lloyd struggles to process his complicated feelings for family: not only does he not want to spend time with his ailing father, Lloyd has resolutely refused to take time off from work since the birth of his son.

One of the biggest laughs in the film occurs when Andrea learns of Lloyd’s profile of Rogers and she warns him, “Don’t ruin my childhood.” It’s funny because it confirms that even Andrea is aware of Lloyd’s bad reputation; it’s also a testament to the impact that Mister Rogers’ Neighborhood had on a certain generation of children.

Finally, it reflects the film’s interest in acknowledging that children experience pain, trauma and challenges. A Beautiful Day in the Neighborhood suggests that the way these issues are addressed during seminal childhood periods directly impacts the kind of adults that we become. This becomes more evident the more time that Lloyd and Rogers spend together: while Lloyd is cynically attempting to dig up dirt to prove that Rogers is as fallible as everyone else and that his TV persona is a performance, Rogers is subtly forcing Lloyd to work on himself (almost like a human improvement project). At one point Bill Isler (Enrico Colantoni), Rogers’ PR rep, suggests that Rogers likes people like Lloyd, which Lloyd (mis)interprets as a synonym for “broken.”

The truth, of course, is something far less nefarious and far more human than that.

After Andrea reads Lloyd’s completed piece, she reflects: “This isn’t really about Mr. Rogers at all. It’s about you.” The statement is a fairly clear metatextual reference that applies more broadly to A Beautiful Day in the Neighborhood, which — by adopting the framing device — is actually highlighting Rogers’ principles to help both Lloyd and the audience watching the film to become better, more emotionally vulnerable and humane people. 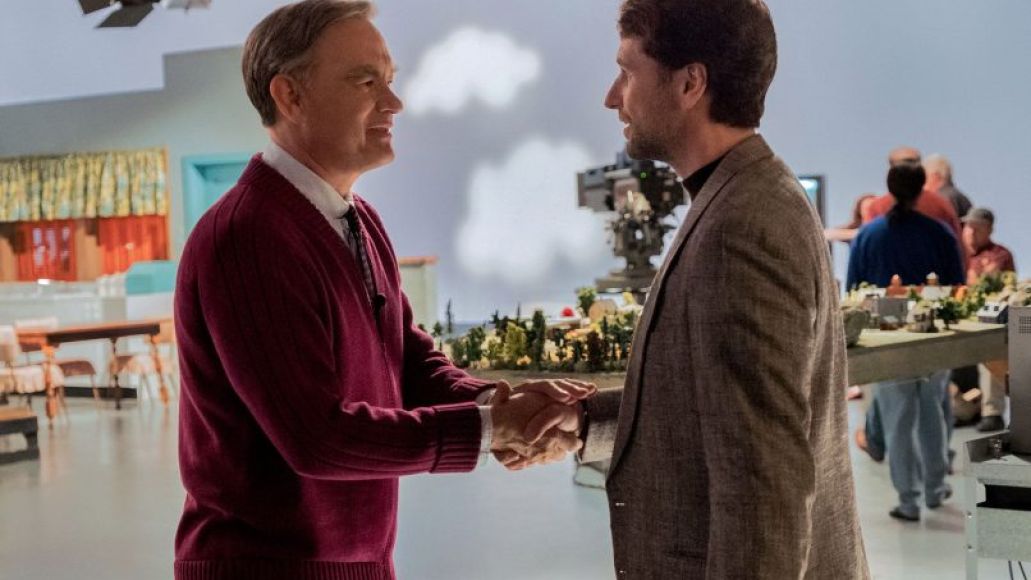 Won’t You Be My Friend? Unsurprisingly, Tom Hanks is the perfect man to portray the kindest “hero” in America. He manages to capture Rogers’ mannerisms without succumbing to imitation or parody. Part of the appeal of Hanks is that his mere presence naturally channels his real-life reputation for being warm and personable.

There’s also something enigmatic about Hanks’ Rogers. There’s a magical whimsy to the performance, akin to Mary Poppins, in that Rogers arrives at just the right time to help guide Lloyd from lost boy to caring father and husband (Peter Pan is even briefly visible in one scene). A Lloyd Vogel-worthy cynic could suggest that casting a megastar who so clearly embodies the same qualities as Fred Rogers is the most media-savvy move that the film could make … and yet it works because the actor and role are such a perfect fit. Audiences will inevitably fall in love with this charming, twinkle-eyed performance from one of the nicest actors in the business.

The Verdict: By refusing to adhere to traditional biopic tropes, A Beautiful Day in the Neighborhood becomes something far more fascinating. Its playful narrative structure — using the format of a Mister Rogers’ Neighborhood episode to tell a broad, appealing story about childhood, parenting, pain, and anger — helps make the film more memorable. Featuring an uncanny performance by Tom Hanks and an emotionally vulnerable Matthew Rhys, A Beautiful Day in the Neighborhood is a wonderfully kind and emotionally rich drama about letting go of the past in order to grow up.

Where’s It Playing? Mister Rogers returns to screens in a brand-new format on November 22nd.