The Pitch: When Richard Curtis is busy, who ya gonna call? Paul Feig and Emma Thompson. Last Christmas is a winsome rom-com about Katarina (Emilia Clarke), a Yugoslavian émigré living in central London in 2017 among vibes of post-Brexit anxiety and soft-focus Christmas lighting. Ah, Christmas, that concealer (or perhaps purveyor) of dread.

By day, Katarina works half-heartedly at a Christmas ornament shop called Yuletide. By night, she drinks, slums, parties, crashes, and does all the other things the young do to avoid responsibility. When she has some free time, she chases her dreams of becoming a singer and actress. Armed with a playlist of George Michael tunes, a high BAC, and a mysterious ailment, the film casually reveals over time that Katarina is having a fairly shitty holiday season.

But then she bumps into Tom (Henry Golding), an enigmatic bike courier with unlimited patience who dances like Fred Astaire and constantly reminds Katarina to ‘look up.’ Last Christmas is about second chances, hope, and listening to a ton of George Michael songs amid scene transitions. This isn’t necessarily a complaint, it’s just a consumer report. 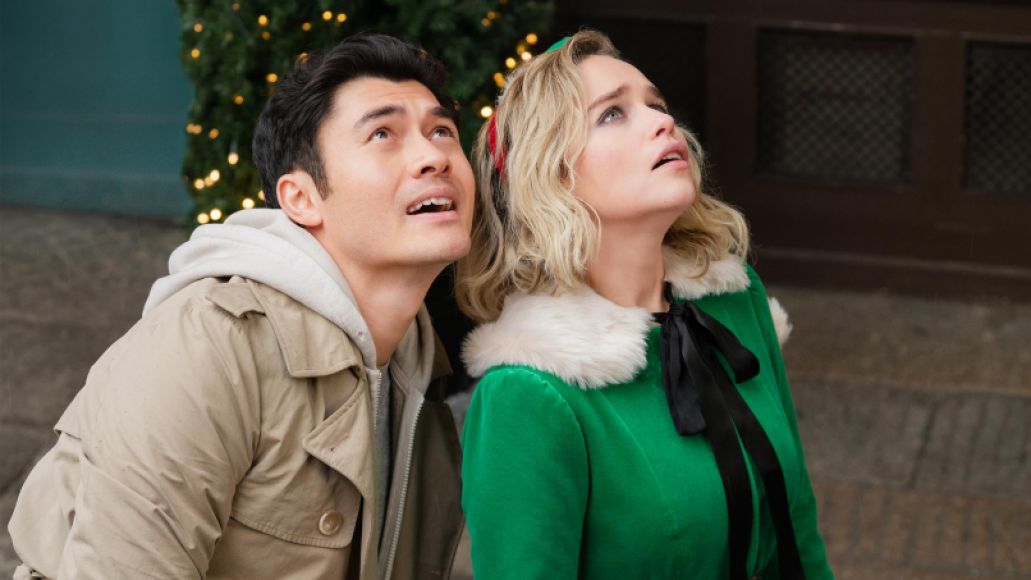 Pick Me Up: Last Christmas squarely plants itself as a modern take on the Christmas fable. Be forewarned: it’s mush. Yet a film that says, “Yeah, life can be shit, and the world is a scary place, but there’s always room for hope” is commendable. Hard lessons matter, but so do optimistic and upbeat ones, even if they can make you groan. Underneath all the gilded filigree here is a busy and sometimes heartfelt love story. Love for others. Falling back in love with yourself. Making amends. Forgiveness. Seasonal greetings and such. No, Last Christmas isn’t sponsored by Papyrus cards, although Godiva gets some screen time.

Katarina is broken, and Christmas is often like a big invite for depression, what with costs, weather, and its bombardment of messaging. But Last Christmas allows Katarina to make amends, which is sweet in its own way. Gandhi said the best way to find yourself is to live in the service of others, right? Katarina is introduced in a parade of fails and couch surfing, as she sets fire to art projects, blows fuses with hair dryers, and is regularly mean to her own family.

Grinchy, some would call this. It’s also funny, with director Paul Feig keeping things loose throughout. Working from a script by Emma Thompson and Bryony Kimmings, it’s a gauntlet of pratfalling Marx Brothers comedy at its best. Yes, Katarina is bound for the naughty list, but she’s kind of fun as well, and Feig allows for guarded laughs at her plight. It’s not gross, or too-cheap, but just right. 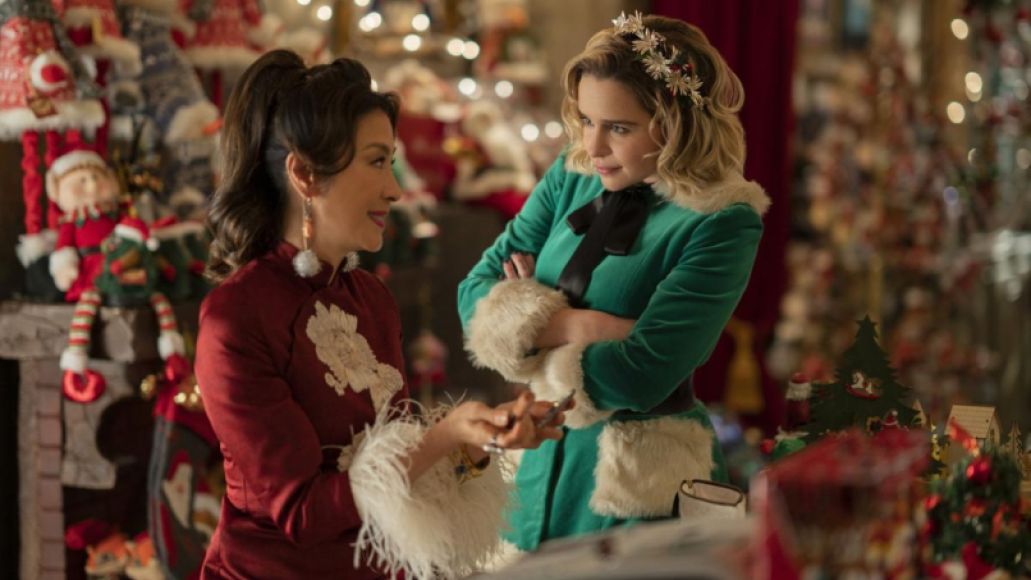 Everything She Wants: When the film shifts into a pursuit of atonement, something wonderful happens. Katarina, motivated by Tom, a sort of man-pixie, gets a new outlook. She starts spending more time with her parents, begins volunteering at a shelter, and gives thoughtful gifts to scorned co-workers and friends. Montages of the homeless inspire Katarina to take part in a Christmas talent show. She and Tom share lovingly lit walks down London alleys. Cutesy is the word, and it might all sound like a Live Laugh Love etching on the wall, but for a change, the words and actions seem fair. There’s no malice and a welcome dearth of cloying sentiment going on in Last Christmas. And Clarke gives her best impression of a modern Bailey figure.

Trickster deity Feig dips his funny bone into packets of sugar, and Last Christmas may be his most grab-bag directorial effort so far. Comedy’s not new for him, but outward, unabashed romanticism and holiday hoopla sure are. To be harsh, there’s a twinkly glee that, well, will summon the surliest feelings among folks like say, me, who just don’t jive on the cinematic equivalent of eggnog at times.

That’s not to say this is trifle, Last Christmas is amusing, and sweet, and gifts us with enough good stuff to help ignore the chintzier bits. The repetitive imagery of cold nights and Christmas lights warms up over the film. The mall-based signage and promotions can be ignored. And the stars seems happy to be playing around and sharing positive messaging amidst icy times, film-wise, and culture-wise. Feig, with all these disparate ribbons, wisely focuses on Katarina’s comeback, and somehow makes something of the material. YES, it still sounds corny! But Last Christmas is a kind effort all the same.

WHAM! Bam, Thank You, Ma’am: A quick question: Is George Michael’s “Last Christmas” really so big a deal for some people during the holidays? This is not meant as a cynical question, but one of intent and use. Studio-affiliated labels seem to be cashing in lately with pop-rock flicks like Yesterday and Bohemian Rhapsody. But is “Last Christmas” powerful enough with Michael’s smooth ♪ gave you my heeeeart ♪ crooning to necessitate a whole story, or was it just a nice bow to put atop a pre-existing movie?

Why not make a movie about Paul McCartney’s “Wonderful Christmastime” or “Christmas in Hollis: The Movie”? The point being, the George Michael music, however lovely his voice was and still is, comes across like a bit of a gauche star on the top of a perfectly nice tree. Perhaps more importantly, for a movie that admits in the credits that it’s “inspired by” a super hokey pop jingle, this could have gone much worse. The wham-you-over-the-head music is forgivable. Tis the season. 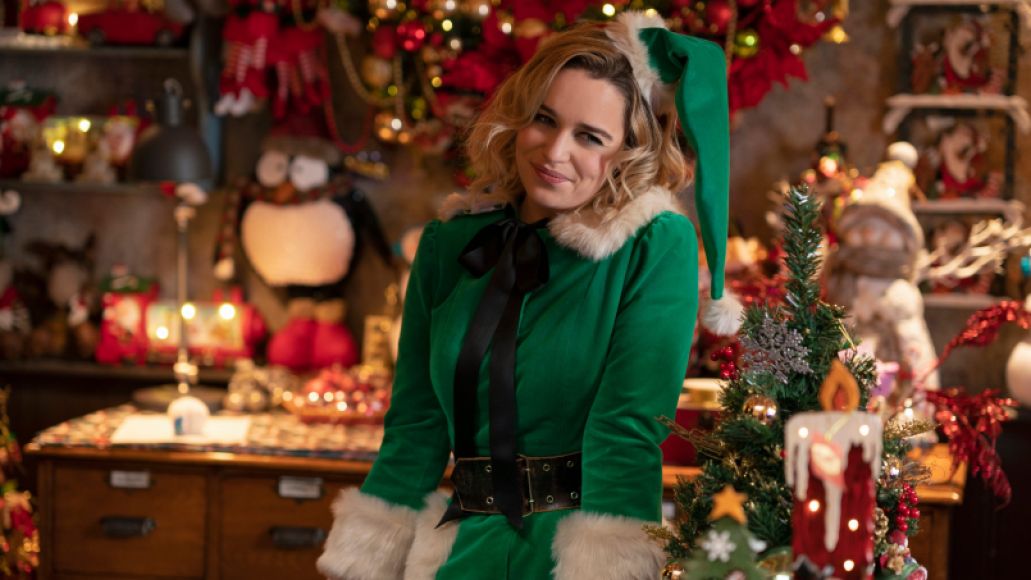 The Verdict: When pressed against the populist claim that “rom-coms don’t play in theaters anymore,” Last Christmas feels like a surprise present. Think of it like a stocking stuffer amidst pricier fall roll-outs, all glittery and peppermint-sweet. And even its ornamental excesses become beside the point, because the core conceit actually works. Boy, those George Michael songs bind the scenes together like Gorilla Glue. Nothing says quaint like Tom Ford storefronts, too. But these things fade into something warmer, grander, and even a bit telling. Last Christmas is content to be a Hallmark card with “get well soon” written inside of it, and the senders seem to really mean it.

Where’s It Playing? Everywhere, Friday November 8th. Likely to get ahead of Christmas and sneak in slow money, right?