This article is sponsored by StubHub. Be sure to pick up your Hamilton tickets for this holiday season before they’re history. The show is currently on tour with dates scheduled all across the nation.

First staged on Broadway in 2015, Lin-Manuel Miranda’s production was almost instantly hailed as a transformative piece of cultural and artistic brilliance. In 2016, it won 11 Tony Awards (out of a record 16 nominations) and a Grammy. The Hamilton soundtrack and its offshoot Hamilton Mixtape are certified platinum and gold, respectively, for sales and streams/downloads. For his creative efforts, Miranda was awarded a MacArthur Genius Grant in 2015, a Pulitzer Prize in 2016 and was a 2018 Kennedy Center Honoree.

Long story short, Hamilton is a cultural landmark, the rare piece of art that pulls off the coup of being both critically adored and a commercial juggernaut.

Of course, when something captures the pop-culture zeitgeist, there’s bound to be a backlash. Hamilton is no exception to that. Critics scoff at the hokey, effusive praise both the show and Miranda have received and are quick to hyper-magnify the flaws they see in both.

Here’s the deal: the folks that sneer at and tear Hamilton apart are wrong. Oddly enough, a lot of the people fawning over it are also wrong. Hamilton is, in fact, a masterpiece. Just not for the reasons the hoopla would have you believe.

First off, Hamilton is not a “hip-hop musical,” nor is it an unconventional piece that changes the very essence of musical theater. Viewing it through either prism is a setup for disappointment, confusion, and statements like, “This isn’t rap.” If anything, the core of the story and its structure is classic Broadway through and through. What makes it special is how those conventions are reinvigorated through the use of musical forms atypical of the theater experience.

That influence takes the shape of ‘90s NYC hip-hop and R&B-rooted pop. Those are the sounds that Miranda listened to as a kid in Washington Heights. But he also grew up with his parents’ record collection of Broadway cast recordings. It’s the way those two seemingly disparate cultures, urban and theater music, are seamlessly incorporated that make Hamilton sound so bold.

Just take a look at its primary anthem, “My Shot”. The vehicle through which Alexander Hamilton reveals his mental acuity and intense drive to create a legacy, even if it kills him, is referential to both Notorious B.I.G. AND “You’ve Got to be Carefully Taught” from Rodgers and Hammerstein’s South Pacific. “My Shot” is the most obvious past-present musical convergence, but you can hear that marriage of ideas throughout the soundtrack, whether it’s “The Story of Tonight” sung by Hamilton and his cohorts or “Satisfied”, the heartsick ballad sung by Hamilton’s sister-in-law. The tunes are hooky like pop songs for sure, but ultimately they are very much show tunes. They just happen to be as beholden to the melodic sensibilities of Shawn Carter as those of Stephen Sondheim.

This convergence of past conventions and mores with the real world’s cultural present permeates throughout the story and particularly in its casting. In fact, more than any sort of devotion to its titular character or fealty to the Founding Fathers, Hamilton is really about how history can be viewed through a modern lens.

The New York City of Hamilton mirrors the New York City of today, a city teeming with possibilities and diversity of opinion and people. This is reflected in the dialogue of Aaron Burr, Alexander Hamilton, and military leaders of the late 18th century, and it’s connected to the current moment by having these words expressed by a multi-racial cast.

For some, this diversity is seen as a needed shot in the arm to a form of entertainment that, aside from West Side Story, is viewed as a cultural fiefdom for white America. To others, however, it’s seen as a cover for what is, once again, a story that deifies the accomplishments of white men. The former perspective is technically accurate, just very, very narrow in scope. As for the latter, that criticism has some validity, but ultimately misses the mark. And the casting is a large reason why. 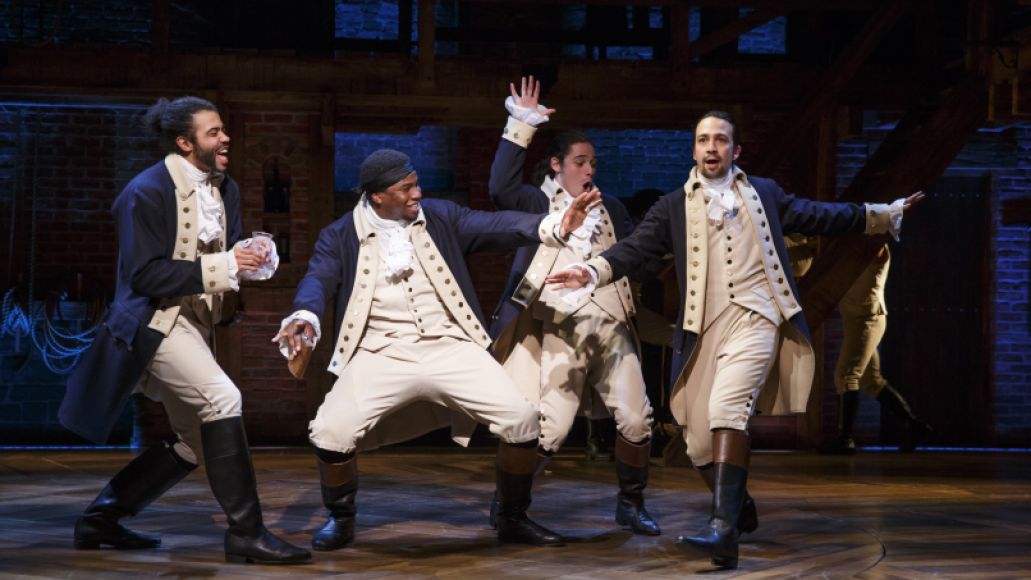 Having actors of color portray Alexander Hamilton, Thomas Jefferson, George Washington, and Aaron Burr (to name a few of the historical figures presented onstage) and speak to issues of freedom sends a message. It compels you, the viewer, to reconcile the fact that the words of the men credited with founding America weren’t matched by their deeds. Seeing a second-generation Puerto Rican immigrant play Alexander Hamilton or a first-generation Nigerian-American as James Madison is symbolic, a message that America exists and persists because of the efforts of oft-marginalized people striving to reach an American ideal that its leaders and founders failed to live up to themselves. Hamilton the real man is the protagonist of Hamilton, but the actual heroes are his ideals and passions as embodied by a skin that doesn’t receive enough recognition for possessing the same qualities attributed to historical icons.

Those figures are lionized in textbooks, and in the popular imagination are often sanitized, scrubbed clean of their personalities and misdeeds, and mythologized to the point of boredom. Hamilton skewers that presentation of American history and instead offers up something that’s vividly alive. Alexander Hamilton and his peers frequently act with great bravery and idealism, but they’re also hubristic, shallow, and conniving. The story possesses glorious moments of courage and inspiration, but is also rife with infidelities, blackmail, foreign meddling, and murder.

People and current events are messy and complicated. Through the use of talent that looks and speaks like the world in which we live in today, Hamilton shows that this isn’t particular to this moment in time. It reveals that the issues that drive us as a society today aren’t drastically different from who we were over 200 years ago. That is why Hamilton still matters, over four years and dozens of accolades later.

So if you have an opportunity, don’t throw away your shot. See it immediately.

Be sure to pick up your Hamilton tickets for this holiday season before they’re history. The show is currently on tour with dates scheduled all across the nation.