Slayer recently hit the big screen with the movie The Repentless Killogy, which pairs an exceptionally gory short film with footage of a full concert. Movie theaters across the world turned into metal parties for one night only in celebration of the thrash legends as they wrap up their farewell tour. It was a perfect time to honor the band’s legacy with a fitting visual spectacle, imbued with the themes and aesthetics of Slayer’s imagery and lyrical content (i.e. blood, guts, and Satan). It was the Killogy short film that stole the show at the premiere, a disgusting feast for the eyes set to the music of the thrash masters.

In an interview with Slayer that preludes the film, Kerry King credits director BJ McDonnell’s “vision” for finally giving the band the proper visual supplement they deserve, and Tom Araya says his highlight of the Repentless album cycle were the three music videos shot and written by McDonnell. They tell the story of an ex-Neo Nazi out for revenge against his old gang, and these videos were connected chronologically for the Killogy. McDonnell then brought back the original cast of the videos (Jason Trost, Danny Trejo, etc.) and new faces such as metalhead actress Jessica Pimentel, finishing the story where it left off.

The initial videos came about when McDonnell and Nuclear Blast label manager Gerardo Martinez teamed up for a more ambitious video project for the title track and lead single for Repentless. Instead of a standard performance clip — of which the band already has many to their name — McDonnell pitched a true Slayer video, one that represented what the band’s music stood for, and involved some actually slaying. Thus, the violent prison riot sequence was chosen for the first video.

“MTV and those other platforms are null and void now, and YouTube is a good platform where you can do brutal videos and not worry about censorship,” McDonnell tells Heavy Consequence. “That was the main reasoning behind the prison riot video; I wanted to make a video that said ‘Slayer’ with blood, guts, and high energy. Because when I listen to Slayer, that’s how it always grabs me.”

The “Repentless” video was strong enough that Martinez and McDonnell decided that they wanted to do a prequel and sequel to the prison riot, further expanding the narrative of the central character played by Trost. The next video for “You Against You” features fast-action gun violence in the vein of the John Wick series, and the third and final video for “Pride in Prejudice” fast-forwards in the story to a snowy scene where the protagonist is tragically scorned. 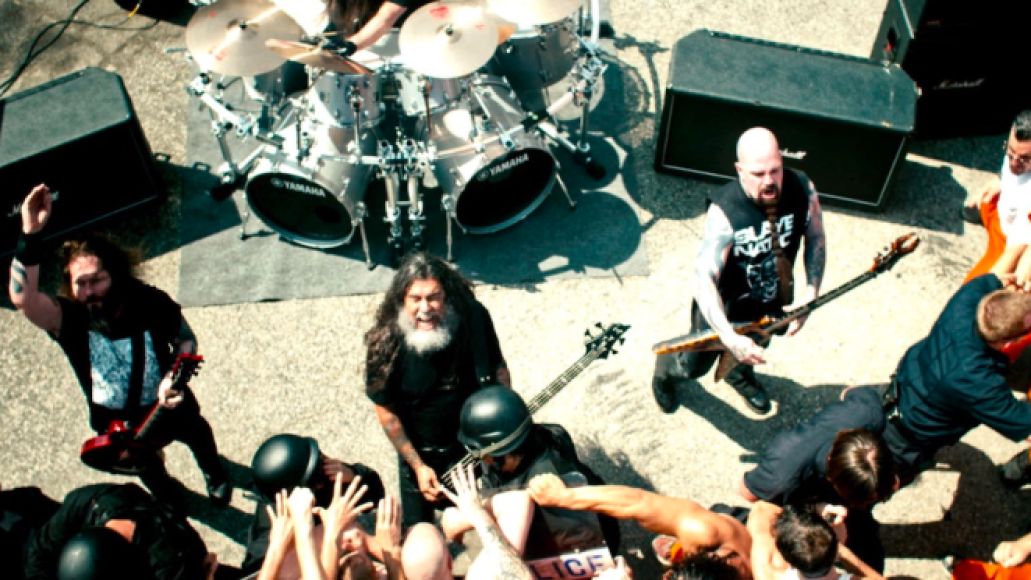 The latter sequence features a satisfying clip of Slayer performing in the snow with bloodstains coming from their amplifiers, because “nothing looks cooler than blood on snow,” according to McDonnell. Each narrative sequence was shot in a day or two; with the performance clips of Slayer filmed with the band themselves the day after. He had never worked with Slayer before the music videos, but the band was easily convinced by McDonnell’s aforementioned vision for the project.

“They were pumped to be a part of it, and happy to do it,” he says of Slayer. “I think they knew that we were trying to do something special, and later on, once we got the trust from the guys after doing the ‘Repentless’ video, we’re like, ‘We’re going to bring you guys out to the snow.’ I mean, how many people are going to ask a band to come out into the snow?”

The film release of the Killogy aligns the three videos chronologically (they were initially released out of order) and completes the story with a new batch of footage that prominently features Pimentel’s character. When the script was conceived a few years ago, McDonnell had planned to continue the storyline into music videos for Slayer’s follow-up to Repentless, expanding the backstory of Pimentel and Trejo’s characters. Those ideas were finalized and shot before Slayer announced that they were retiring in 2019. Thus, the Killogy ends on a bit of a cliffhanger, though McDonnell was ultimately satisfied with the ending despite not being able to further expand on his characters.

“We already shot all the footage and the next thing you know, we get a thing from Nuclear Blast: ‘Slayer’s final campaign,’ and we’re like, ‘Oh, crap,’” McDonnell explains. “All in all, it still works and we’re still happy with it. It just left everybody on kind of a cliffhanger situation.”

It was one of the inherent challenges with creating such an ambitious film project with limited time and budget. McDonnell explained that procuring simple props like retractable knives was expensive, and that executing the lavish amount of gore was a labor of love for his ragtag crew of effects specialists. One particularly difficult scene actually involved shooting during Slayer’s 2015 show at The Forum — the focus of the concert film that follows the Killogy. Pimentel is literally filmed amidst moshing Slayer fans, with McDonnell’s expensive Panavision cameras in danger of the fray. It’s a cinematic moment that Pimentel recalls fondly. 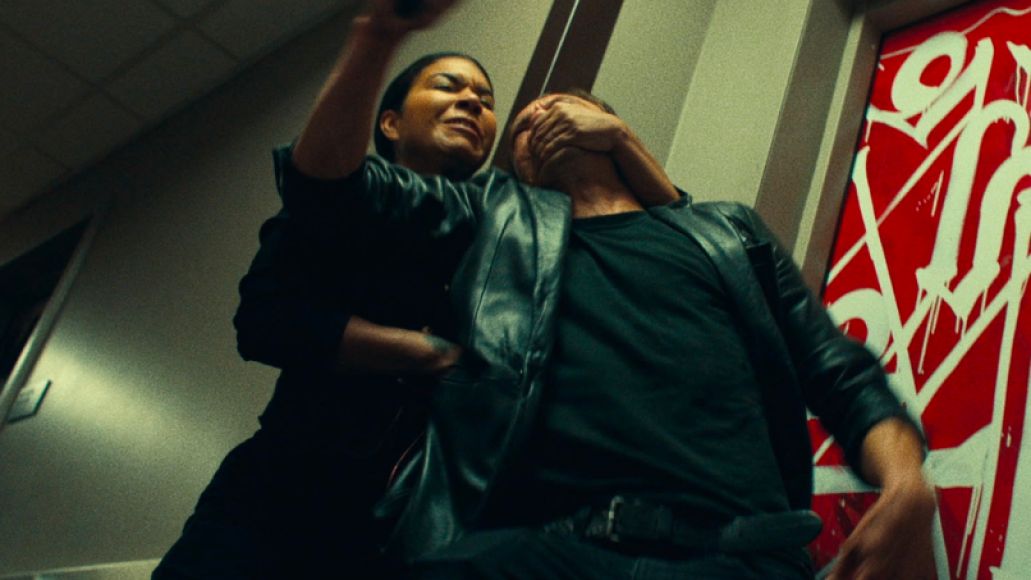 “I’m hoping some B-reel comes out in the future because I would say that was the singular coolest acting job I’ve ever done in my whole life,” Pimentel tells us. “There were times that I was in the pit dancing; I was grabbing people in the pit, punching people in the pit … and then biggest the pyro goes off. At that moment, I kind of left my body for a minute. I was like, ‘Is this real? Is this real life?’ It was probably one of the coolest moments in my life ever.”

Pimentel was an obvious choice for the role. The Orange Is the New Black actress has fronted the band Alekhine’s Gun and is a backing vocalist for Brujeria, plus she’s also in a relationship with renowned Meshuggah drummer Tomas Haake. So when Martinez brought up the idea of a “badass female character” for the final Killogy scenes, Pimentel joined the cast. It also helped that she’s a diehard Slayer fan. When recalling her first encounter with the band, she remembers a next-door neighbor giving her a “Spill the Blood” shirt before she knew who Slayer was.

“A couple years later, though, I would hear Reign in Blood for the first time, and I thought I was going to hell,” Pimentel recalls. “I thought the ground was going to open up and Satan was going to find me and eat me and kill me because I’d never heard anything so blatantly graphic and satanic. I was like, ‘Oh, that’s it, it’s over for me.’”

Ultimately, the most satisfying part of the Killogy is that it represents and visualizes that exact “graphic and satanic” element of Slayer’s music: “A commentary on the evil of men … a visual representation of what they’ve been thinking about and playing all these years,” as Pimentel plainly states. While it’s a bummer that McDonnell won’t be able to finalize the narrative plot and we only get a gruesome, fleeting moment with Pimentel’s character, the film stands as a fitting piece of gory horror worthy of Slayer’s canon.

“We never planned on it being a movie,” McDonnell remarks. “I was happy with what we ended up doing, and I’m happy that people enjoy the violence, the gore, the storyline … something visual to take away with them with the soundtrack of Slayer behind it — or leading it, actually. I just want people to be happy with what we did, sit back, have a shot of tequila, some popcorn, and enjoy.”

The Repentless Killogy is out now on Blu-Ray via Nuclear Blast.

Spill the Blood: The Making of Slayer's Repentless Killogy