The Pitch: Alex Levy’s (Jennifer Aniston) alarm goes off one morning at 3:30 a.m., her usual time. She goes through her routine—Red Bull while making coffee, under-eye patches and a jade roller, hair maintenance, pack bag, put the wedding ring back on, and out the door to her driver. But this morning, her phone won’t stop ringing. She doesn’t answer—avoidance, irritation, apathy, or some cocktail of the three keeps pushing her to ignore what’s obviously urgent. She pulls up outside the studio of her glossy, ratings-dominant morning show, and the caller (Mark Duplass) stands on the sidewalk. He’s got bad news: Her cohost of 15 years, Mitch Kessler, a cuddly mom-friendly teddy bear of a man (Steve Carell), has been fired for sexual misconduct. Then it all, as they say, goes sideways.

Around the time Alex goes on the air, things are also getting pretty nuts for Bradley Jackson (Reese Witherspoon), a charismatic correspondent for a West Virginia news station. While attempting to cover a protest at a coal mine, a counter-protester throws off her cameraman, leading to an altercation between Jackson and the assailant—one that’s caught on camera, and quickly goes viral. That moment in the spotlight grabs the attention of network bigwig Cory Ellison (Billy Crudup), who tosses Bradley into the middle of the network’s storm. It’s chaos, but as Ellison says in one of The Morning Show’s bewildering early episodes, “Chaos is the new cocaine.” 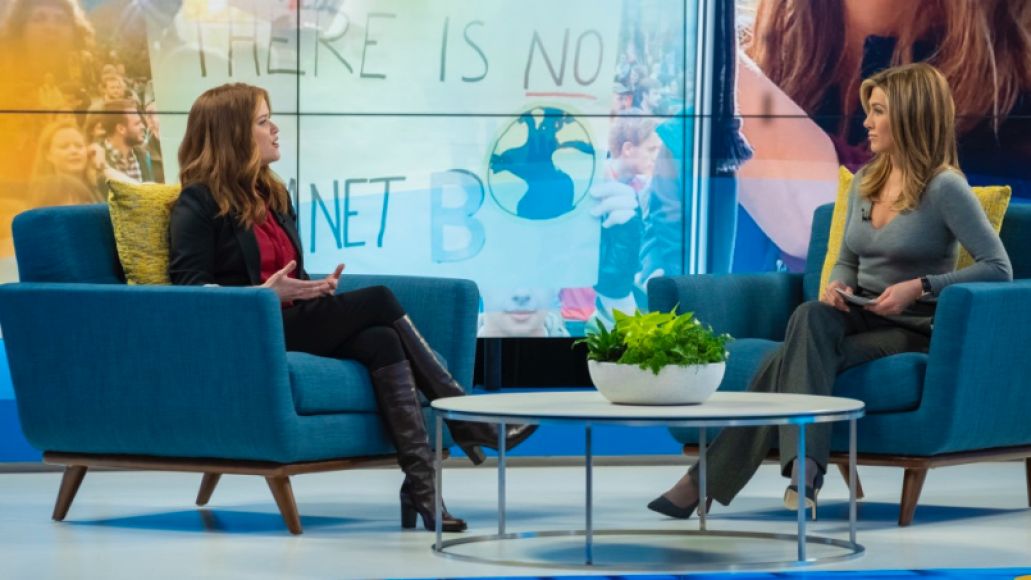 Look, Movie Stars! Apple proudly describes its service as “all originals”; you’ll find no Golden Girls or Happy Days here. The company is betting you’ll cough up for their new service and these new series all the same, and it’s safe to assume much of their confidence comes from the fact that they locked down Aniston, Witherspoon, Carell, Crudup, and Duplass—only five members of an almost uniformly excellent ensemble cast, but five (the first three in particular) who happen to have major name recognition and loads of star power. Seeing bona fide movie stars in series regular roles on television is no longer a total rarity—this isn’t even Witherspoon’s first this season—but their presence indicates a certain level of prestige and promises loads of charisma, if nothing else. Luckily, it’s not just charisma. Though the contradictory, tonally inconsistent scripting (more on that later) makes for some moments that are difficult for even these big shots to sell, there’s enough going on here to set most, though not all, of them up for serious success.

There’s not a scene in The Morning Show that Jennifer Aniston doesn’t seize with both hands and squeeze, like she’s determined to get every last possible drop of juice out of every orange she’s handed, no matter how underripe. In those hands, Alex is a brand, a performer, a carefully curated image; she’s also the person behind the mask, and that not so nice, not so collected person is in total chaos. Hers isn’t the only great performance on the show—Witherspoon is just as good, though Bradley, by virtue of her situation, doesn’t have quite as much to do. Crudup is the other standout, a kind of chaotic trickster god about whom only one thing can be trusted: his sheer enjoyment of the madness that surrounds him, and especially that which he creates. He’s magnetic. Duplass is also good, and amongst the supporting players, both Gugu Mbatha-Raw and Karen Pittman stand out each playing a Morning Show staffer whose burdens are heavy and growing heavier. Good acting: you’ll find it here. 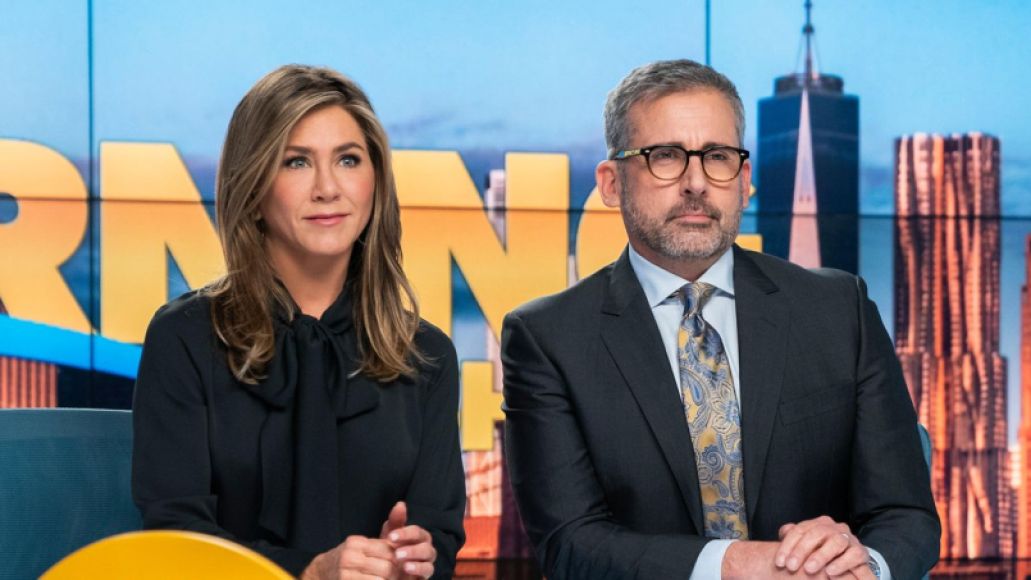 Actors Aren’t Superheroes: On the other hand, Steve Carell doesn’t fare particularly well. A great actor can gloss over or justify some lackluster writing, though not entirely, and Carell is certainly a great actor, but by and large, Mitch’s presence tends to reduce the complexity of any episode he enters. It’s clear that the opposite was intended, and every so often that’s what happens. The Morning Show functions best as an exploration of systemic failure and corruption, of how a group of well-meaning people can grow to view toxic, harmful, abusive behavior as just the way things are. It’s not always subtle about that—just wait for the flashback to the day the Harvey Weinstein story breaks—but at its best, it’s searing, demanding the viewer to question the things they’ve written off as somehow acceptable. (A late-arriving episode centered largely on Mbatha-Raw’s character is particularly hard to watch.)

Mitch throws all of that off-balance. The idea behind the casting is clear—Carell is the man whose inherent warmth made an acidic U.K. sitcom called The Office into something gentler, and as a not-at-all-thinly-veiled Matt Lauer figure, he’s supposed to be disarming, kindly, the kind of person who could never be a serial abuser. When he’s a ghost that haunts the hallways, that works. When he’s a person grappling with a world that’s shifting around him, it’s a mess: sometimes engaging, usually bewildering, often frustrating. (At one point he says, “First they came for the rapists…” and forgive the intrusion of the personal, but my soul left my body.) The character muddies the water, but not in an interesting way; Mitch is considerably less interesting than the rest of the show or the actor who plays him. There’s just too much, and it’s all nuclear-strength. Worst of all, the few Mitch scenes that feel vital and essential are just less effective because of all the rest. 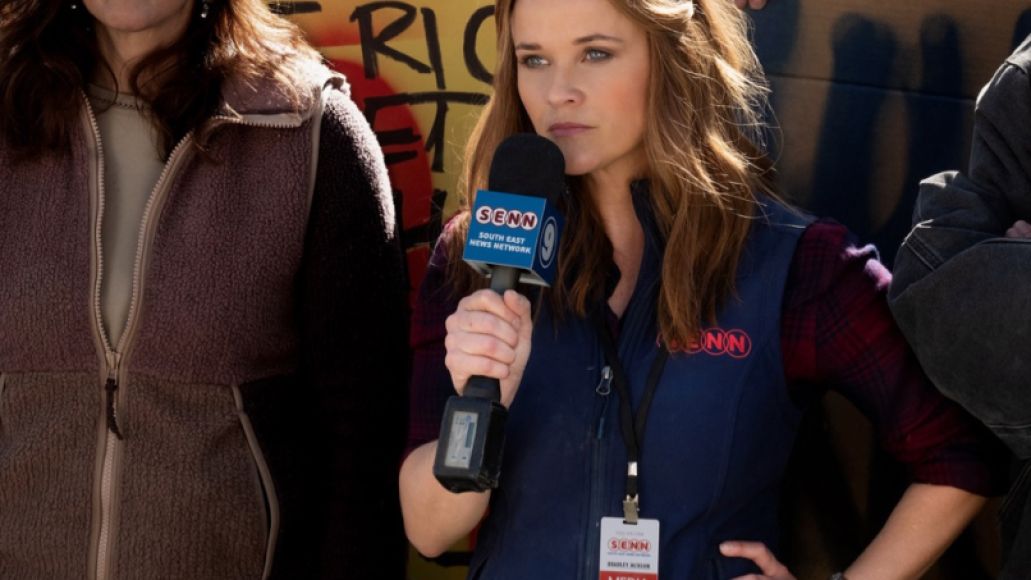 Let’s Roll: If the writing often stumbles, particularly where Mitch is concerned, it can also be fascinating, and showrunner Kerry Ehrin and her writers’ room rack up more hits than misses. But even when the story doesn’t work (and it gets really, really messy at various points throughout, from the chaotic pilot to the heavy-handed “ripped from the headlines” moments) it all looks great. Executive producer Mimi Leder (The Leftovers) leads a murderers’ row of directors, including Lynn Shelton (GLOW) and Michelle MacLaren (Breaking Bad). The episodes are typically expertly-paced and elegantly filmed, the glossiness of the on-camera world a sharp contrast to the darkness beyond the lights. Above all, these directors capture the staggering wealth of these characters—a level of excess that’s never filmed aspirationally. It baffles.

MacLaren and Leder do this especially well. These cars, apartments, bags, shoes, balconies, sofas, elegant meals—they’re all part of a trade these people made, a visible demonstration of the incentive to stay silent. Sure, there are too many walk-and-talks, but there’s also a sense of the camera as witness, capturing the expert lies the characters tell themselves, the moments of self-recrimination they can’t totally hide. 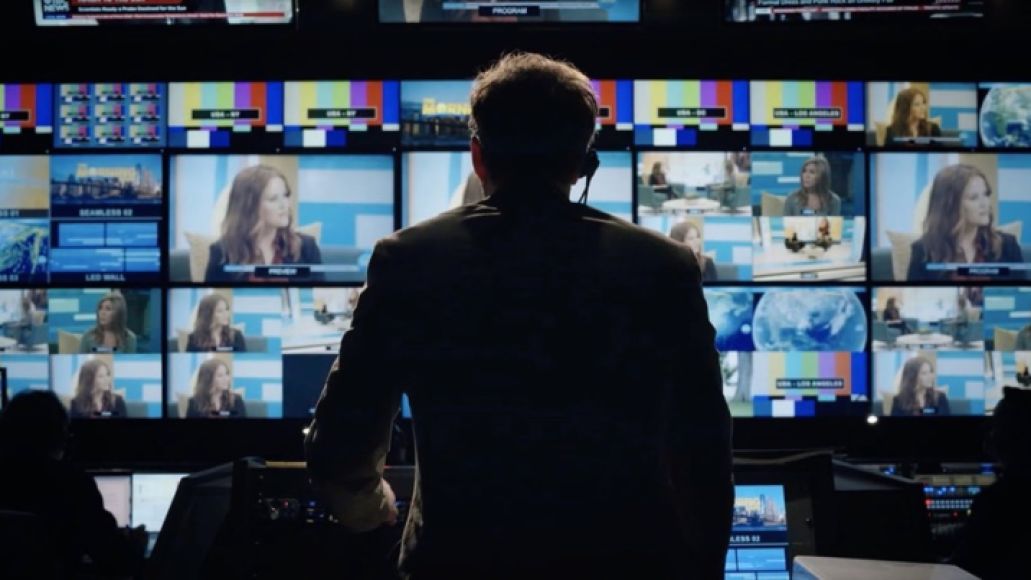 The Verdict: The Morning Show’s flaws are considerable, but they’re interesting flaws. It’s highly effective as a watchable, soapy drama, occasionally thrilling as a dissection of abuse in the workplace, and a top-tier showcase for a terrific ensemble of actors. It’s possible to imagine a version of this show that’s more sharp-toothed and less “timely”—something that baldly depicts the messiness of the world without veering quite so wildly between the didactic and the ridiculous. But that idealized show just doesn’t exist, just as the people Mitch and Alex pretend to be don’t really exist. But it’s worth pouring yourself a cup of coffee, putting on a cozy robe, and checking out The Morning Show.

Where’s It Playing? The Morning Show is currently streaming on Apple TV+.