Comedian Brian Posehn has recruited an all-star list of musicians for his first metal album, Grandpa Metal. The funny man has previewed the LP with a brutal cover of the A-ha hit “Take on Me”.

The towering comic teamed up with Anthrax’s Scott Ian, Fall Out Boy’s Joe Trohman, and Dethklok’s Brendon Small to create the album, which was produced by Jay Rustin. The 14-song tracklist features 12 original compositions, plus the A-ha cover and a rendition of the novelty dance song “The Fox (What Does the Fox Say?)” by Ylvis.

Among the guests on the album are Slipknot’s Corey Taylor and Steel Panther’s Michael Starr, who both contribute vocals to “The Fox (What Does the Fox Say?)”. Elsewhere, such musicians as Amon Amarth’s Johan Hegg, Slayer’s Gary Holt, Soundgarden’s Kim Thayil, Fall Out Boy’s Patrick Stump, “Weird Al” Yankovic, and others appear on the album.

“I honestly feel that every good song would be better if it were heavy metal,” said Posehn in a press release, “and I think I proved my case with ‘Take on Me’. It’s such a catchy song, it’s so cool, but I always thought if it had three guitars instead of a keyboard, it would be even cooler.”

As for the full album, Posehn explained, “I wanted this to be the ultimate comedy/metal record, a loving record that made fun of some of the things in heavy metal, so I called all my friends and asked for a bunch of favors.”

Posehn is best known for playing awkward characters in such films and TV shows as The Sarah Silverman Project, Big Bang Theory, The Devil’s Rejects, and Mr. Show with Bob and David. He recently appeared in the pilot episode of the new Disney+ series The Mandalorian.

In summing up the album, Pohsen declared, “It’s the Chinese Democracy of comedy-metal records.  And it didn’t cost 13 million dollars to make.”

Grandpa Metal arrives on February 14th via Megaforce Records, with preorders currently available. Listen to “Take on Me” and see the full tracklist (with credits) below. 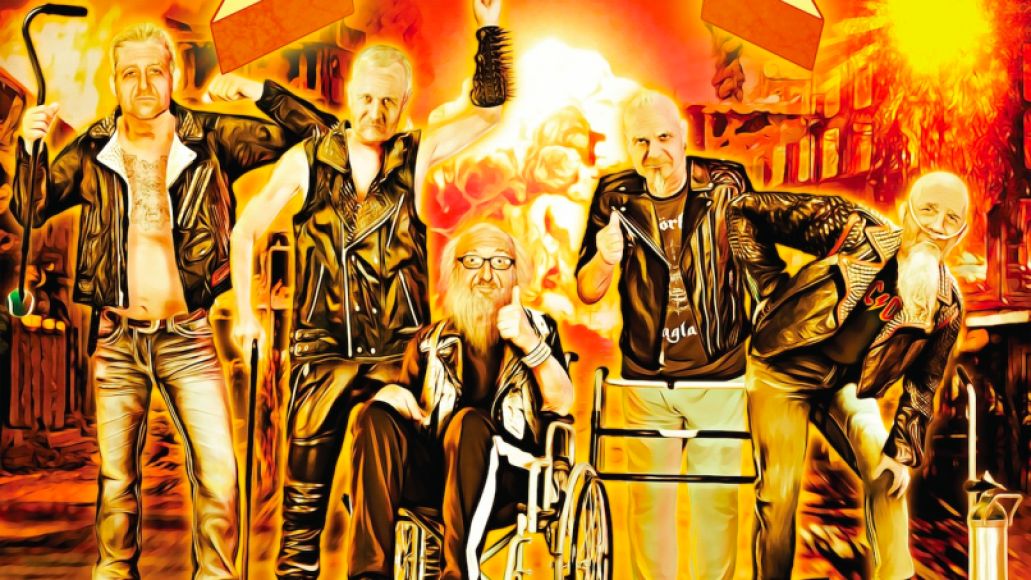