This review originally ran in November.

The Pitch: Two British foot soldiers are selected for a last-minute, solo mission. They need to make a day’s long trek across no man’s land to warn 1,600 fellow soldiers about a pending German trap that will wipe out everyone by dawn. Based on the war stories told to director Sam Mendes by his grandfather, this forward-marching race against time is exponentially bolstered by the technical complexity of presenting the tale in one long-shot.

Down to Gehenna or Up to the Throne, He Travels the Fastest Who Travels Alone: The film starts at ease in a wildflower field, lingering on Dean-Charles Chapman and fellow soldier George MacKay as they’re roused from sleep. Within seconds, the world opens as the two men plod toward their General (Colin Firth) for proper instructions about a key mission. It’s here the sheer technical challenges of 1917 present themselves.

Challenge is an understatement. Right from the get-go, Mendes and Academy Award-winning director of photography Roger Deakins alternate between front and follow shots as our two protagonists pass scores of muddied soldiers, makeshift bunks, and smokey encampments on their way toward the front. As it weaves around, the camera ably informs the audience of the unfurling stakes on screen. 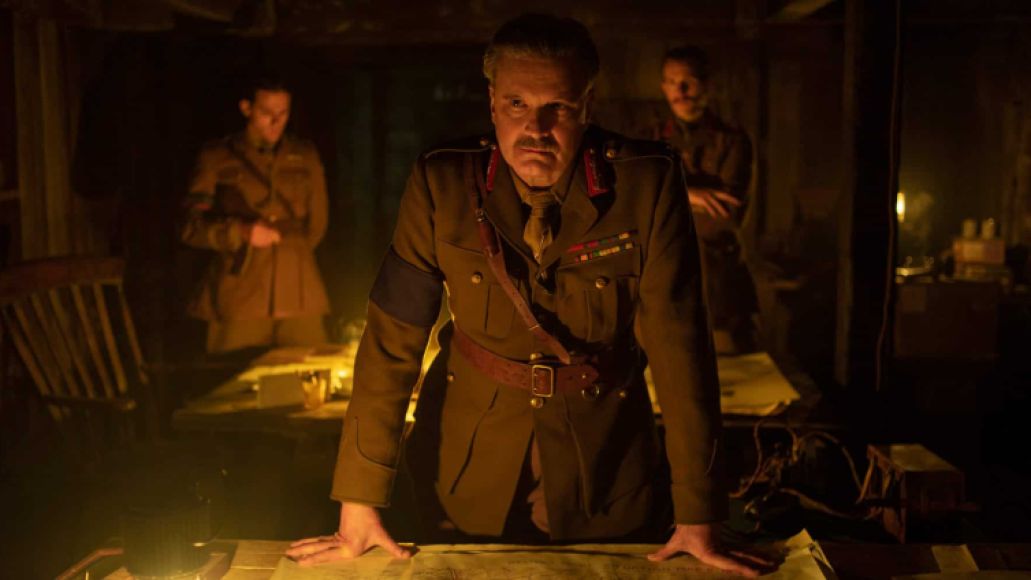 There’s a rhythm and flow to the proceedings. All too often, the lens is trained in on close-ups as enlisted men exchange barbs and complaints. Elsewhere, it stiffens and marches formally when in the presence of commanding officers. Gamers might recognize this effect from the auto-pilot sequences laced within Medal of Honor or Call of Duty titles, but seeing it executed in reality is a sight to behold.

That sight is certainly magnified by the production values. As our two protagonists shoulder their way deeper and further into this ever-expanding Dantesque warzone, the number of extras expands into the hundreds with more and more wounded and hardened fighters blanketing the chaotic edge of no man’s land. These evolving landscapes only aide in creating a firm sense of location, especially amidst the chaos.

All the while, Deakins’ jaw-dissolving cinematography opens up every new terrain with orbital camera movements that ration out just enough to tease the endless hurdles and enemies awaiting Chapman and MacKay. 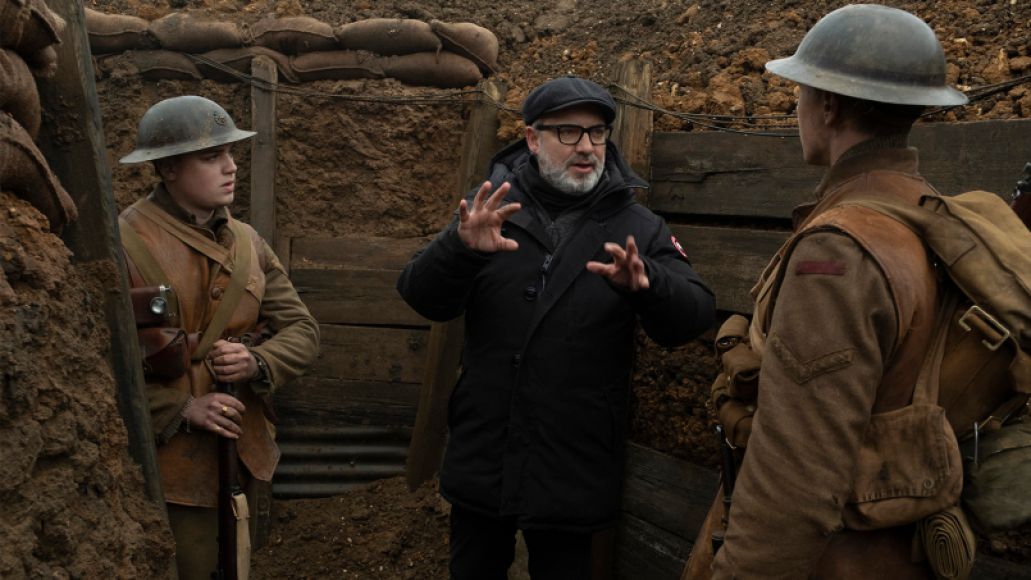 A Brief Armistice: A keen-eyed viewer will notice passing shadows or objects that camouflage the edits and stitch the action together, allowing Deakins and Mendes to pull off the “one long shot.” But the immersion into this tormented world and the ever-present tension of 1917’s beat-the-clock pacing keeps the audience as firmly entrenched in the mission as the soldiers fighting within the very bowels of Earth.

For the most part, Mendes’ debut screenplay works a lot like a ballet — minimal albeit quite technical — urging the story’s movements to naturally speak for itself. Even so, 1917 affords itself purgatorial respites from hell, retreating into the ruins with momentary ceasefires that allow both the narrative and the audience to release some of the accumulated pressure.

The sharpest of these breathers occurs in the basement of a bombed-out French cityscape that truly depicts Hades. It’s a gasp, admittedly, but Mendes reads the room, allowing MacKay to rest his legs and flex his other muscles before composer Thomas Newman creeps in to remind everyone of the dangers that linger outside the crumbling walls.

The Great War: The bloodletting in 1917 is extreme, but never gratuitous. In fact, it’s rather accurate. At the time, Pandora’s war chest had been cracked wide open all across Europe: the invention of machine guns, nerve gas, and other new types of weapons unleashed major, devastating changes in the ways humans engaged in murderous combat.

Like All Quiet on the Western Front author Erich Maria Remarque or frontline poet Wilfred Owen before him, Mendes recognizes this then-unique modernity as he explained in a recent Making Of featurette: “The first World War starts with literally horses and carriages, and [it] ends with tanks. It’s the moment where modern war … begins.”

The set design itself serves as an extended metaphor of this idea. As our heroes crawl forward across no man’s land, they first navigate between rotted dead men and fly-covered horse carcasses, all of which have littered battlefields for thousands of years. Gradually, though, they skulk past broken-down, mud-bogged tanks, tangled in barbed wire on city streets littered with shells.

Chapman and MacKay observe these wreckages with a combination of wonder and fear, before scurrying like rats into a crater to hide from the fixed-wing aircraft that zoom overhead like mechanical vultures. Again, this is a type of war that was as merciless as it was unprecedented, so it’s only appropriate that Mendes and Deakins present it with the same kind of astonishing grandeur — and they do. 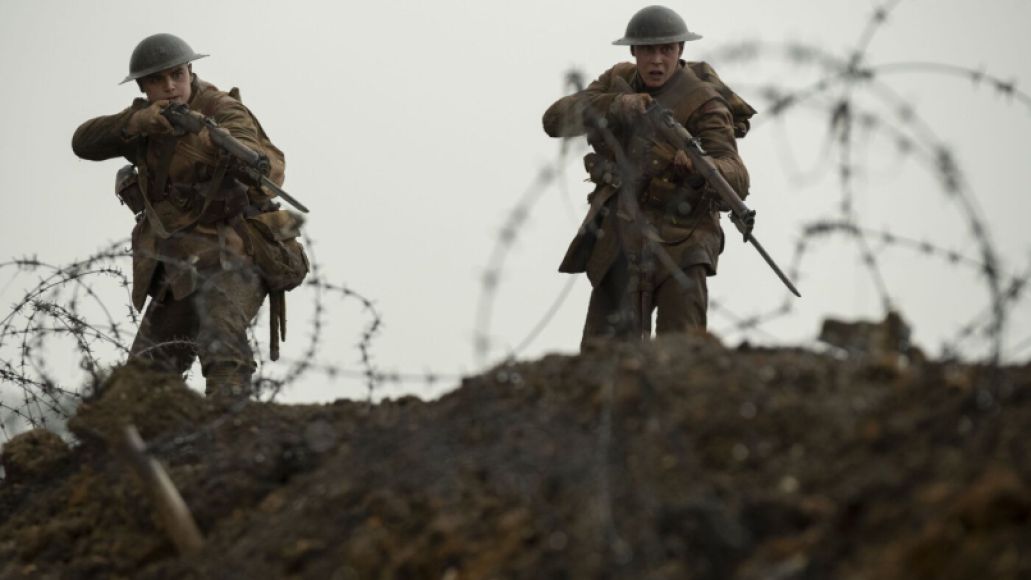 The Verdict: Something’s happening to the war film. Not since Steven Spielberg and Terrence Malick’s respective World War II epics has the genre undergone such a re-evaluation from A-list filmmakers. Yet that’s exactly what’s going down: Because much like Christopher Nolan’s riveting World War II drama Dunkirk, Mendes has also painted a portrait of warfare that similarly feels cut from a new canvas.

Yet where Nolan leaned more on escalation, weaving arcs and threads together through time, Mendes revels in the imperativeness of war, never missing a single footstep as he traces its unforgiving warpath. In that respect, the long-shot is hardly a novelty — as it so often tends to be wielded in Hollywood — but a point of view — a feeling even. And rarely, if ever, has that style been so affecting and executed so beautifully.

At its core, 1917 gives credence to the war film at a time when it’s become so stale and predictable (see: Midway). In a way, there’s a fitting parallel to be made here between the film and its source material: A century ago, World War I propelled history into an unseen state-of-the-art era of warfare, and now, 1917 closes out this current decade as a masterpiece that will thrust the genre into a brave new era.

Where’s It Playing? The war unfolds on Christmas Day.

Film Review: 1917 Reimagines the War Epic for the 21st Century