The Pitch: Cats has finally made it to the big screen, and at this time, we’d like to remind you that this is an adaptation of one of the most profitable and long-tenured musicals ever staged. Whether you’ve seen a performance of Andrew Lloyd Webber’s renowned show or picked up on it through pop cultural osmosis, you most likely know of Cats; whether you know much about what actually happens throughout Cats may be a different story.

One night in London, Victoria (ballerina and cinematic newcomer Francesca Hayward) is thrown in the trash by her previous owner. There she discovers the Jellicle Cats, who on the particular night in question are preparing for the Jellicle Ball, a celebration which ends in one of their number being selected as the Jellicle Choice and being sent to the Heaviside Layer (cat heaven, essentially) to begin a new life. As Victoria is taught the ways of the Jellicle Cats, she discovers the vibrant world beneath our own, one where cats dine and steal and experience profound joy and heartbreak alike. Most of all, they sing and they dance.

There are magical cats and nefarious cats, innocent cats and lusty cats. Some are thieves or layabouts. One works on the railroad while moonlighting as an adept tap dancer, another as a grizzled barge captain. There’s an evil and magical cat, Macavity (Idris Elba), who threatens to hijack the Jellicle Ball and force his way to the Heaviside Layer by tempting the Jellicles with their deepest desires. But it’s only Old Deuteronomy (Judi Dench), the eldest of the Jellicle Cats, who gets to make the Jellicle Choice. 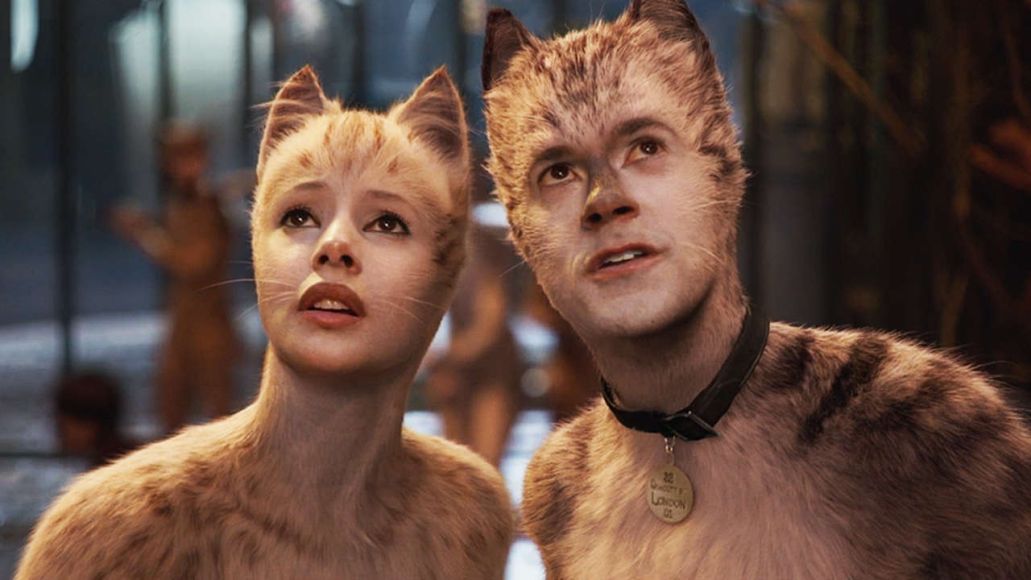 Out of the Bag: To watch Cats in its original form is to be yanked into a fever dream of painted Lycra and elaborate stage makeup. To watch Cats in this specific form is something else entirely, and that’s not only because of the most obvious reason, the reason that few have been able to stop talking about ever since the first images and footage of Tom Hooper’s adaptation emerged. We’ll get to that momentarily.

As staged by Hooper, who previously tackled another classic stage musical from the ‘80s with Les Misérables, Cats makes for a bizarre marriage of cutting-edge technology with a musical that sounds and feels entirely like a production from its time. Aside from the flash of the film’s visual approach, he doesn’t elect to make all that many changes to the source material, save for the addition of Victoria as a character, one new song (“Beautiful Ghosts”, a solo feature for Victoria), and a handful of short transitional scenes between Macavity and the other Jellicles.

Hooper’s most engaging decision is to retain Lloyd Webber’s original instrumental arrangements, which layer squelching ‘80s synths and bombastic, back-of-the-house strings over the film’s playful tandem numbers and soaring ballads. It’s a touch that honors the source material even as the film around it draws attention to its own hyper-modern artifice at every turn. It also preserves the music that’s continued to appeal to audiences for years, music which still has its moments of appeal even after all this time. There may be a lot about Cats that doesn’t work, but when Grizabella the Glamour Cat (Jennifer Hudson) finally breaks into “Memory”, it still takes flight as a ballad for the ages. 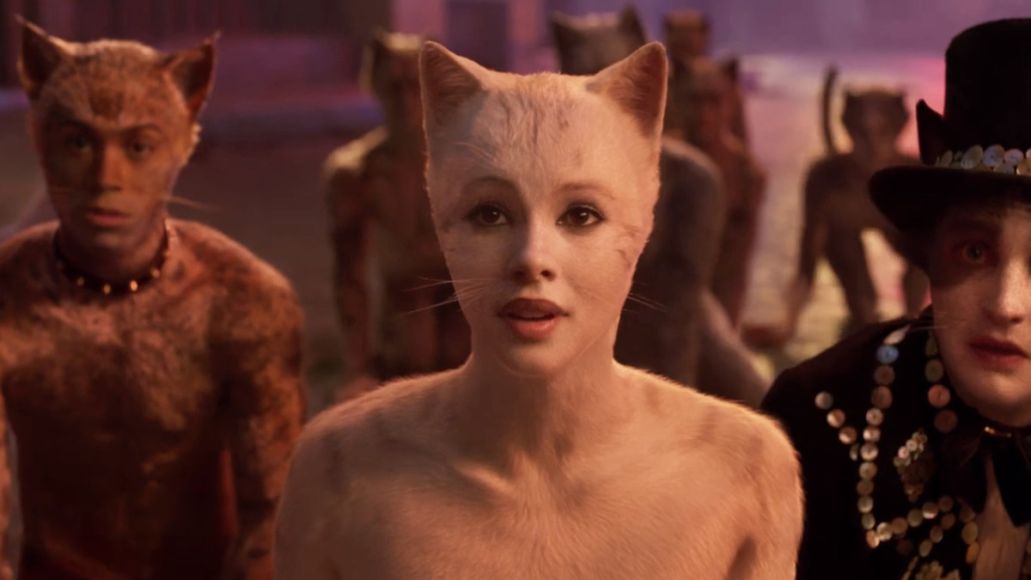 Those Darn Cats: In adapting Cats, Hooper and co-screenwriter Lee Hall had the unenviable task of turning a show without much of a plot into a movie without much of a plot. Yes, Cats is about a group of cats preparing for an annual celebration, but much is otherwise left unexplained, like why the cats are wildly excited about one of their number being sent to death. Most of the songs function as expository monologues, with each cat being introduced by whichever trait their song is about and then promptly disappearing back into the ensemble once finished. This patchwork quality creates a general sense of tonal anarchy, with poignant meditations on death butting directly up against bouncing odes to magic-loving cats. They sing, they tap dance, and sometimes they even thrust lasciviously, but the cats of Cats are too often lost in the shuffle within a few minutes of their respective showcase numbers. When those numbers constitute the whole of the story, the film is left feeling unmoored for far too many of its 102 minutes.

Some of the performers nevertheless distinguish themselves, particularly Hudson; the Oscar winner is an effective emotional anchor for a film which chiefly positions itself as a flight of fancy. While Hooper’s presentation choices lend some degree of absurdity to every actor’s work here, some lean even further into the madness, from a gnawing-on-the-scenery Elba to a milk-lapping Ian McKellen as Gus, the Theatre Cat. Those who seem to understand the nature of Hooper’s rendition fare best, although every actor onscreen is tasked with fighting an uphill battle. Which leads us to…

The Part of the Review About the CGI Cats: Without the computer animation, Cats would be an agreeable if ultimately tepid adaptation of a musical that musical theatre enthusiasts are still arguing over to this day. The songs are about what each cat does and feels, save for a fourth wall-breaking number about how to properly demonstrate respect to one’s own cat. The opening company number, “Jellicle Songs for Jellicle Cats”, exists to repeat the words “Jellicle” and “cat” until they and then the English language have lost all meaning. The more rotund cats eat a lot and fall over sometimes. To paraphrase The Irishman, it is what it is.

With it, Cats is the most audacious endeavor of Tom Hooper’s career, and that’s no compliment. It’s an absolutely galling use of studio resources in service of a series of deranged production design choices that may leave you questioning whether the human experiment has been worth it. By compositing his stars onto the bodies of humanoid cats, Hooper ensures both that his film will live forever in the annals of surrealist memes, and that many viewers will spend far more time wondering why the cats have human hands with fingernails than actually paying attention to the film. That last aspect is the great failure of Cats: Hooper seeks to bring something new to the classic musical, and instead winds up building an expensive and unsettling distraction on top of it.

By casting recognizable performers in most of the key roles, and attempting to keep them as recognizable as possible, Cats draws direct and aggressive attention to its most risible traits. It’s not enough that Rum Tum Tugger gazes at his backup dancers with lust in his eyes, it’s Jason Derulo as a giant cat pelvic thrusting his way through an introduction. For as admittedly great as Hudson’s vocal work is, she’s done a total disservice by having to deliver the musical’s most legendary piece through the tearful eyes of a Cronenbergian atrocity. As the film unspools, the unintentional surrealist hilarity of the gimmick gives way to an overwhelming sense of disappointment as its actors are buried under a top-shelf misfire of an idea, one by one, until it’s over. It’s going to inspire strong reactions in audiences, but not at all in the way the filmmakers surely intended. 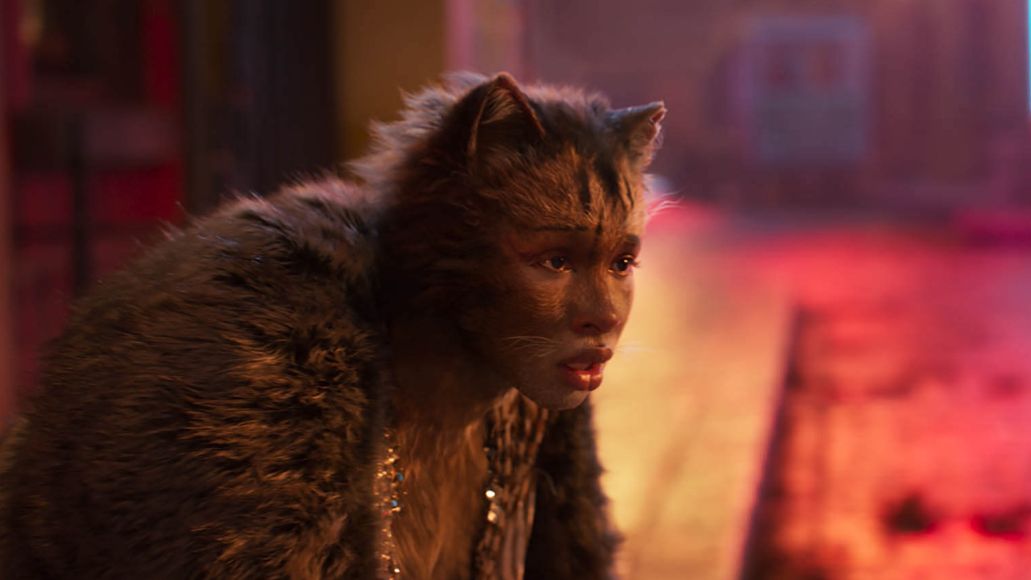 The Verdict: The ground beneath a movie version of Cats has now been so thoroughly salted that it’s a shame we’ll never get to see how a Julie Taymor-esque makeup-and-costuming rendition of the material might have played in theaters. The skintight bodysuits of the Broadway show’s heyday might have been laughed out of modern theaters (though that’s hardly a guarantee, especially compared to what Hooper yields here), but there were ways to modernize Cats that wouldn’t involve turning a popular and beloved show into a future punchline.

As an adaptation, Cats is declawed, never delving fully into the possibilities offered by its proportion-manipulating trick photography and its animated cast. As a big-budget spectacle, it’s a triumphant disaster, if one at least born from a unique idea. And as an ostensibly crowd-pleasing musical for the whole family, just in time for the holidays, Cats will fill heads not with visions of dancing sugarplums, but of a shapely cat with Taylor Swift’s face drugging a room full of felines into a fevered, near-orgasmic reverie.