Setting the Stage: On a frigid night in late December, the warehouse confines of Brooklyn Steel became a place of refuge for a smattering of indie kids, punk thrashers, and grizzled post-hardcore heads. The co-headlining bill of Daughters and HEALTH — along with a choice support slot from rising Brooklyn terrors Show Me the Body — brought out a diverse crowd of curious parties, pushing the venue to its capacity. The show came on the final days of the third leg of Daughters’ lengthy tour in support of 2018’s You Won’t Get What You Want, and the road had taken a physical toll on the band and frontman Alexis Marshall.

Taking the Stage: Show Me the Body opened the night with a raucous set, inciting the dangerous mosh pit that often accompanies their shows in Brooklyn. The three piece plays a concoction of unhinged noise rock that incorporates elements of sludge metal, hardcore punk, and industrial hip-hop à la Death Grips, giving their set an unpredictable element of chaos. Frontman Julian Cashwan Pratt played an electric banjo through a fuzz distortion, occasionally dropping the instrument to barrel across the stage, jump in the crowd, or step aside for a guest vocalist. Songs with wavy trap beats were followed by breakneck punk that sounded like Big Black playing speed metal. The swirl of bludgeoning bodies in the pit was fitting visual accompaniment.

A more tempered audience enjoyed the following set by heavy electro trio HEALTH, though the performance was no less abrasive. Their crushing programmed beats are too sporadic to lend themselves to moshing, instead hitting at a brutal volume that makes full use the venue’s subwoofers. Combined with intense strobe lights, the band created an impressive wall of stimulation that became demanding on the senses over the duration of the 16-song set, which spanned the band’s career including 2019’s Vol. 4 :: Slaves of Fear. The crowd was in for another drastic shift in mood upon Daughters’ arrival to the stage.

Daughters are on the third leg of a seemingly never-ending tour in support of You Won’t Get What You Want, slowly graduating up the venue scale with each run of dates. Their 2018 show in Brooklyn was at the intimate and sadly defunct Brooklyn Bazaar, and then they played Warsaw back in March. To accommodate for their rapidly growing fanbase, the band’s played a bigger room each time, symbolic of their success following the widespread acclaim of You Won’t Get What You Want. However, with that success comes life of the road, enduring repetition, apathy, and in the case of frontman Alexis Marshall, physical health concerns.

Never one to shy from sharing personal sentiments on social media, Marshall made a poignant post on Instagram earlier in the week offering an update on his status as the tour trudged onward: “Playing through some injuries; serious, but not life threatening. I have promised someone very important I will be careful, to ensure said injuries do not become permanent and life altering. It is difficult for me to accept my mortality while onstage — adrenaline is not a permanent state. Please forgive me these remaining dates for a reserved performance. I am just a man.” An earlier post showed an X-ray scan, ostensibly of a neck or head injury with the caption, “Suffer for love.”

Marshall is an expressive and transparent artist, and Daughters’ live performance goes as he goes. His demeanor during Thursday’s show was obviously restrained compared to the rowdy charisma of the Warsaw gig back in March. His signature mic twirling was at a minimum, his onstage contortions subdued, and his words to the audience reduced to a handful of pat one-liners. Every song ended with the same jarring thud of the mic falling from his hand and hitting the stage, as if Marshall could hold it no longer. He would then pace to the shadows in the corner, summoning the strength to continue through the same set he’s been performing for the past year. It became an ominous routine, much like the tour itself, encapsulating the grind of the road and the repetitions of everyday life (the source material for You Won’t Get What You Want).

The singer’s vocal delivery verged on blunt spoken word at times, with the live mix putting him above the instrumentation. “City Song” became a misanthropic drawl, and the young crowd that violently moshed earlier stood transfixed as Marshall held the entire warehouse in a stark display of honesty. With his physical movements reduced, Marshall’s poet side took over, his words like daggers over the eerie soundscapes of “Satan in the Wait” and “Long Road, No Turns”. His sudden and violent axe slam of the mic stand during the breakdown seemed more out of frustration than concert theatrics. He tossed the broken stand to the side in disgust.

Daughters had toured themselves to point of complete emotional transparency. Drained, fatigued, and injured, their performance became as direct and cathartic as the songs themselves. Closing with “Ocean Song”, Marshall stood alone as he sang the refrain: “To know, to see for himself/ If there is an ocean beyond the waves, beyond the waves.” He repeated the words into one mic, and then inserted another into mouth, exhaling to mimic the crashing of the tide. He then dropped both in a final gesture of exhaustion. “One more night in this coffin,” he wrote the next day. “Been a tough run. Thank you for your patience and support.”

Photo Gallery – Daughters, Health, and Show Me the Body at Brooklyn Steel (click to enlarge and scroll through): 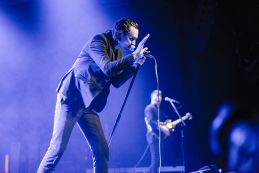 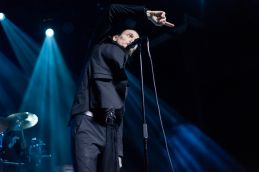 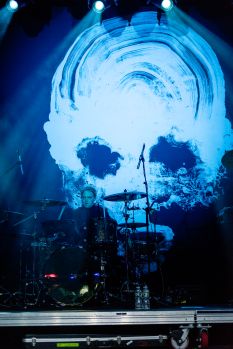 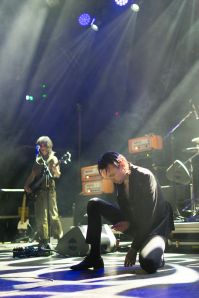 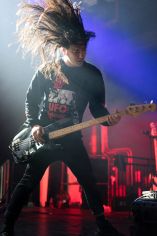 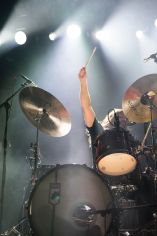 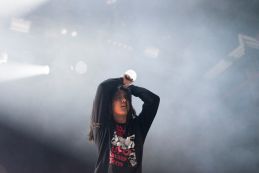 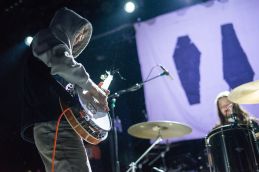 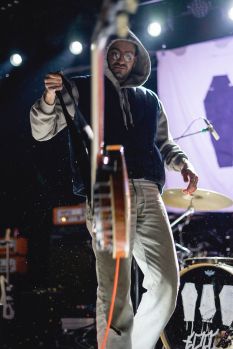 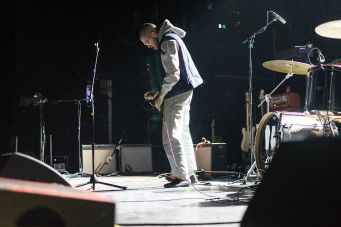 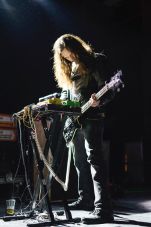 All photos by Jon Hadusek

Daughters Setlist:
The Reason They Hate Me
The Lords Song
City Song
Long Road, No Turns
Our Queens (One Is Many, Many Are One)
Satan in the Wait
The Hit
The Virgin
Less Sex
Guest House
Daughter
Ocean Song