Top Episodes is a feature in which we handpick the definitive best episodes of a groundbreaking, beloved, or otherwise awesome television series. This article originally ran in 2017 and has been updated.

In December 1997, I threw up on Jason Alexander.

Well, maybe it was at his feet — the jury’s still out.

Alexander, then about to enter his final season portraying the neurotic and quick-tempered George Costanza, was enjoying a pleasant breakfast buffet in Maui. Almost seven years old and raised in a household where Seinfeld was routinely on TV, I had seen him around the resort for a few days, always too nervous to say anything. On my last morning before flying back home, my parents pushed me to approach his table; who could say no to an (allegedly) cute first grader?

But something happened on the short walk across the restaurant — my stomach started to churn, later giving way to the flu. When I opened my mouth to speak, only vomit came out.

Since the last season of Seinfeld had likely been written at this point, I’ve long been curious why this incident never made it into Curb Your Enthusiasm, Larry David’s LA-based comedic tour de force, assuming Alexander told his producer and co-stars about the episode. But on second thought, it makes sense my story was never a random side plot — it wasn’t petty enough.

David, the real life version of George Costanza, complains and argues his way through dinner parties, frozen yogurt lines, celebrity birthday parties, memorial services, and virtually everywhere in Los Angeles, Manhattan, and at one point, a Parisian parking lot. Over the course of eight seasons, David and his friends with extremely high tolerances for bullshit float in and out of some of the most awkward and cringeworthy situations ever put on the small screen.

Of course David couldn’t have included a story about a kid puking up breakfast at his feet, because he first had to fight back against stop and chatters, teach a girl scout how to use a tampon, fire a chef for wearing a toupee, and argue with David Schwimmer’s father about the ratio of cashews to raisins in a trail mix package.

As our favorite bald respecter of wood returns this week, we decided to revisit our favorite Curb episodes, chock full of hair-raising awkwardness and some of the funniest one-liners in TV history.

And almost 20 years later, if by any chance you’re reading this Jason, I’m sorry. 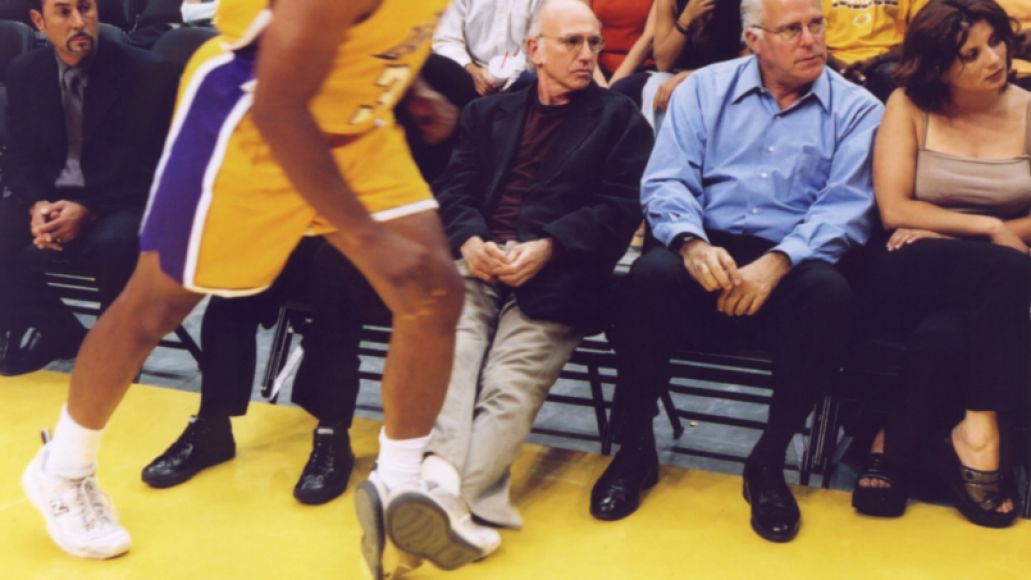 Are You Crazy? (Larry’s Big Issue) “Breaking news: death’s less important when the Lakers lose,” Earl Sweatshirt raps on Doris single “Hive,” a play on how important the Lakers are to the city of Los Angeles (at least when they’re good). Larry and Richard Lewis get Jeff’s courtside seats for the opening game of the season, right next to the Lakers bench. When Shaq runs to the scorers table to get subbed back in, Larry stretches out his legs, tripping the Lakers’ star player, knocking him out of the game. Everyone in Los Angeles hates Larry, even yelling at him on the street, but unexpectedly, everything starts going his way.

“Get the Fuck Outta My House, Larry!” (Susie Quote) One of the few episodes where Susie doesn’t appear, the best insult comes from Jeff, obviously furious after he loses his hard-won Lakers season tickets. “What the fuck, what the fuck?” he screams at Larry as he runs into him across the street. “What can I do? Can I do anything?” a defeated Larry asks. “Buy the team!” Jeff responds.

Vanilla Bullshit Things (The Best LD Observation): “Can someone tell me what they did to the bottom of the broccoli?” Larry complains to deaf ears at dinner in the episode’s opening scene. “Is there one person at this table that can eat cauliflower?” he continues, though the other five people at dinner, Cheryl included, completely ignore his whining.

He’s Not My Best Friend! (Hilarious Moment Involving Someone in Larry’s Circle) Surprisingly, most of Larry’s inner circle is absent for this episode, with Jeff only appearing in a couple scenes and Cheryl and Richard taking a sort of backseat to the general plot. The best moment involving any of the major characters comes in the form of Cheryl’s disapproving looks when Larry decides to buy the entire coffee shop whatever they wanted. “This new Larry is too enthusiastic. I miss the old Larry!” she complains.

Stop and Chat (This Episode’s Guest Star): By 2001, Shaquille O’Neal was coming off of a championship season and was the biggest star in his sport, so this was a huge get for the show. But as we all know now, Shaq is a hilarious personality, which showed throughout this episode. “The whole world knows that peanut butter is a dairy product,” he proclaims while playing Scattergories with perfect deadpan. Though he’s only on screen for maybe 25% of the episode, Shaq steals the show, as he nearly always does.

Socially Assassinated (Who Gets Fucked Over): The Lakers team doctor, Craig Wiggins (Joel McKinnon Miller), at Shaq’s hospital bedside following the injury, cheated at Scattergories, adding a couple extra words to his list after the timer ran out. Larry caught the doctor fudging the score and when Wiggins went to the bathroom, he told the star player about it, resulting in Shaq firing his doctor.

Get In That Ass (Best Advice Given): “Aren’t you going to say goodbye?” is the episode’s mantra, repeated multiple times as Larry fails to say goodbye or good night when he leaves social situations. It’s not the best or most pointed advice out of the show’s history, but it hilariously gets recalled towards the end when Cheryl’s parents decide to fly home early so they could “leave you with your chaos.”

Pretty, Pretty, Pretty Good (Analysis): “I get so much satisfaction out of seeing 19,000 people disappointed when they lose,” Larry says at the beginning of the episode (though he may not enjoy it when his team wins either). But his pleasure at seeing disappointment works out much better than he could have imagined — he gets out of having to write a letter of recommendation for an acquaintance and doesn’t have to make a page in a birthday book. For once, his being hated by everyone actually benefits him, flipping the script of how Larry’s usual interactions generally go. 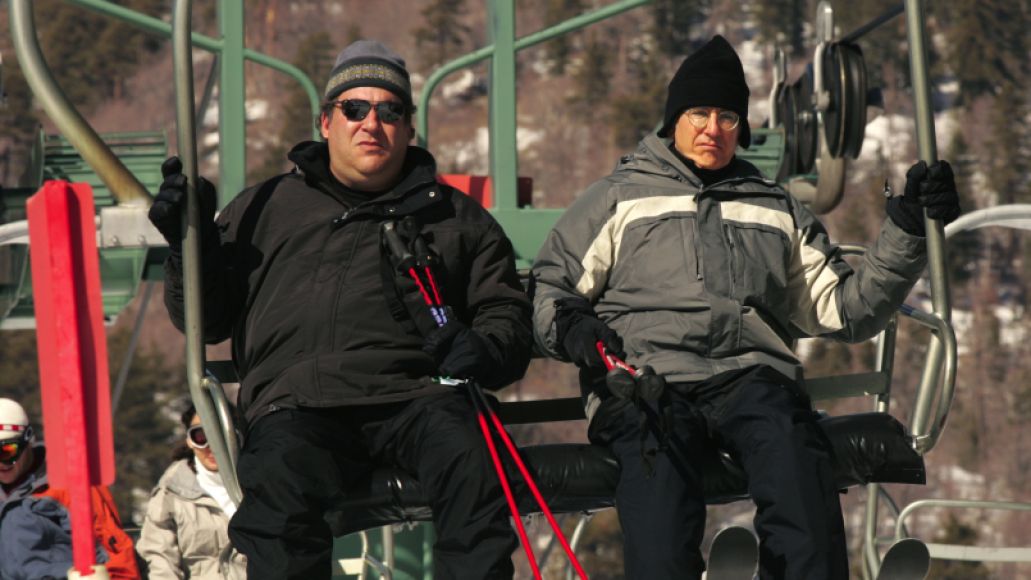 Are You Crazy? While the preceding episodes don’t conceal it, “The Ski Lift” confirms one thing: there are no depths that Larry won’t sink to in order to avoid taking the kidney test to see if he’s a match for his bedridden friend, Richard Lewis. When he and Jeff are exposed for hoping Lewis’ comatose cousin Louis Lewis quietly passes on — thereby possibly giving Richard one of his kidneys — plan B is characteristically ambitious.

After discovering the head of the kidney consortium, Ben Heineman, is prone to helping out “friends,” Larry invites him and his daughter on a ski trip in the hopes of bumping Lewis up. How Larry gets to that point (and the way he conspires to convince the Orthodox Heineman father and daughter that he also practices) makes for a brilliantly mortifying 30 minutes.

“Get The Fuck Outta My House, Larry!” Consigned to the floor of the ski lodge during their stay, Larry tries to quietly climb in beside his fake Orthodox wife Susie in the middle of the night. With Jeff quietly accepting his lot on the floor in the next room, Larry screws up and Susie’s reaction is perfectly heartless. “You think I care about your back? Do you know how much I’ve done for you already this weekend? Get the fuck out of the bed!” Whimpering and shivering, Larry tries to explain that he’s cold. “GET THE FUCK OUT OF BED!” Susie makes her point loud and clear.

Vanilla Bullshit Things: Nearing the end of his tether, Lewis straight up tells Larry that he’s counting on him “stepping up” and taking the kidney test at the start of “The Ski Lift.” Before plucking up the courage for that, however, he absently whines to his old friend that his baseball hero Mickey Mantle, whose 500th home-run ball he owns, once got bumped up the list. Without missing a beat, Larry says, “Yeah, well, maybe if you were a bigger celebrity you’d be on the top of the list!” Sometimes the truth hurts but, seeing as Larry and Lewis’ friendship is largely based on being frank with each other, Larry’s scathing observation manages to transcend offense.

He’s Not My Best Friend! Larry rarely holds back when it comes to giving his small yet close circle of friends a piece of his mind. Every time he hangs Jeff out to dry with a cutting putdown or caustic observation? Chances are he’s coming from a good place. When he refuses to change how he acts around Lewis when he’s knocking on death’s door? That’s true friendship. Early on in “The “Ski Lift,” Larry refuses to budge on taking the kidney test for his old friend. After serving him with a putdown of his own, Lewis turns to Larry and says Larry’s sweater is appropriate for an Andy Williams Summer Show. Subtle enough, but also quite scathing.

Stop and Chat: From Hugh Hefner and Gary Player in “The Smoking Jacket” to Rosie O’Donnell in “The Bowtie,” Season Five of Curb You Enthusiasm has its fair share of guest stars cropping up here and there. Though it’s short-lived, comedian George Lopez advises Larry to befriend Ben Heineman, making him quite instrumental in how “The Ski Lift” plays out. “Buddy up to him, kiss his ass. Who knows? He’ll probably bump Richard up the list.” Were it not for, you know, Larry being Larry, he might well have.

Socially Assassinated: When Larry removes his glasses and tells Lewis’ nurse Lisa Thompson, “I think you took the ball, stashed it in your unusually large vagina, and marched right out of here,” the expression on Lewis’ face is an absolute joy to behold. Yes, Larry goes there. In another instance, his accusation would be pretty indefensible. But, seeing how Lisa a.) needlessly tries to convince Larry that her old flame, Jeff “These Big Vagina Ladies Are Getting Away with Murder” Greene is severely under-endowed and b.) did, in fact, steal Lewis’s baseball, Larry’s cell phone and god knows what else, Larry’s audacious claim actually winds up proving to be riotous. Still, if you can manage to watch this scene without your jaw hitting the floor, you’re probably not doing it right.

Get In That Ass: You know you’re really breaking down the walls of social taboo when Larry David — LARRY DAVID — turns to you, with an expression of mild disgust, and utters the words, “Way too much information, ok?” Although he isn’t wrong, when he offers up this counsel to Lisa early on in “The Ski Lift,” one can’t help but think he should consider heeding his own advice now and again.

Pretty, Pretty, Pretty Good: Although Season Five is arguably the weakest of the show’s eight seasons to date, “The Ski Lift” is a masterclass of highlights. Speckled with some exceptional one-liners from Larry, Lewis, Jeff, and others, it’s a by-the-book blueprint of how keeping it fairly streamlined and focusing on two or three narrative arcs is often key to making the finesse of Larry’s writing shine through. Finding LD to be someone who is prepared to adapt a totally new persona in order to shirk responsibility — as a man who offers a starving Orthodox woman edible panties as a snack — this is the definition of a watching-through-one’s-fingers episode.