The Pitch: The story, such as it is, involves the drug trade of American expat Mickey Pearson (Matthew McConaughey, with all the half-lidded energy of his Lincoln commercials) and the convoluted efforts of he and his lieutenants to secure a buyer for his weed empire and fend off those who would horn in on his business. That’s the simple explanation: in Guy Ritchie’s hands, it’s a winding, winkingly self-aware, herky-jerky spin through flashbacks, flights of fancy, and the honey-tongued whimsy of campy private investigator Fletcher (Hugh Grant), who narrates all this to Pearson’s right-hand man Raymond (Charlie Hunnam) one fateful night.

Beep Beep, Ritchie: Like a lot of edgy filmmakers of the ’90s and 2000s white kids (like me) idolized in their childhoods, Guy Ritchie has been faced with one of two choices in the intervening years: adapt or die. Tarantino, for instance, recalibrated his encyclopedic genre knowledge into more reflective works of revisionist history (Inglourious Basterds, Django, Once Upon a Time in… Hollywood) that made use of his skills in ways that evolved his career. Ritchie’s had a bumpier road, thrilling with fun, ramped-up adaptations like his two Sherlock Holmes films and the severely underrated The Man from U.N.C.L.E. but alternating them with dreck like his King Arthur movie and his journeyman work on Aladdin. But with The Gentlemen, Ritchie tries to go back to the days of angry, misanthropic mockney gangster films like Lock, Stock, and Two Smoking Barrels and Snatch, bringing the good and the bad along with him.

Right off the bat, one gets the feeling that Ritchie is struggling to recapture the wild-eyed devil-may-care toughness of his filmmaking youth. The Gentlemen (originally conceived as Toff Guys) has all the gleeful vulgarity and bloody double-crosses of his early films, but little of their authenticity. It’s a cartoon, and gleefully so, right down to what passes for the film’s structure. 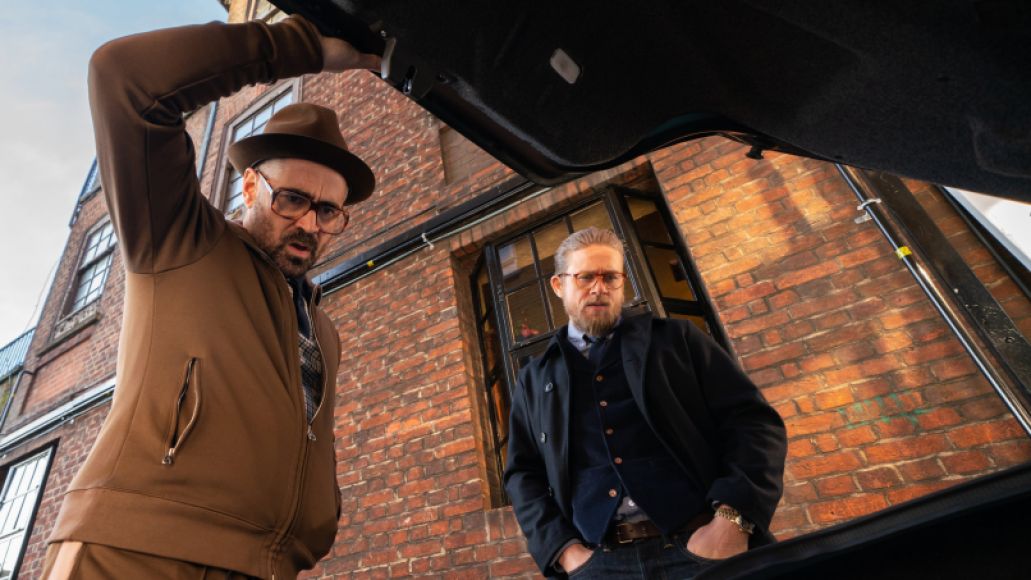 Snatch-ed Lewks: In fits and spurts, The Gentlemen crackles with the energy of its predecessors: Ritchie’s gift of gab sometimes hits right on the mark, and his cast of spirited performers often gets his energy right on the mark. Grant’s having the time of his life, of course, gurning and gesticulating with all the hammy verve of his character from Paddington 2. Hunnam, for his part, plays it close to the chest before coming alive in a genuinely fun chase through a council estate to grab some incriminating cell phone footage. And there’s Michelle Dockery, vamping it up in eight-inch Louboutin heels as Pearson’s wife, chewing up Ritchie’s wordy dialogue and spitting it out through an arch Cockney accent with tremendous verve.

But amongst the highs, there are as many lows — and boy, do they get low. It’s disorienting to grin at the whirling-dervish energy on display in one scene, only to get immediately lost in another plot point or an unrelated sub-story. Ritchie’s script delights in its own cleverness, but its often too clever for its own good. What’s meant to be layered just turns out episodic, and the entire enterprise is based around a tall tale whose embellishments are impossible to pick out. A winking denouement with Ritchie himself at a building with a big ol’ Miramax logo on the front feels particularly tone-deaf. 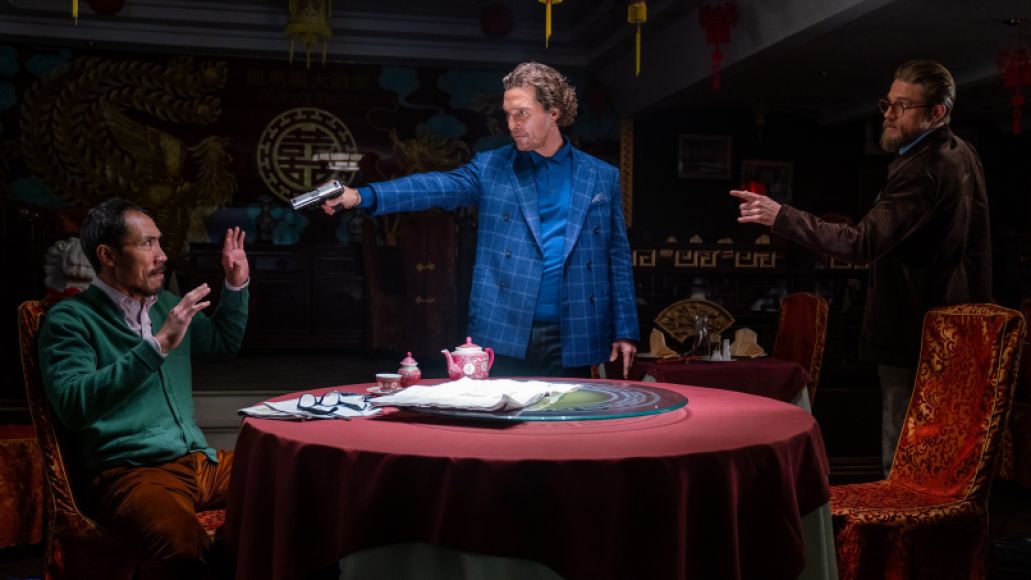 Lads Say the Darndest Things: And, of course, there’s the racism. Look, I know the drill, depiction doesn’t equal endorsement, yadda yadda yadda. But for as much as The Gentlemen recognizes that its characters aren’t good people, Ritchie practically punches the air with how edgy he thinks his racially-tinged jokes are, especially where they concern the film’s Chinese characters. Henry Golding‘s Chinese underboss Dry Eye is capably played, but it’s hard to enjoy him when characters lob a million epithets at him (Fletcher describes him as “a Chinese James Bond….ricense to kill”), and Christopher Benstead’s score lays on the chimes and drums whenever more than one Asian character is on screen.

Extended riffs on how one Asian character’s name (Phuc) sounds like “fuck” abound, and Pearson explains to Dry Eye’s boss in an extended monologue about how his people’s drug (heroin) kills, but Pearson’s drug (weed) doesn’t. Also, guess which character comes closest to raping a woman on screen?

The mean-spiritedness of the film’s attitude doesn’t just extend to its East Asian population, though. Farrell spends an entire scene explaining to one of his students (British rapper Bugzy Malone) why another person calling him a “black c*nt” isn’t racist, it’s “a term of endearment.” Grant’s Fletcher lays the homoerotic come-ons pretty thick to Raymond throughout their interactions, and Succession’s Jeremy Strong completes the trifecta as a swishingly gay American Jew who wants to buy Pearson’s business. Strong plays him with a single note, but at least it’s a consistently silly one and cements the film’s erstwhile status as a double feature with Serenity. 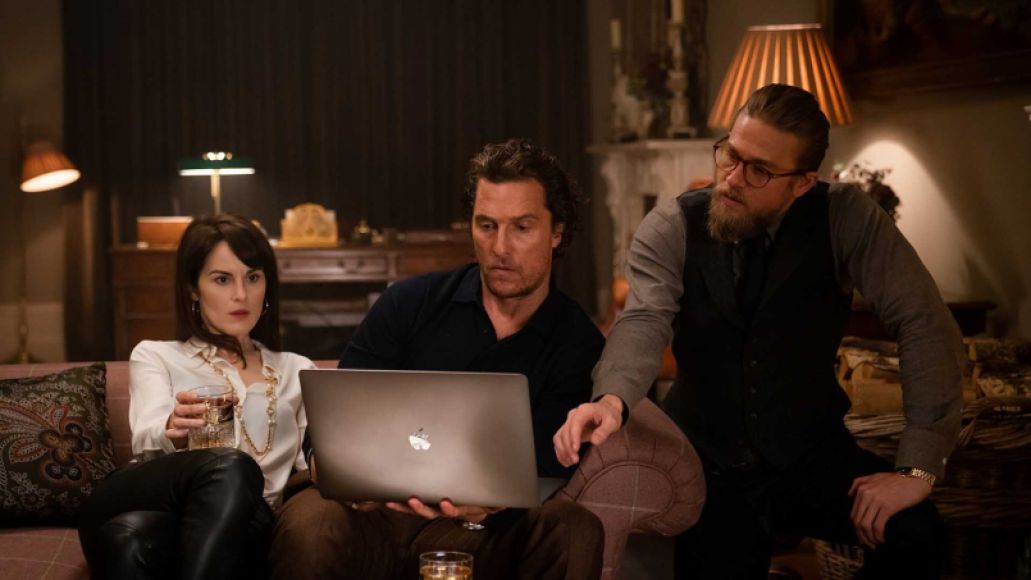 It’s hard to list these things in order without seeming like a scold, but a movie that wants to traffic in this kind of commentary has to at least get it right, and The Gentlemen decidedly flubs that mission. Even in the mouths of actors who can make anything funny (Farrell’s never had better comic timing than in his native Irish accent; see In Bruges for concrete evidence), this kind of hard-boy dialogue feels antiquated and feels sour on the tongue and in the ear. Even McConaughey feels a bit uncomfortable with the situation, and he’s playing a rich guy who’s really into weed. He shouldn’t even have to act!

Verdict: Perhaps, in a movie that used its admirable style to more consistent effect, there might be a way to forgiving at least some of those trespasses. But in something as herky-jerky and convoluted as The Gentlemen, the viewer has enough to worry about keeping the whole story straight without dreading the next tone-deaf thing to come out of an esteemed character actor’s mouth. Watching The Gentlemen feels like going to your rich, kinda racist uncle’s house: Sure, his place looks nice, and he lets you play his PS4, but you’ll always be steeling yourself for the next time he says “colored” at the dinner table.

Where’s It Playing? The Gentlemen winks at you before serving up a florid, racially-tinged monologue through a thick Cockney accent in theaters January 24th.

Film Review: The Gentlemen Are the Wrong Kind of Lads