Another Adaptation: Henry James’ The Turn of the Screw has been adapted so many times, it’s hard to keep track — in 2020 alone, we’re getting two of them! Unfortunately for Universal and Dreamworks, Floria Sigismondi’s long-delayed The Turning embodies damn near every element of its cursed release date, and is a studio hack job of the highest order, despite a promising start.

After a pre-credits sequence highlighting the first governess’ attempted escape from the infamous manor, we meet Kate (Mackenzie Davis, doing her damndest with a rough script), a schoolteacher who has just decided to move to the middle of nowhere to take a job as a private tutor to a young orphaned girl named Flora (Brooklynn Prince of The Florida Project) because her last teacher…hey, remember that pre-credit sequence?

It’s not long before she meets MIles (Finn Wolfhard), Flora’s teenage brother who was just expelled from boarding school due to a violent outburst, and when he starts to give her trouble, she feels that she’s in over her head. Is it the kids who are tormenting Kate, or something far more sinister and supernatural? 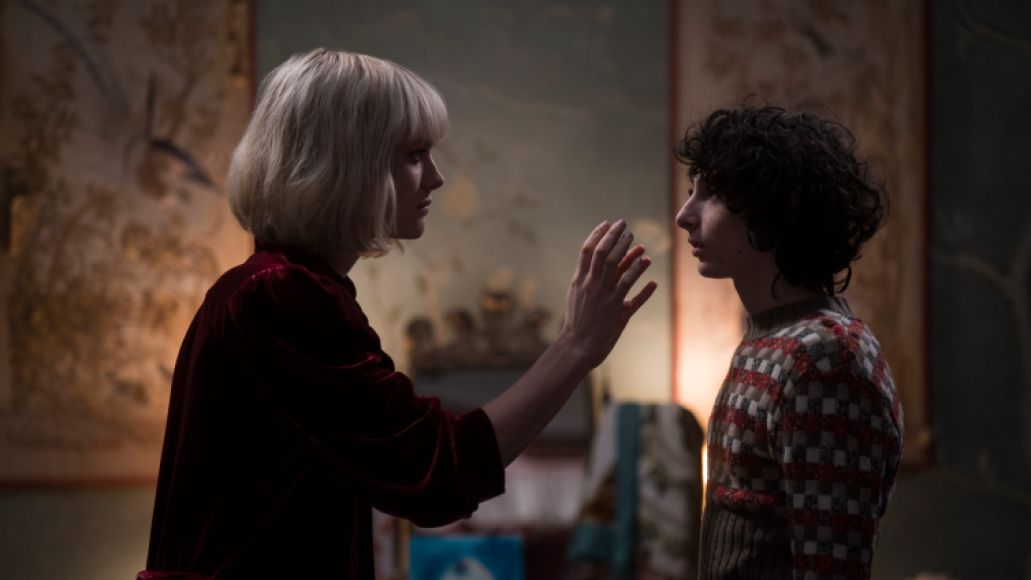 A Troubled Past: The film’s production history is disastrous — it began in 2016 under the title Haunted and was set to feature Game of Thrones star Rose Leslie. But, five million dollars into its development, and just weeks before filming, Dreamworks pulled the plug in order to work more on the script, and soon the whole damn process was restarted. The title was changed to The Turning, a new cast was attached, and music video director Sigismondi of The Runaways was on board. The finished film was scheduled for release in early 2019, then delayed for a year. And, well, there it is.

I Love the ’90s: The Turning aims to set itself apart from the pack by attempting a more “modern” update of the novella from the late 1800s, setting the story in 1994, for some inexplicable reason that never pays off, and making sure we know it. Look, Kurt Cobain just killed himself! There’s a car! A phone! Finn Wolfhard noodles on an electric guitar! This writer kept waiting for some revelation that would justify the period and never got one. Oh well. 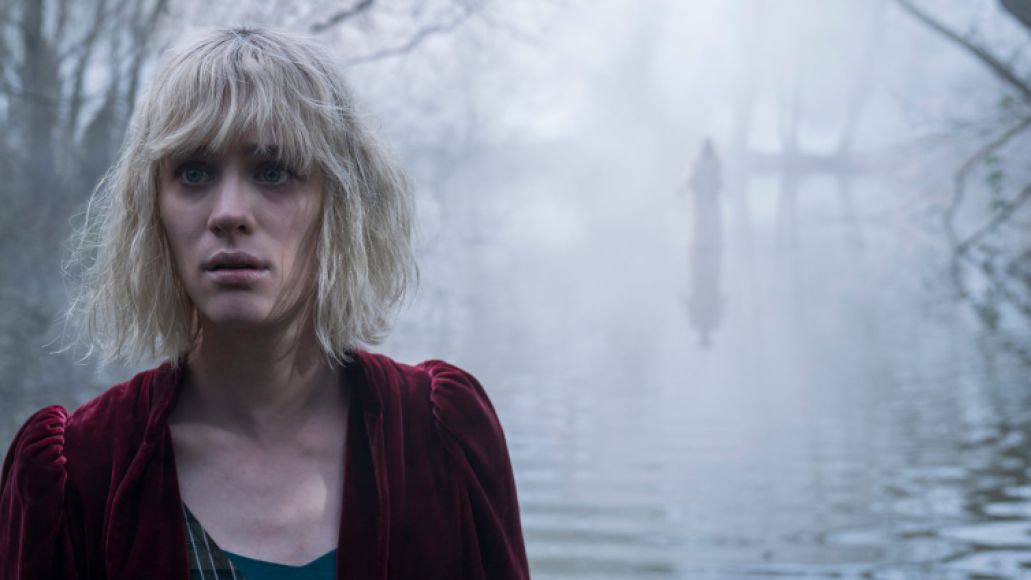 Is It Really That Bad? The Turning bites off more than it can chew. The screenwriters, for a while at least, do a great job of grafting contemporary issues (#MeToo, toxic masculinity, the gall of spoiled rich kids) onto this ancient story, but a baffling decision up-top reverberates throughout the film, rearing its ugly head as predicted in the end, and several more strange choices really mar the experience.

The set-up of the children is admittedly great; they’re introduced as “thoroughbreds” and highlighted as obnoxious children of privilege. On paper, the idea of the past relentlessly finding its way to influence the future should work, particularly the exploration of adult role models’ lasting effect on children’s behavior. And again, it’s all teed up: Kate and Flora have a shared traumatic history, and there’s even an appropriate juxtaposition between the colorful Kate and the greying Mrs. Grose, the older woman who also lives at the mansion and has seemingly been there forever.

Unfortunately, everything gets a passing mention, and these ideas are underdeveloped in lieu of having Mackenzie Davis experience scary dreams. Or are they dreams? There’s also a horribly convenient subplot inserted about Kate’s insane mother, and, of course, it comes back at a crucial moment to undermine literally everything that came before it. The movie basks in its dubiousness, offering one explanation, then another, then another, in hopes that one of them will work for you. Are the children possessed? Are there really ghosts? Is Kate just fully insane? Did the movie really just show me a ghost rape scene that has the same energy as Scary Movie 2?

These are just a few of the lingering questions that haunt this writer. 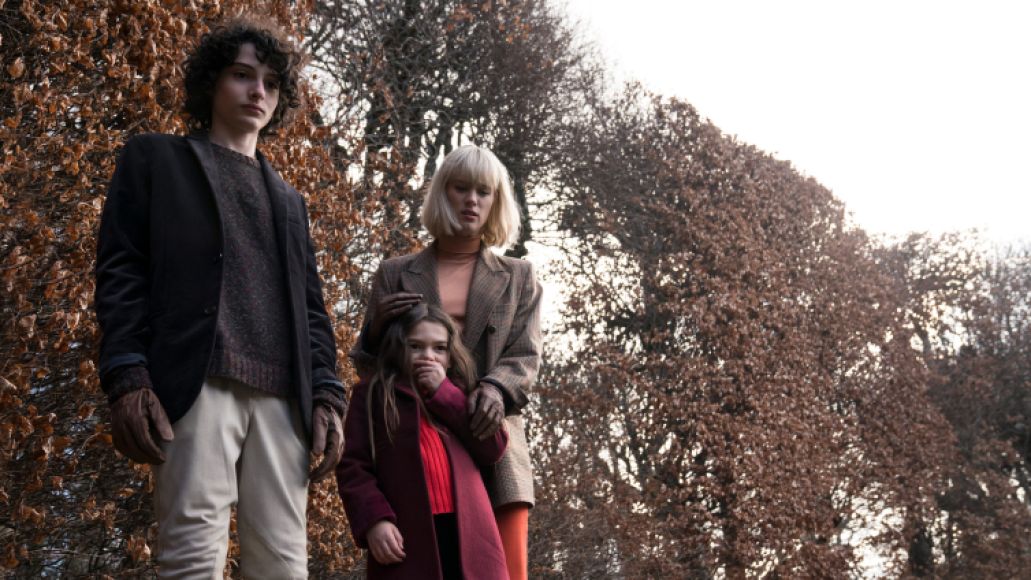 The Denouement: The movie ends so abruptly, you’ll think the projectionist forgot to add in a reel. There isn’t even a third act! It does a *freeze frame, rewind, that’s me, I bet you’re wondering how I got into this situation* heel turn, and then insults the viewer with a different version of the events we just saw play out. It’s not just insulting, but deeply confusing, and the entire audience this writer saw it with laughed hard at the reveal, or rather, the lack of one. It’s The Snowman-level of unfinished, and it’s truly wild that Universal is putting this into theaters as it exists.

The Verdict:The Turning is everything you’d expect from a PG-13, late-January horror release with a belabored production history. It’s a damn shame, too. The mood and atmosphere is appropriately unsettling, and the stellar cast never stops trying to elevate the material, all of which makes it even more upsetting to watch as it slowly unravels and botches the landing. In the end, The Turning tries, and fails, to adapt all interpretations of the famously ambiguous source material as opposed to highlighting any one compelling thread. Here’s hoping Netflix’s The Haunting of Bly Manor, Mike Flanagan’s follow-up to his terrific Hill House, fares better and manages to deliver on the rich premise of The Turn of the Screw.

Where’s It Playing? The Turning hits theaters on January 24th.

Film Review: The Turning Is the Ultimate January Horror Dump