Did you feel gross about watching the 62nd Annual Grammy Awards because you just found out — insert feigning shock meme — the Recording Academy might be a boys club rife with misconduct and nominations may be “rigged”? Don’t worry, we watched ’em for you.

Of course, as everyone knows, it’s not always about the music, it’s about the moments. That’s why the true winners were us last night — and we knew how to party. Be it memes, tweets, GIFs, or endless hot takes, there was no wrong way to celebrate.

This year, however, took on a more serious tone in the wake of Kobe Bryant’s tragic death only hours prior to the ceremony. As you’ll see below, there were homages, there were tears, and there were memories shared. In that sense, Music’s Biggest Night became something of a communal wake.

Grammys 2020: Watch All of the Performances

So, in the spirit of enjoying an award show in the only way we, the Internet-obsessed, know how to, we present to you the highlights you may have missed.

Tyler the Creator Has One Hell of a Closet

Paging Mr. Herman: Tyler the Creator won the threads war on Sunday night with his immaculate bellhop getup. Equal parts Big Adventure and Grand Budapest Hotel, the IGOR mastermind made us all rethink what we should be doing with our luggage. To think, this was just the tip of the iceberg when it came to the Grammy winner’s wardrobes. –Michael Roffman

Maggie Rogers Told a Story With Her Dress

maggie rogers carrying her stainless steel water bottle in a chanel carrier is a fucking mood. we stan an environmental queen pic.twitter.com/kRW2YKORHZ

Whereas Tyler’s bellhop suit screams for a story, Maggie Rogers’ outfit actually told one. By wearing a vintage 2013 Chanel dress, the Best New Artist nominee was making a subtle nod to the year she went to Alaska and wrote her titular hit. Couple that trivia with her Chanel water bottle carrier, and, well, like casey tweets above: it was a mood. –Michael Roffman

Lizzo Set the Tone of the Night

@lizzo kilt the opening at the #GRAMMYs

She got her thick ballerina's yall pic.twitter.com/K8IT0HFZ9x

Out of respect for the late Kobe Bryant, Lizzo opted out of doing any red carpet interviews, despite being waved over and despite having the most nominations of the night. Needless to say, she saved her award-winning pipes to get the party started, which she did in a big way by performing both “Cuz I Love You” and “Truth Hurts” to open the night. (The latter saw her wearing a super swanky glow-in-the-dark suit. We’re jealous.) She also got the first word in on the NBA MVP, saying what everyone thought in the Staples Center: “Tonight is for Kobe. I’m crying ’cause I love you.” Swish. –Michael Roffman

Host Alicia Keys added more weight to Lizzo’s words by paying further homage to Black Mamba. “We’re literally standing here heartbroken in the house that Kobe Bryant built,” she said, visibly heartbroken. To everyone’s surprise, Keys was then joined by R&B juggernauts Boyz II Men, and the four sang an impromptu performance of “It’s So Hard to Say Goodbye to Yesterday”, tragically changing the lyrics to “today.” It was a hell of a Hail Mary homage for one hell of a legend, whose death still hasn’t truly registered. For anyone. –Michael Roffman

Lizzo Was the Only One Not Rooting for Lizzo

Lizzo prayed for Beyoncé to win, and yet we all prayed for Lizzo to win. #prayersanswered –Michael Roffman

A shocked Lizzo punctuated her acceptance speech for Best Pop Solo Performance with expletives while talking about how this week — particularly, in the wake of losing a hero like Kobe Bryant — taught her that some problems are small and that music is the beginning of liberating people. “Let’s continue to reach out, hold each other down, and lift each other up.” Duly noted. –Erica Campbell

Longtime Prince collaborator Sheila E. and blockbuster R&B star Usher honored the Purple One with a special medley of “Little Red Corvette”, “When Doves Cry”, and “Kiss”. Joining them for the tribute was FKA twigs, who began the performance with her signature pole dancing. But that was it. There was no singing from the Magdalene star, and while that prompted several fans to bemoan her lack of a vocal performance, one might argue less is more. –Erica Campbell

Flava Flav Is Probably Heading to Vegas for Aerosmith

Flava flav gettin down to aerosmith and run dmc on the grammys is the highlight of 2020 rn hahahah pic.twitter.com/PGFp39lLRF

Lil Nas X Wired a Message Into a Meme

Just when you think he couldn’t possibly top himself, Lil Nas X, well, went ahead and topped himself. In what could best be described as a culmination of his record-breaking year, the rap superstar delivered the most star-studded performance of “Old Town Road” yet, inviting out K-pop masters BTS, country veteran Billy Ray Cyrus, DJ and producer Diplo, country music sensation Mason Ramsey, and, yes, the other Nas. (Or, as he put it, Big Nas.) The fact that it all played out on a revolving stage straight outta Pee-wee’s Playhouse — seriously, what’s with all the Herman allusions last night? — made it all the more meme-worthy. But when you look past the seemingly unruly juxtapositions, and really think about what’s going down, you start to see an affecting portrait of how the blockbuster anthem has become an unlikely source of unity. Won this cynic over. –Michael Roffman

Demi Lovato Made a Triumphant Return

For her first performance in two years, Demi Lovato returned with a tearful rendition of her new single, “Anyone”. Knowing that she wrote and recorded the song only four days before she suffered a drug overdose in 2018 made the lyrics all the more affecting. “Anyone, please send me anyone/ Lord, is there anyone?/ I need someone,” she sang with stunning vulnerability. The emotionally charged moment stopped the room; that is, until everyone gave a sweeping standing ovation in awe and support. It was something. –Erica Campbell

Tyler the Creator Got Real 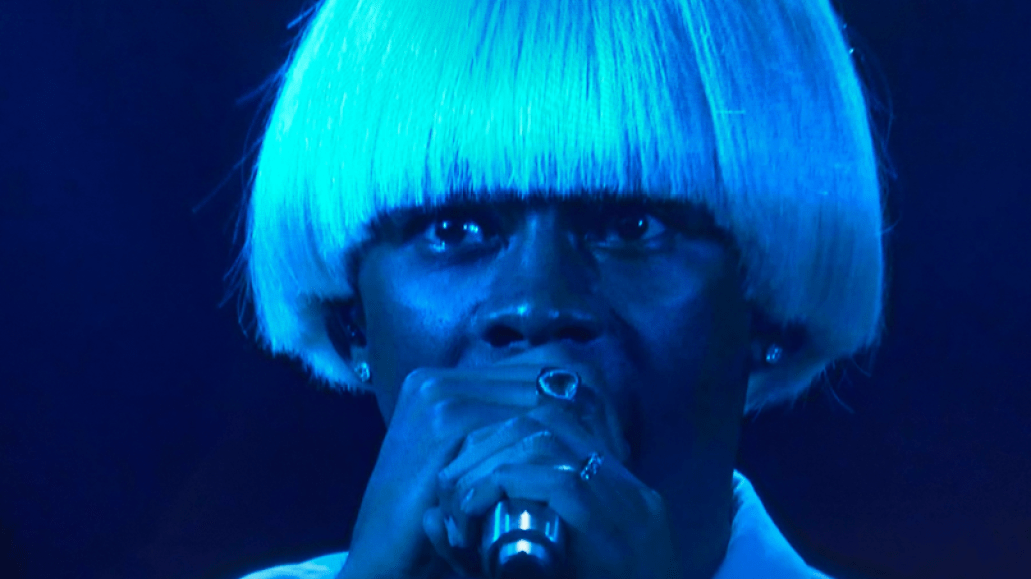 Tyler, the Creator at the Grammy Awards 2020

After taking home Best Rap Album for IGOR, and performing with Charlie Wilson and Boyz II Men for a medley of “Earfquake” and “New Magic Wand”, Tyler, the Creator shared his complicated feelings on the win. “I’m half and half on it,” he admitted. “On the one side, I am very grateful that what I made can be acknowledged in a world like this, but it sucks that whenever we, and I mean guys that look like me, do anything that’s genre-bending or anything, they always put it in a rap or urban category.” On the word “Urban”, he added: “It’s just a politically correct way to say the n-word, to me. So when I hear that, I’m just like, why can’t we just be in pop? So I felt like — half of me feels like the rap nomination was a backhanded compliment.” ‘Nuff said. –Erica Campbell

The loss of Nipsey Hussle was not lost on the Grammys. The life and legacy of the late rapper was on full display with moving tributes by John Legend, DJ Khaled, Meek Mill, Kirk Franklin, Roddy Ricch, and YG, but also two posthumous wins for Best Rap Song (“Racks in the Middle”) and Best Rap/Sung Performance (“Higher”). The latter win also earned DJ Khaled a Grammy, giving new meaning to his 2006 hit “Grammy Family”. –Michael Roffman

Billie Eilish Became the Youngest Artist to Sweep the Grammys

At just 18, Billie Eilish made history by becoming the youngest person to be nominated for and subsequently win awards in all major categories: Best New Artist, Album of the Year, Song of the Year, and Record of the Year. Eilish was clearly just as shocked by the honor, even mouthing, “Please don’t be me, please don’t be me,” as she picked up one of her last trophies of the night. Both “bad guy” and When We All Fall Asleep, Where Do We Go?  won all but one of the seven awards they were nominated for in a staggering sweep. Accepting the award for Song of the Year, Eilish shared, “So many other songs deserved this, I’m sorry.” Her brother and producer, FINNEAS, shared a similar sentiment, saying, “We didn’t write an album to win awards, we wrote an album about depression, about suicidal thoughts, about climate change. We stand up here confused and grateful.” –Erica Campbell

The Grammys Got It … Right?

Not gonna lie: This year’s slate of winners is pretty, pretty… pretty good, especially if we’re going by our 2019 Annual Report. As you just read, Artist of the Year Billie Eilish swept all major categories, winning Album of the Year, Song of the Year, Record of the Year, and Best New Artist. Our Live Act of the Year Lizzo won three with Best Solo Pop Solo Performance, Best Traditional R&B Performance, and Best Urban Contemporary Album. And our Band of the Year Tool managed to snag a Best Metal Performance win for a song that’s 15 fucking minutes long (see: “7empst”).

So, yeah, not too many complaints here. –Michael Roffman