I rejoiced in 1998, when I, a third grader with blunt bangs, found out that Titanic swept the Academy Awards with 11 wins. I say “found out” because my parents made me go to bed after the first hour of the ceremony. Despite the film’s many victories, I was a little bit upset that my future husband, Leonardo DiCaprio, did not win Best Actor. But I was a child, and unaware that DiCaprio wasn’t even nominated. I also hadn’t seen the movie, and wouldn’t for another six years. Looking back, this was the only year of the Oscars I remember being satisfied with most for any of the nominations and wins in major categories. (Well, besides 2008, which isn’t to the Academy’s credit, but mostly because 2007 was a perfect year in film.) This means I have been angry about the Oscars for most of my life. And yet, every year, I have hope that things will get better.

But every year, the same thing happens. The nominees are announced — criminally early in the morning, no less — and I get angry about them. Along with a whole lot of other people. Then the award show happens over the course of a late, painful three-hour televised program. And more often than not, the winners are the ones who people outside the industry believe deserve it. In hindsight, though, most of the Oscar winners in major categories are an embarrassment — to you, to me, and probably to the winners themselves. (Do you really think Sandra Bullock talks about her win for The Blind Side in 2020, or ever wanted to talk about her win for The Blind Side?) And yet, after all these decades, most people outside the industry look to the Oscars to figure out what’s best, and what’s been the best.

Except, the Oscars rarely reflect the best, and the Sympathy Oscar has a lot to do with it. Because until the Academy stops its relentless pattern of rectifying its mistakes by awarding deserving talent for undeserving performances and films, Oscar nominees and winners will never truly represent what’s the best and most deserving of any given year. Alas, here we are in 2020, and this pattern, unfortunately, continues. Mostly because it’s a never-ending cycle that continues to feed itself. Think about it: Every time someone wins a Sympathy Oscar, someone else gets snubbed, and on a long enough timeline, that snub will then one day turn into a Sympathy Oscar, and yadda, yadda, yadda, rinse and repeat.

Look, I could go on for longer than The Irishman about talent who won their Oscars for the wrong movie. And yet, no matter how much effort I put into it, someone will likely point out someone that I missed: “What about Denzel Washington, who won for Training Day instead of The Hurricane?” “Don’t forget Russell Crowe, who totally won for Gladiator because American Beauty decimated The Insider.” And so it goes. Basically, know that while the Sympathy Oscar may feel like a recent phenomenon, it actually started long, long ago in the Academy’s history.

— Every year between 1958 and 1961, Elizabeth Taylor received a nomination for Best Actress. But she didn’t win until 1961, and for her performance in Butterfield 8, a not-so-great film that she later even admitted “stinks.” Here’s the rub: Taylor didn’t really win because her performance was the best, or because she’d been nominated four years in a row. It was the context, the narrative, the Academy’s judgement of her personal life: At the time, she wasn’t the ideal representation of American women; she was the woman who stole Eddie Fisher away from American sweetheart Debbie Reynolds. And yet due to a death scare, and an emergency tracheotomy in late 1960 while filming Cleopatra, the Academy voted in her favor, namely because they felt bad that she almost died. And because they most likely felt bad she almost died without an Oscar.

— Paul Newman, like Taylor, was nominated for his first Oscar in 1958. Except poor Paul, despite looking this good on a horse for decades, didn’t receive his first Oscar until 1985 when he was given the Academy Honorary Award. A year later, Newman won his first Oscar for his role in Martin Scorsese’s The Color of Money. Granted, the face on my salad dressing deserved this win, but let’s be real, he also deserved many more well before this one.

— Years before Leonardo DiCaprio became a teenage heartthrob, he received his first Oscar nomination for his supporting role in 1993’s What’s Eating Gilbert Grape?. He didn’t win, as most Oscar children never do, but the loss solidified his position as an Actor Who Will Win an Oscar One Day. And it was a long journey for our ol’ Romeo: In fact, Leo wouldn’t receive his second nomination until 2005 for his role as Howard Hughes in Scorsese’s The Aviator, which he also lost. That’s okay because he was back in contention two years later not for his harrowing performance in 2006’s The Departed, as everyone had presumed, but for his accented turn in Blood Diamond. No matter, he lost that, too, and he would feel the burn again in 2013’s The Wolf of Wall Street. Finally, after all those years, the Oscars decided to right their wrongs by giving him the gold for 2015’s The Revenant. And while I admire DiCaprio’s commitment to playing a man who got mauled by a bear (and Mother Nature), that film’s only legacy will be that it was brave enough to partially show Tom Hardy’s face (partially because he has a big beard).

— Speaking of Scorsese, it was Marty who directed Newman to his first win, and it was Marty who led DiCaprio to two of his six Oscar nominations, and he similarly faced a long road to redemption with the Oscars. Despite being one of the most groundbreaking directors of all time, Scorsese only has one Oscar win to his name — for 2006’s The Departed — and a whole lot of oversights and snubs. The most notable of the latter is arguably when he lost Best Director for Goodfellas to Kevin Costner for his directorial debut Dances With Wolves. No shade to Robin Hood, but in the decades since, it’s obvious which film has made a larger cultural dent, and the Oscars clearly realized this in 2007. Even in the moment, it was pretty apparent that Scorsese was given the Oscar because, well, just watch for yourself…

— Often, though, the Sympathy Oscar gets an upset, and the most recent instance came last year with Glenn Close for her performance in The Wife. Given her win at the Golden Globes, the veteran actress was a favorite going into the 2019 ceremony. And yet, Olivia Colman came out on top with a win for her outstanding role in The Favourite. To her credit, Close deserves a win, but she also doesn’t deserve it for simply appearing in a movie. Until Close delivers something on par, or at least comparable to her turn in Dangerous Liaisons or Fatal Attraction, the Academy should let this go, and acknowledge they did Close wrong instead of trying to right that wrong with another one.

The Oscars mean different things to everyone. To me, the Oscars are an excuse to complain online. For anyone working in the film industry, an Oscar is the highest honor from their peers. (Sure, an Indie Spirit Award is cute, but the show with no host is still the biggest one in town). And to many, an Oscar represents history. But because of the Academy’s shotty (a compliment) voting history, it’s completely failed to represent film, history, and culture in a meaningful way. What did The King’s Speech have to say about 2010 — that Colin Firth is good? What did The Artist have to say about 2011 — that dogs are cute? And what did Green Book have to say about 2018? I won’t answer that.

Saying goodbye to the Sympathy Oscar will not be easy. The Academy’s voting body needs to think about the year in film, and not the history of film, or an actor’s history, or a director’s history. But there’s evidence that we’re far from it. Every year, The Hollywood Reporter publishes unhinged interviews with anonymous Academy voters. In its most recent Brutally Honest Oscar Ballot interview, an actress and Academy voter wrote that she hated The Irishman, didn’t like Little Women because a majority of its cast aren’t from America, doesn’t think that Parasite should be nominated because it’s an international film, ad picked Brad Pitt as the winner in the Best Supporting Actor category “because he has never won.” 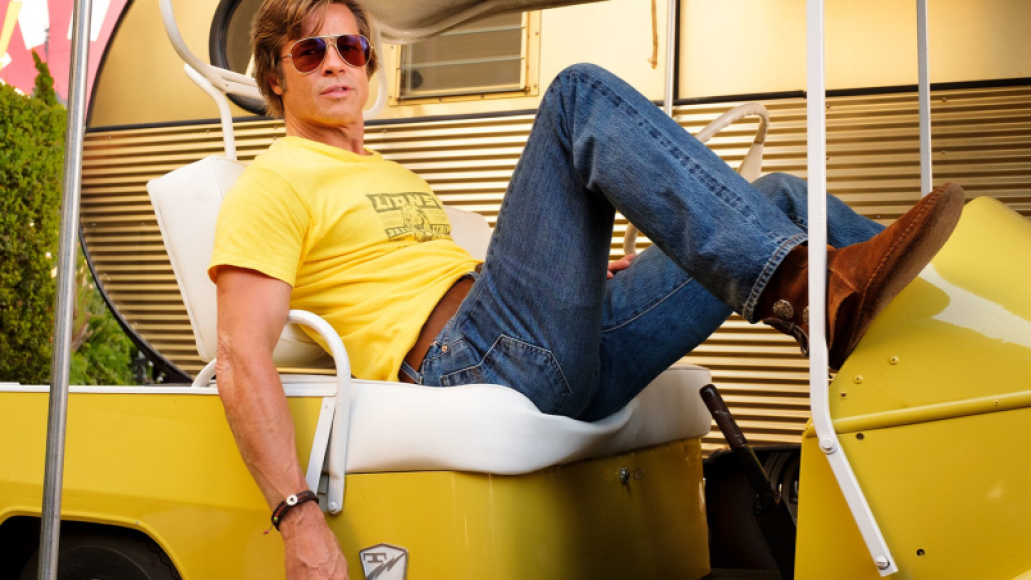 Brad Pitt for Once Upon a Time . . . in Hollywood, photograph by Andrew Cooper/©2019 Sony Pictures Entertainment.

Yes, Pitt is the deserved frontrunner in this category for his role as Clint Booth — a middle aged stuntman in Once Upon a Time in Hollywood — but for a professional actress, who has a say in who wins an Oscar, to be incapable of describing a compelling reason why an actor who delivered a performance as interesting as Pitt’s should win is astonishing. It’s also evidence that the Sympathy Oscar runs rampant. Even Joaquin Phoenix, a shoe-in for Best Actor for his titular performance in Joker, is getting votes because he didn’t win for Walk the Line, The Master, or Her.

In real life, people make mistakes all the time. And in real life, we apologize and move on from them. The Oscars are one of the furthest things in real life from real life. But it’s time the Academy treated its mistakes similarly. To end this mad cycle and give the Oscars the relevancy it needs (and craves as ratings continue to decline), Academy voters have to let go of their errors. If the Academy voters feel bad that they allowed Olivia Colman to steal yet another Oscar away from Glenn Close, well, they have to live with that. Again, Close should win an Oscar, but she shouldn’t win an Oscar for simply being in something. Looking ahead, The Academy’s push to diversify its voting body could (and should) solidify this change, but the decades-long history of the Sympathy Oscar admittedly doesn’t provide much hope.